Here’s a startling truth. I can make you fat. Actually, I can make anybody fat. How? I simply prescribe insulin injections. Giving people extra insulin leads inevitably to weight gain. In type 1 diabetes, when insulin levels are extremely low, patients lose weight no matter how many calories they eat. Give insulin – gain weight. No insulin – lose weight (even to the point of death). The implication is clear. Insulin causes weight gain. Knowing this is crucial, because if insulin causes weight gain, then losing weight depends upon lowering insulin. But instead, we’ve been told to focus obsessively on calories.
The standard (failed) weight loss advice is to restrict a few calories every day by reducing dietary fat and eating multiple times per day. This does not lower insulin much since dietary fat has little insulin effect and eating frequently constantly stimulates insulin secretion. This ‘caloric reduction as primary’ advice has an estimated failure rate of 99.5%. So, if you have tried calorie restriction to lose weight and failed, understand this. You were expected to fail.
So here’s the situation. ‘The Man’ tells you that obesity is a caloric balance and that you should eat less and move more. ‘The Man’ tells you to eat a low fat diet, and to eat 10 times a day. This advice fails virtually everybody. When you fail, ‘The Man’ tells you it’s your own damned fault for being such a lazy assed, floppy willed person. His advice was good, ‘The Man’ tells you. You were just a failure. That’s what ‘The Man’ wants you to believe.
Imagine, though we have a classroom of 100 pupils. One fails. It’s likely his fault. Maybe he played too many video games. But if 99 students fails, then it’s not a problem with the students. The problem is with the teacher. In obesity, the problem of rampant obesity means that it is very obviously not the fault of the people. The fault lies with the official dietary advice.
Understanding that obesity is a hormonal disorder, not a caloric imbalance (as discussed in our last post) means that we must instead focus on the insulin effect rather than the number of calories to successfully lose weight. Reducing insulin depends mostly upon 2 things:

We often think and talk about the first problem, but both are equally important in lowering insulin levels.

The three different macronutrients stimulate insulin to different degrees. Carbohydrates, particularly refined carbohydrates raise insulin the most. Protein also raises insulin significantly, although blood glucose remains stable. Animal proteins stimulate more insulin release compared to plant proteins. Dietary fat raises neither glucose nor insulin.
Most natural foods contain varying combinations of the three macronutrients and therefore raise insulin to varying degrees. For example, refined carbohydrate rich foods like cookies have the greatest effect on raising insulin and glucose. Fat rich foods like salmon have little effect on insulin. This differing ability to stimulate insulin means that foods also differ in their fattening effect. This is only common sense. 100 calories of cookies, is far more fattening than 100 calories of salmon, despite what all the obesity ‘experts’ claim.
The overlap between calories and insulin effect is what causes the confusion between the hormonal (insulin) hypothesis of obesity and the caloric hypothesis of obesity. Many people say that ‘A calorie is a calorie’, which is, of course, true. But that’s not the question I asked. The question is ‘Are all calories equally fattening’? To which the answer is an emphatic no. Insulin stimulating foods like glucose are more fattening than non-insulin stimulating foods like kale, even if you have the same number of calories.
Certain factors increase insulin which encourages weight gain. The most important factors raising insulin are refined carbohydrates, animal proteins, and insulin resistance.  Fructose, from added sugar and fruits can directly cause fatty liver and insulin resistance. This leads the body to increase insulin secretion to compensate.
Other factors decrease insulin, protecting against weight gain. Acids found in fermented foods (sauerkraut, kimchee) and vinegar lowers the insulin effect of foods. Animal protein causes secretion of incretin hormones that slows absorption of foods thus lowering insulin. Thus meat has both pro- and anti- insulin effects.Fibre also has this same effect of slowing absorption and insulin effect. 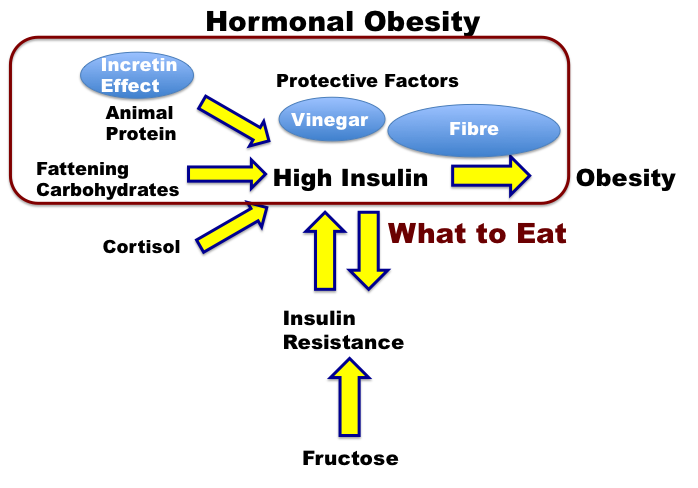 Thus, the main principles for lowering insulin and losing weight would include the following, as detailed in The Obesity Code.
Rules for ‘What to Eat’

Funny. That’s precisely the sort of no-nonsense advice your grandmother would have given.

The second and equally important part of lowering insulin is understanding the question of ‘when to eat’. All foods can raise insulin, which leads to obesity. But there is another important contributor to high insulin levels outside of food – insulin resistance. This refers to the situation where normal insulin levels are unable to force the blood glucose into the cells. In response, the body raises insulin in a knee-jerk reaction to ‘overcome’ this resistance, and these high levels will drive obesity. But how did insulin resistance develop in the first place?
Our body follows the biologic principle of homeostasis. If exposed to any prolonged stimulus, the body quickly develops resistance. A baby can sleep soundly in a crowded restaurant because the noise is constant, and the baby has become noise ‘resistant’. But that same baby, in a quiet house, will wake instantly at the slightest creak of the floorboards. Since it has been quite, the baby has no ‘resistance’ against noises and thus awakens quickly.
If you listen to loud music constantly, you will become slightly deaf. This ‘resistance’ to loud noises protects the ear from damage. Raising the volume to ‘overcome’ this resistance works but only temporarily. Volume increases and you become progressively more deaf (resistant to loud noise), which leads you to raise the volume again. The solution is not to keep raising the volume, but to shut it off.
Think about the story of the boy who cries wolf. Raising the alarm constantly may work at first but eventually leads to the villagers becoming resistant to the signal. The more the boy cries, the less effect it has. The solution is to stop crying wolf.
Insulin resistance is simply a reaction to too much insulin. The body compensates by raising insulin, but that only makes things worse because higher insulin levels lead to more resistance. This is a vicious cycle.

The end result is higher and higher insulin levels, which then drives weight gain and obesity. Therefore, a high insulin level depends on 2 things.

Providing extended periods of low insulin levels can prevent the development of insulin resistance. How to provide those low levels? A daily period of fasting.
This may sound strange, but this is the way we used to eat. Suppose you eat breakfast at 8 am and dinner at 6 pm. You eat for 10 hours of the day and fast for 14 hours. This happens every single day, and the reason we use the word ‘break-fast’. This is the meal that breaks our fast implying that fasting is simply a part of everyday life. The body spends roughly equal portions of every day in the fed (insulin high, storing fat) and the fasted state (insulin low, burning fat). Because of this nice balance, weight tends to stay stable over time. Up until the 1980s, this was pretty standard practice and obesity was not a big issue.
Somehow, we moved away from this traditional way of eating and now eat constantly. We are hounded to eat something the minute we get out of bed in the morning whether we are hungry or not, believing that eating white bread and jam is better than eating nothing at all. We are pestered to eat throughout the day and not stop until it is time for bed. Large surveys show that most Americans eat 6-10 times per day. Now our body spends the majority of time in the fed state, and we wonder why we can’t lose weight.
Eating constantly does not provide the critical period of very low insulin to balance the high insulin periods. Persistently high insulin leads to insulin resistance, which leads only to higher insulin. This is the vicious cycle of weight gain that we must break with fasting. 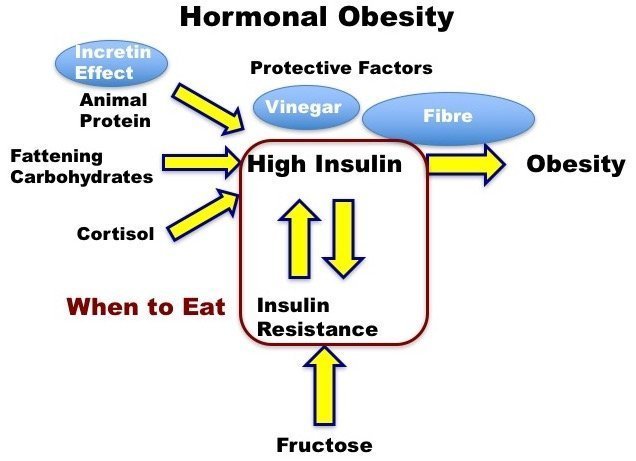 For the boy who cried wolf, which is the better strategy?  Stop crying wolf for a month, and then cry loudly once, or cry wolf constantly, but a little more softly? Similarly, to start burning body fat, you must allow prolonged periods of time of low insulin.
Rules for ‘When to Eat’

We often obsess about the foods we should or should not eat, the question of ‘what to eat’. But we often ignore the equally important question of ‘when to eat’. By attacking the insulin problem on both fronts, we have a far higher chance of successfully losing weight.