Do All Diets Fail? – How to Lose Weight XI

All diets fail. Long term dieting is sheer futility. After initial weight loss, the dreaded plateau appears, followed by the even more dreaded weight regain.
What do I mean? Weight loss follows the same basic curve so familiar to dieters the world over. Whether it is the Mediterranean, the Atkins, or even the old fashioned low fat, low calorie, all diets in the short term seem to produce weight loss. Sure, they differ by the amount – some a little more, some a little less. But they all seem to work.
However, by 6 months to 1 year, weight loss gradually plateaus followed by a relentless regain despite continued dietary compliance. This occurs regardless of the dietary strategy. In the 10 year Diabetes Prevention Program, for example there is a 7 kg weight loss after one year. The dreaded plateau, then weight regain, follows. So all diets fail. The question is why.  Sure there are those that seem to maintain their weight loss for year, but we cannot ignore the majority that struggle with weight loss.  Further, most academic research seems to indicate that most diets fail, whether it stops to work, or whether it is due to lack of compliance. 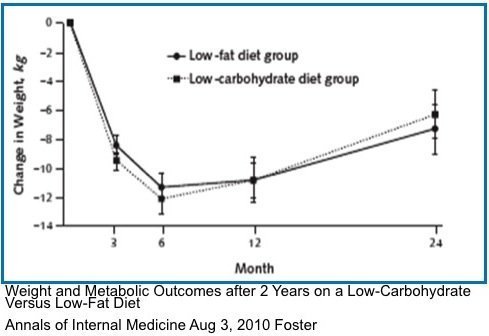 This happens because the body reacts to weight loss by trying to return to its original body set weight (BSW).  This is the body weight ‘thermostat’, variously called the appestat, or the lipostat.  Even the low carbohydrate diets, proven to have superior weight loss effects in the short term, show the same inexorable plateau and weight regain.
We hope the BSW will decrease over time, but this hoped-for reduction does not materialize. Why does the BSW still stay high even if we are eating all the ‘right’ things? This is because insulin levels stay elevated. Only half of the problem has been addressed. Two main things maintain high insulin levels. The first is the foods that we eat. This is what we usually change when we go on a diet. But we fail to address the other main concern. This is the longer-term problem of insulin resistance or ‘When to Eat’.
Insulin resistance maintains high insulin levels. High insulin maintains the high BSW. This inexorably erodes weight loss efforts. Hunger increases. Metabolism (TEE) relentlessly decreases until it falls below the level of energy intake. Body weight plateaus and then ruthlessly increases back to the original BSW, even as the proper diet is maintained. For some, changing ‘what we eat’ is clearly not enough. This is the problem we are all familiar with. All diets fail.

To succeed, we must break the insulin resistance cycle. But how? Consider the analogous problem of antibiotic resistance. If antibiotics are used at persistently high levels, resistance develops. How do you break antibiotic resistance? The knee-jerk reaction is to use even higher doses of antibiotics to ‘overcome’ the resistance. But this will only encourage the development of more resistance. The answer is the exact opposite. The answer is to reduce use of antibiotics. Having periods of very low antibiotic usage breaks the resistance.
The same logic applies to insulin resistance. The body’s knee-jerk reaction to insulin resistance is to increase insulin levels. But this only creates more insulin resistance. The answer is the exact opposite. We must create recurrent periods of very low insulin levels, since resistance depends on persistent, high levels. But how can we create those very low levels of insulin?
So the forgotten question of weight loss is “When should we eat?” We don’t ignore the question of frequency anywhere else. Falling from a building 1000 feet off the ground once will likely kill us. But is this the same as falling from a 1-foot wall 1000 times? Absolutely not. Yet the total distance fallen is still 1000 feet.
The first step is to eliminate all snacking in between meals and at bedtime. This is hardly some far-fetched idea. We are simply turning back the clock to the 1960s. Eating snacks or eating at a place other than a table was actively discouraged. There was no eating in the car, or in front of the TV.
If all meals were eaten between 8am to 6 pm, this was enough to prevent obesity. So, even though they were eating white bread and pasta, there was minimal obesity compared to today. I mean – who ate whole wheat bread in the 1960’s?  Nobody sold multigrain bread.  Rye?  Please.  And don’t get me started on whole-wheat pasta – that didn’t even exist then. Ask for quinoa and people thought you were swearing in spanish.
All foods will increase insulin levels to some degree. Eating the proper foods will prevent high levels, but won’t do much to lower levels. Some foods that are better than others, but all foods still increase insulin. The key to prevention of resistance is to periodically sustain very low levels of insulin. If all foods raise insulin, then the only logical answer is the complete voluntary abstinence of food. The answer we are looking for is, in a word, fasting.
See the lecture The Aetiology of Obesity 2/6 – The New Science of Diabesity
See the lecture The Aetiology of Obesity 4/6 – The Fast Solution

I got a question whether I disagreed with Dr. Andreas Eenfeldt who argues that diets work if you can stick to it, and his post makes a terrific case.  This is my response:
I’m a huge fan of Dr. Eenfeldt’s http://www.dietdoctor.com blog. It is consistently one of the most useful sources of nutritional information on the Internet. However, I have a slightly different view of how diets ‘fail’. Whether a diet fails because of lack of effect, or due to lack of compliance, to me, it is the same end result. The weight is still not controlled.
That is why it is necessary to have more than one way of achieving the same goal – reducing insulin and thereby reducing weight. If you can stick to a 20gm carb diet in the long term, you will likely do well. But what if you cannot? Are you doomed to failure? Not at all. You can achieve the same result by using a different pathway of insulin reduction.
I am completely in agreement with Dr. Eenfeldt’s approach, and I think it makes absolute sense.  I’ll note, too that he is a proponent of intermittent fasting.  I tend to emphasize the IF strategy because it is conceptually, a much simpler proposition for patients to follow.
This post is not meant to be pessimistic despite the title (All Diets Fail), but actually optimistic (a certain strategy may fail, but you can use another one to achieve the same goal).  This will become clearer in future posts.
This is the end of this blog series.