I’m going to talk about something completely different than the usual obesity, insulin and type 2 diabetes stuff – antibiotics. This is another area where current medical teaching is completely logic-free. In many ways it reminds me of the entire ‘Type 2 diabetic patients have too much insulin. So, let’s give them more insulin and see if it helps’ argument. Logically it makes no sense. So, instead the medical establishment adopts a ‘I’m the expert so don’t bother trying to talk sense into me. Just do what I say’ attitude. 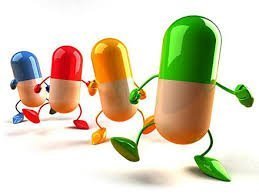 Antibiotic treatment regimens are largely the same. Suppose you go to your physician for a bacterial infection. Viruses, like most common colds, are not affected by antibiotics, so therefore should not be prescribed. However, because many bacterial infections have the same symptoms, antibiotics are often prescribed ‘just in case’. This leads to antibiotic overuse.
Exposure creates resistance. High persistent levels of antibiotics lead to antibiotic resistance. In this case, the antibiotics kill off most of the bacteria, but there will always be a few that are resistant. Since everybody else is dead, these bacteria, which used to be very rare, are able to multiply, propagate and pass on their resistance to other bacteria.
These are transmitted by something called plasmids. Inside the bacteria, plasmids help the bacteria develop resistance. But these plasmids can be transmitted to other bacteria which means that resistance spreads much, much faster than otherwise. But the basic formula remains the same. Persistently high levels of antibiotic use leads to antibiotic resistance, just as high levels of insulin leads to insulin resistance. 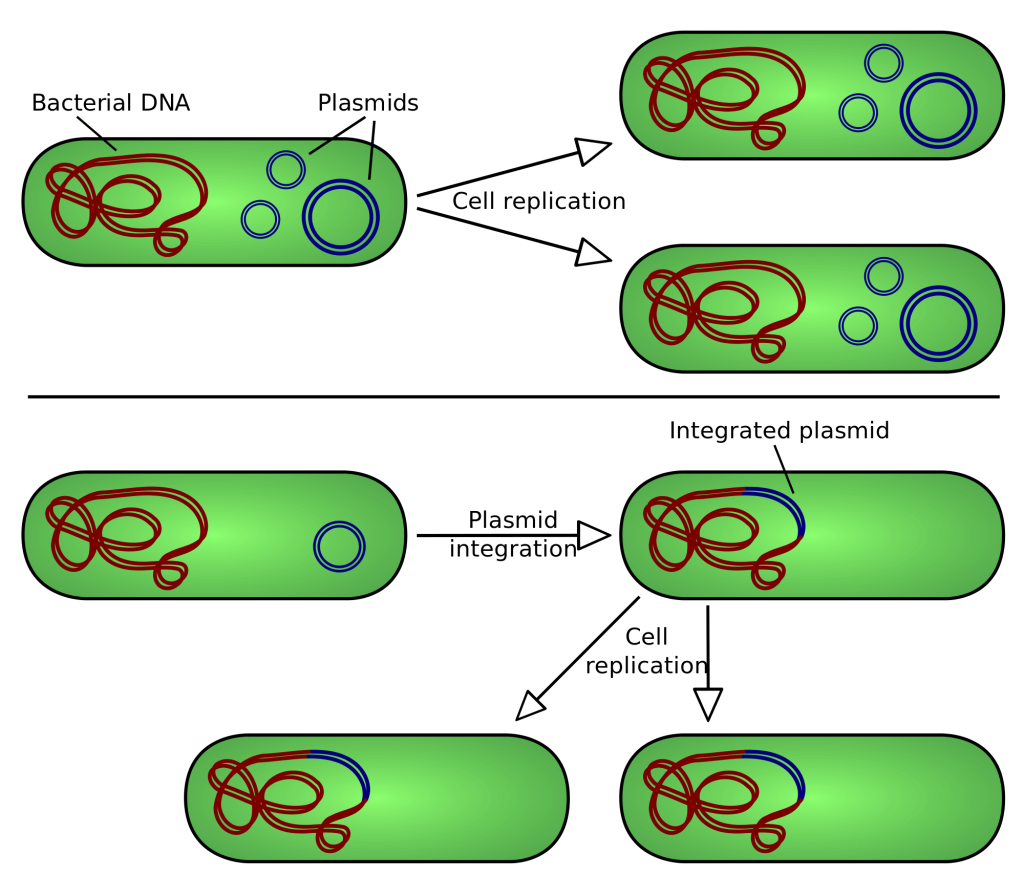 Knowing this, the key would be to use less antibiotics. (Obesity is caused by too much insulin, so the key is to lower insulin). In many hospitals in the United States, antibiotic resistant ‘super-bugs’ have become a huge issue. Doctors in America love to use the latest and greatest medicine, and antibiotics are no different. Heavy handed dosing of the latest antibiotics has eventually led to tremendous problems with antibiotic resistance.
For example, MRSA (Methicillin Resistant Staph Aureus) rates doubled in academic American hospitals between 2003 and 2008. There are tuberculosis that are multi drug resistant. This has led to calls from the Infectious Disease Society to call for more antibiotics in their idiotic 10×20 plan. They want 10 new antibiotics approved by 2020.
Why do I call it idiotic? Let’s back up and think about their reasoning. Too many antibiotics causes resistance. Obvious answer is to use less antibiotics. Instead, the answer, according to these highly paid infectious disease specialists is to create even more antibiotics? Am I the only one who sees a problem? The problem is not the we don’t have antibiotics. We have lots of them. The problem is that we use them too much. If we simply create more antibiotics, but continue to use them heavily, then we will only get more antibiotic resistance. All that hard work of creating new antibiotics will have been wasted.
So the answer is not to create more antibiotics. That’s like giving insulin to patients with high insulin levels. The cause of the resistance is overuse of the antibiotics that we already have. So the answer is wary – use LESS antibiotics, not create MORE.
Alcoholism should not be treated by giving more alcohol. Cocaine dependence should not be treated by giving cocaine. It’s idiotic.
News story abound about huge funding for battling the ‘superbug’ problem. Here’s one, for example, about Harvard’s Dr. Grad researching new ways to ‘defend the wonder drugs’. Of course, millions of dollars are being spent for ‘new’ research into the tracking and treating antimicrobial resistance. He receives support from charitable organizations to do this work. Of course, since we already know the cause, the solution is bloody obvious. Heavy use of antibiotics creates resistance. Use less antibiotics. Case closed. Mischief managed.
So, when you go to your doctor for antibiotics, what happens? A typical prescription is ‘Take amoxicillin 500 mg three times a day for 14 days’ The question is this. How does the doctor know how long you should take antibiotics for? You might imagine that there are all sorts of studies that have compared short duration and long duration antibiotics. You would also be wrong.
Mostly, doctors follow an eminence based medicine standard. That is, somebody made up a regimen 14 days and that’s why they gave you 14 days. There are, in fact, virtually no studies to guide the proper length of treatment. It’s basically the WAG method (wild-assed-guessing). Most of medicine follows the WAG methodology, although doctors will try to convince you otherwise. It is standard to treat infections in 7 day increments – 7 days or 14 days. Why? Because somebody said so. In the year 1695!
Usually, with the antibiotics will come with the admonition that you should take all 14 days, even if you are feeling better by day 2. You might ask the question ‘Why should I take another 13 days of antibiotics if I’m feeling well?’ To which the only answer is ‘Because I said so’.
Mostly the reason given that you need to complete the full course even if you are feeling well is because you don’t want to cause resistance. Huh? Too much antibiotics creates resistance. So, we should take another 13 days of useless antibiotics to prevent resistance when we know that it will actually CREATE resistance? WTF? 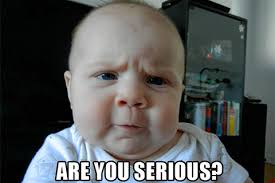 Again, let’s consider this logically. If you are otherwise healthy, you have an immune system to deal with infections. It gets overwhelmed, so you need antibiotics. Within 2 days of antibiotic reinforcements, the war on bacteria has turned in your favor. Most of the enemy is dead, and the remaining bacteria are beating a hasty retreat. We can stop using the nuclear arsenal and let the immune system mop up. Is there any harm? No. What’s the worst that will happen? If the bacteria start to mount a comeback, then you can take more antibiotics.
But what happens if you slavishly take all 14 days? You will suffer much higher rates of resistance and future battles against bacteria will not go as easily. The risk of side effects is much higher. Any benefits? Not that I can see. The problem of resistance cannot be underestimated. It doesn’t simply affect you, it affects the entire health care system. A problem created for nobody’s benefit.
In my hospital, as with many others, there are Antibiotic Stewardship Programs (ASP) to accomplish this. They are specially trained pharmacists and doctors that will review antibiotic orders by physicians and make suggestions. Certain antibiotics are deliberately restricted from wide usage to prevent resistance. That way, when a truly horrible infection comes along, those antibiotics are still effective. 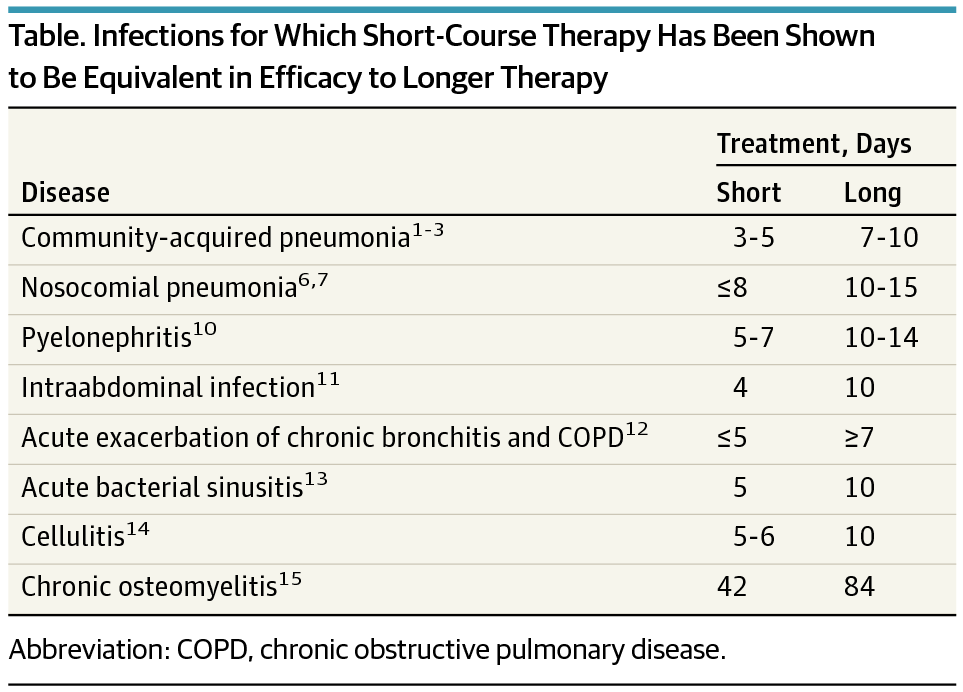 A recent paper published in JAMA makes the point that less is more. This paper reviews all the recent clinical trials in which virtually every single time, the shorter course of antibiotics is as effective as the longer one. In almost all cases, you can use 1/3 to 1/2 the dose of antibiotic and get the same result. That’s 1/2 to 2/3 less resistance, baby!
Which is kind of, obvious. Suppose you are washing your car. You wash for 10 minutes and it’s clean. Should you continue to wash for another 60 minutes and assume it will be more clean? Of course not. Well, if the bacteria are mostly dead (leaving the rest for the immune system to mop up), then what’s the point of taking more medications? None.
So, what’s the logical way to use antibiotics? Well, it’s pretty simple. If you don’t need them, don’t take them (viruses). If you need them, then take them. But you should take them only until you feel better. After that, you can rely on your body (assuming that you are otherwise healthy) to take care of the rest. If you need 3 days of antibiotics, then take 3 days. If you need 2 weeks then take two weeks. But don’t take 2 weeks of antibiotics if you only need 3 days.
Sometimes, I assume that the only place in medicine where there are obvious logical gaps is nutrition. Sadly, no.