The Atkins revolution was well and truly underway by the mid 2000s.  Millions of people around the world were following the Low-Carbohydrate lifestyle.  Burger King introduced lettuce wrapped burgers to reduce the carb content.  Everybody seemed to know somebody who was on the diet and had lost a lot of weight.  The possibility of permanently reducing weight and all its associated health complications seemed within grasp. 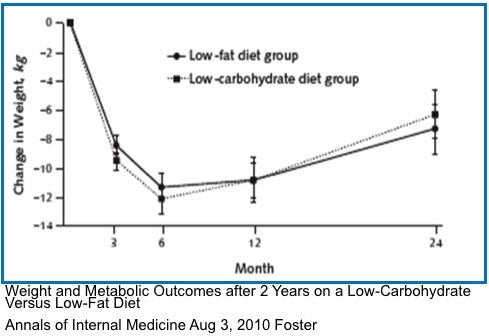 But alas, it was not to be.  Longer term studies of the Atkins diet failed to confirm the hoped-for benefits.  Dr. Foster’s randomized controlled study of 307 patients failed to find improved weight loss in the low carbohydrate group.  The experience of this group was documented in the excellent book “Rethinking Thin” by New York Times writer Gina Kolata.  Both the low-fat and the Atkins groups lost weight, and both groups regained the weight.
A systematic review of all the dietary trials showed that much of the benefits of a low carbohydrate approach faded by 1 year.In the follow up to the DIRECT study, it was found that by 12 months, weight had started to regain in all patients, including the low carbohydrate group. 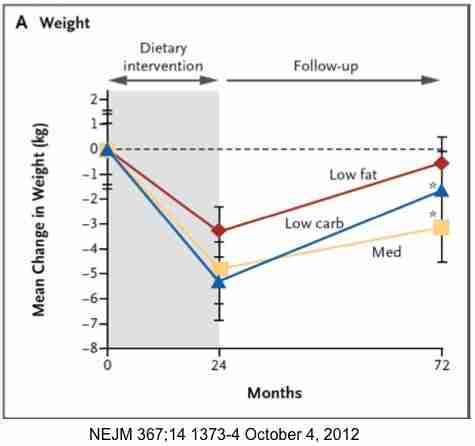 Some of this was due to the low compliance in both the low calorie as well as the low carbohydrate group.  Because calories are not restricted, many assumed that the Atkins diet was going to be easier to follow and therefore have better compliance.  It turned out that compliance with the diet was equally low in the low calorie as well as the low carbohydrate group.  Upwards of 40% of each group would abandon the diet by 1 year with no better compliance in the Atkins group.
In a sense, this was completely predictable.  Many of the foods that were restricted were indulgent in nature.  Cakes, cookies, ice cream, and other desserts.  Everybody knew that these foods are not healthy for us and no help to weight loss efforts.  But we continue to eat them, simply because they are indulgent.  Food is a celebration.  Every celebration in human history is accompanied by a feast.  This is as true in year 2014 as it was in year 2014 BC.  Birthday, wedding, graduation celebrations – what do we eat?  Cake.   Ice Cream.  Not pork chops.  Why?  Because we want to indulge.  The Atkins diet does not allow for this simple fact, which doomed it to failure.
This confirmed the clinical observation of most people that the Atkins diet was not a lasting one.  Millions of people abandoned the Atkins approach and the New Diet Revolution faded into just another dietary fad.  The company Atkins Nutritionals, founded in 1989 by Dr. Atkins filed for bankruptcy amongst heavy losses as the user fled.
What happened?
One of the founding principles of the low carbohydrate approach is that insulin is the key driver of obesity.  This fact seems solidly grounded in science as we have discussed before.  Carbs are the major macronutrient (out of fat, protein and carbs) that cause blood sugars to go up.  As blood sugar goes up, insulin is assumed to also follow.  Therefore, carbohydrates are assumed to play the major role in stimulating insulin release.  This is true.  However, we have not considered the possibility that food may increase the insulin levels without raising blood sugars.
The breakthrough was discovered in 1997, with the publication of the insulin index.  Measuring the insulin response of 1000kJ portions of food, it was no surprise that the foods that stimulated insulin the most were the carbohydrate rich foods, bakery products, and snacks and confectionary.  What was astounding was the fact that protein rich foods also significantly raised insulin levels. 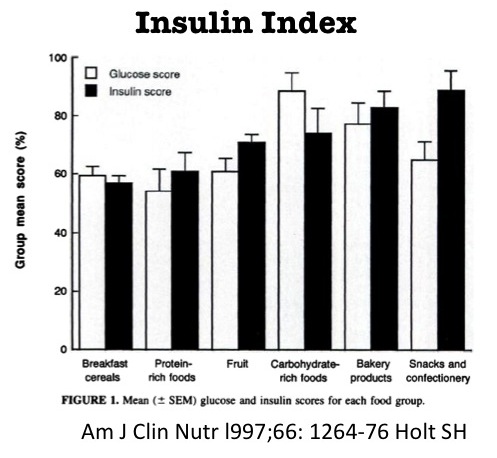 Where most people assumed that there was a tight correlation between glucose levels and insulin levels, it turned out that only 23% of the variability in the insulin response was due to the glucose.  In other words, only 23% of the insulin response is determined by how high the blood sugars rise.  The vast majority of the insulin response (77%) is not related at all.  Since it is insulin, and not glucose that drives weight gain, this changes everything.  This is precisely where the glycemic index diets failed.  They were targeting the glucose response with the assumption that the insulin response mirrored the glucose.  But this is not the case.  You could lower the glucose response by diet, but you didn’t necessarily lower the insulin response.  In the end, it is only the insulin response that matters.
The recent discovery of the incretin effect partially explains things.  What has been recently appreciated is that the gastrointestinal tract, particularly the stomach and small intestine actively secrete hormones.  There are so many neurone in the GI system that it has sometimes been called the ‘second brain’.  The incretin hormones, Glucagon Like Peptide (GLP-1) and Glucose-dependent insulinotropic polypeptide (GIP) are secreted by the fundus of the stomach in response to food.  GLP-1 is known to increase insulin release by the pancreas.  The main role of GIP, found in the duodenum and jejunum (small intestine) is to stimulate insulin release.  Fats, amino acids and glucose all stimulate GLP-1 release and thus, increased insulin.  The amino acid glutamine may be a particularly potent stimulus.
Even non nutritive sweeteners, which have no calories at all, can stimulate the insulin response.  Sucralose, when studied in obese human volunteers, raises the insulin level 22% higher than water.  The GI tract and the pancreas can detect sugars through taste receptors similar to those in the mouth.  This may activate secretion of GLP-1 and insulin.
Furthermore, there is a well-known effect called the ‘cephalic phase’ of insulin secretion.  This refers to the fact that the body starts to anticipate food as soon as you put it in your mouth and long before any nutrients hit the stomach.  Studies have shown insulin release in response to sucrose and saccharine even if you swish it around your mouth and spit it out.
Insulin does not respond only to high sugars, but the incretin effect shows that fatty acids and amino acids also play a role in the stimulation of insulin.  Hold on.  This changes everything.  The simple implication is this.  If carbohydrates are not the only, or even the major stimulus to insulin secretion, then restricting carbohydrates may not have as large an effect on insulin levels as we may have believed.
Continue here to Hormonal Obesity Part XXI – Replace, Don’t Add Fruit
Start here with Calories Part I – How do We Gain Weight?
See the entire lecture – The Aetiology of Obesity 3/6 – Trial by Diet