“The second of the chief causes of obesity is the floury and starchy substances which man makes the prime ingredients of his daily nourishment. As we have said already, all animals that live on farinaceous food grow fat willy-nilly; and man is no exception to the universal law.”

This is what William Banting also wrote about in his best-selling pamphlet “Letter on Corpulence” in 1863.  So these ideas have been with us for over a century.  By the mid 1950′s the Caloric Reduction as Primary theory of obesity seemed to be gaining the upper hand.  It seemed so much more scientific to be discussing calories rather than foods.
But there were still holdouts.  Dr. Alfred Pennington wrote an editorial in The New England Journal of Medicine in 1953 emphasizing the role of carbohydrates in obesity.  Walter Bloom performed studies comparing low carbohydrate diets to fasting regimens and found comparable weight loss between the two.  There were still many that believed the Carbohydrate-Insulin Hypothesis.
Dr. Irwin Stillman wrote “The Doctor’s Quick Weight Loss diet” in 1967 recommending a high protein low carbohydrate diet which is still in print today.  It quickly went on to sell over 2.5 million books and the diet became known as the Stillman diet.  The reasoning behind the diet was that protein required extra energy to metabolize (the Thermogenic Effect of Food – TEF), eating more protein could effect weight loss.  Dr. Stillman himself lost 50 pounds on his diet of up to 90% protein (!).  He reportedly treated over 10,000 overweight patients on this diet.  The low carb movement was well underway.
Dr. Robert Atkins opened up his cardiology practice in New York City in 1960.  Himself overweight, he was influenced by some of the low carbohydrate literature and decided to try it himself.  To his amazement, it worked as advertised.  Without counting calories, he was able to shed his bothersome extra weight.  He began to prescribe the diet to patients in his practice and noticed that some patients were doing extremely well.  He became featured on magazine such as Vogue and published the original book “Dr. Atkins Diet Revolution” in 1972.
In 1983, Dr. Richard Bernstein, himself a type 1 diabetic since the age of 9, opened a controversial clinic to treat diabetics with a strict low carbohydrate diet. This was directly in contrast to the position of most of the nutritional and medical authorities of the time. Originally an engineer, he entered medical school at the age of 45 to learn how to control his sugars better.
In 1992 and then 1999, Dr. Atkins published an updated version of his best-seller “Dr. Atkins’ New Diet Revolution”.  Dr. Bernstein published “Dr. Bernstein’s Diabetes Solution”.  Both would become monster best-sellers with over 10 million books sold.  Dr. Richard Heller, a research biologist wrote “The Carbohydrate Addicts Diet” in 1993 which would go on to sell over 6 million copies.  The Atkins Onslaught had well and truly begun.
By this time, the low fat religion had taken root in the medical community.  Despite a stunning lack of evidence to support the low-fat advice being doled out by the spadeful, medical associations such as the American Heart Association and the American Medical Association were quick to denounce these new ‘fad’ diets. 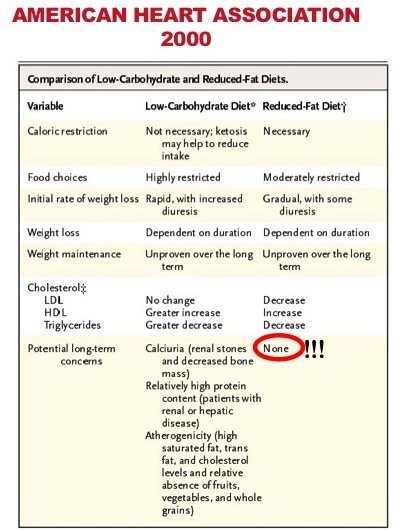 The American Heart Association, in their own publication admitted that the Reduced-Fat Diet was unproven over the long term.  It also conceded that the Atkins diet had superior cholesterol effects.  While there was no change in the LDL (bad cholesterol), there was better reduction in triglycerides and better increase in HDL (good cholesterol).  The Atkins diet also resulted in more rapid initial weight loss.  All these were good things.
Despite this, the AHA had concerns with atherogenicity – that is, the rate at which plaques would form in the arteries.  There was, of course, no evidence that this was actually true.  Regarding its own unproven recommended low fat diet – it had no concerns!
No concerns that the higher level of sugar intake was bad.  No concerns that the low fat diet could be worsening type 2 diabetes.  No concern that the obesity and diabetes epidemic were raging full force under their very noses.  The AHA fiddled, while Rome burned.  During the 40 years the AHA advised a low fat diet, the obesity crisis grew to gargantuan proportions.  Yet, at no time did the AHA begin to question whether their completely ineffectual advice was actually helping people.  Instead, they played their favourite game – Blame the patient!  It is not our fault the diet doesnt work.  It was their fault for not following the diet.
Instead, as a new competitor came to challenge conventional wisdom, the doctors began their campaign of slurs and innuendo.  But, spurred into action, new studies started coming out by the mid 2000s comparing the ‘New’ Low Carb diets to the old standards. 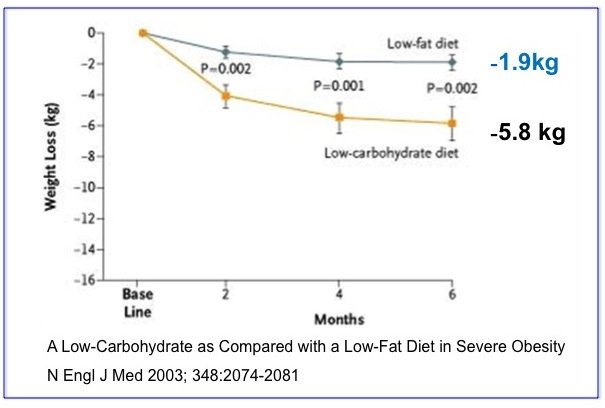 Published in the prestigious New England Journal of Medicine, the first few short term studies showed greater short term weight loss with the Atkins styled low carbohydrate plan.
In 2007, the Journal of the American Medical Association published a more detailed study.  Four different, popular weight plans were compared in a head to head trial.  There was one clear winner – the Atkins diet.  The other three were fairly similar with regards to weight loss.  However, in comparing the Atkins to the Ornish (very low fat) diet, it became clear that not only was weight loss better, but so was blood pressure, cholesterol and blood sugars.  A grand slam! 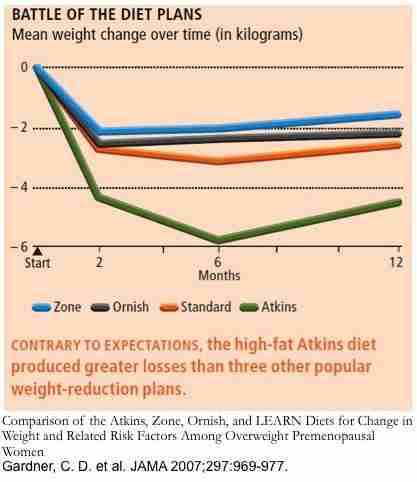 In 2008, in the New England Journal of Medicine, yet another study was released that showed the superior weight reducing method of the Atkins diet.  Done in Israel, it compared the Mediterranean, the Low-Fat and the Atkins diet. 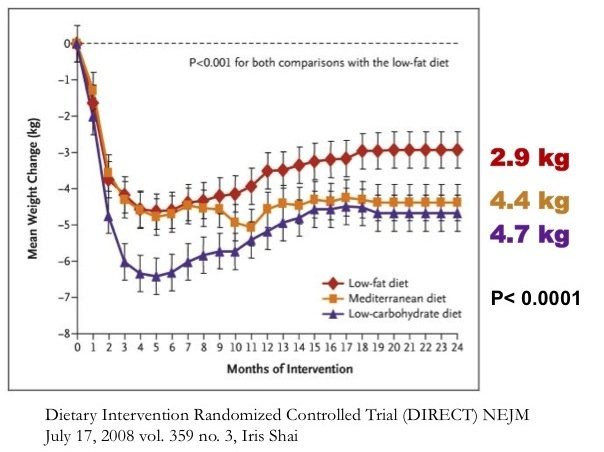 While the Mediterranean diet was able to hold its own against the powerful fat reducing Atkins diet, the Low Fat American Heart Association standard was left choking in the dust –  sad, tired and unloved except by academic physicians.  Not only that, but the Atkins reduced the HgA1C, a 3 month average of blood sugars by 0.9%, far more than either other diet and almost as powerful as medications.  The short-term metabolic benefits of the Atkins diet were also far superior.  The hsCRP, a measure of inflammation, was reduced the most on the Atkins diet.
The medical profession was stunned and a little bit flabbergasted.  These studies had been undertaken almost with the express purpose of destroying the Atkins reputation.  Instead, they had bolstered it.  The New Diet Revolution was on pace.  Long live the Revolution.  But there was trouble ahead. 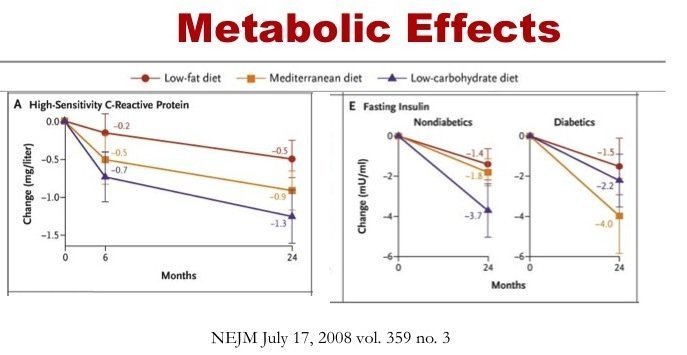