Autophagy, a cellular cleaning process, gets activated in response to certain types of metabolic stress, including nutrient deprivation, growth factor depletion and hypoxia. Even without adequate circulation, each cell may break down sub-cellular parts and recycle those into new proteins or energy as required to survive. This explains why mTOR and autophagy are seen in every organism from yeast to humans. Studies on mutations of animals as varied as yeast, slime molds, plants and mice show that deletions of autophagy related genes (ATG) in animals is largely incompatible with life. That is, most life on earth cannot survive without autophagy.
Insulin and amino acids (through mTOR) are the main regulators of ATGs. These also happen to be two of our most basic nutrient sensors. When we eat carbohydrates, insulin goes up. When we eat protein, both insulin and mTOR go up. When nutrient sensors sense, well, nutrients,  we signal our body to grow bigger, not to get smaller. Thus nutrient sensors turn off autophagy, which is primarily a catabolic (breaking down) as opposed to an anabolic (building up) process. However, there is a low basal level of autophagy going on at all times, as it acts as a sort of a cellular housekeeper. 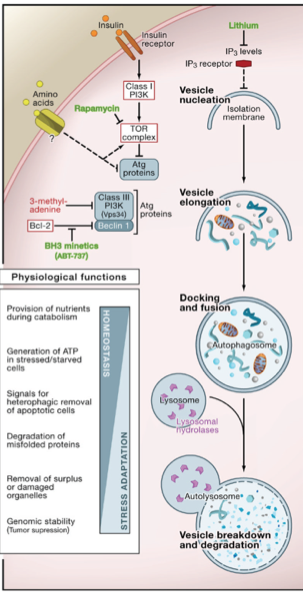 Cellular Housekeeper
Autophagy’s main roles are:
– remove defective proteins and organelles
– prevent abnormal protein aggregate accumulation
– remove intracellular pathogens
These mechanisms are implicated in many aging related diseases – atherosclerosis, cancer, Alzheimer’s disease, neurodegenerative diseases (Parkinsons). There is a basal cellular housekeeping provides quality control on the proteins in our body. Mice genetically  mutated lacking ATGs develop excess protein buildup inside cells. There is both too much protein, and damaged proteins that are not broken down. It’s sort of like the junk you have in the basement. If you have some old, broken down lawn furniture, you should probably toss it into the dumpster. If you keep it around in your basement, soon your house starts to look like that TV show ‘Hoarders’. There is a related process called mitophagy to cull the abnormal organelles (mitochondria, in this case).
In cancer, it is generally accepted that autophagy can suppress tumor initiation. Since autophagy blocks growth and increases breakdown of proteins, this makes perfect sense. Cancer cells, for example, often have much lower levels of basal autophagy than normal cells. Many of the best studied oncogenes and tumor suppressor genes are intimately associated with autophagy.
For example, the well known PTEN tumor suppressor gene blocks PI3K/Akt thus activating autophagy. Mutations to PTEN, found very commonly in cancers, thus lead to lower levels of autophagy and increased risk of cancer. However, it appears to be a double edged sword. As cancer progresses, autophagy may help cancer survival, just as it helps all cells survive in a stressful environment.
During times of low nutrients, autophagy breaks down proteins for amino acids, which may be used for energy. Cancer, which may grow so quickly as to outstrip its own blood supply, may thus be aided by increased autophagy, as this would supply much needed energy and deal with stress.
The other area of intense interest is the neurodegenerative diseases of Alzheimer’s Disease, Parkinson’s disease and Huntington’s chorea. While these all manifest differently, Alzheimer’s with loss of memory and other cognitive changes, Parkinson’s with loss of voluntary movement and resting tremor and Huntington’s with involuntary movements, they all share one pathologic similarity.
All these diseases are characterized by excessive build up of proteins inside neurons leading to dysfunction and ultimately disease. Thus, failure of protein degradation pathways may play a very important role in preventing these diseases. However, the exact role of autophagy in these diseases is still yet to be defined. Further, growing research also implicates mitochondrial dysfunction as a key pathway in the development of neurodegenerative diseases.
Studies in humans are difficult to do because of the multiple intersecting pathways. The clearest evidence usually comes from drugs where a single pathway can be changed at a time. The mTOR inhibitors (rapamycin, everolimus) activate autophagy by blocking mTOR. Remember that mTOR is a nutrient sensor, predominantly for amino acids. If there is protein being eaten, mTOR goes up, and growth pathways are allowed to continue. If there are no nutrients being eaten, mTOR goes down, and autophagy goes up. Rapamycin blocks mTOR, fooling the body into thinking that there are no nutrients and this increases autophagy. 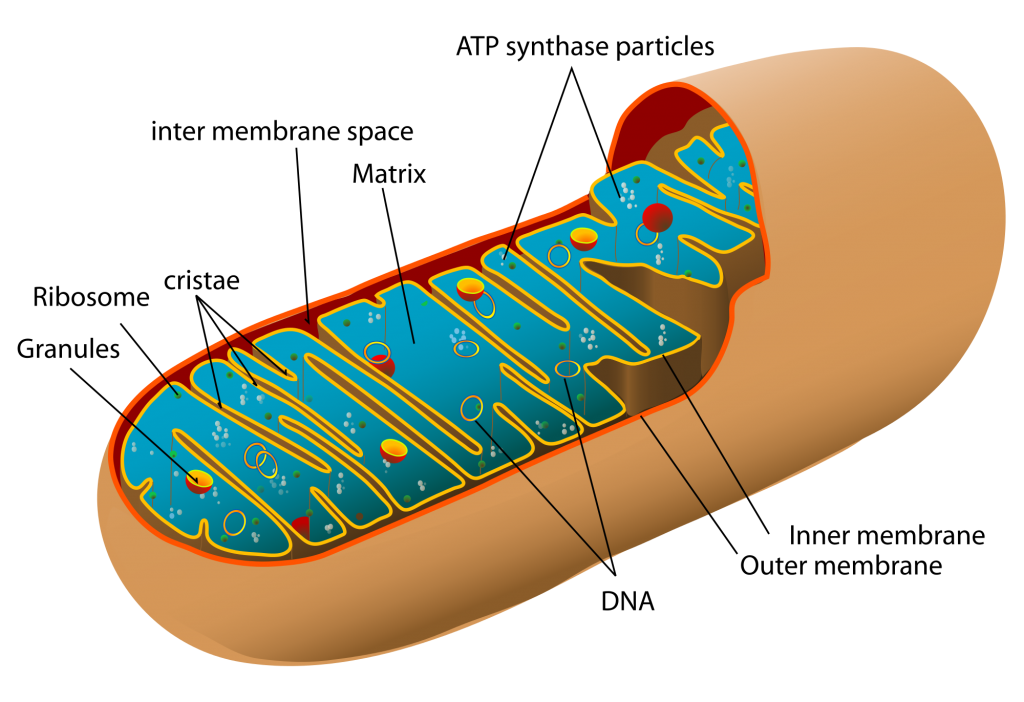 These drugs are mainly used for the their immune suppressing effects in transplant medicine. Interestingly, though, most immune suppressants increase the risk of cancer where rapamycin does not. In certain rare cancers, mTOR inhibitors have demonstrated anti-cancer effects.
Metformin, a drug widely used in type 2 diabetes, also activates autophagy but not through mTOR. It increases AMPK, a molecule that signals the energy status of the cell. If AMPK is high, the cell knows that it has insufficient energy and increases autophagy. AMPK senses the ADP/ATP ratio, thus knowing the cellular energy levels – sort of like a fuel gauge but in reverse. High AMPK, low cellular energy status. High AMPK levels directly and indirectly activate autophagy, but also mitochondrial production. 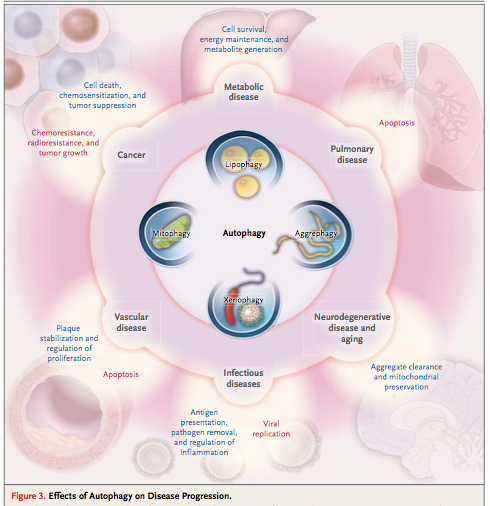 Mitophagy is the selective targeting of defective or dysfunctional mitochondrion. These are the parts of the cell that produce energy – the power houses. If these are not working properly, then the process of mitophagy targets them for destruction. The critical regulators of this process includes the notorious tumor suppressor gene PTEN. This may initially seem bad, remember that, at the same time that mitophagy is increased, new mitochondrion are being stimulated to grow. AMPK for example, will stimulate mitophagy as well as new mitochondrion growth – essentially replacing old mitochondrion with new ones in a renewal process. This is fantastic – essentially a complete renovation of the mitochondrial pool. Break down the old, junky mitochondrion and stimulate the body to build new ones. This is one of the reasons metformin is commonly promoted as an anti-aging compound – not so much for its blood sugar effects, but instead because of its effect on AMPK and autophagy.

Notice how mTOR is the most central nutrient sensor to impact autophagy. mTOR integrates signals from insulin, nutrients (amino acids or dietary protein) and the fuel gauge of the cell, AMPK (all energy including fats) to determine whether the cell should divide and grow, or involute and become dormant. Excess nutrients – not merely carbohydrates, but all nutrients may stimulate the mTOR system and thus turn off autophagy, putting the body into a growth mode. This encourages growth of cells, which, as I will repeat often, is not usually good in adults.
These pathways are central to life on earth because they are the link between nutrient status and growth. For single celled organisms, if there was not enough nutrients, they simply went into a dormant stage. Think about a yeast. If there is no food, it simply dries up into a spore. When it lands on water, it blooms and starts to grow.  So mold is sitting in your house in a dried up, inactive state. If it lands on some bread,it starts to grow into a familiar mold. It only grows when there are sufficient nutrients and water.
In a multi celled organism, it becomes much more difficult to synchronize the availability of nutrients and growth signalling. Consider an animal such as a human being. We are designed to live for days or weeks without food – subsisting on the stored food energy in our body fat. However, when food is scarce, we do not want to grow quickly and therefore we require nutrient sensors which are directly connected to growth pathways. The main three are:

When these nutrient sensors detect low nutrient availability, they tell our cells to stop growing and start breaking down unnecessary parts – this is the self cleansing pathway of autophagy. Here’s the critical part. If we have diseases of excessive growth, then we can reduce growth signalling by activating these nutrient sensors. This list of diseases includes – obesity, type 2 diabetes, Alzheimer’s disease, cancer, atherosclerosis (heart attacks and strokes), polycystic ovarian syndrome, polycystic kidney disease and fatty liver disease, among others. All these diseases are amenable to dietary intervention, not more drugs.