Beyond the Somatic Mutation Theory of Cancer – Cancer 15

“The problem lies not so much in developing new ideas, but in escaping from old ones” John Maynard Keynes
By 2009, it was clear that the somatic mutation theory (SMT) – that cancer was simply a random collection of genetic mutations – was leading exactly nowhere. Billions of research dollars and decades of work yielded virtually no useful treatments. So, in an uncharacteristically open-minded and insightful move, the government decided to do something very smart. It asked for help. But where to get that help? The National Cancer Institute (NCI) was already giving millions of research dollars to cancer biologists, cancer researchers, geneticists, physiologists, doctors etc. No, in a rare moment of clarity, the NCI decided that in order to think ‘outside the box’ you needed people who professionally live outside cancer’s box. Cancer researchers and doctors were so far in the box, they couldn’t see outside. 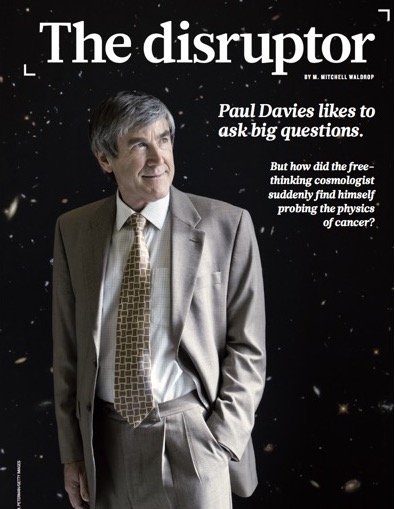 Instead, the NCI funded 12 Physical Science-Oncology Centers with $15 million each to look into the question of cancer’s origins and treatment, bringing physicists into the picture and not more and more of the same biologist/ researchers/ doctors. Rather than asking the same old questions and getting the same old answers, physicists would have an entirely new perspective on cancer, and perhaps this would help move cancer research in a newer, more productive direction.
Larry Nagahara, the NCI Program director for this initiative said astutely, “we actually want the [physicists] to ask the questions,” which will “vary greatly from those asked by biologists. A physicist may ask…‘what is the energy required for a cancer cell to metastasize?…What are the forces required for a cancer cell to move? Hopefully [this] will shed light on how cancer develops as a disease.”
Dr. Paul Davies was then a professor of physics at the University of Arizona. He had never looked into cancer before to this new assignment. He admits that prior to getting the call from the NCI, he had “no prior knowledge of cancer”, so he had the freedom to ask some basic questions. He writes, “What struck me from the outset is that something as pervasive and stubborn as cancer must be a deep part of the story of life itself. Sure enough, cancer is found in almost all multicellular organisms, suggesting its origins stretch back hundreds of millions of years.”
This is quite profound, and seems obvious to an outsider, but may not be to an insider with his/her ‘curse of knowledge’. Almost every known multicellular organism gets cancer. Almost every known cell type in the body (breast, lung, testicle, etc) can become cancerous. The origins of cancer did not lie in some random mutation making all these cells go berserk. The origins of cancer must lie in the origins of life itself.
Oncologists tend to view cancers as some kind of genetic mistake. Some mutations making cells go crazy and become cancer. But to Drs. Davies and Lineweaver, another cosmologist and astro-biologist, the behavior of cancer cells is any but berserk. Not at all. It is a highly organized, systemic method of survival. It’s no accident that cancer survives everything the body throws at it. It’s not a random collection of genetic mutations. Developing those specific attributes is as likely as throwing a pile of bricks into the air and having them land exactly as a house. Considering the body’s massive deployment of weaponery to kill cancer cells, it is impossible that cancer survives only as a freak accident. A freak accident that happens to every cell in the body, in every organism known to exist? If something seems ‘stupid’ but works (survives), then by its very definition, it’s not stupid. Yet cancer researchers and doctors had all treated cancer as some kind of random collection of stupid genetic mistake. No, there was stupidity going on, and it wasn’t the cancer’s.
Another great benefit of bringing in outsiders, especially physicists is that they bring a fundamentally different attitude to the cancer problem. Doctors and medical researchers always want ‘evidence’ to prove that something is true. That is, if cancer is due to smoking, then we must spend decades and millions of dollars to prove the smoking causes cancer. Each step along the way to the truth is paved with decades of bickering and demands to ‘see the evidence’.
That’s fine, but it’s not the way most physical science works. In theoretical physics, you have a theories, like Newton’s three laws. When you find an anomaly, like the wave-particle duality of light, then you must come up with a different theory to explain it. You may or may not be able to prove the existence of, say, Einstein’s gravity waves at the time. But if the theory explains the known facts and the anomalous findings better than the original theory, then it supplants it. Thus, Einstein was able to find support for his theories of relativity long before there was actual proof.
Physics embraces the anomaly, because it understands that it is only by explaining this anomaly that science move forward. The great American physicist Richard Feynman said “The thing that doesn’t fit is the thing that’s the most interesting; the part that doesn’t go according to what you expected”. Medicine, on the other hand, rejects new theories like a prom queen rejects pimple faced suitors. If ‘The Man’ says that calories cause obesity, then all other theories are shouted down. If ‘The Man’ says that cancer is caused by genetic mutations, then all other theories may apply elsewhere. They call this process ‘peer-review’, and glorify it as a religion. Galileo, for example, was not a fan of peer review by the church. In physics, your theory is only good if it explains the known observations. In medicine, your theory is only good if everybody else likes it, too. This explains the rapid pace of progress in the physical sciences and the glacial pace of medical research. 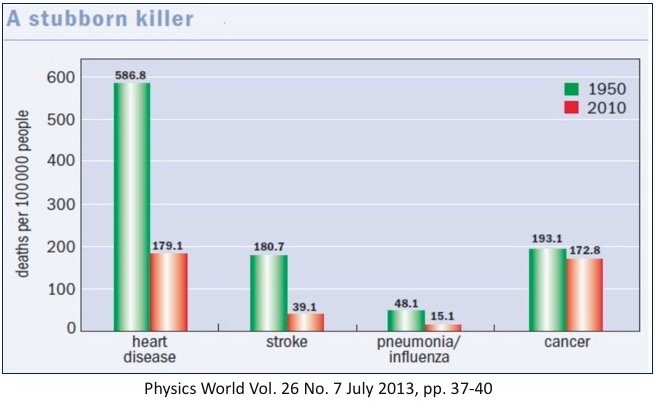 In medical research, we might have a hypothesis that dietary fat causes heart disease. This happened in the 1970s. Here we are in 2018, some 48 years later and we’re still debating the exact same issue. I work in nephrology (kidney disease) and I’m still prescribing the same medications and doing the same dialysis as when I went to medical school 20 years ago.
This was the precise point of bringing in an outside point of view. Physics moves in leaps and bounds. In quanta, if you will. A single correct theory, such as Einstein’s relativity or Neils Bohr’s quanta moves the entire field an incredible distance. Medical science, by contrast laboriously tries to move a single step at a time and tries to please all incumbent scientists through the tedious and stultifying process of peer review and trying to painfully prove every single step along the journey under the dictatorship of Evidence Based Medicine. In the field of obesity medicine, we still debate incessantly about calories, 100 years after it should have been settled. We still debate about – should we eat 3 meals a day or 1 meal or 6? Where physics moves at light speed, medicine moves on foot, taking 2 steps back for every one forward.
Even within medicine, cancer research is a disaster. Even though medicine moves slowly, there are occasional breakthroughs. So, for heart disease, you have new procedures, new technology (pacemakers etc.), new medicines and the death rate from heart disease, stroke and pneumonia have all fallen significantly in the last 60 years. Cancer? Not so much. Despite the world of technology moving on a MagLev bullet train, and the world of medicine moving at a crawl, cancer remains standing still. This, despite billions of research dollars every year, more ‘walks for cancer’ than you can count, more pink ribbons, more tear jerker stories on the mass media. Nobody wants to hear the truth, but here it is. The progress on cancer sucks. It really, really sucks.
Enter, the Disruptor. For the first time in 50 years, cancer medicine might get a breath of fresh air with the atavistic theories. Cancer was not a random collection of genetic mutations. Cancer was a targeted de-evolution to a more primitive form of life. The origins of cancer are the origins of life itself.
(Note for regular readers. I’m sorry because I have more to say about cancer, but I will take a break from the Cancer series for now, because of competing real life priorities (how rude!), and the upcoming release of The Diabetes Code)
Start here with Cancer Part 1