A behind-the-scenes look at medical education

Today, I’m going to take you on a little behind-the-scenes tour of what really happens with medical education and Big Pharma from my perspective as a community physician. Sometimes I forget that not everybody understands this, since many of my friends are physicians.
Doctors get continuing medical education (CME) through events like lectures and conferences. CME is necessary because many physicians practise for 30 or 40 years, and medicine is changing continuously, so they cannot rely on their medical school training, which might have happened in the 1960s. Doctors are required to get a certain number of hours of CME every year. You might imagine that doctors learn from unbiased experts dedicated to learning. Actually, nothing is further from the truth. The dirty little secret is that virtually all CME is sponsored heavily by Big Pharma giving them huge influence over what information is presented to doctors.
Every single level of CME has been corrupted by $$$. Let’s start at the bottom.
In virtually every hospital in North America, there are lectures called ’rounds’. They happen in every specialty and almost every single day, mostly at lunchtime. What a great idea. Doctors would spend lunchtime teaching each other the intricacies of their specialty. Sorry, no. Most doctors don’t prepare a full hours worth of lecture topic. Most are too busy to spend an hour listening a the lecture anyway. So, the friendly drug rep from Big Pharma helpfully gets lunch for everybody. Free lunch! That helps bring in the audience, but it doesn’t help the fact that they still need a speaker. 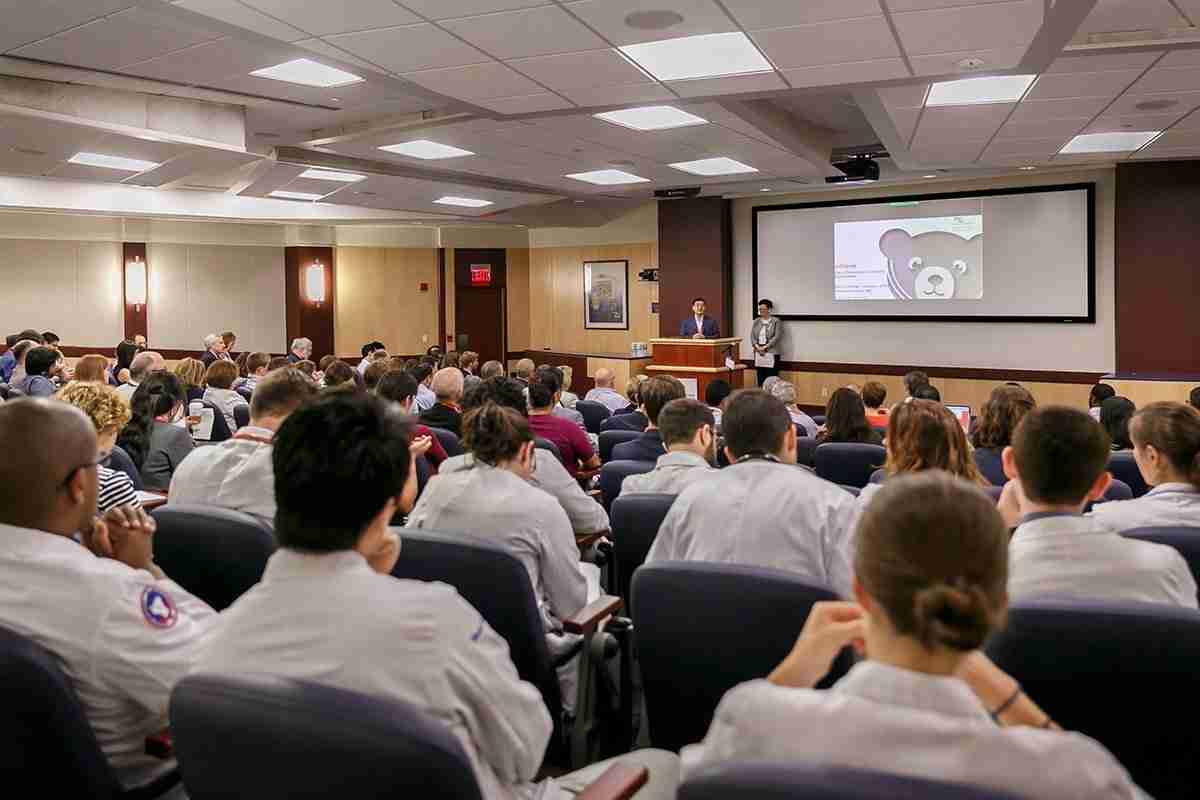 Once again, the drug rep is able to produce speakers! Big Pharma hires doctors to give lectures. Of course, these doctors are still don’t produce their own talk, so luckily, Big Pharma also makes the entire slide kit with full notes so all the doctor needs to do is parrot the words written for him. He only lends his name to give these lectures the sheen of respectibility. You can be sure that these ’rounds’ always support the use of more and more medications.
The standard rate in Canada to give one of these talks is $1500 for a single hour of work. Very lucrative, even if it means you need to intellectually prostitute yourself. Of course, there is no shortage of doctors willing to give these talks. Some doctors give talks several times per week.
Next, there are the dinner lectures. These, once again are helpfully organized by the Big Pharma drug reps. They invite local doctors to hear an ‘expert’. Once again, the doctor selected is ‘conveniently’ provided with the entire presentation to give like a trained monkey – delivering the exact message Big Pharma wants. Who are these doctors selected to speak? The ones that prescribe the most drugs, of course. So, they have no problem giving these talks because they already believe it. It’s essentially a giant infomercial.
According to regulations, these dinners are not supposed to be lavish. They should be the equivalent of cafeteria meals. Does that happen? Not a chance in hell. These dinners are held at the fanciest restaurants available. Of course, it comes with wine and a 3 course dinner, which normally would cost about $150 per person. The speaker gets $1500 for one hour.
I must confess here. I have given a few of these talks, but have only done 1 in the last five years, because it was a journal club specifically requested by my friend. However, I only present my own slides and I do not accept any restrictions on what I say. I stopped giving these lectures because I was just disgusted. The doctors in the audience were mostly interested in eating and clearly not even listening. It was awful. The money is good, but my soul paid the price.
The next place a doctor might expect to get CME is through conferences and other symposia. Often these are arranged through official sounding organizations – usually something like ‘Canadian Association of Superior Medical Knowledge’ (does not really exist). The public, of course, thinks these are legitimate organizations. The doctors know full well that these are puppet organizations funded by multiple drug companies. This allows them to pay salaries to physicians to do little other than be the figurehead –  always from a prominent university to give the organization a respectable veneer. You know, science director, medical liaison etc.
They organize one or two day conferences at hotels which usually includes about 6-8 hours of lectures full of ‘experts’. These conferences, if you had to pay for hotel space and speakers would normally cost about $500 per person to put on. However, doctors usually only pay $25 for two days of lectures and this includes breakfast, snack and lunch! With a wink, they are usually free.
Sad to say, these are, once again, thinly disguised drug infomercials. Almost all of the speakers are university doctors, who know a good payday when they see it. I attended one of these many years ago. Two prominent university professors presented about diabetes. “There is a wonderful treatment that lowers weight, blood pressure and blood sugar with no side effects. It’s called exercise.” Oh, this sounds promising.
He then spent the next 59 minutes of his 60 minute lecture talking about … drugs.
The very next speaker, who writes the Canadian Diabetes guidelines said “The first, second, and third line treatment of diabetes is lifestyle, lifestyle, and lifestyle”. Oh, this sounds promising. She then spent the next 59 minutes of her 60 minute lecture talking about … drugs. Oh, what drug whores.
Perhaps you think that things are better at the major universities. Sorry, that’s not really true either. The people who are promoted in the university hierarchy are not those that are the most intelligent. No, it’s those who bring in the most research dollars. Of course, it’s extremely difficult to get funding from governments. Instead, it’s far easier and far more lucrative to get drug company funding for research. This is often in the form of endowments and endorsed chairs. 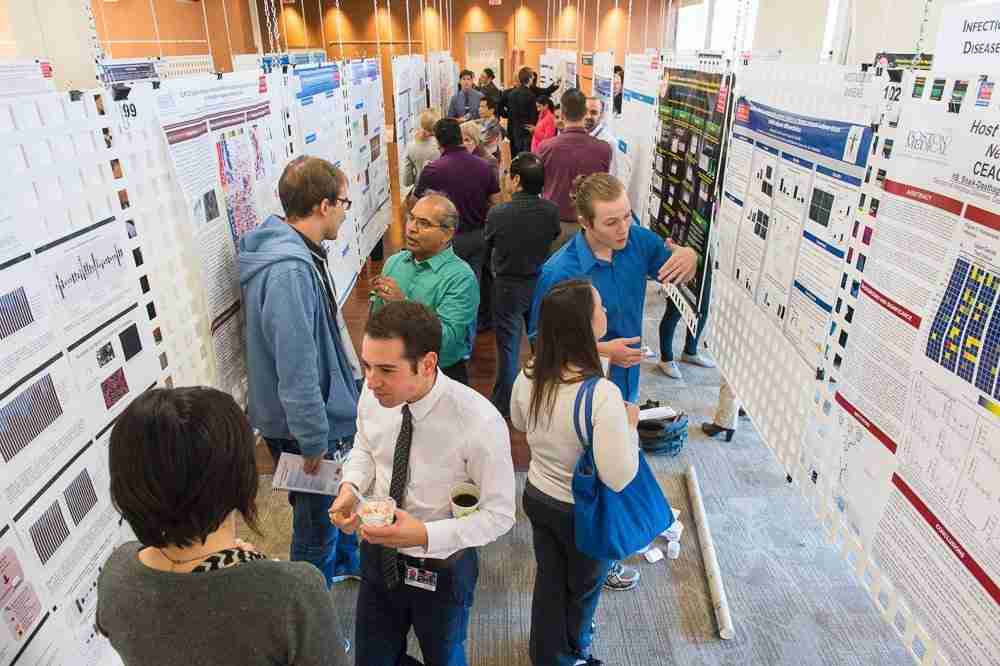 What happens to all the money you donate to ‘support research into diabetes’? Well, most of it goes toward paying for fancy hotels, fancy meals and fancy trips. Oh, of course, they can’t call it that. Instead, conferences are held in swanky hotels in far-away places. Why do most doctors go to the ‘European Conference on Amazing Medical Knowledge’? (does not really exist). Let me tell you, it’s not to get amazing medical knowledge. Hell, that’s available online for free in your underwear.
No, the main purpose is to visit Paris, or Copenhagen, or Barcelona. You take the research dollars donated in good faith and spend several thousand of them to go to Spain. You listen to one lecture and spend the next 3 days going to the fanciest restaurants you can find – all for research, of course. I know. The research budget is used to pay for airfare, hotel and meals. Of course, you usually meet up with drug reps for even fancier meals. I did this 20 years ago, when I was a student at the University. Everybody knows the game. Except you, that is.
Too harsh? Well, let’s think about this logically. Consider the hundreds of millions of dollars raised for diabetes and breast cancer and heart disease and so on. What do we have to show for it? Almost all of the drugs developed for all disease are performed by drug companies.
All of the funding ever done at the universities adds up to a giant zero. While you might imagine that doctors and academics at major universities are immune to the influence of Big Pharma, you’d be exactly wrong. These institutions are on the take on a massive scale. They don’t simply take a few dollars here and there, they take millions of dollars.
The University of Colorado, for example, received $1 million from Coca Cola in order to establish an advocacy group that, surprise, surprise would downplay the risk of sugar. You, as the public would have assumed that this opinion exonerating sugar was coming from academic physicians who have thought long and hard and researched day and night about the best diet. You would have been exactly wrong. Their opinion, backed by the name of a prestigious university, is for sale to the highest bidder. These same doctors and researchers are always the ones talking about how you can’t trust all the opinions on the internet. Turns out, the last person to trust was them! Dr. Blair from the University of Colorado was busy blaming the media for the obesity crisis when he was taking blood money to fuel the crisis. They returned the money, but only when it was exposed in the New York Times. Otherwise, we would have been reading opinions that we believed were honest ones from university professors, but were nothing more than paid infomercials. 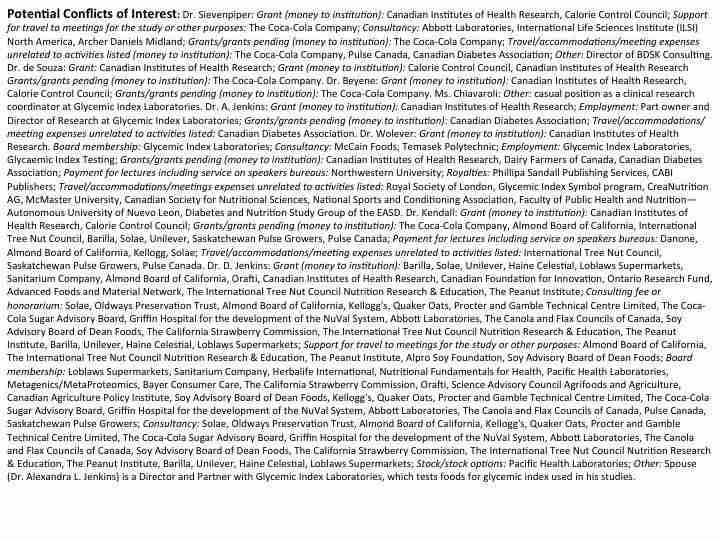 The list goes on and on. The Academy of Nutrition and Dietetics received $1.7 million from Coke. They represent the dieticians of America. Do they have our best interests at heart? No, you can’t bite the hand that feeds you. So sugar is fine and calories are the problem. Yes, because eating 100 calories of sugar and 100 calorie of broccoli are equally fattening. Right.
Coke has spent $120 million since 2010 to fund research. Research that will undoubtedly show that sugar is not to blame for obesity. This makes the few bucks the community doctor makes seem like chump change. $120 million dollars! And then the academics will bleat on and on about how we must follow evidence based medicine when the entire evidence base has been corrupted by commercial interests. 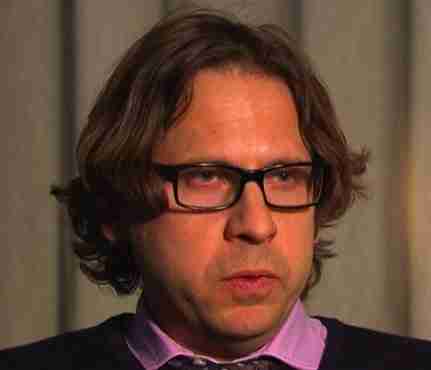 Consider the case of Dr. John Sievenpiper. He is one of the most outspoken, staunchest defenders of dietary sugar. He is constantly in the media defending sugar. Oh, it turns out he receives money from the Corn Refiners Association!  In his paper in the Annals of Internal Medicine defending, you guessed it, sugar, here’s his list of conflicts of interest.
So be careful who you listen to. There’s a lot of paid infomercials out there that you don’t even know about. Ultimately, you must decide who to trust based on their message, not their titles. Your life, very literally, depends on it.