This week, splashed all over the New York Times, was an article about a paper written by Kevin Hall, a senior researcher at the National Institute for Health. It was published in Obesity and titled “Persistent metabolic adaptation 6 years after ‘The Biggest Loser competition“.  This generated a lot of hand-wringing about the futility of weight loss. The study, along with another study presented by Kevin Hall seemed to generate more anxiety about the insulin hypothesis being dead. Of course, both these studies fit in perfectly with the hormonal view of obesity and reinforces once again the futility of following the Caloric Reduction as Primary approach. You could review my 50ish part series on Hormonal Obesity if you want a more in-depth view. So, let’s dive in an explain the findings of both of Dr. Hall’s excellent papers. His conclusions, well, let’s just say I don’t agree with them. The studies, though were very well done. I’ve written about the Biggest Loser diet previously, but here’s some expanded thoughts.

Let’s start with the first paper about the Biggest Loser. Essentially, he followed 14 Biggest Loser contestants. At the end of the show, they had all lost significant amounts of weight following a Eat Less, Move More approach. Contestants eat about 1000 – 1200 calories per day and exercise like mad people. What the study showed is that basal metabolism drops like a piano out of the Empire State building. It plummets. They are burning about 800 calories less per day than previously. This had been known for a long time. However, it was always hoped that the body would eventually recover and go back to its original metabolic rate. But unfortunately no, the metabolic rate does not recover even 6 years later.
In other words, if you reduce your ‘Calories In’, your ‘Calories Out’ will automatically drop. This makes sense. If your body normally eats 2000 calories per day and burns 2000, then what happens when you only eat 1200 calories? Let’s use the Socratic method and ask a related question. If you normally earn $100,000 per year and spend $100,000, what happens when your income drops to $50,000? Well, you are not stupid and don’t want to end up in debtor’s jail, so your spending drops to $50,000. Well, our body is not stupid either. If we are eating 1200 calories, we automatically adjust by burning 1200 calories. The body does not want to die, and neither do I. Why would we assume the body still burns 2000 calories? It’s just not that stupid. 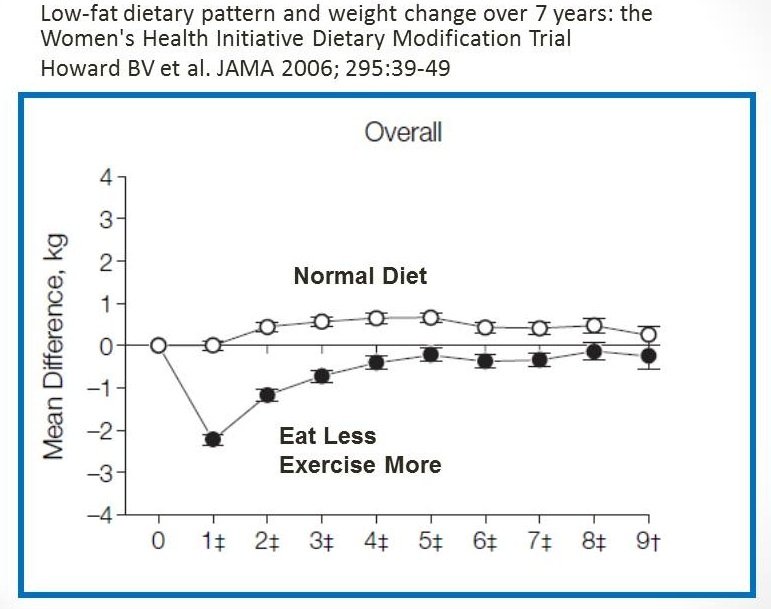 So, while we all obsess about reducing ‘Calories In’, it is virtually irrelevant for long term weight loss. It’s only ‘Calories Out’ that is important. If you can keep ‘Calories Out’ high, then you have a chance to lose weight. But Caloric Reduction as Primary (neatly abbreviated as CRaP), absolutely will not do it for you. This method is guaranteed to fail. This weight loss method, in the literature, has a 99% failure rate. In this study, 13 of 14 Biggest Loser contestants failed – a 93% failure rate. Pretty much expected
The Women’s Health Initiative study of 50,000 women proved this in 2006. Those women reduced their caloric intake by 350 or so calories per day. They expected to lose upwards of 30 pounds per year. Over 7 years, they lost …. 0.25 pounds! That’s like the weight of a good sized bowel moment, for goodness sake. Hmm. 7 years of Eat Less, Move More dieting or have a good BM? Same diff… This study definitively refuted the Calories In, Calories Out model, but didn’t fit pre-conceived notions, so it is routinely ignored.
That reducing calories causes basal metabolism to plummet was already proven long ago in the 1950s by nutritional history’s favorite whipping boy, Dr. Ancel Key. His famous Minnesota Starvation Study was not actually a study about starvation. Subjects were put on roughly 1500 calories per day diet. This represented about a 30% reduction from their previous diet. They were also forced to walk about 22 miles per week. So, this was a Biggest Loser approach – Eat Less, Move More on steroids. What happened to their basal metabolism? They ate about 30% less, and their basal metabolism dropped about 30%. They felt cold, tired, hungry. As they ate, all their weight came right back.
This is what is sometimes termed ‘starvation mode’. This is what people imagine happens as their body starts to shut down in order to conserve energy. Basal metabolism (Calories Out) falls and you feel like crap. As you eat less, your body burns less calories, so that eventually weight loss plateaus. Then you feel like crap, so decide to eat a bit more (your hunger hormones are also rising like a spire), but not as much as you used to. But, your ‘Calories Out’ is so low that you get weight regain. Sound familiar? Happens to every dieter out there. What’s unfair, is that their friends and family silently blame the victim of having ‘fallen off the wagon’, or not having enough will power. Actually, the dietary advice – Eat Less, Move More is guaranteed to fail. So don’t blame the victim when they actually do fail. 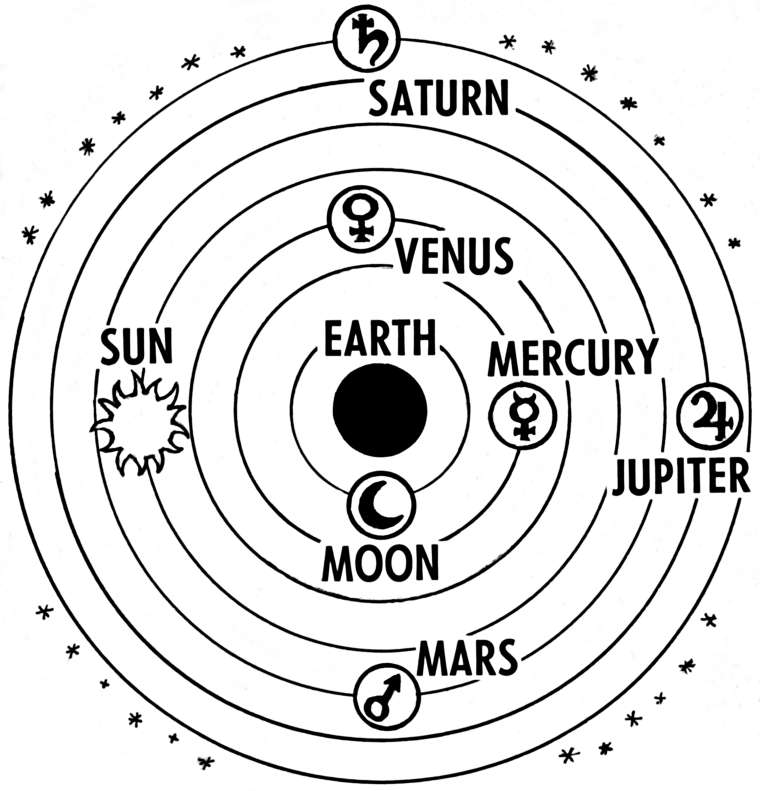 So the fact that Caloric Reduction as Primary leads to a decrease in metabolic rate is not exactly news. This has been proven for the last, oh, 65 years or so. But we’ve just chosen to ignore this inconvenient fact because our nutritional authorities, like Kevin Hall, keep bleating that you just need to cut calories. So, when it doesn’t work, they think it’s news. Slow news day, I guess. I mean, what’s next for the NY Times front page – Breaking News – New study proves the sun doesn’t revolve around the earth!
To me, what is stunning is how senior researchers and physicians can claim to be ‘stunned’ at these results. They are exactly what I expected them to be. This has been a consistent finding for the last half century.
So here’s what we’ve learned so far. 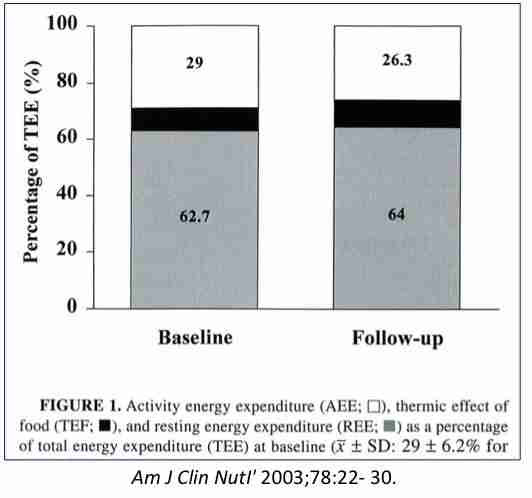 We need to keep basal metabolism high. How? What doesn’t put you into starvation mode? Actual starvation! We see metabolism sparing effect with studies of fasting and bariatric surgery.
What happens with bariatric surgery? This is also called stomach stapling. Because the stomach is the size of a walnut, people cannot eat. Their caloric intakes falls very close to zero. Fasting is the same except it is voluntary reduction of calories towards zero. What happens to basal metabolism? It is maintained! One of the Biggest Loser contestants in fact, did have bariatric surgery. What’s telling is that his metabolic rate started to go back up! Rudy Pauls had regained 80% of his weight before he got bariatric surgery. Then, his metabolism rate went up, whereas almost all the other competitors continued down.
Let’s think about what is happening here (you may also want to refer to my 26ish post series on fasting). As you fast, there are a number of hormonal changes that do NOT happen with simple caloric reduction. Your body senses that you are getting no food. Growth hormone surges. Noradrenalin surges. Insulin drops. These are so called counter-regulatory hormones that are natural reactions to fasting. They keep blood glucose normal. Growth hormones maintain lean mass. Noradrenalin keeps basal metabolism high. 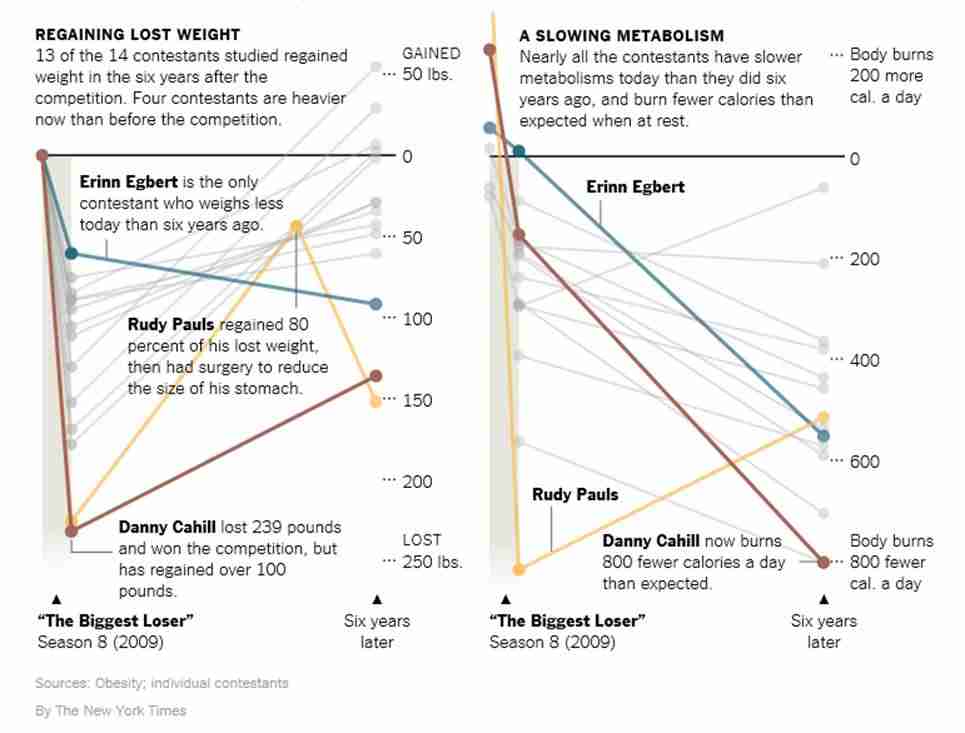 Studies of bariatric surgery show that metabolism does not drop as you can in the graph above.. Resting energy expenditure (calories out) is maintained despite severely restricted calories. Studies of fasting also show maintained metabolic rates. In 4 days of fasting, basal metabolism did not drop – instead, it is increased by 12%. Exercise capacity (measured by the VO2) is also maintained. 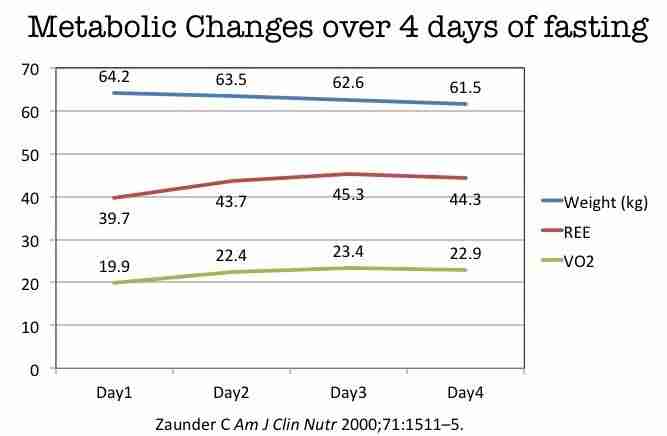 Let’s think about what is happening here. Imagine we are cavemen. It’s winter. We’ve eaten nothing for the past 4 days except for some yellow snow. (ahh dang it…). If our bodies go into ‘starvation mode’, then we would be lethargic, tired, and cold We would have no energy to go out and get food. Every day gets worse. Eventually we die. Nice. Why do we think our bodies are that stupid? I don’t want to die. 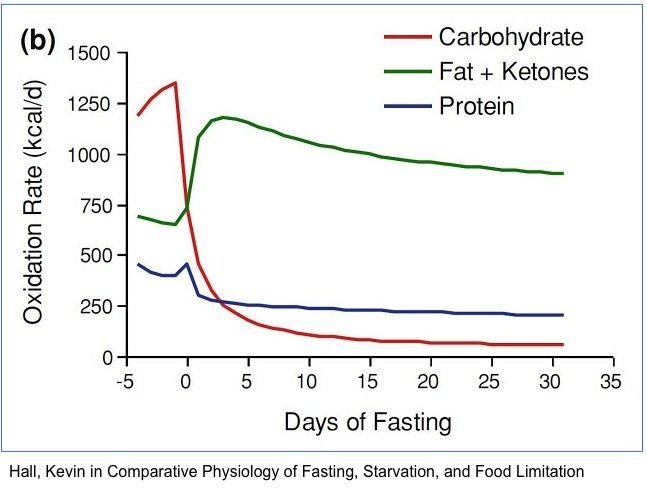 No, instead, what happens is that the body opens up its ample supply of stored food – body fat! Yeah! We keep basal metabolism high, and instead change fuel sources from food, to stored food (or body fat). Now we will have enough energy to go out there and hunt some woolly mammoth and beat up the guy who peed around the cave entrance. There is no ‘starvation mode’ with actual starvation. As long as your body fat stays about 4%, you are fine. But don’t you burn protein? No, here’s what happens according to Dr. Hall’s own study of fasting.
You stop burning sugar (carbohydrates) and switch over to burning fat. Oh, hey, good news – there’s plenty of fat stored here. Burn, baby burn. 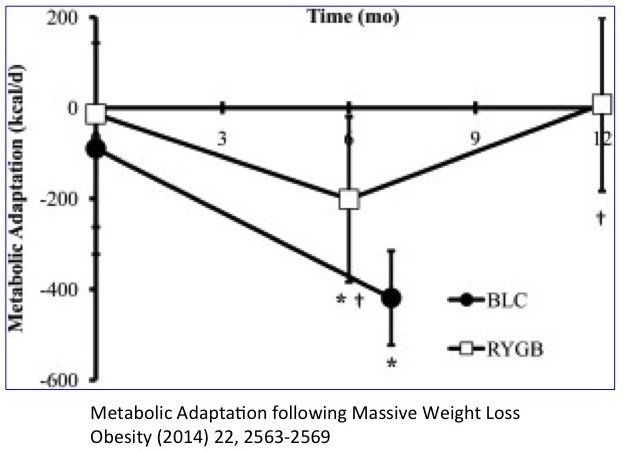 In fact, there has been a direct comparison of bariatric surgery patients with Biggest Loser contestants. In the graph, you can see that metabolic rate was measured in Biggest Loser contestants (BLC). Their metabolic rate just keeps going down, down, downtown. That’s what the New York Times reported, too. But look at the RYGB (Roux-en-Y bypass or bariatric) group. Their metabolic rate slows and then recovers. And that’s the difference between long term weight loss, and a lifetime of despair.
In a related poster, Hall presents data on the ketogenic diet. He measured fat loss on patients in his metabolic ward. He used either a regular diet or a ketogenic (very low carbohydrate diet). He showed that the ketogenic diet lowered insulin levels, people burned fat (measured by fat oxidation) and people lost more weight. Great. However, his fancy measurements of body fat also showed that the rate of body fat loss slowed down. So he said that this ‘proved’ that there is no metabolic advantage to ketogenic diets.
Nonsense. I have my doubts whether this DXA scan can actually detect the fractions of pounds of fat lost. Anyway, the main point is that people lost weight and were still losing fat. However, what he mentions in passing is far more interesting. He notes that the ketogenic diet did not produce any slowing of the metabolism.
That’s the gold medal, buddy!
Over 25 days or so, there is no slowing of metabolism??? That’s the most important part of long term weight loss! That’s the knife edge between success and failure. The difference between tears of joy and tears of sorrow. In the Biggest Loser, contestants had dropped their basal metabolic rate by 500 calories per day. In the ketogenic diet, they are still burning the same amount – EVEN AS THEY ARE LOSING WEIGHT.
So, let’s recap