Some would argue that the beneficial effect of fasting is due to the caloric reduction. But why is there such a striking difference between reducing calories and fasting? Caloric Reduction as Primary (CRaP) has been tried innumerable times, and failed virtually every single time. Yet fasting is often effective where simple caloric reduction is not. The short answer is that the beneficial hormonal changes that happen during fasting are entirely prevented by the constant intake of food. It is the intermittency of the fasting that makes it so much more effective. This prevents the development of resistance as detailed in the previous post.
Let’s compare the failed CRaP technique to the intermittent fasting (IF) one. Let’s quickly review the conventional advice to portion control, or reduce daily caloric intake. We often hear the advice to simply reduce 500 calories a day and expect to lose 1 pound of fat per week. Success is as rare as humility in a grizzly bear, but that doesn’t stop well meaning, but idiotic health professionals from recommending it. After all, who hasn’t tried to portion control strategy of weight loss. Who has been able to maintain long term weight loss? Does it work? No.
It is always a little surprising to me how fervent the calorie believers are. From a purely practical standpoint, consider this. We, as medical professionals, have advised people for at least 40 years to control their calories. We tell them that is all about Calories In, Calories Out. Technically true, it turns out that the Calories Out, the part we do NOT control is vastly more important than Calories In. Nevertheless, doctors such as Dr. Katz, continue to advise cutting their calories and pretend that they will lose weight. 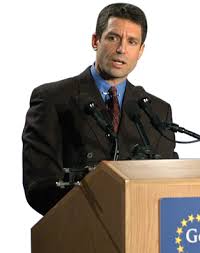 But it has never worked. The failure rate is 98%. Practical personal experience shows that this is likely to be true. So, whatever else you may believe, caloric reduction DOES NOT WORK. This is a proven fact. Proven in the bitter tears of a million believers. But, no matter how many times I tell a calorie enthusiast, I get the uncomprehending gaze of an anxious monkey.
So, what happens with this CRaP strategy? A detailed review can be found in the Calories series earlier. Essentially, the body tends to maintain a body set weight (BSW).  The body is initially able to lose some weight. However, as weight goes down, the body compensates for this weight loss by trying to regain the lost weight. Hormonal mediators of hunger (ghrelin) increase. This means that measures of hunger and desire to eat increase. This happens almost immediately and persists almost indefinitely.
Next, the body’s metabolism starts to shut down. In response to a 30% decrease in calories, there is a roughly 30% decrease in total energy expenditure. We start to feel tired, cold, and we have little energy for things like exercise.
As the body’s TEE decreases, the weight loss starts to slow down and then plateau. Eventually the weight starts to go back on, even as we continue to follow the diet. So the metabolic adaptations to CRaP is an increase in hunger and a decrease in basal metabolism. So, as you diet, you feel hungry, tired, cold and generally miserable. Does this sound familiar to any dieters? Probably sounds familiar to every dieter. This is what Dr. Ancel Keys had shown decades ago in his Minnesota Starvation Experiment.
The worst part is that this strategy is guaranteed to fail. It has been proven by science long ago. The huge 50,000 woman randomized trial (Women’s Health Initiative) of the low fat low calorie diet proved to be an utter failure for weight loss. The problem with this strategy is that it does not address the long term problem of insulin resistance and high insulin levels. Since the insulin sets the ‘BSW thermostat’ – the body keeps trying to regain the lost weight.
Here’s the bottom line. As you reduce calories, appetite goes up, and TEE goes down. You reduce Calories In, but Calories Out goes down, too. This is failure guaranteed 100%. It’s as stupid as cracking the safe of your own bank.

As we recently detailed in the fasting series, the hormonal changes that happen in IF are completely different. In contrast to CRaP, during fasting, appetite goes down and TEE goes up. The body is trying to lose weight and helping you along. The main point is that it addresses the long term problem of insulin resistance. During caloric reduction alone, you do not get any of the beneficial hormonal adaptations of fasting.

The hormonal adaptations are completely different, as we have discussed so far in this series. Glucose and insulin go down and stay down.
During IF, the intermittent nature of the intervention helps to prevent the insulin resistance problem. A recent trial – The effects of intermittent or continuous energy restriction on weight loss and metabolic disease risk markers: a randomized trial in young overweight women – compares CRaP to IF. In this study, 107 women were randomized to two strategies.  The first was a 25% continuous energy restriction (CER) – similar to the CRaP strategy of portion control. The second strategy was intermittent energy restriction (IER). Patients were allowed normal intake on 5 days a week, but only 25% of their usual calories on 2 days of the week – very similar to the 5:2 diet of Dr. Michael Mosley.
Let’s assume the usual caloric intake was 2000 calories per day. With CER, calories are reduced to 1500, or 10,500 calories over 1 week. With IER, weekly calories are 11,000 calories per week. So this study effectively keeps caloric intake steady – or even favouring the CER group slightly. The basic diet was a Mediterranean style diet with 30% fat. 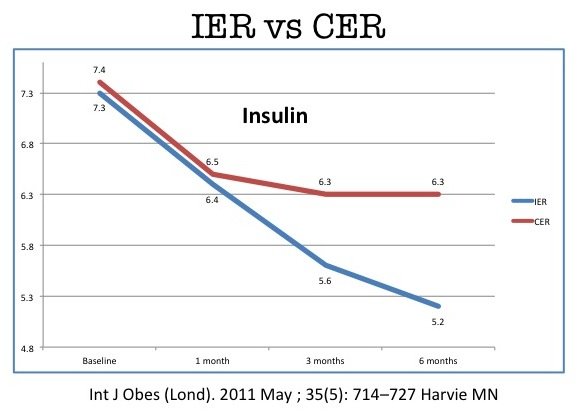 Over 6 months, what were the results? In terms of weight loss and fat loss, there were no significant difference although the IER tended to do better (5.7 vs 5.0 kg weight loss, 4.5kg vs 3.2kg fat loss).
But the real important part of the study was the effect on insulin and insulin resistance. After all, I’ve spent the last 60+ blog posts arguing that insulin and insulin resistance are the key factors in obesity and weight gain. 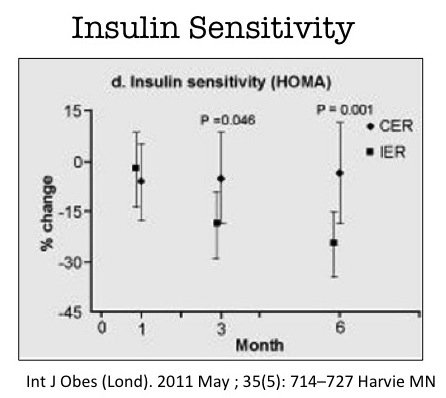 What happens to insulin levels? Well, there is a clear, substantial improvement in insulin levels favouring the IER group. Even more impressive is the change in insulin resistance. This is measured by HOMA, which is a comparison of fasting glucose to fasting insulin.
In the CER group, there is virtually no change in their insulin resistance (IR). Because there is no change in IR, this will continue to lead to higher insulin levels in a vicious cycle. These higher insulin levels perpetuate the higher IR.
This is the long term problem of weight loss. This is exactly the part of the equation that is typically ignored and leads to the typical weight regain. It is the intermittency of the diet that makes it effective.
We can look back at human history. Fasting has been used for the last 2000 years as a tremendously effective method of controlling obesity. Portion control (CRaP) has only been used extensively for the last 50 years with stunning failure. Yet, pundits such as Dr. Katz and others continually scream at us through books, TV, and online to reduce calories. Don’t they think we’ve tried that?
But the one strategy that does help, fasting, is continually belittled as a dangerous practice akin to blood letting and voodoo. The problem with most diets is that they ignore the biological principle of homeostasis – that is the ability of the body to adapt to changing environments. The body has a preferred state. If you move away from it, the body will adapt to it. For example, if you are in a dark room and suddenly go into the bright sunlight, you will momentarily be blinded. However, within moments, your body will adapt.
The same applies to weight loss. If you try to keep a constant diet, the body will adapt to it. This means that successfully dieting requires an intermittent strategy, not a constant one. This is a crucial difference.
The difference is between restricting some foods all the time (CER) and restricting all foods some of the time (IER). This is the difference between failure and success.
Start here with Fasting part 1
Continue with Fasting part 10