The prevailing theory of cancer, accepted by practically all the oncologists and researchers in the world, over the last 5 decades is that cancer is a genetic disease. This is termed the somatic mutation theory (SMT), which theorizes that a cell develops mutations that allow it to become cancerous. This requires multiple ‘hits’. That is, a single mutation is rarely sufficient to provide a normal cell everything it needs to become cancerous. For example, a normal breast cell may develop a mutation that allows it to grow, but it needs other mutations to escape detection by the immune system, grow blood vessels etc. So it needs multiple mutations to become a problem cancer.
So the basic theory of SMT is that 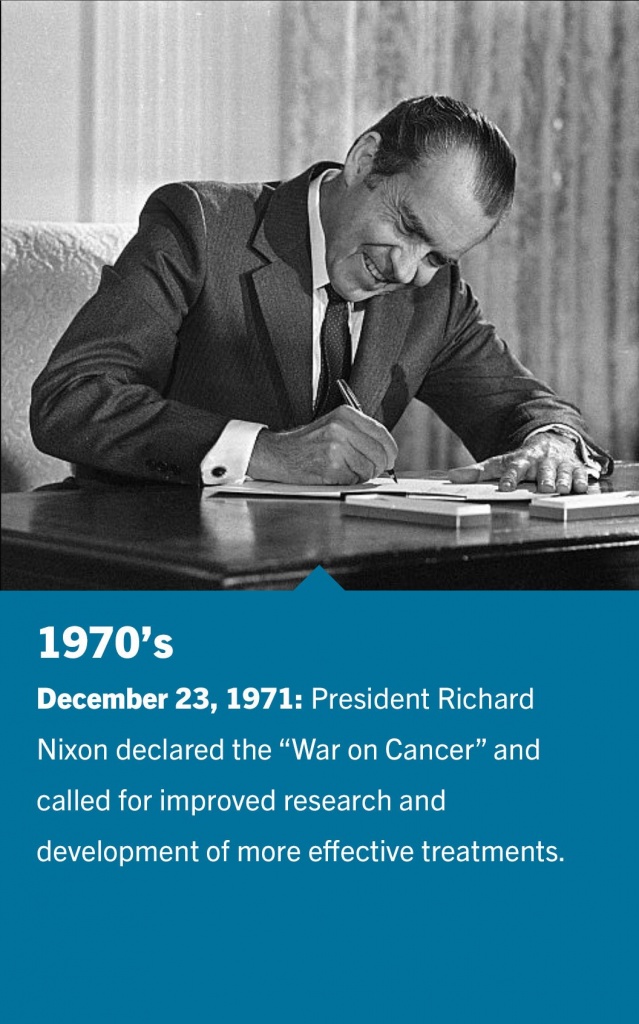 This is the basic theory I was taught in medical school. This is the prevailing paradigm of cancer, which essentially colors how all data is interpreted. If you get the paradigm wrong, everything else that follows is wrong. Just as in nutrition and obesity – if you follow the ‘calorie’ paradigm, then everything is interpreted in the view of calories. Get that wrong, and you get the current obesity epidemic.
In 1971, US President Richard Nixon declared war on cancer. This was his ‘moon shot’ even if he didn’t call it that (Joe Biden would be more explicit and call it that). The amount of resources poured into understanding cancer over these last 45 years is staggering. Yet we are no closer to a cure than we were in 1971. Sad, but true. The only way to have such a crappy, crappy result is to start from the wrong paradigm.
So, while there have been major advances in understanding cancer at a genetic and molecular level, there is little good news on the clinical front, with a few exceptions, such as in certain leukemias. This success has elevated genes to a special revered status in the public perception of cancer. This translates into research funding to tackle the genetic basis, such as The Cancer Genome Project, all of which takes our ‘eye off the ball’ with regards to other factors equally important for cancer development. It’s a distraction. In fact, the relatively minor importance of genetic factors in common cancers is plainly evident to see. 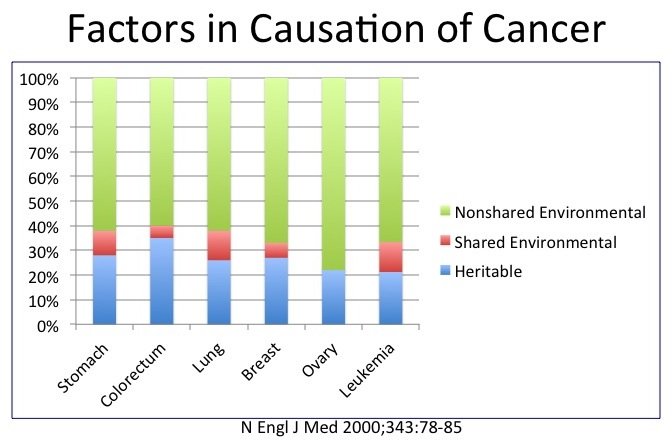 The clearest evidence against a predominantly genetic basis for cancer comes from twin studies. Identical twins share identical genes, but and also share similar environmental influences if brought up together. Fraternal twins only share 50% genetic material on average, the same as any siblings. By comparing these two groups, you can get an idea of how important genetic factors are to the development of common cancers such as breast, colorectal, prostate etc. Luckily, in Sweden, Denmark and Finland, they keep registries of these twins and data on 44,788 pairs of twins were reviewed. The effects were defined as genetic, shared environment (eg. passive smoking, similar diets) and non-shared environment (eg. occupational exposure, viral infections).
The overwhelming majority of the risk in the causation of cancer is NOT genetic. This holds true even for breast cancer where we often think of the BRCA1 gene as a ‘breast cancer death sentence’. In fact, this only accounts for an underwhelming 27% of risk. This holds true for all cancers. For most cancers the attributable risk is only 20-30%. Environmental risk factors accounts for the majority of risk in all cases of cancer.

This is clear from migration studies. As we previously saw, the risk of breast cancer in a Japanese woman in Hawaii is far higher than that of a Japanese woman in Japan. Clearly, the genetics are identical but the environment is not. The overwhelming problem is environment.
In 2004, in the New England Journal of Medicine, Dr. Willett, from Harvard, published a small article noting the rising incidence of breast cancer in Japan. From 1946 to 1970, the incidence of breast cancer more than doubles. That might be interesting, although by itself you might believe it to be the effect of Enola Gay’s fiery kiss (the atomic bomb). But what is fascinating is that increased height is consistently associated with increased risk of breast cancer. What’s the link?
If you look at the steady increase in height in Japanese women, it parallels the rise in breast cancer. Once again, it must be an environmental effect – mostly diet related. One common factor may be levels of insulin-like growth factor 1. If you have higher levels of hormones producing growth, you will get increased height, but also set the stage for other things that grow. Things like breast cancer.

Height is not the only thing growing in children. If you have eyeballs that grow too large for their optimal focal length, then you get myopia, or near-sightedness. Over the past few decades we have seen a huge increase in the number of myopia cases.
Look around. I wear glasses. I got teased mercilessly as a child in public school because well, I was a nerd. But more than that, I was one of the very few kids wearing glasses. How about today? Looking around my son’s class, (yes, I somehow suckered my beautiful wife into marrying little old nerdy me) I estimate that a third of the class wears glasses. Nobody gets teased for it, because everybody wears them. Last year, my 9 year old niece wore glasses with clear lenses simply as a fashion accessory. Why has myopia increased so much? It is not genetic, obviously, since it happened within a generation. We’re lucky we haven’t spent millions of research dollars with experts trying to ‘prove’ that myopia is a bunch of random mutations that happened simultaneously in the world.
The answer is not actually known, but I suspect that excessive growth factors, including insulin may play a large role here. Too much growth, in general, is not always good. Yes, people got taller. But they also got more myopia and breast cancer. 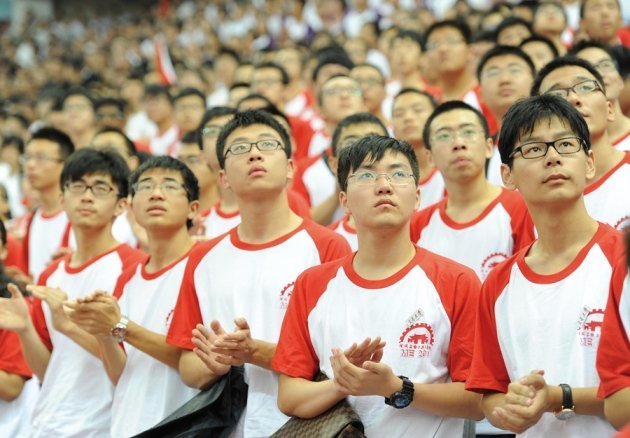 But that the environment is the overwhelming risk factor and not genetics is not news. 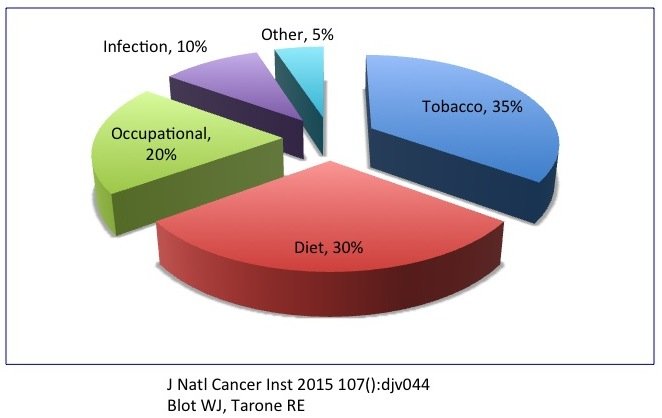 Even as early as 1981, Sir Richard Doll and Sir Richard Peto of Oxford University, looking at the causes of cancer suggested that 30% was attributable to smoking, but that 35% was due to diet. In 2015, researchers looking back at this seminal work suggested that these estimates were “Holding generally true for 35 years”. This report was commissioned by an office of the US Congress mostly to look at the role of occupational risk (asbestos).
Smoking was the most important risk factor, but diet ran a very close second at 30%. What exactly was the problem with the diet, the researcher could not determine at that time. The other major risk was occupational exposure (20%), including asbestos, dust, radiation. Infection was a small player at 10% including bacteria (H. Pylori), and viruses (Human Papilloma Virus, Hepatitis B and C, Epstein Barr Virus).
That leaves a minuscule 5% of population attributable risk to everything else including genetics, bad luck, chance and the like. This leaves over 90% of the risk of cancer as occupation, but more importantly preventable. This directly contradicts the prevailing feeling that cancer is mostly a genetic lottery and this learned helplessness that there is nothing to be done to avoid the second largest killer of Americans.
It is clear that any preventive effort must focus on these factors identified. There is little controversy that

Therefore, any efforts must focus squarely upon the diet, because anything else, including trying to ‘hack’ your genetics will have minimal benefits. The link between diet and cancer is a singularly important one, but singularly ignored in the rush to proclaim cancer as a genetic disease of accumulated random mutations.