Cancer as an endocrine disease – Cancer 3

Richard Nixon declared war on cancer in 1971. It’s been close to half a century, and the war is hardly close to being won. If you simply look at how many people have cancer, things look quite bleak. However, this is not quite accurate. Cancer screening has increased significantly in the past decades – with increasing adoption of procedures such as mammography and colonoscopy. As you detect cancer earlier, there seems to be more cancer in society. But there is actually the same amount of cancer, you are just finding more of it.
So the most unbiased assessment is to simply count the number of deaths, although this, too is not entirely accurate. One of the most important risk factors for the development of cancer is age, and as life expectancy increases, cancer mortality as a percentage also increases. You can adjust crudely for age, though, and the results are not good.
In heart disease, for example, the advances in surgery, angioplasty, smoking cessation and medications (beta blockers, aspirin, and ACE inhibitors) have combined to reduce death rates from heart disease over the last 40 years. But the news in cancer is far more bleak. While the cancer death rate in those less than 65 has improved, it has barely budged in those over 65, which constitutes the vast majority of disease. As a percentage of death, cancer was 18% in 1975 and 21% in 2013. Not good.
This is made worse by the fact that cancer is far, far more prevalent in the older age group (>65 years). So progress is being made in the younger ages, where cancer is more likely to be a genetic mutation, but not in the older age group. 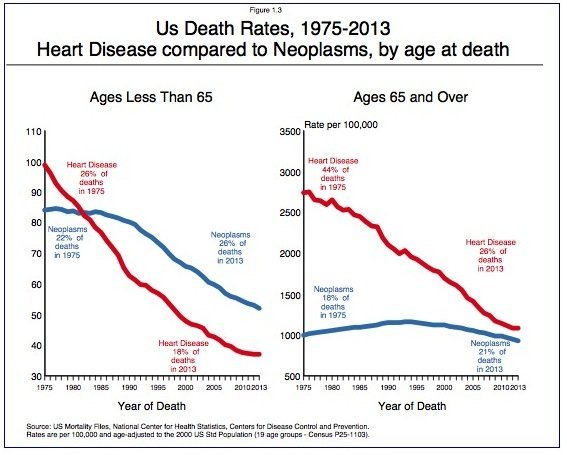 This is despite the tremendous progress made in medical genetics. We’ve sequenced the entire genome of man. We’ve even sequenced the entire genome of multiple cancers with the wildly expensive and optimistic Cancer Genome Atlas. You can even get personalized genetic screens for various diseases. We are now able to develop specific antibodies against virtually any protein in the body. But none of this actually helped.
Where did we go wrong? The big mistake (spoiler alert) was the perception of cancer as a disease of accumulated genetic mutations. When you approach a problem from the wrong angle, you have no chance of seeing the solution. If you are running in the wrong direction, if doesn’t matter how fast you go. No, cancer is not just a genetic disease. You must approach is as an endocrine (hormonal) disease. 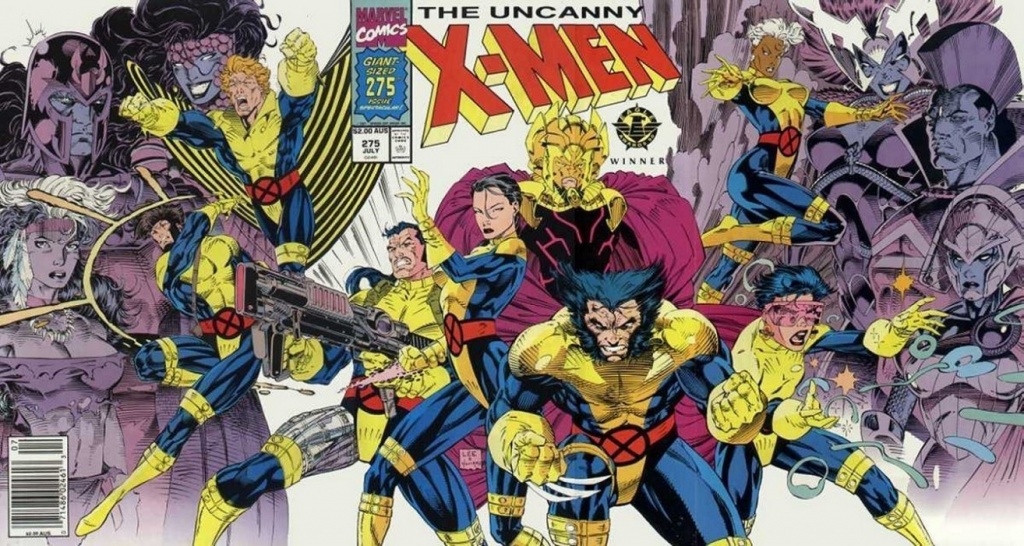 Cancer is commonly perceived by both the public and the majority of oncologist (cancer specialists) and researchers as a genetic disease. This is called the somatic mutation theory (SMT). We know that cancer cells contain many different mutations in genes known as oncogenes and tumor suppressor genes. It is believed that cancers develop because of a collection of genetic mutations that happen randomly. That is, a cell slowly, over decades collects a number of random mutations that give it super-powers, like becoming immortal, gain the ability to evade the body’s defences, gain the ability to spread outside its normal boundaries, gain the ability to grow new blood vessels when needed, mutate and develop resistance to chemotherapy etc.
When you think about it that way, it seems about as unlikely as humans mutating and gaining the ability to shoot laser beams out of our eyes, or stick to walls like a spider. I mean, I’d rather have claws like Wolverine than grow cancer. And it’s just as unlikely. Yet we accept this unlikely feat from cancer cells each and every day.
But there are many lines of evidence that prove that cancer cannot simply be a genetic disease. Diet is a prime example. There is consensus that obesity contributes to certain cancers. No single substance in the diet, though shows a strong enough correlation to mark it clearly as a carcinogen, other than some rare stuff like aflatoxin. Not dietary fat, red meat, or carbs can be clearly linked to cancer. Yet together, an estimated1/3 of British cancer deaths may be preventable by dietary measure (Peto, Nature 2001). An American expert panel also recently came to a similar conclusion. 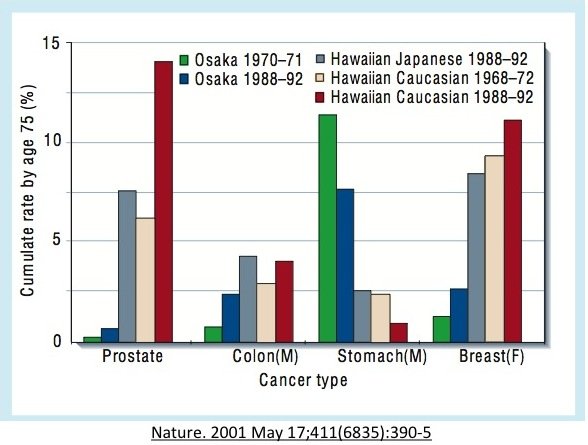 While the exact nature of those dietary changes are debatable since no standard, widely consumed food is known to be particularly mutagenic (causing genetic mutations, like ionizing radiation).
Migration studies are a clear example of of the environmental influence on cancer rates. Japanese immigrants to the United States almost immediately develop the cancer risk of an American. Since their genetic makeups are largely unchanged, any change in risk is largely environmental/ dietary. Compare the risk of a Japanese person in Japan (Osaka 1988) to a Japanese person in Hawaii. The risk of prostate cancer has gone up by 300-400%! The risk of breast cancer more than triples!
So here’s the paradox. If the risk of a Japanese woman in Hawaii is 3 times the risk of a Japanese woman in Japan, then why on earth would we consider cancer to be primarily a genetic disease? That makes no sense at all. If we think cancer is caused by a collection of random genetic mutations, then why are the genes mutating like crazy in Hawaii? Is it bathed in ionizing radiation? There’s lots of cancer in Hawaii, but where are the freakishly strong people who fly? 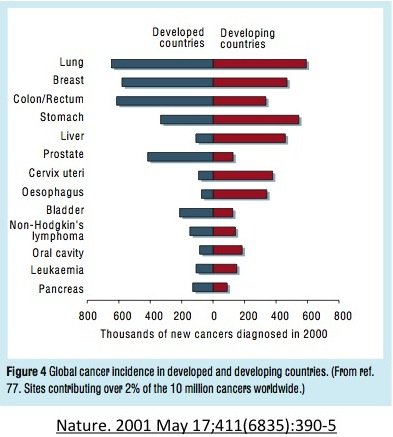 Compare the cancers found in developing versus developed nations. There are huge discrepancies that simply cannot be a genetic effect. Cancer of the esophagus, for example is almost purely found in developing nations. But these risks change based upon migration. If we use the somatic mutation paradigm, we will miss very important effects that could potentially lead to prevention/ treatment.
You know what else shows a very strong migration effect? Obesity. While studies are generally difficult to do, the available data suggest that immigration carries huge risk. For example, immigration from Pakistan to Norway increases Body Mass Index by 4.9 (that’s a huge increase). Caucasian immigrants to Canada are 15% less likely to be overweight, but this risk gradually increases with duration of living in Canada. By 30 years the risk is identical. 30 years is a very short time to see any type of genetic mutation, but plenty for dietary issues.
There are clearly other variables here – like the exposure to carcinogens (asbestos), or viruses (Human Papilloma Virus) that may explain the variability in cancer rates. The point is simply this. The Somatic Mutation Theory is almost certainly wrong. These mutations are unlikely the primary driver of cancer. This myopic focus on genetic mutations has consumed vast quantities of resources (money and research efforts and brain power) and it all leads to a complete dead end. We are barely better off in 2017 than we were in 1971 with regards to cancers in adults. That’s sad, but true. Only when we face these sobering facts can we start looking for the true nature of cancer elsewhere – as a metabolic, endocrine disease.