You can’t handle the truth!

Sometimes the truth is hard to take. In the movie, A Few Good Men, Tom Cruise plays a military lawyer trying to find out the truth about a murder. He continues to press Jack Nicholson for the ‘truth’ until, exasperated Nicholson shouts one of his most enduring quotes ‘You want the truth? You can’t handle the truth!’. 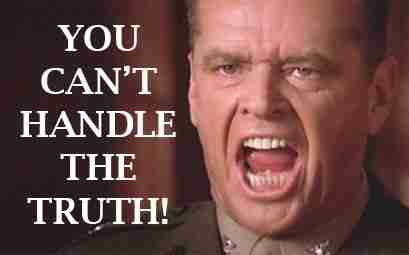 What Nicholson means is that there are many times in life where the truth is hard. We try to spare people’s feelings by covering up the truth. For example, families often ask that patients are not told of their diagnosis of cancer. We tell children that Grandpa has ‘gone away for a long time’ instead of the the truth that their beloved one has passed on. We do this all the time because ‘we can’t handle the truth’. There were many people willing to turn a blind eye to the Holocaust because they couldn’t handle the truth.
However, just as in the movie, only the truth will set us free. Only by understanding and accepting the truth can we hope to move past it. Too often, hiding the truth only hurts those who we hope to protect. Believing the lies, we cannot make rational decisions. In essence, we make the same argument that Jack Nicholson makes in the movie. Because you can’t handle the truth, Big Brother will forcibly hide it from you.
In science, the need for openness is well understood. Galileo, for example, was persecuted because of his beliefs. Using observations from his new telescope, he supported Copernicus’ idea that the earth revolved around the sun, rather than the universe revolving around the earth. In 1632, Galileo published his scientific observations, which unfortunately clashed with the beliefs of the Roman Catholic Church. He was tried in 1633 for heresy by the Roman Inquisition and found guilty. He would spend the remaining years of his life under house arrest instead of furthering mankind’s knowledge.
For this reason, science abhors censorship above all else. We may not always agree. We may not always be civil. However, each side certainly recognizes the right of the other to his/ her point of view. For example, I might not agree with Gwenyth Paltrow that vagina steaming is useful, but I don’t deny her the right to freedom of speech. Many times in health care, we hope that the medical authorities also recognize the need for discussion and dialogue. Unfortunately, too frequently, those in authority resort to bullying and silencing of critics by brute force rather than reason and intellect. 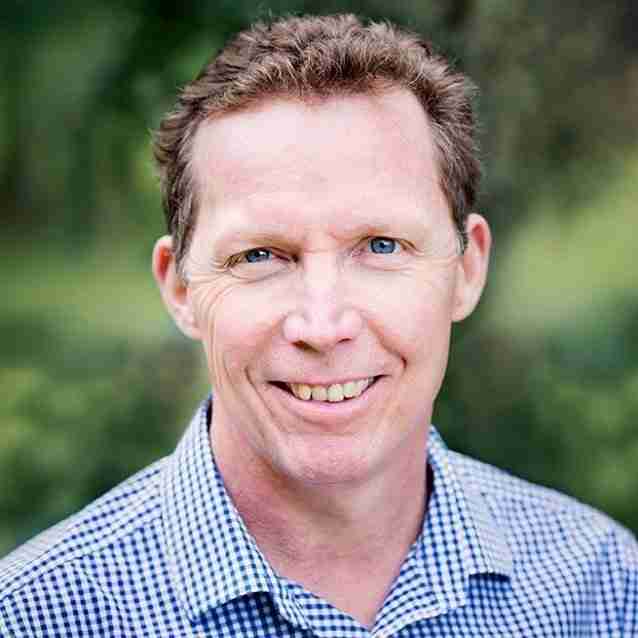 When Nina Teicholz published her controversial article in the BMJ, arguing that the US Dietary Guidelines were not scientific, her critics (Dr. Frank Hu from Harvard) responded, not by reasonable argument, but for a call for retraction. He was trying to stifle the conversation rather than face insubordination. In a bullying tone, Dr. Hu is, in essence, saying to the rest of the scientific community ‘You can’t handle the truth’. Dangerous. Very dangerous. We’re lucky he didn’t try to pull a Galileo and put Nina under house arrest. Rather than bravely try to face off in scientific discourse, the cowardly Dr. Hu called for censorship instead.
But unfortunately, the examples continue. The latest victim is my friend, Dr. Gary Fettke, an orthopaedic surgeon from Tasmania. A brain cancer survivor, he has lectured around the world about the importance of nutrition in chronic diseases such as cancer. I met him in Cape Town, South Africa where he impressed me, not so much with his boyish good looks (alright, not very much at all for this) but his deep understanding and passion for nutrition. As fellow doctors, I fully understand the critical importance of nutrition in metabolic disease.
Gary started the Nutrition for Life clinics to help guide patients along the path of proper nutrition. He was sick and tired of amputating diabetics limbs when the disease is so easily managed with proper nutrition. I had the exact same epiphany a few years ago. I was sick and tired of putting diabetics on dialysis when the entire debacle is preventable with a proper understanding of nutrition.
Just this past week, the Australian Health Practitioner Registration Agency delivered a gag order in a 14 page email. He has been ordered silenced. “In particular that he does not provide specific advice or recommendations on the subject of nutrition and how it relates to the management of diabetes or the treatment and/or prevention of cancer.” So, Gary, a physician is not felt to be qualified to give health advice. So your hairdresser can give you diet advice, but a highly qualified physician cannot. Unfortunately, this is not a joke. 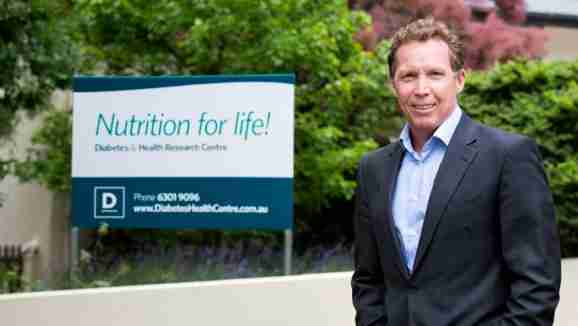 What was this dastardly advice, so dangerous that the AHPRA felt compelled to issue the gag order? Well, Dr. Fettke feels that you should reduce intake of dietary carbohydrates, and eat plenty of healthy fats, but mainly to avoid processed and artificial foods to eat whole, unprocessed seasonal, local foods. OMG! What??? That’s totally ….. reasonable.
His notification was anonymous. It is unknown whether anybody was actually harmed by this, uh, pretty well accepted dietary advice. He also does not know which peers are judging him. He is not to communicate via social media. He is not to talk or lecture or speak to his patients about nutrition. His accusers cower behind the AHPRA, unwilling to make themselves known. All while trying to stifle conversation and yelling at the Australian public ‘You can’t handle the truth’!
This is even more bizarre because many guidelines have enshrined recommendations exactly as Gary espouses. For example, in the United Kingdom, the Dec 2015 NICE guidelines state:

‘Treatment and care should take into account individual needs and preferences. Patients should have the opportunity to make informed decisions about their care and treatment, in partnership with their healthcare professionals’
1.3.3 Encourage high‑fibre, low‑glycaemic‑index sources of carbohydrate in the diet
1.3.6 Individualise recommendations for carbohydrate and alcohol intake

Ahhh. Doctors should individualize recommendations and low carbohydrate diets are reasonable. Patients should also make INFORMED decisions. Weird that NICE doesn’t say “Health authorities should censor doctors and dictate diets to patients and even prohibit diets used all over the world by institutions like Harvard University. Patients should not hear dissenting opinions because YOU CAN”T HANDLE THE TRUTH!” Weird, huh?
The Academy of Nutrition and Dietetics in the United States recently submitted its 2015 guidelines to the US Department of Agriculture. The AND, representing the dieticians of the United States, supported the decision to remove cholesterol from the nutrient of concern list and further advised to remove saturated fat as well. Monounsaturated fats, found in olive oil and avocados and nuts, are almost universally acknowledged to be healthy. So, they don’t feel that the ‘Eat more Fat’ message is really all that controversial.
Dr. Osama Hamdy, the medical director of Harvard’s world famous Joslin Center for Diabetes obesity program, has called for a nutrition revolution using lower carbohydrate diets. He has been using them for over a decade.
In the end, what is sad is that the AHPRA opted for censorship rather than transparency. Playing the part of the Roman Inquisition,they have told the Australian people “We are Big Brother, and we will tell you what you will or will not eat. What’s more – you will like it and then thank us for it!”
We hope that Australia continues to be a part of the Free World, instead of a champion of censorship. Stop patronizing your people. Give them the freedom to listen to whomever they like. This is not Stalinist Russia. This is not Nazi Germany. We should listen to all the doctors, the ones who agree and the ones who don’t. Then give people the freedom to choose who they follow.