Saturated fats turned out to be not quite as toxic as we had believed once the trans fats were stripped out.  But many studies pointed out the fact that there is a chance that they may actually be protective against heart disease.  The study “Dietary fats, carbohydrate, and progression of coronary atherosclerosis in postmenopausal women” examined the angiographic progression of coronary disease in relationship to diets. 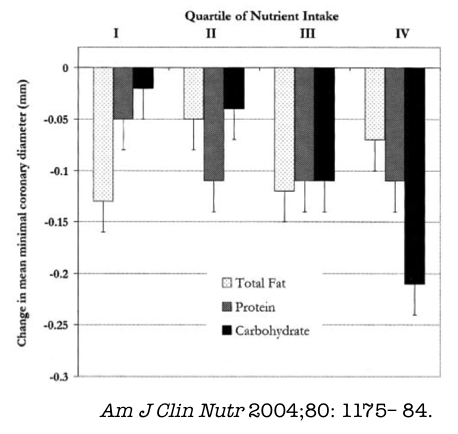 An angiogram is a standard heart test where dye is put into the arteries around the heart to determine if there are any blockages.  Looking at 235 women with established heart disease, they measured baseline angiograms and repeated them in an average of 3.1 years.  They then looked at the diets of these women to see if there were any patterns.
Dividing these women into groups according to their intake of fats, there appears to be no relationship whatsoever.  The women eating the most fat had slightly less blockages than those eating the least.
The one macronutrient that stands out as particularly sinister is carbohydrates.  The highest intake of carbohydrates is associated with the highest level of heart blockages.  Not looking too good for the Diet-Heart hypothesis.  The people who were eating the American Heart Association approved low fat diet were getting the heart disease.  The people eating the frowned-upon high fat diets were not. 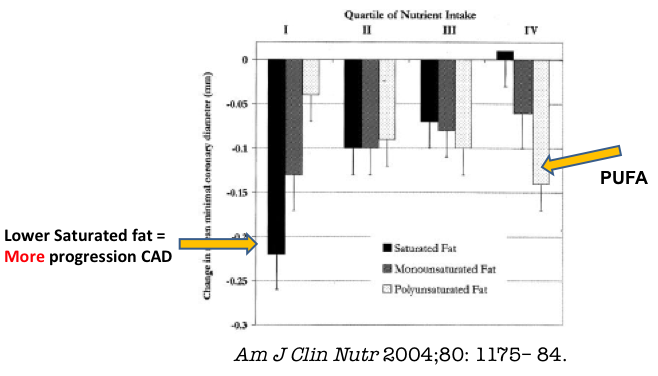 The types of dietary fat were further divided to see if the all natural saturated fats were indeed dangerous to human health.  The group eating the most saturated fat had regression of their blockages.  Their heart disease was melting away!  On the other hand, the group eating the least saturated fats had the most progression of their disease.
Looking at the industrial vegetable oils, it appears that eating more of these oils tended to be associated with more progression.  Wait a friggin second.  Weren’t these vegetable oils supposed to be ‘heart-healthy’?  Wasn’t the saturated fats supposed to be clogging arteries?  It looks like the effect is the exact opposite of what we were taught.  This wasn’t just some rinky dink study either.  It was written by Dr. Mozaffarian from a little school known as Harvard.  Saturated fats weren’t bad, they were good for health. 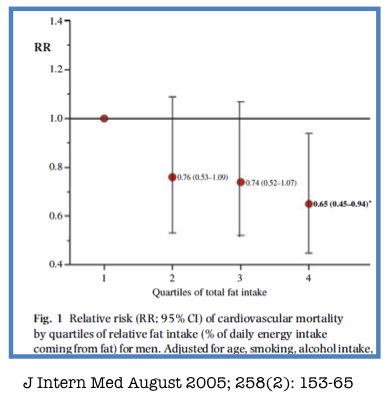 Another large study “Dietary fat intake and early mortality patterns – data from The Malmo Diet and Cancer Study” followed over 29,000 subjects over 6.6 years.  Among the women, increasing saturated fat intake was associated with a significantly lower risk of dying of heart disease.  Again, not looking too good for the Diet-Heart Hypothesis.  Eating saturated fat doesn’t really appear to be harmful in any way.
The same results were seen in the study ”Dietary intake of saturated fatty acids and mortality from cardiovascular disease in Japanese“.  Following a cohort of 58,543 Japanese men and women over 14.1 years, the researchers looked at the the relationship between heart disease, stroke and saturated fat intake.  Not surprisingly, there was an inverse relationship.  That means that eating more saturated fat protects against heart disease and stroke.  In 2014, the Japan Collaborative Cohort Study found virtually identical results.  From their conclusions, “total mortality was inversely associated with intakes of saturated fatty acids (SFA)”.  Yes, saturated fat is not bad for you, it’s good for you. 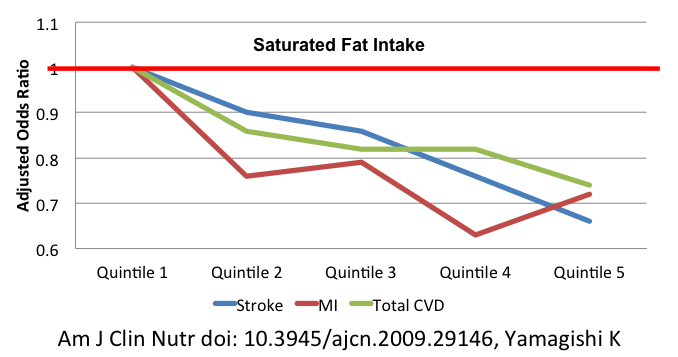 Several large scale and highly publicized meta-analyses have been done on all trials to date regarding saturated fat.  In 2009, Dr Krause published, “Meta-analysis of prospective cohort studies evaluating the association of saturated fat with cardiovascular disease“.  After careful analysis of 21 studies covering 347,747 patients, he concluded:

Furthermore, there was a small but significant protective effect on stroke.
Dr. Chowdhury in his paper  “Association of Dietary, Circulating, and Supplement Fatty Acids With Coronary Risk: A Systematic Review and Meta-analysis” came to much the same conclusions.  While trans fat increased the risk of coronary disease, saturated fat did not.  There was no concern that polyunsaturated fats were causing disease.  Yet.
Polyunsaturated fats contain both omega 3s and omega 6s.  While both are found in nature, our current diet may be heavily and unhealthily skewed toward omega 6s.  Dr. Ramsden decided to analyze all the studies to date regarding polyunsaturated fats, but divided the fat and published the paper, “Use of dietary linoleic acid for secondary prevention of coronary heart disease and death“. 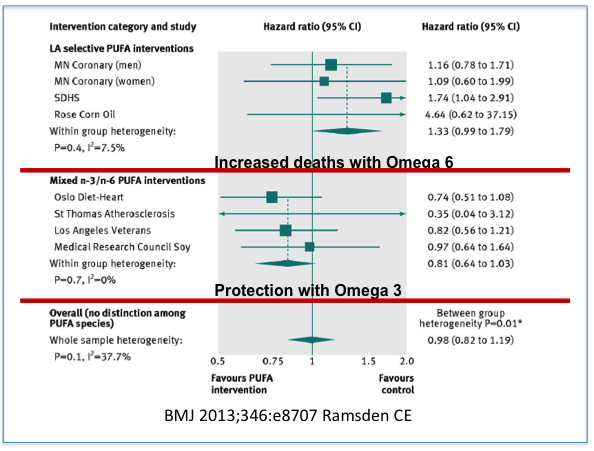 The overall picture showed no increase risk of death with polyunsaturated fat.  However, upon closer inspection, you can see that those trials that increased omega 3 consumption showed protection against heart disease.  Those studies that increased omega 6 consumption increased heart disease.  The omega 6, if you remember is primarily the vegetable oils that we consume far in excess of the omega 3 by a factor of 15 to 30.
Awwww.  Snap.  Nutritionism strikes again.  All polyunsaturates are not the same.  We are belatedly recognizing the fact that highly inflammatory, processed vegetable oils may not be ‘heart healthy’ after all.  More likely they are ‘heart harmful’.  And margarine just changed from trans fats to vegetable oils…..  The advice to change from saturated fat to vegetable oil may not have been good. 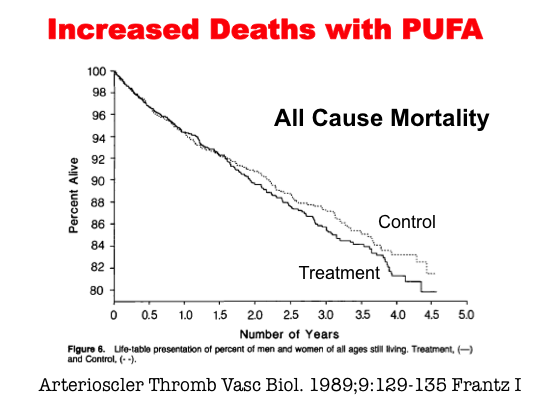 The only long term randomized trial “Test of Effect of Lipid Lowering by Diet on Cardiovascular Risk” by Dr. Frantz, looked at the effect of switching had shown this decades earlier.  The Minnesota Coronary Survey randomized 9,057 inmates at a psychiatric facility to follow a standard diet with 39% fat (18% saturated, 5% polyunsaturated, 16% monounsaturated, 446 mg cholesterol) to a 38% fat diet much lower in saturated fats (9% saturated, 15% polyunsaturated, 14% monounsaturated, 166 mg cholesterol).  This was achieved by changing to egg substitute, margarine and low fat beef – all delicious, artificial foods.  Over a follow up period of 4.5 years, they could not demonstrate any benefit in terms of heart disease.
However, they were able to demonstrate a difference in total mortality.  It was just not the one they were looking for.  The treatment group was dying at a faster rate than the control group eating all the saturated fat.  What?  Eating artificial, man-made, industrially processed substitute food is not good for you?  How can that possibly be?
Continue to A Closer Look at Cortisol – Hormonal Obesity XXXX
Start here with Calories I – How Do We Gain Weight?
See the entire lecture – The Aetiology of Obesity 6/6 – Fat Phobia