Childhood Obesity – The Epiphenomenon of Obesity Part I 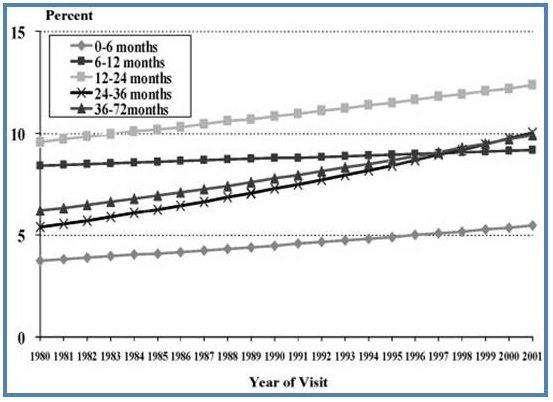 First we will consider the rising tide of childhood obesity.  There is considerable, justified concern that childhood obesity will lead to adult obesity and further health problems.
Obesity is not limited to adolescents, but is now being seen in younger and younger children.  There is an epidemic of obesity amongst 6 month old children.
The paper “Trends in overweight from 1980 through 2001 among pre-school aged children” published in Obesity 2006 takes a close look at the trends.  All age groups show increasing obesity in that 22 year time period including the group of children aged 0-6 months.  This result has been verified by other groups as well.
This observation is very interesting because it lacks an explanation in the current Caloric Reduction as Primary (CRaP) view of obesity (caused by too much eating and too little exercise).
Since a 6 month old eats on demand and is often breast-fed, it is difficult or impossible to consider that they are eating too much.  Since the 6 month old child does not walk, it is impossible to say that this baby is exercising too little.
This had led to numerous hypotheses.  A popular theory seeks to blame obesity on chemicals in our food and our environment.  Bad things like Bisphenol A.  This is certainly a possibility.  However, there are numerous inconsistencies.  Why does this pattern show up in all different parts of the western world despite differing environmental chemicals?  Would we postulate that adult obesity is somehow different from childhood obesity?
The answer is simpler and lies in the Hormonal Obesity Theory.  Hormones are the major driver of weight gain – insulin mostly, but sometimes cortisol.  Insulin drives adult obesity and insulin drives childhood obesity.  Where would an infant get high insulin levels?  From his/her mother.

This paper “The association between pregnancy weight gain and birth weight” was published in The Lancet, 2010.  We see the exact same relationship not only with 6 month old infants, but also newborn babies.  In this paper, Dr. David Ludwig examined the relationship of the weights of 513,501 women and their 1,164,750 offspring. 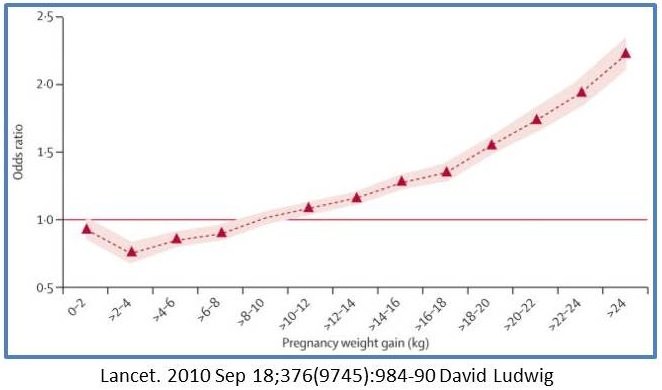 With increasing weight gain in the mother, we see increased weight gain in the newborn.  Because both the mother and the fetus share the same blood supply, any hormonal imbalances are automatically transmitted directly through the placenta to the fetus.
Large for gestational age fetuses (called fetal macrosomia) have a number of risk factors.  Chief amongst them are maternal gestational diabetes, maternal obesity and maternal weight gain.
What do these conditions all have in common?  High maternal levels of insulin!  These are all conditions of too-much-insulin.  This high level of insulin will transmit to the developing fetus and result in a too-large-fetus.
The logical consequence of too-much-insulin in the newborn is the development of insulin resistance.  This is the time dependent effect of obesity.  Higher levels of insulin and insulin resistance leads to higher obesity in the newborn as well as the 6 month old infant.
The bottom line is that we are now passing on our obesity to our children.  As we increase insulin in the mother, it passes to the newborn.  Because we are now marinating these children in insulin starting in the womb, they have much more severe obesity than ever before.
Starting in 1977, the prevalence of childhood obesity has skyrocketed from 5-7% to 15%.  Almost a tripling of childhood obesity in 20 years.  Not surprisingly, we are also starting to see type 2 diabetes and high blood pressure in children.  Previously, this was vanishingly rare.
Recently, there has been a ray of hope, though.  In the most recent survey, obesity was decreased in the age 2-5 group.  I believe that this is a result of a decreased intake of added sugars, as we previously covered in a post.
What has really hampered our ability to combat childhood obesity though, is a simple lack of understanding about the true causes of weight gain (the Aetiology).  This leads to government programs that have no chance of success. 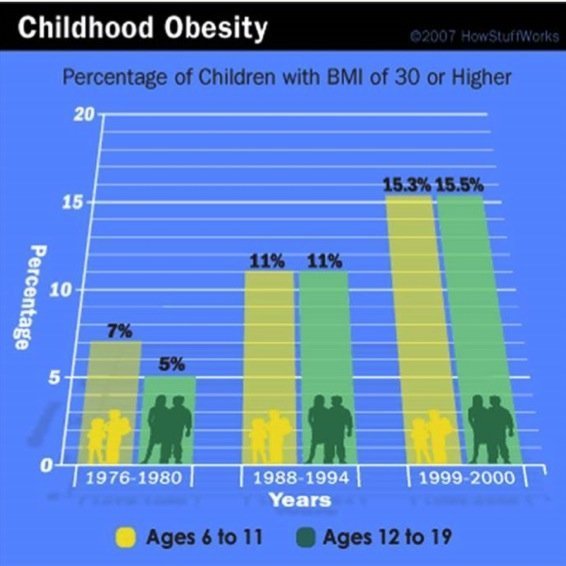 Many still believe that exercise is a vital component of achieving healthy weight, despite the evidence to the contrary.  We explored this idea in Exercise parts 1 – 4.
Due to the this misguided belief, we spend money and effort into promoting children to exercise, or building playgrounds in a failing attempt to curb childhood obesity.
Another favourite policy of the government is to promote ‘nutritious’ food.  The problem here is that the definition of nutritious changes like the weather.  For decades, low-fat was nutritious.  This led to the explosion of highly refined carbohydrate based foods like pasta and bread which may have contributed to obesity.  Sugar, which is low in fat, was thought to be healthier and therefore acceptable.
Many have also recommended eating up to 6 meals a day as ‘healthy’.  As we ate more and more meals in a day, our total intake went up as well.  Obesity rates also increased.  As adult rates of obesity went up, childhood obesity rates also went up.
Somehow, we felt that the same proven-to-be-useless strategies that did not work with adults would somehow work with children.  Somehow we felt that the same blunderous understanding of obesity (Caloric Reduction as Primary) that failed adults would somehow work with children. 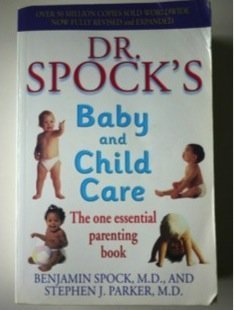 No, obesity is the same in children as it is in adults.  It is driven by hormonal systems – insulin in particular.  Once we understand the hormonal basis of obesity, we can make a start to solving this problem.  Luckily, it has already started.
The most ironic part of this entire sad episode is that we already knew the answer.  In 1946, Dr. Benjamin Spock‘s wrote in his classic bible of child rearing Baby and Child Care “Rich desserts, the amount of plain, starchy foods (cereals, breads, potatoes) taken is what determines … how much (weight) they gain or lose”.
It was never a matter of restricting calories.  It was a matter of reducing insulin.
Continue to Epiphenomenon part II here.
Begin here with Calories I
Click here to see the entire lecture – The Aetiology of Obesity 2/6 – The New Science of Diabesity