The Somogyi effect is also called reactive hyperglycaemia and happens in type 2 diabetic patients. The blood sugar sometimes drops in reaction to the night time dose of medication. This low blood sugar is dangerous, and in response, the body tries to raise it. Since the patient is asleep, he/she does not feel the hypoglycaemic symptoms of shakiness or tremors or confusion.  By the time the patient awakens, the sugar is elevated without a good explanation. The high blood sugar occurs in reaction to the preceding low. This can be diagnosed by checking the blood sugar at 2am or 3am. If it is very low, then this is diagnostic of the Somogy Effect. 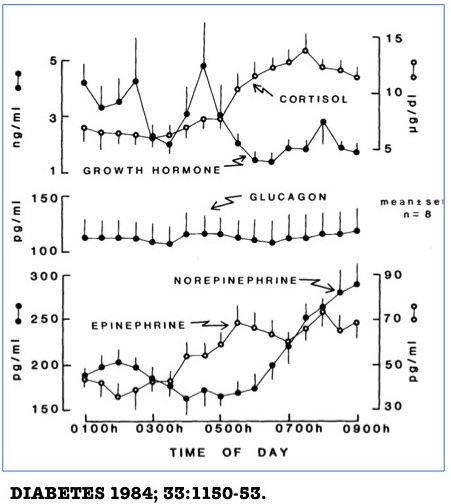 The Dawn Effect, sometimes also called the Dawn Phenomenon (DP) was first described about 30 years ago. It is estimated to occur in up to 75% of T2D patients although severity varies widely. It occurs both in those treated with insulin and those that are not. The circadian rhythm creates this DP.
Just before awakening (around 4am), the body secretes higher levels of Growth Hormone, cortisol, glucagon and adrenalin. Together, these are called the counter-regulatory hormones. That is, they counter the blood sugar lowering effects of insulin, meaning that they raise blood sugars. The nocturnal surge of growth hormone is considered the primary cause of the DP.
These normal circadian hormonal increases prepare our bodies for the day ahead. That is, glucagon tells the liver to start pushing out some glucose. Adrenalin gives our bodies some energy. Growth hormone is involved in repair and new synthesis of protein. Cortisol, the stress hormone increases as a general activator. After all, we are never quite so relaxed as deep sleep. So these hormones gently get us ready to wake up. A good ol’ fashioned hormonal kick in the ass, so to speak. Hormones are secreted in a pulsatile manner peaking in the early morning hours then falling to low levels during the day. 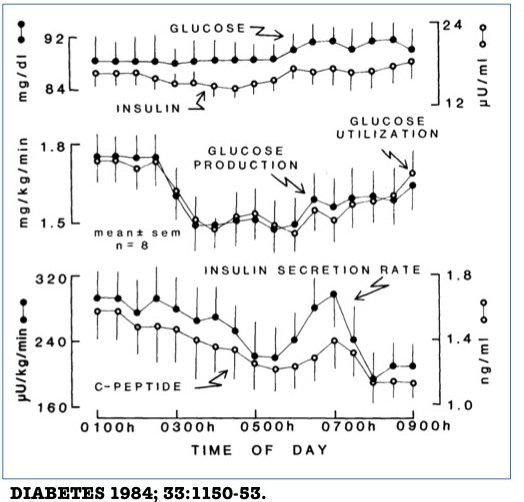 Since these hormones all tend to raise blood sugars, we might expect that our sugars would go through the roof in the early morning. This does not actually happen.
Why? Insulin secretion also increases in the early morning to counteract the counter regulatory hormones. In other words, insulin is there to make sure blood sugars do not go too high. However, if you look closely at the blood sugar readings, there is a slight increase in the morning time.
So, in the normal, non-diabetic situation, blood sugars are not stable throughout 24 hours. The Dawn Effect happens in normal people. This is easily missed because the magnitude of the rise is very small – from 89 to 92 mg/dl. However, this effect was found in every patient studied. So, unless you are specifically looking for the DP, you are likely to miss it.
Think about it this way. Your body has the ability to store food energy as sugar (glycogen) and fat. When you eat, you store food energy. As you sleep (fasting), your body needs to release this stored energy. Around 4am or so, knowing that you will soon be waking up, your body prepares you for the upcoming day. It does this by increasing counter-regulatory hormones to release sugar into the blood. You can see that glucose production falls overnight and starts to ramp up around 4 am. In order to prevent the sugars from rising too much, insulin increases to act as a ‘brake’ on the system. 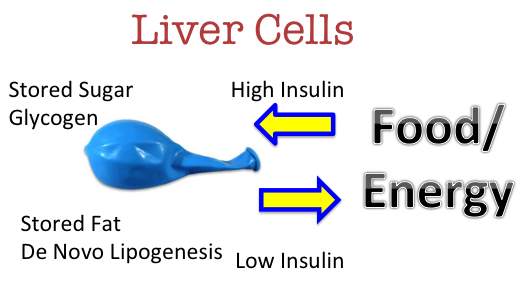 Now, what happens in the situation where you have T2D, or high insulin resistance? First, the technical explanation. Around 4 am, counter regulatory hormones surge and insulin is also released to counter this. However, in T2D, the body has high insulin resistance, meaning that the insulin has minimal effect at lowering the blood sugars. Since the counter regulatory hormones (mostly growth hormone) still are working, blood sugars rise unopposed, and therefore much higher than the normal non diabetic situation. 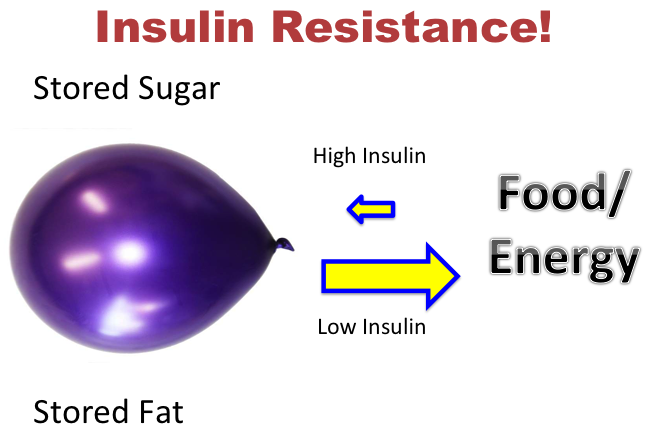 In the non diabetic (normal) situation, the liver is like a balloon. You eat, insulin goes up and food energy is stored as glycogen in the liver. Since the balloon is deflated, the sugar goes in quite easily. As you fast, insulin falls and glycogen is turned back into energy to power the body.
Now, consider the situation of T2D. Over years of overconsumption, our liver is stuffed full of fat and sugar. As we eat, insulin goes up and tries to put more fat into a fatty liver. This is quite difficult. It’s like trying to inflate an overinflated balloon. The sugar and fat simply won’t go in anymore. That’s insulin resistance. 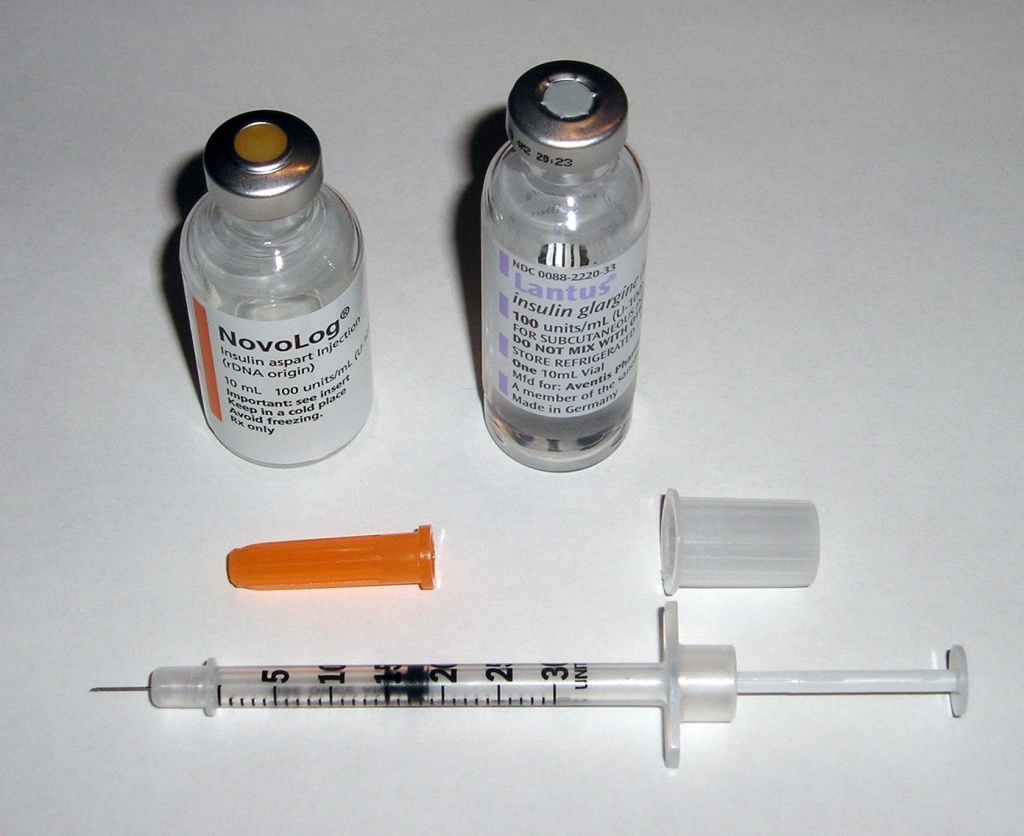 But what happens when insulin starts to fall? You have a huge fatty liver that wants desperately to deflate itself (see last post). As soon insulin falls, sugar comes rushing out of the liver and into the blood. This results in the clinical diagnosis of T2D, when doctors are able to see the high blood sugars. So, what do they do? They prescribe more insulin.
This big whacking dose of injected insulin keeps the sugar bottled up inside the liver. This means that the doctor is able to congratulate him/herself on a job well done. But nothing is actually accomplished. The underlying cause of insulin resistance is the fact that the liver is overstuffed with fat and sugar, like 10 pounds of sausage meat in a 5 pound skin. Nothing has been done to alleviate this situation. So, patients must inject themselves day after day. Over time, they require higher and higher doses. A year later, the liver is like 15 pounds of sausage meat stuffed into a 5 pound skin. 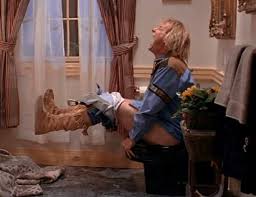 In the Dawn Phenomenon, the body is under orders to release some of the stored sugar into the bloodstream. Like the overinflated balloon, the liver puts forth prodigious amounts of sugar in order to relieve itself of this toxic sugar burden. It’s like trying to hold a fart inside. As soon as we get to the bathroom, it’s ‘Fire in the Hole!’. When our liver gets the ‘go’ signal to release sugar, it does so in huge amounts, overwhelming the pitiful attempts of the insulin to keep it bottled up inside. That’s the Dawn Phenomenon.
The same thing is seen during fasting. Remember, there are hormonal changes during fasting that include increases in growth hormone, adrenalin, glucagon and cortisol. These are exactly the same counter-regulatory hormones as seen in the DP. These are normal changes. As you fast, your insulin drops. Your body then tries to increase the glucose in the blood by encouraging the liver to release some of its stored sugar and fat. This is natural. However when you have T2D, there is too much sugar released from the liver which shows up in the blood like an uninvited guest. 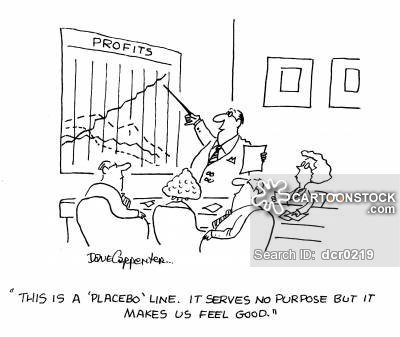 Is this a bad thing? No, not at all. We are merely moving the sugar from the liver out into the blood. Lots of doctors consider it bad, because they are only concerned about the sugar that they see (in the blood). They do not concern themselves with the sugar that is hidden away.
After all, think about it this way. If you are not eating, where is the sugar coming? It must come from inside your own body. There is no other alternative. You are simply moving the sugar from storage, out into the blood where you can see it. It is neither good nor bad.
Insulin moves the sugar from the blood where they see it, and into the tissues (liver) where they cannot. It is no less bad, but they are able to pat themselves on the back for a job ‘well done’. it is not different from moving garbage from the kitchen underneath your bed. It smells the same, but you can’t see it.
I call drugs like these (insulin, sulfonlyureas) dracebos – placebos for doctors. They are medication that don’t actually help the patient in any way, but make the doctors feel better about themselves. You will still die of diabetic complications, but hey, at least the doctor has saved his/her own ego pretending that he/she did something about it. The history of medicine is the history of the placebo (and dracebo) effect.
In the IDM program, we typically use medications to keep blood sugars in a reasonable, but not low range during fasting. Insulin keeps all the sugar bottled up inside the body. If we stop insulin, there is a risk that it comes out much too quickly (like the overinflated ballon releasing all at once). So we want to use less insulin, but enough to release the stored sugars at a reasonable measured pace. A physician needs to adjust the medications to properly control the flow of sugar out of the liver.
The Dawn Phenomenon, or higher blood sugars during fasting does not mean you are doing anything wrong. It’s a normal occurrence. It just means that you have more work to do.
Some people have normal blood sugars except for the Dawn Phenomenon. This still indicates that there is too much sugar stuffed into their liver. They need to keep burning down that sugar. It means there is much more work to be done before they are cleared of their diabetes.
Think about it this way. The Dawn Phenomenon is simply moving sugar from body stores (liver) into the blood. That’s it. If your body stores are filled to bursting, then you will expel as much of that sugar as possible. By itself it is neither good nor bad. It is simply a marker that your body has too much sugar. Solution? Simple. Either don’t put any sugar in (LCHF) or burn it off (Fasting). Even better? LCHF + IF.