The term diabesity is the unification of the words ‘diabetes’, referring to type 2, and ‘obesity’. It is a wonderful word because it is at once able to convey that they are truly one and the same disease. It is incredibly descriptive and evocative in the same way as the word ‘bromance’. 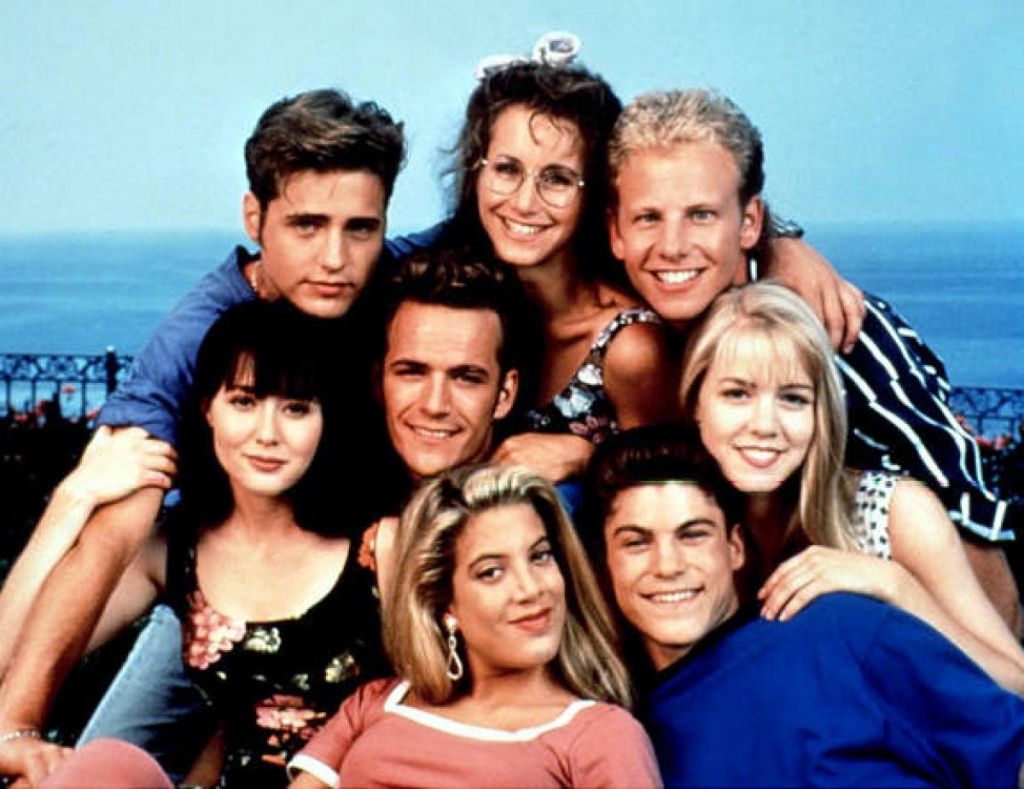 Strange as it may now sound, physicians did not always recognize this seemingly obvious and basic connection between type 2 diabetes and obesity. Let’s go back in time to the year 1990. Grunge was taking over the music scene. Fanny packs were growing in popularity (gasp!) and not the sole domain of the middle-aged dad tourist. The mid 20’s actors of the hit TV show Beverly Hills 90210, pretending to be high school students, were totally fly not just sad replicas of cool.
The obesity epidemic had only just gotten underway in the late 1970s and was not the public health disaster it is today. Type 2 diabetes barely scratched the surface as a public health concern. AIDS was the hot topic of the day. And type 2 diabetes and obesity were not considered diseases that were related in any way. Indeed, the 1990 Report of the Dietary Guidelines Advisory Committee issued by the US Department of Agriculture allowed that some weight gain after the age of 35 is consistent with good health.
Walter Willett, now Professor of Nutrition at Harvard’s School of Public Heath was one of the first researchers to identify the strong and consistent relationship between weight gain and type 2 diabetes. But it was certainly not an easy sell to a skeptical medical profession. “We had a hard time getting the first paper published showing that even slight overweight greatly increased the risk of diabetes,” Willett said. “They didn’t believe it.”
In 1990, Dr. Willett and colleagues reported that weight gain after age 18 was the major determinant of type 2 diabetes. A weight gain of 20-35 kg (44-77 pounds) increased the risk of type 2 diabetes 11,300%. More than 35 kg (77 pounds) weight gain increased the risk by 17,300%! Even smaller amounts of weight gain could raise the risk significantly.
The Body Mass Index (BMI) is a standardized measurement of weight. It is calculated by the following formula:

A BMI less than 18.5 is considered underweight. BMI 18.6 – 24.9 is considered normal weight, and BMI over 25 is considered overweight. Women with a BMI of 23-23.9 compared to less than 22 have a 360% higher risk of type 2 diabetes. This is all the more stunning, since that BMI is well within the normal range. 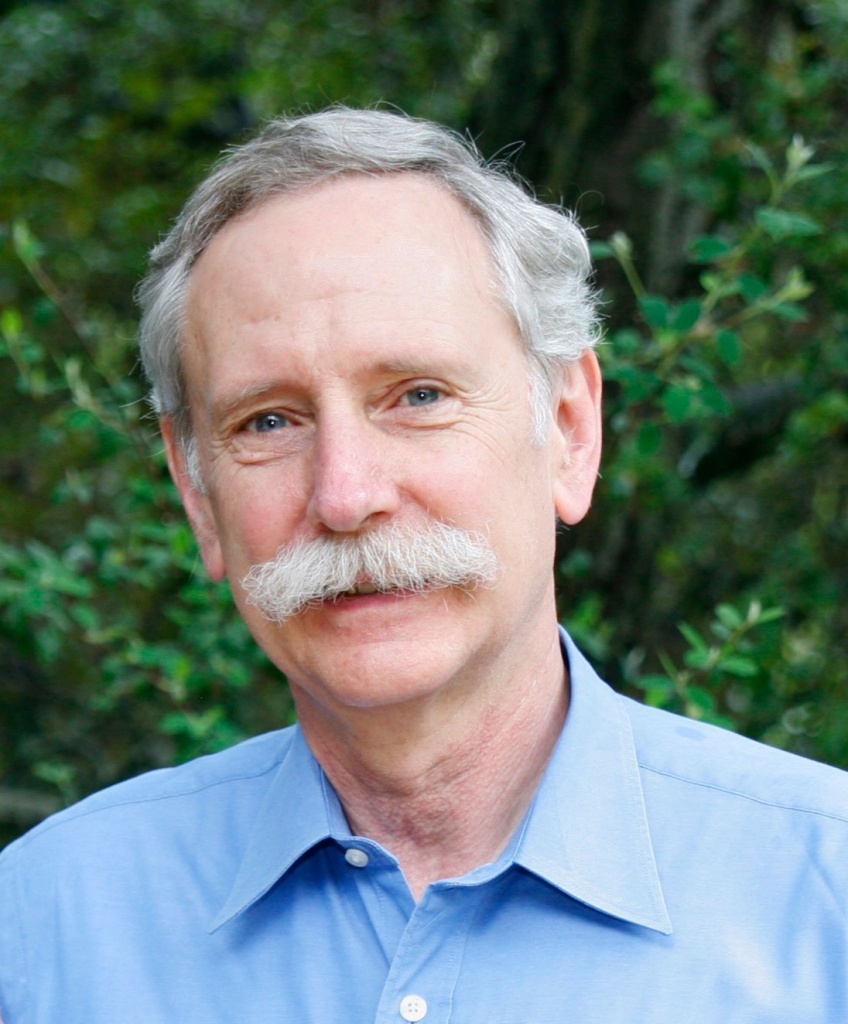 By 1995, these insights were extended and refined. Weight gain of only 5.0-7.9 kg (11-17.5 pounds) increased the risk of type 2 diabetes by 90%, and weight gain of 8.0-10.9 kg (17.5 – 24 pounds) increased the risk by 270%. By contrast, weight loss decreased risk by over 50%. This established the uniquely intricate relationship between weight gain and type 2 diabetes. But far more sinister, this excess weight also increased the risk of death.
Dr. Frank Speizer established the original Nurses’ Health Study (NHS) in 1976 as one of the largest investigations into risk factors for cardiovascular disease and cancer. This was a large-scale, long-term epidemiological study of 121,700 female nurses from around the Boston area.
Dr. Willett continued with the Nurses’ Health Study II, which collected yearly data on an additional 116,000 female nurses since 1989. At the start all were relatively healthy, but over time, many developed chronic diseases such as diabetes and heart disease. By looking back at the collected data, some idea of the risk factors for these diseases emerged.
By 2001, Dr. Willett and his long-time Harvard collaborator Dr. F. Hu showed that, once again, the single most important risk factor for the development of type 2 diabetes was obesity. But other lifestyle variables were also important. By incorporating simple lifestyle measures that included maintaining a normal weight, regular physical exercise, no smoking and a ‘healthy’ diet could prevent a stunning 91% of type 2 diabetes. The ‘healthy’ diet here was defined as a diet high in cereal fiber, high in polyunsaturated fats, low in trans-fat and low in glycemic load.
Glycemic load is a measure of how high blood glucose rises after eating certain foods. It is calculated by multiplying the glycemic index with the grams of carbohydrate in a standard serving of food. Generally, foods high in sugar and refined carbohydrates are high in glycemic load. Dietary fats, since they raise blood glucose minimally, have very low glycemic loads. This ‘healthy diet’ was not the low-fat diet recommended by all the medical associations around the world at the time. Indeed, one of the components of this ‘healthy’ diet was more fats of the right kind. This diet was about reducing sugar and refined carbohydrates, not fat. 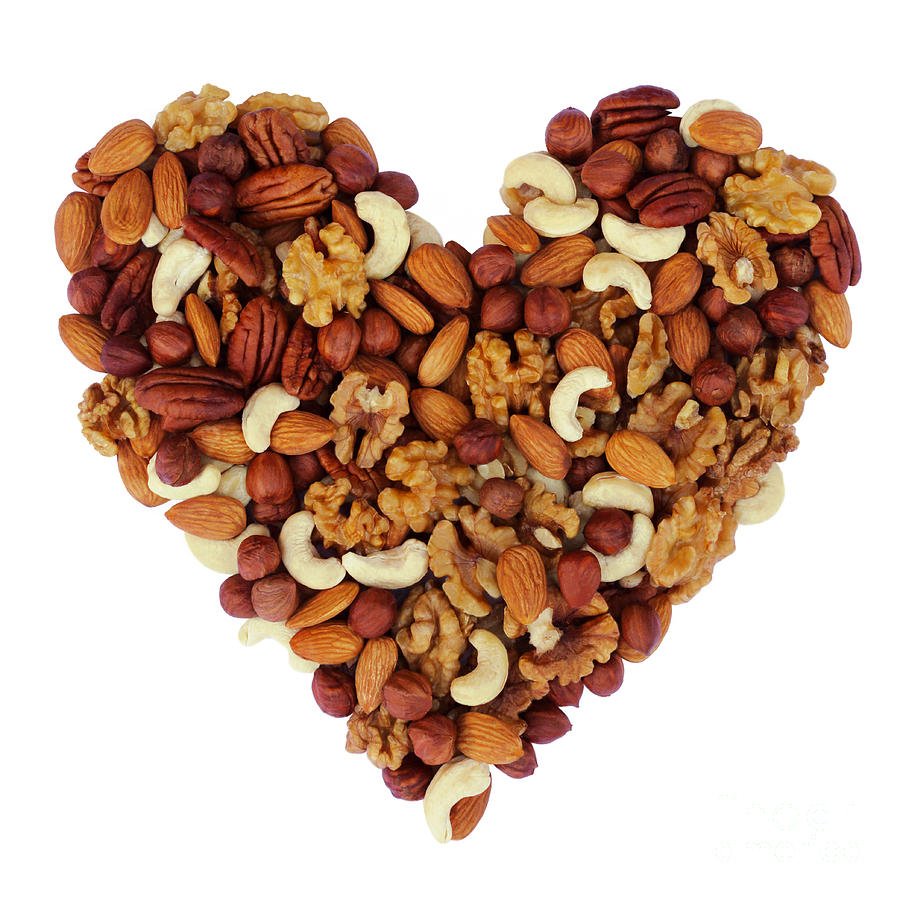 But it was difficult to sway a skeptical 1990 medical establishment about this critical distinction. We were in the middle of a frenzied low-fat obsession. Dietary fat was evil. Dietary fat was a mass murderer. Dietary fat was vile. The term healthy fats did not exist. It was an oxymoron, like a jumbo shrimp. Fat laden avocados? A heart attack in a fruit. Fat laden nuts? A heart attack in a snack. Olive oil? Liquid heart attacks.
Fats were going to clog our arteries, weren’t they? Most people believed that the evidence was conclusive. But it was only an illusion. Dr. Zoë Harcombe reviewed all the data available at the time the low fat guidelines in the United States and United Kingdom were introduced in the early 1980s. No proof had ever existed that dietary fat worsened cardiovascular disease. The ‘evidence’ for the low fat guidelines was simply a great work of fiction.
In the midst of the low-fat maelstrom, suggesting that refined grains and sugars were the problem rather than dietary fat was simply heretical. Coming from the very heart of the medical establishment, this was high treason from a favored professor prince of Harvard. But the truth could not be concealed forever.

In 2001, Dr. Hu writes, “The public generally does not recognize the connection between overweight or obesity and diabetes. Thus, greater efforts at education are needed”. At least this much has been accomplished. The general public understands clearly that obesity is the main underlying issue behind type 2 diabetes. But the problem wasn’t simply obesity. Rather, it was abdominal obesity.

In 2012, Dr. Michael Mosley was a TOFI. A what? Not tofu, the delicious Asian soy delicacy. TOFI stands for Thin on the Outside, Fat on the Inside. Dr. Mosley is a medical doctor, BBC journalist, documentary maker, and international best-selling author. And, in his mid-50s, he was also a ticking time bomb. 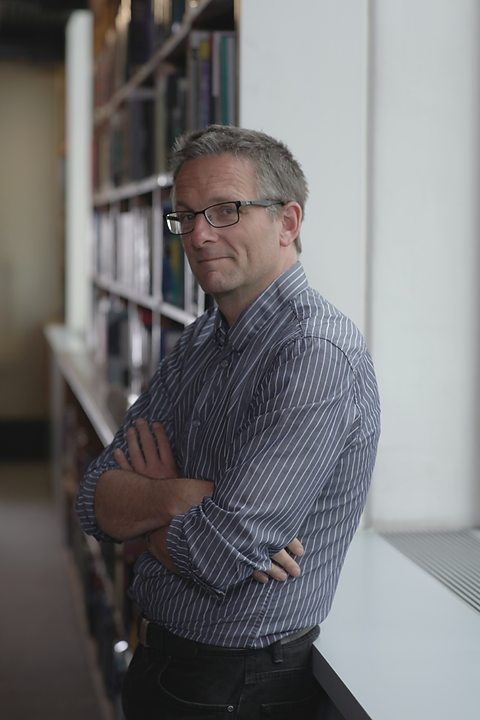 He was not particularly overweight, weighing 187 pounds, standing 5 feet 11 inches with a waist of 36 inches. This gives a body mass index (BMI) of 26.1, just barely in the overweight range. By most standard measurements, he was considered just fine. He felt just fine, with perhaps just a little bit of weight carried around the mid-section from being ‘middle-aged’.
However, BMI is not the best indicator of type 2 diabetes risk. The waist circumference, a measure of body fat distribution around the trunk is a far better predictor of type 2 diabetes. Filming a health show for the BBC, Mosley had a magnetic resonance imaging (MRI) body scan. To his shock and consternation, his organs were literally swimming in fat. To look at him, you would not have guessed it because most of it was hidden inside his abdomen.
Eighteen months later, during a visit to his GP, routine screening blood tests revealed type 2 diabetes. Devastated, Dr. Mosley says, “I had assumed I was healthy and suddenly I was discovering I wasn’t, and had to take this visceral fat situation seriously.” Visceral fat accumulates around the intra-abdominal organs such as the liver, kidneys and intestines, and can be detected by an increased waist size, or an increased waist/hip ratio. This pattern of obesity where most of the fat is carried around the abdomen is called central obesity or central adiposity. In contrast, subcutaneous fat is the fat deposit directly under the skin.
The different fat distribution explains how roughly 30% of obese adults are metabolically normal. These ‘healthy fat’ people carry more subcutaneous fat, not the more dangerous visceral fat. On the other hand, some normal weight persons show the same metabolic abnormalities as that in obesity, because of excessive visceral fat. 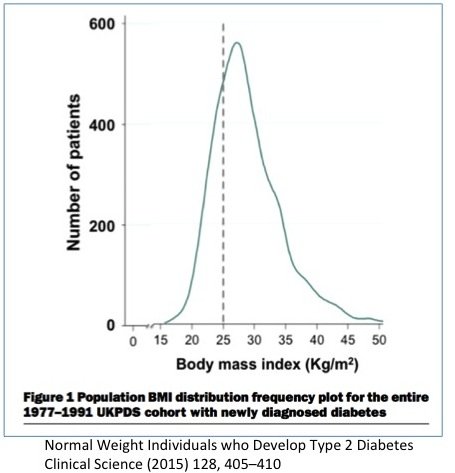 Type 2 diabetes is diagnosed at all BMI following a normal distribution with no distinct subpopulation of ‘thin’ diabetics. A full 36% of newly diagnosed diabetics have a normal BMI <25. The core clinical component is not total fat, but visceral or intra-organic fat.
Sophisticated measurements of insulin resistance, such as the Homeostasis Model Assessment of Insulin Resistance (HOMA-IR) correlate better to the waist-to-hip ratio and waist circumference rather than the BMI. Independent of total weight, central obesity is highly correlated to metabolic abnormalities, increased cardiac risk and progression to type 2 diabetes, even independently of total weight. Reducing visceral fat in the Diabetes Prevention Program also successfully reduced the risk of progression of type 2 diabetes. 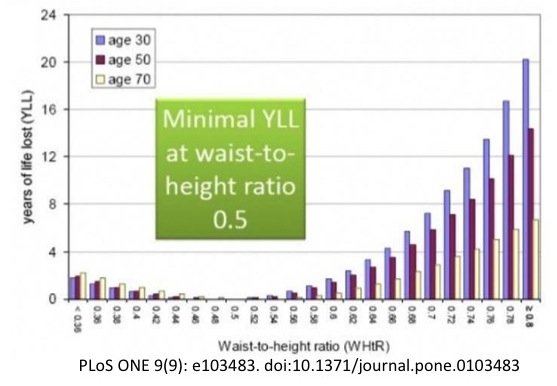 Subcutaneous fat, on the other hand, shows little correlation to insulin resistance, type 2 diabetes or heart disease. Even more telling, the surgical removal, via liposuction of almost 10 kg of subcutaneous fat brought no significant metabolic benefits whatsoever.
The waist to height ratio (WHR) is a simple measure of central adiposity calculated by comparing waist circumference to height. This WHR is far more predictive of years of life lost than BMI. Optimally, your waist circumference should be less than half your height. For example, an average man standing five foot ten inches (70 inches) should strive to maintain a waist size of thirty-five inches or less. As central obesity increases, years of life lost skyrockets.
There is a distinction even between types of visceral fat. Fat found inside the organs, such as that within the liver and pancreas is distinctly more dangerous than fat found around the organs, called the omental fat. Intra-organic fat increases the risk for the metabolic complications of obesity, including type 2 diabetes, NASH, and cardiovascular disease. On the other hand, surgical removal of omental fat does not result in any metabolic improvement.
Fat within the liver, called intrahepatic fat, plays a crucial role in the development of insulin resistance. Central obesity tracks very closely with intrahepatic fat content. Fat within the pancreas also plays a leading role in type 2 diabetes.
So, what drives fat deposition into the organs? The master hormone insulin plays the starring role.