Insulin, first discovered in 1921, revolutionized the treatment of type 1 diabetes. Dr. Banting licensed insulin to pharmaceutical companies without a patent because he believed that this life saving drug for T1D should be made available to everybody who needed it. So, why is insulin so hard to afford today?
Only three pharmaceutical companies manufacture insulin in the United States – Eli Lilly, Sanofi and Novo Nordisk. In 2012, it is estimated that insulin alone cost the US health care system $6 billion. How can they make so much money from a century old product? In 2013, according to firecepharma.com, the best selling drug for diabetes was…. Lantus, a long acting form of insulin. So, after all the research of the past 95 years, the biggest money-makin’, mama-shakin’ drug was insulin? Yes, sir. Worldwide, this drug alone made $7.592 billion. That’s billion with a B. Oh, but the news gets better for Big Insulin. Out of the top ten, various insulins also ranked #3, 4, 6,7,9, and 10. Holy patent extensions Batman! A full seven of the top ten drugs for diabetes are insulin – a drug close to a century old. It’s like your 95 year old grandfather beating LeBron James at basketball. 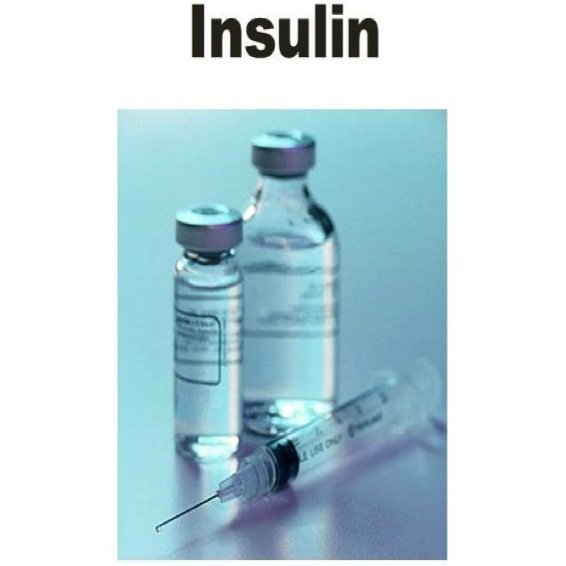 Tweaking the insulin molecule allows additional patents and cheaper generic medications can be kept at bay. That this clearly violates Dr. Banting’s original intention doesn’t matter. There is no clear evidence that these newer insulins are any more effective than the old standards. While there are some theoretical benefits, the outcomes in T2D have only worsened even as these newer insulins became more widely prescribed. Hiking prices is another lucrative technique. From 2010 to 2015, the price of newer insulins rose from 168- 325%. Without generic competition, there is clearly collusion between the companies to keep prices high. After all, shareholders must be kept happy and the CEO needs a private jet.
At the time of insulin’s discovery, T2D, while still relatively rare, had few treatments available. Metformin, the most powerful of the biguanide class of medications, was discovered shortly after insulin and described in the scientific literature in 1922. By 1929, its sugar lowering effect was noted in animal studies, but it was not until 1957 that it was first used in humans for the treatment of diabetes.
It entered the British National Formulary in 1958, and entered Canada in 1972. It was not FDA approved in the United States until 1994 due to concerns about lactic acidosis. It is now the most widely prescribed diabetes drug in the world.
The sulphonylurea drug class was discovered in 1942 were introduced in 1956 in Germany. By 1984, more powerful second generation SUs were introduced in the United States. These drugs stimulated the pancreas to release more insulin, which reduced blood sugars. There were many side effects, including severe hypoglycemia, but they did prove effective at lowering blood sugars. For decades, these two drug classes were the only oral medications available for the treatment of T2D.
Even while the number of blood pressure and cholesterol medications were exploding, the oral hypoglycaemic drug class was mired in a rut. There was simply no money to be made for drug companies. The numbers of patients were too small, and the benefits of these drugs were dubious. But things were soon to change. 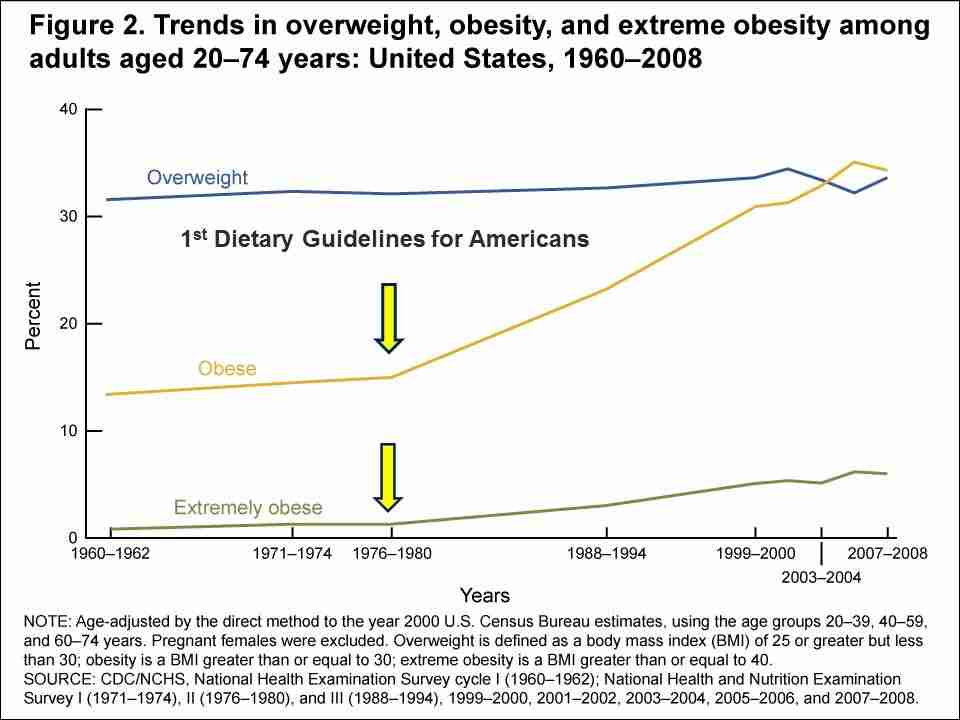 In 1977, the Dietary Guidelines for Americans were introduced to an unsuspecting American public and dietary fat was public enemy #1. The subsequent high carbohydrate intake would have unintended consequences and the obesity epidemic soon bloomed. Following like a love-sick puppy was the epidemic of T2D.
In 1997, the American Diabetes Association lowered the blood sugar definition of type 2 diabetes, instantly rendering as many as 1.9 million more Americans as diabetic.
Pre-diabetes underwent a similar change in definition in 2003. This would label 25 million more Americans as pre-diabetic. With growing numbers, the business case for the development of diabetic medications changed completely. While there is broad consensus that pre-diabetes is best treated with lifestyle changes, advocacy groups soon embraced the notion of drug therapy. The guidelines have been lowered so much that, by 2012, the prevalence of diabetes in American adults was 14.3% and prediabetes 38%, adding up to 52.3% of americans being either pre-diabetic or diabetic. This was now the new normal. It was more common to have pre-diabetes or diabetes than it was to have normal blood sugars. Diabetes is the new black.
By 1999, the diabetes economy was primed to boom. In 1999, rosiglitazone and pioglitazone were approved by the FDA for the treatment of T2D. They have subsequently fallen into disuse due to concerns about provoking heart disease and bladder cancer. But it hardly mattered. The dam had burst. From 2004- 2013, no less than thirty new diabetes drugs were brought to market.
By 2015 sales of diabetes drugs had reached $23 billion, more than the combined revenue of the National Football League, Major League Baseball, and the National Basketball Association. This was big time business.
While these drugs all lowered blood sugars, clinically important outcomes, such as reducing heart attacks or strokes, blindness, or other complications of the disease, were not improved. The entire diabetes industry revolved around reducing high blood sugars instead of actually helping patients. The disease was one of increased insulin resistance, yet treatments were based upon lowering blood sugars instead. We were treating symptoms, instead of the actual disease.

In 2003 the American Diabetes Association changed the definition of pre-diabetes adding an additional 46 million adults to its ranks. In 2010, the definition was further broadened by the use of the Hgb A1C. Ostensibly to help with early diagnosis and treatment, it is perhaps no coincidence that 9 of 14 outside experts on this panel worked in various capacities with the giant pharmaceutical companies that made diabetes medications and stood to reap an unending stream of money.
While individual members were paid millions of dollars, the association itself reaped more than $7 million in 2004 from its pharmaceutical ‘partners’. By 2012, more than 50% of the American population would be considered either diabetic or pre-diabetic. Mission accomplished. Cha ching. The market for drug consumption had been created.
The conflicts of interest only get worse. In 2008, a joint statement released by the American College of Endocrinology and the American Association of Clinical Endocrinologists released a joint statement about pre-diabetes encouraging physicians to consider drug treatment of high-risk patients despite the fact that no drug had been yet approved by the FDA.
Were these unbiased academics giving their honest opinions? Hardly. 13 of the 17 members on that panel were paid as speakers and consultants to diabetes drug companies.
By 2013, these ‘advocacy’ groups recommended drug treatment of pre-diabetes even more forcefully if lifestyle changes didn’t work. Altruistic? Hardly. That year, more than $8 million of Big Pharma’s money helped shape their positive opinion. 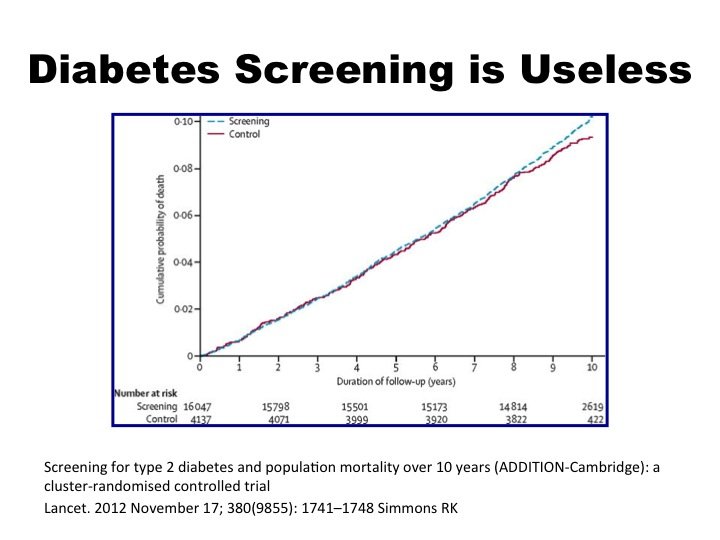 Thirteen of the 19 doctors on the panel that made the recommendation, including its chairman, were paid as consultants, speakers, or advisers to pharmaceutical companies that, surprise, surprise made diabetes drugs. Payments totaled $2.1 million since 2009. While patients could no longer afford their insulin shots, there was plenty of cash for the diabetes associations. Fancy dinners? Check. Fancy trips? Check. Large cheque? Check.
The story would be completely different if these drugs actually helped patients in a meaningful way. In prediabetes, none of the current drugs are approved for use. The reason we don’t use them is because they are useless.
Diabetes screening has already been shown to be largely useless with the current crop of medications. We can all agree that T2D is a disease of high insulin resistance but the current crop of medications only treats high blood sugars.
T2D, at its very core, is a disease about too much sugar in the body, not just the blood. Yet most of our drugs, from metformin to insulin do not rid the body of that sugar. It only drives it from the blood and into the body. But if this sugar is toxic in the blood, why would it not be toxic inside the body?
We are only moving the sugar from somewhere we can see it (the blood) to somewhere we cannot (the body) and then pretending things are improved, but all the while knowing that we have not made a difference. Where lifestyle changes clearly improves health, drugs just as clearly do not.
Screening only leads to better outcomes if there is rational treatment. Since our treatment of pre-diabetes consists of ineffective drugs, early diagnosis is futile. But this inconvenient fact hardly matters to the big pharmaceuticals and their minions. As long as they controlled the diabetes associations, there was cash to be made.
This largely explains the reluctance of the world’s Diabetes Associations and endocrinologists to acknowledge the devastating truth – that insulin just doesn’t help patients over the long term. With so much cash on the table, who do you think funds all the research in the universities, pays for all the private school tuition, sponsors all the ‘diabetes’ events? Big Insulin. But the pied piper must be paid. The currency of repayment is blindness, organ failure, amputations, and death.