Polycystic ovarian syndrome (PCOS) has only been considered a disease in the last century, but it is actually an ancient disorder. Originally described as a gynecological curiosity, it has evolved into the most common endocrine disorder of young women, involving multiple organ systems. In ancient Greece, the father of modern medicine, Hippocrates (460BC-377BC), described “women whose menstruation is less than three days or is meagre, are robust, with a healthy complexion and a masculine appearance; yet they are not concerned about bearing children nor do they become pregnant”. This description of PCOS existed not only in ancient Greece, but is found in ancient medical texts throughout the world.
Soranus of Ephesus (c. 98-138 AD), near modern day Turkey, observed “that the majority of those (women) not menstruating are rather robust, like mannish and sterile women”. The renaissance French barber surgeon and obstetrician Ambroise Paré (1510-1590 AD) noted that many infertile women with irregular menses are “stout, or manly women; therefore their voice is loud and bigge, like unto a mans, and they become bearded”. It’s quite an accurate description from a doctor who can apparently cut your hair, cut your leg off, or deliver children. The Italian scientist Antonio Vallisneri connected these masculinizing features with the abnormal shape of the ovaries into a single disease. He described several young, married infertile peasant women whose ovaries were shiny with a white surface and the size of pigeon eggs
In 1921, Achard and Thiers described a syndrome whose main features included masculinizing features (acne, balding or receding hairline, excessive facial hair) and type 2 diabetes. Further cases in 1928 cemented the link between what is now called PCOS with type 2 diabetes and described in the classic article ‘Diabetes of Bearded Women’.
Careful observation had already revealed to these astute clinicians a syndrome whose main features included menstrual irregularities (now known to be anovulatory cycles), infertility, masculine features (hair growth), and stoutness (obesity) with its related type 2 diabetes. The only essential feature they missed from the modern definition of PCOS was the multiple cysts on the ovary, because of the lack of simple non-invasive imaging.
The Modern Era 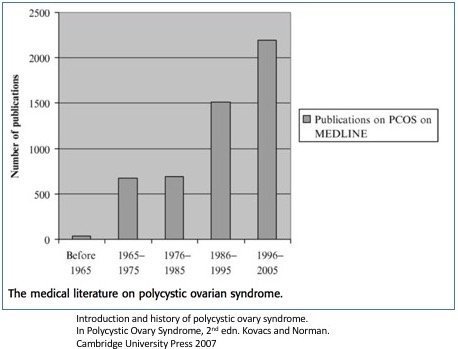 Drs. Stein and Leventhal ushered in the modern era of PCOS in 1935 with their description of 7 women with all the current diagnostic features – masculinizing features, irregular menses and polycystic ovaries. The breakthrough occurred by making the connection between the lack of menstruation with the presence of enlarged ovaries and merging them into a single syndrome – PCOS. At that time, the detection of enlarged cystic ovaries was difficult and Stein and Leventhal achieved this either by direct surgical observation (laparotomy) or using a now-defunct x-ray technique called pneumoroentgenography. This procedure involved making an abdominal incision to introduce air and then taking x-rays. The shadow of the enlarged ovary could now be seen. However, in an era prior to effective antibiotics, this was a risky procedure.
Dr. Stein hypothesized that some as yet undetermined hormonal imbalance caused the ovaries to become cystic and he suggested that surgically removing a wedge of the ovary may help reverse the syndrome. And indeed, this crude surgery worked. All seven women began to menstruate again and two even got pregnant. With its main features defined, interest in PCOS surged as reflected by the large increase in PCOS articles in the medical literature.
Subsequently, Drs. Stein and Leventhal performed ovarian wedge resection on another 75 women with restoration of menstrual cycles in 90% of cases and restored fertility in 65%. Defining the syndrome and delineating a reasonable treatment was such an accomplishment that this disease became known as the Stein-Leventhal Syndrome. With the advent of modern medical solutions, particularly the medication clomiphene citrate, the ovarian wedge resection today is rarely done.
Through the 1960s and 1970s, improved radioimmunoassay techniques allowed for easier detection of the typical hormonal abnormalities of PCOS. The masculine appearance was caused largely by excessive male sex hormones called androgens, of which testosterone is the best known. The biochemical diagnosis of PCOS is problematic because androgen levels are only modestly elevated and unreliable due to their variation throughout the day and throughout the menstrual cycle. However, the effect of excessive androgens is obvious in the masculinizing features of these women (acne, male pattern baldness, facial hair growth), but measuring these androgens is not as useful for the diagnosis of PCOS as you may have thought. 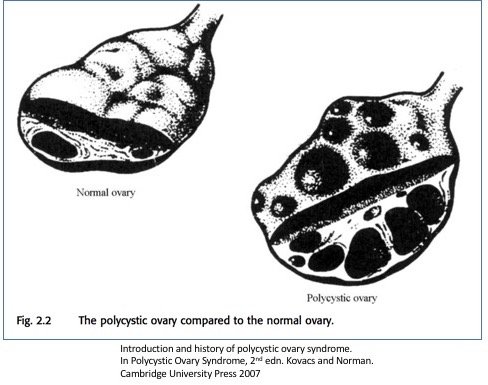 By the 1980s, the increasing availability of real-time ultrasound revolutionized the diagnosis of PCOS. Laparotomy was no longer necessary to confirm the enlargement of the ovaries. In 1981, Swanson standardized the definition of polycystic ovaries on ultrasound allowing researchers to easily compare cases. Further refinements included the introduction of trans-vaginal ultrasound which is far superior for detection of ovarian cysts. This technology soon made clear that many otherwise normal women also had multiple cysts on their ovaries. Almost ¼ of the population had polycystic ovaries without any other symptoms. Thus, it is important to distinguish between the mere presence of polycystic ovaries, and polycystic ovary syndrome (PCOS).
The 1980s also saw a revolution in our understanding of the underlying cause of PCOS. The disease had originally been thought to be caused by excessive exposure of female fetuses to androgens, but this hypothesis was ultimately refuted. Instead, studies increasingly linked PCOS with insulin resistance and hyperinsulinemia. The prefix ‘hyper’ means ‘too much’, and the suffix ‘-emia’ means ‘in the blood’, so the word ‘hyperinsulinemia’ literally means ‘too much insulin in the blood’.
The syndrome was still known by a multitude of different names – polycystic ovaries disorder, a syndrome of polycystic ovaries, functional ovary androgenism, hyperandrogenic, chronic anovulation, polycystic ovarian syndrome, ovarian dysmetabolic syndrome, sclerotic polycystic ovary syndrome and so forth. This significantly hampered scientific progress as researchers did not always know whether they were talking about the same disease.
Standardization of the terms was necessary to move forward in proper identification and diagnosis. The first step was taken at the 1990 National Institutes of Child Health and Human Development (NICHD) Conference on PCOS. At that conference, the consensus criteria included specifically:

Because these symptoms are not specific to PCOS, other diseases would need to be ruled out. This so-called NIH criteria was a giant leap forward. Proper classification allowed international collaboration between universities and researchers. Interestingly, the NIH criteria does not require evidence of polycystic ovaries, obviously a problem for a disease known as polycystic ovary syndrome. 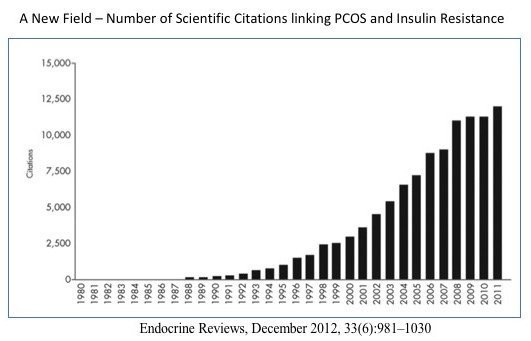 In 2003, the second international conference on PCOS was held in Rotterdam, the Netherlands. Two innovative features were added to the consensus criteria becoming now known as the Rotterdam criteria. First, it corrected the seemingly obvious oversight of mentioning that Polycystic Ovary Syndrome patients actually might have polycystic ovaries. It took a mere 14 years to correct that little oversight.
Secondly, PCOS was recognized to represent a spectrum of disease and that not all symptoms may appear in all patients. Thus, only two of three criteria were needed to classify patients as PCOS. This includes:

In 2006, a further refinement to the criteria was made by the Androgen Excess Society (AES) who recommended that hyperandrogenism be considered the clinical and biochemical hallmark of PCOS. This would be the sine qua nonof PCOS. Without evidence of hyperandrogenism, you simply cannot make the diagnosis. This refinement focused researchers and doctors on the underlying causeof disease, rather than merely the presence or absence of polycystic ovaries. The Rotterdam criteria considered all three of the main elements equal. 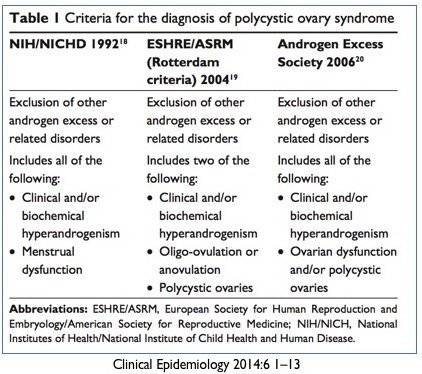 The NIH criteria, being somewhat older, are rarely used today. In 2012, an NIH Expert Panel recommended that the Rotterdam criteria be used for diagnosis. The AES 2006 recommendations are commonly used as well, being fairly similar to the Rotterdam criteria.
It is important to note here that although obesity, insulin resistance and type 2 diabetes are commonly found in association with PCOS, they are not part of the diagnostic criteria.