With the publication of Dr. Key’s Seven Country Study, the origins of the Diet-Heart Hypothesis were laid down.  The major problem was that this was all observational data, and as such, was subject to severe interpretation.  There is nothing more dangerous in medicine than the correlation study.  It cannot be used to prove a hypothesis, only to disprove one.

For example, looking at the same data as Dr. Keys, others came to completely different conclusions.  While saturated fat was correlated to heart disease, most of it was the influence of animal fats.  Vegetable fats were not correlated at all.  But it wasn’t merely animal fats, but also animal protein that had correlation to heart disease.  So maybe it was animal products – ie. red meat dilemma.  Keep in mind that this does not exonerate vegetable fats.  Most people were eating nut oils and olive oil, not the highly processed corn oil, canola and vegetable oils that would come to dominate the American supermarket shelves.
However, it is also possible that animal consumption was merely a marker for industrialization.  Counties with higher levels of industrialization tended to eat more animal products – meat and dairy.  So, are you saying that the more Westernized countries had more Western diseases?  Hmm…  Seems kind of obvious, that.  I rather favour that as the likely explanation.
There are actually multiple hypotheses that could have come out of the Seven Countries Study.  Maybe the culprit was indeed saturated fat.  Maybe it was animal fat.  Maybe it was animal protein.  Maybe it was industrialization and processed foods.  Maybe it was total protein.  Maybe it was carbohydrate.  All of these hypotheses could have been generated from the same study.  But what we got was the Diet-Heart Hypothesis.
To some extent, this has persisted to this date.  Most people still believe in the Diet-Heart Hypothesis as laid out originally in 1970.  The Lipid hypothesis refers to the hypothesis that serum cholesterol causes heart disease.  The Diet-Heart hypothesis refers to the hypothesis that dietary saturated fat raises cholesterol and therefore raises heart disease.  There are actually problems with all parts of this hypothesis. 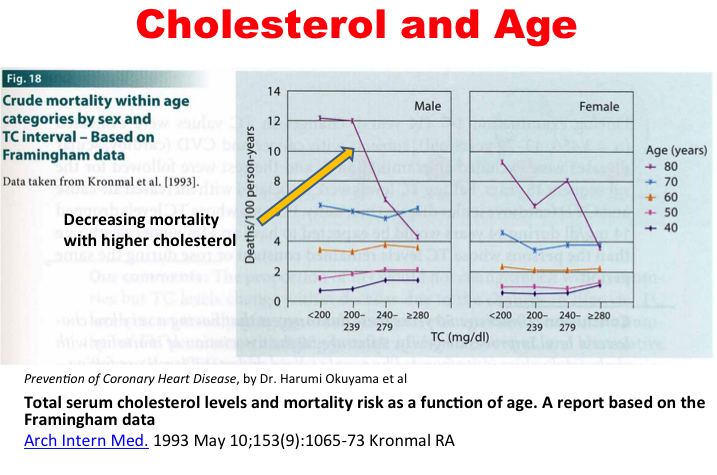 The first problem faced was the fact that total serum cholesterol turned out not to be correlated to heart disease at all.
There was very weak correlation with death and total cholesterol.  In fact, in the oldest age groups, high cholesterol was strongly protective.  This was shown in multiple other studies.  Total cholesterol was not very good at all.  This problem was solved by looking at the ‘good’ cholesterol HDL versus the ‘bad’ cholesterol LDL.  This seemed to fix things up a bit better.
If anything, there was a stronger correlation between low HDL and heart disease than LDL.  The dietary manipulations tended to move both HDL and LDL up or down rather than individually.  Drugs, such as torcetrapib were developed at massive expense to raise HDL levels.  Unfortunately, these drugs all killed people and were abandoned.  Pfizer spend close to $1 billion dollars to develop this drug all based on the same faulty correlation data.  Soon afterwards, thousands of people were laid off.  Low HDL did not cause coronary disease, it was only a marker for the disease.
Looking back, it all seems so obvious.  Exercising raises HDL.  Maybe people who exercised had both higher HDL and lower heart disease.  Increased olive oil increases HDL.  Maybe olive oil both raises HDL and lowers heart disease.  Stopping smoking raises HDL.  Maybe stopping smoking both raises HDL and lowers heart disease.  This emphasizes again the danger of correlation studies.
Nevetheless, scientists moved forward trying to prove that dietary saturated fat increased cholesterol levels.  The Framingham studies were the ideal place to look. 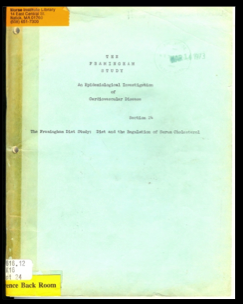 In 1948, Harvard University decided to undertake extensive testing in Framingham, Mass.  The bloodwork and dietary habits of an entire community would be monitored over decades to learn about the risk factors of heart disease.  Every 2 years, all residents would undergo screening with bloodwork and questionnaires.  By comparing those that developed heart disease and those that did not, they hoped to learn the factors that were important.
In the early 1960s, after massive human effort and expenditure the results of the Framingham Diet Study were available.  Hoping to find a definitive link between saturated fat intake, serum cholesterol and heart disease.  Instead what they found was no such thing at all.  Nada.  Nothing.  There was absolutely no correlation.  So they did what all researchers the world over do.  They buried the result.  Ignore the result and pretend the study never existed.
Dr. Michael Eades, writing on his blog, was able to find an old copy and peruse the results.  From his copy, he notes that the report states:

There is no indication of a relationship between dietary cholesterol and serum cholesterol level.

At least this part is consistent.  Dr. Ancel Keys noted much the same thing.  Physiology also backs up the fact that most of the cholesterol in our bodies is made by our own livers.
Even today, the National Cholesterol Education Program (NCEP) states:

Dietary cholesterol causes marked hypercholesterolemia in many laboratory animals, including nonhuman primates. High intakes of cholesterol in humans, however, do not cause such a marked increase in serum cholesterol

Translation – Non human primates should DEFINITELY avoid dietary cholesterol.  Humans, though, not so much.
Regarding fat:

Remember that original studies also showed no association of total fat and cholesterol.  It was only saturated fat that made a difference.  However, here, unlike the Seven Countries Study, animal versus plant fat made no difference.
The most important part is the relationship with heart disease.  Here’s the final conclusions of this forgotten jewel: 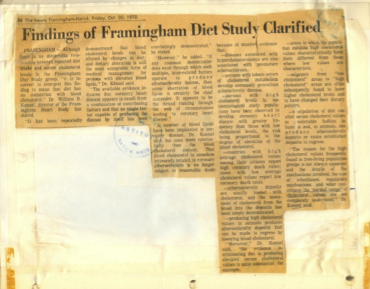 There is, in short, no suggestion of any relation between diet and the subsequent development of CHD in the study group

Yeah.  There was basically no relationship between diet and heart disease.  So much for the Diet-Heart Hypothesis.  This should have been the study to bury this mistaken hypothesis.  Instead, researchers chose to bury the study instead.  They condemned us to 40 years of a low fat future that included an epidemic of diabetes and obesity.
What is really sad is the news commentary by Dr. William Kannel, the director of the Framingham Heart Study.  He states that, just because his own study proved that diet has no connection with cholesterol, “it is incorrect to interpret this finding to mean that diet has no connection with blood cholesterol,”.  Dude – you makin’ no sense.
Over the next half century, no matter how hard we looked, there was no relationship between dietary fat and serum cholesterol.  Other studies, such as the Tecumseh study, continued to find no discernible relationship.  Even the National Cholesterol Education Program admits that “Dietary cholesterol causes marked hypercholesterolemia in many laboratory animals, including nonhuman primates. High intakes of cholesterol in humans, however, do not cause such a marked increase in serum cholesterol”
So non human primates should DEFINITELY avoid dietary cholesterol.  Humans, though, not so much.
Continue to Trans Fat – Hormonal Obesity XXXVI
Start here with Calories I – How Do We Gain Weight?
See the entire lecture – The Aetiology of Obesity 6/6 – Fat Phobia