I’ve often recommended switching to a diet higher in natural fats and lower in refined carbohydrates. What’s the deal with dietary fat? Simply put, dietary fat does not raise insulin. And hyperinsulinemia is the main driver of obesity. Hyperinsulinemia means literally, high insulin in the blood (hyper means high, and -emia means blood levels).
So, logically, switching refined carbohydrates (raises insulin) for dietary fat, can lower insulin levels significantly even if you take the same total number of calories. But what is so different about dietary fat compared to both protein and carbohydrates that makes this true? It all comes down to the different ways that proteins and fats are metabolized. 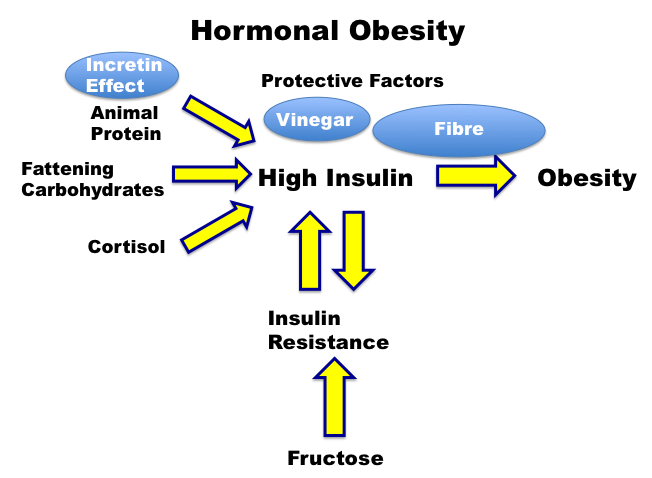 In this case dietary protein is not given a free ride, since it stimulates insulin. If you overeat dietary protein, according to the HOT, you can still develop obesity. This is the key insight behind the more recent LCHF (Low Carb, High Fat) movement rather than the pure Low Carb movement (Atkins and others) which do not restrict either fat or protein.
But there’s a fundamental difference in dietary fat metabolism that differentiates it from both proteins and carbs. It has almost no insulin effect. Why not? Because it doesn’t use the liver for metabolism. Insulin is only necessary for burning glucose, not fat.
So, during normal metabolism, the three macronutrients are absorbed and metabolized completely differently. Let’s start with carbohydrates. These are chains of glucose, mostly as amylopectin or amylose. There are different forms of amylopectin (A,B, and C) which are metabolized differently. Amylopectin A is the most easily digestible and the form found in bread. Amylopectin C is the least digestible and is found in beans. The reason beans make you ‘toot’ is because much of the indigestible amylopectin C makes it way into the colon where bacteria ferment them and create gas which comes out the bottom end to the endless amusement of little boys everywhere. Bananas contain amylopectin B, which is intermediate between A and C.
This difference becomes obvious in the glycemic index, which is a good indicator of the insulin effect for carbohydrate foods. The GI for wheat is very high, and for beans, it’s quite low. So, carbs are not equal, and not even amylopectin is equal. It is the insulin that drives weight gain, not the carbohydrates, so beans and bread are not equal despite the fact that they are both carbohydrates and both amylopectin. 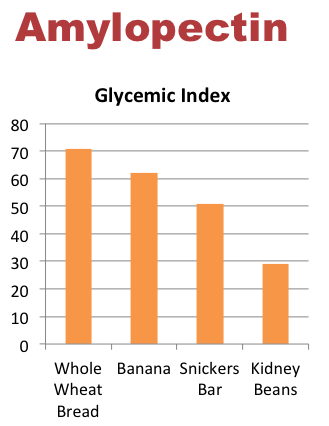 The amylopectin and amylose molecules are broken down into it’s component glucose molecules and absorbed into the portal circulation. This is the bloodstream that takes the absorbed glucose and carries it directly to the liver. In the liver, it is reformed into long chains called glycogen, which is a storage form of glucose (plants use amylopectin and amylose, animals use glycogen). However, storage capacity is low so the rest is turned into fat via De Novo Lipogenesis. This newly created fat is highly saturated palmitic acid, which is how high refined carbohydrate diets increase the blood levels of saturated fat, which is linked to heart disease.
Dietary protein is broken down into its component amino acids and absorbed. Some is required for protein turnover, but the amount is debatable. If you are trying to build muscle (body building) you require relatively high levels of protein. For the rest of us, a moderate amount is needed. How much? The Recommended Dietary Allowance is 0.8 g/kg lean body mass. For a 70kg man, this is about 56 grams of protein. For reference, this would be about 3 ounces of chicken, 3 ounces of tuna, a glass of milk and 1/2 cup of beans. That would be the protein needed for the entire day! You can see that most North Americans eat far, far in excess of the RDA. Consider that a typical burger now is 1/2 pound (or 8 ounces) by itself. There are many who argue that 0.5 g/kg is sufficient, too.
So what happens to the excess amino acids? They cannot be stored directly as energy, so they are converted to glucose via gluconeogenesis. This is a metabolic pathway that generates glucose out of non carbohydrate molecules. Here there are differences between amino acids as well. Some amino acids are able to produce glucose (glucogenic), some produce ketones (keogenic) and some do both. 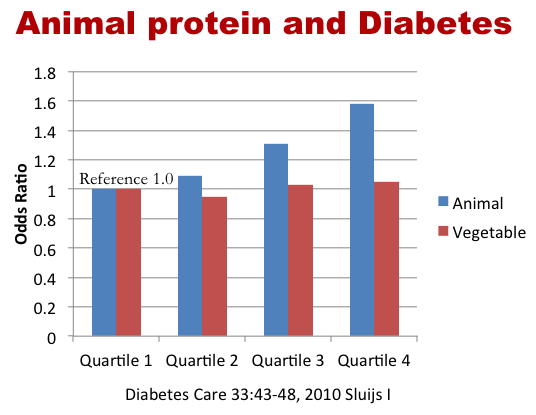 Once again, these amino acids are absorbed into the portal circulation and directed towards the liver where excess amino acids get turned into glucose. Since it requires liver processing, insulin is required as a signalling molecule. Since the protein does not raise blood glucose, even though it raises blood insulin, glucagon is also stimulated, as well as incretins that help mitigate this effect and prevent hypoglycemia. It is a surprise to some, that certain proteins stimulate insulin as much as the refined carbohydrates. Animal proteins have more insulin effect than plant proteins. Does this matter? Maybe. There is a higher risk of diabetes for increasing quartiles of animal protein.
Dietary fat, on the other hand is metabolized in a completely different manner than both carbs and proteins. Dietary fat broken down into fatty acids by pancreatic enzymes (lipases) and bile salts. They are then absorbed into the lymphatic system as fat droplets (fat is insoluble in water) called chylomicrons. These do not go into the portal system and do not enter the liver. Then empty directly into the bloodstream through the lymphatic circulation and then to the thoracic duct.
This is the reason why dietary fat does not require insulin. There is no further processing or handling, so insulin signalling in the liver is not required for metabolism. This dietary fat can be stored or used for energy. If you were to eat pure fat (say, Bulletproof Coffee), then no glucose or protein is ingested and insulin stays low. The body then simply burns fat.

There are essentially two fuel systems for the body. You can either burn fat, or burn sugar. These two fuel systems are separate and do not interact (see Randle Cycle for more details). When insulin levels are high, then the body runs on glucose. During that period, there is simply no reason for your body to burn body fat. Why would it? It’s there in case of emergencies, in case there is nothing to eat as a store of calories. It’s like a back-up generator. If you have power in the house, then the generator stays off and none of the fat is used up.
However, if you switch to a low carb, high fat diet, then there is little glucose available to run that fuel system. In this case, the ‘backup generator’ will kick in and start burning fat for fuel. That’s great, because more than anything else, we want to burn fat.

According to the older Carbohydrate-Insulin Hypothesis, Carbs are fattening, whereas Protein and Fat are not. Yet grouping protein and fat together makes no sense because protein metabolism has much more in common with carbohydrate rather than fat metabolism.
The more insulin-centric Hormonal Obesity Theory leaves dietary fat distinct from both carbs and protein. Both agree that refined carbohydrates need to be restricted. However, because excess protein is converted to glucose, it can stop ketosis and weight loss efforts. So here, carbohydrates and excess protein are treated similarly, where fat is distinct. This reflects a far more physiologically accurate picture of metabolism. 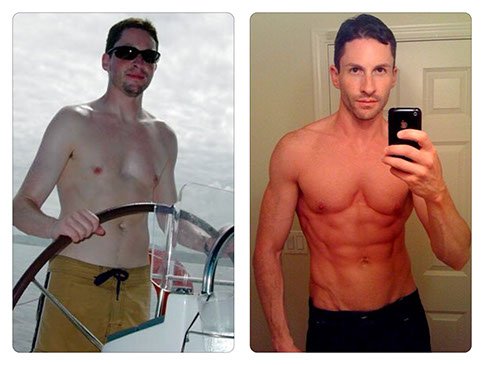 So, if you eat a low carb meal, but eat high protein (protein bars, protein shakes, whey powder etc), then your body will still be burning glucose as it ramps up gluconeogenesis to convert that excess protein to glucose. You are stuck in the ‘Burn Glucose’ fuel system. So you don’t burn fat. You want to lose body fat? You gotta burn it off.
It’s the reason Dr. Ted Naiman called his website burnfatnotsugar, whiere you can still see a picture of him pre-LCHF as a pasty white 98 pound weakling when he was a sugar burner. You can see he was still allergic to wearing shirts back then too.
What keeps you on the ‘Burn Glucose’ side? Insulin. Obesity is a disease of hyperinsulinemia. It’s the insulin, stupid! The solution then, is obvious – Low Carb, Moderate protein, High fat diets.