Click here to go to Exercise Part I, Part II, and Part III.
The commonly prescribed treatment for obesity is to Eat Less and Move More.  Epic Fail is the phrase that springs to mind.  What is most interesting to me is that this  has been proven to be a complete and utter failure, yet all the medical ‘authorities’ still recommend this great big bag of suck.
We’ve discussed the failure of the Eat Less model with the Calorie Series.  We are examining the other great pillar of conventional failure – exercise.
If exercise were indeed a major weapon in the fight against obesity, you might expect that countries that exercise more would have less obesity.  You might also be wrong.  A recent 8 country survey of exercise habits was recently completed.  You’ll never guess which country exercises the most.  That’s right.  The good ol’ United States of America.
Against a global average of 112 days of exercise a year, the Americans were burning up the circuit with a whopping 135 days compared to the slovenly Dutch at 93 days/ year.  The main motivation?  Weight Loss.
So what about rates of obesity?  Glad you asked.  There’s USA way over there on the right and those non-exercising Netherlands with a rate of obesity less than 1/3 of those iron pumping Americans. 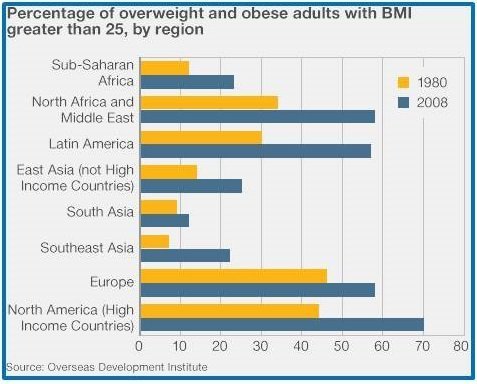 As the brilliant Dr. Andreas Eenfeldt of dietdoctor.com writes, “Obesity is not caused by a Lack of Exercise”.
Hundreds of millions of dollars have been spent studying this Eat Less, Move More approach.  A recent publication was called the HEALTHY study.  This was published in the prestigious New England Journal of Medicine in 2010 and entitled “A School-Based Intervention for Diabetes Risk Reduction“.  Let’s take a closer look.
This study involved 42 schools and 4603 students in grade 6-8.  Half of the schools received the multicomponent intervention.  The other half of the schools got nothing special.  The intervention was to encourage certain nutritional and exercise goals.
The nutritional guidelines involved the usual sort of failed staple of dietary interventions – low calorie, low fat.  Several goals included:

In other word – lower calories, lower the fat, and increase the grain and vegetables/ fruits.
The exercise component was designed to increase the amount of time doing moderate to vigorous physical activity.  Sounds like our old dingleberry friend – Eat Less, Move More. Not too bright, but as familiar as an old blanket.
Since hundreds of millions of dollars were spent on the Women’s Health Initiative and we didn’t get the results we expected, perhaps we thought that spending hundreds of millions of dollars more on the same failed strategy was a good idea.  Pure, unadulterated idiocy seems relatively common in academic nutritional circles.
The primary outcome of the HEALTHY study was the combined prevalence of overweight and obese students at the end of the study.  The study itself was very rigorous and well executed.  There was good follow up out to 3 years.  At the beginning of the study, both groups had roughly 50% of the students considered overweight or obese (BMI >85th percentile).
What happened?  By the end of three years, both groups had reduced that percentage to about 45%.  In other words – there was no measurable benefit to this diet and exercise group compared to doing nothing special.  It’s virtually useless.
Keep in mind that this is not the first study to show how useless this approach actually is.  All large studies show that same pattern.  Here’s a better question.  Who hasn’t tried the Eat Less and Move More approach and failed?
The fact that exercise does not help with weight gain does not mean that exercising is not good for you, or that it should not be done.  Don’t wig out on me.  I am not saying you shouldn’t exercise.  But that doesn’t change the fact that it is of minor importance in weight control.
It is like brushing your teeth.  Should you brush your teeth?  Absolutely.  But don’t expect any weight loss.  Same thing as exercise.  Is it good for you?  Absolutely.  But don’t expect any weight loss.
These are not simply idle musings.  The health implications are enormous.  Consider the enormous sums of money being spent to promote Physical Education in the classroom, improved access to sports facilities, and improved playgrounds for children in inner city neighborhoods.  While each of these things is good, we should not expect any improvement in obesity.  They are all based on the flawed notion that exercise is important in the fight against obesity.
What happens is that we ‘take our eyes off the ball’.  If our goal is to reduce obesity, we need to focus on what makes us obese.  It is not the lack of exercise.  It is the diet.  It is What You Eat, and as we shall see in the next series – it is When You Eat.
But if we instead spend all our money, research, time and mental energy focuses on increasing exercise, we will have no resources left to actually fight obesity.  Remember the example with baseball and bunting.  While bunting is important, we should not spend 50% of our practice time on bunting because it is simply not THAT important.
If you spend all your time practising bunting, there is no time left to practise hitting, fielding, and pitching which matter far, far more in the game of baseball.
Suppose that we are writing a final examination called Obesity 101.  95% of the exam will be based on the “Diet” portion and 5% of the exam will be the “Exercise” portion.  Yet we spend 50%, 60%, 70% of our time and energy studying the “Exercise” portion.  Isn’t that crazy stupid?
It is no wonder that we are failing this final exam.  We think that we can study even more, put more resources into studying and we will be OK.  But it turns out we have been studying the wrong section called “Exercise”.
We have failed to understand the most basic part of obesity – What CAUSES obesity (the aetiology).  We need to understand The Aetiology of Obesity before we can expect to cure it.  We will leave the topic of exercise and now focus again on the causes of obesity.
Continue here for Hormonal Obesity VI
Begin here for Calories I
See the entire lecture – The Aetiology of Obesity 1/6 – A New Hope