The Evidence for Caloric Restriction

There are many people, highly educated and believing themselves intelligent, that say that all diets come down to calories. So, any diet that works automatically comes down to cutting calories. It seems to be a fallback position of many academics and researchers and others who tend not to live in the real world. They say ‘This diet (Paleo, Low Carb, Whole Food etc) works because it creates a ‘caloric deficit’. That is, reducing the calories you eat will create a caloric deficit. They often invoke the old Calories In Calories Out rule. 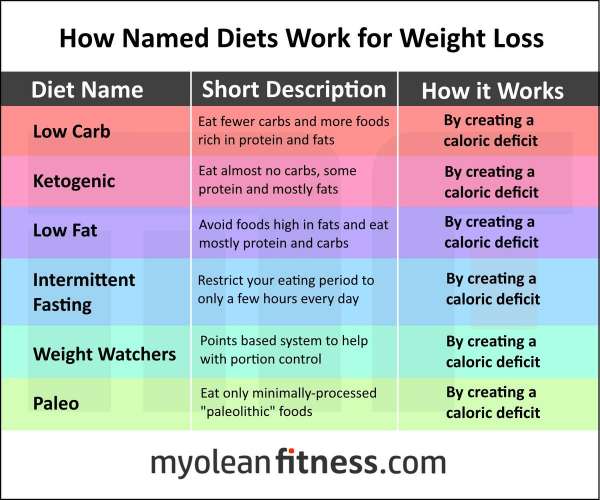 Change in Body Fat = Calorie Intake – Calorie Output. Yes. This is true. This is, of course, analogous to the crowded bar. Change in Bar Crowd = People In – People Out. But so what? Who cares?
The first law of Thermodynamics is always true, but completely irrelevant to human health. Yes, if Calories In is more than Calories Out then you will gain fat. But if you eat more Calories, you will burn more calories. If you eat less calories, you will burn less. So there is no overall change in body fatness. Just like the bar – if more people come in, but more people leave, then there is no change.
The problem is that people now make the entirely unwarranted assumption that Calorie Output remains stable so that reducing calories intake (food) automatically results in loss of body fat. This is why I see tables like this, that are liked by so many. As I’ve written about many times, this is utterly false. Basal metabolism may increase or decrease up to 40%.
But this false belief results in the strategy that I call Caloric Reduction as Primary (CRaP). So many people believe that simply reducing calorie intake is a reasonable strategy of weight loss. They think that hormonal changes (mostly insulin and insulin resistance) created by intermittent fasting or paleo or ketogenic diets are irrelevant. For them, it’s all about calorie intake. But, we believe in evidence based medicine. So, where is the evidence that reducing calorie intake as the primary strategy results in long term meaningful weight loss?
People assume that it is a scientifically proven fact that reducing ‘Calories In’ will cause long term body fat loss. Experimentally, this is simple. Take some people. Randomize them. Give some of them calorie restriction. Watch them lose weight and live happily ever after. The others who continue with their usual diet don’t lose weight. Simple. 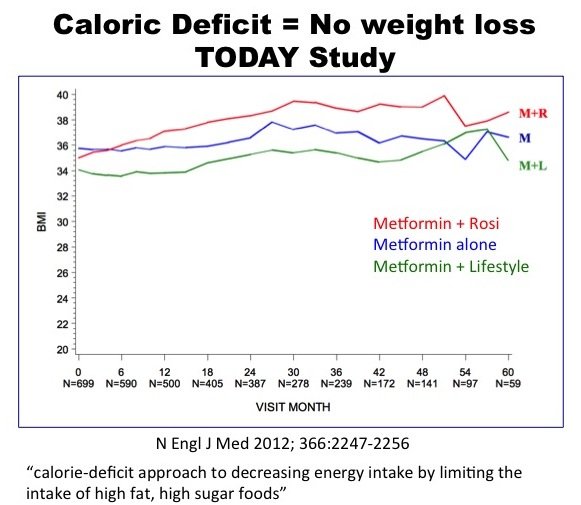 Can somebody please point out those studies to me? We’ve recommended the ‘Eat Less, Move More’ strategy for almost half a century. Where are all these studies? Oh, right. They all conclusively show that CRaP does NOT produce long term weight loss. Let’s look at some of these studies. Especially the randomized controlled ones.
The TODAY study was a study of diabetics using medication (metformin)  with or without lifestyle changes. This was primarily the calorie-deficit approach so beloved by academic physicians. The main study showed that this CRaP method produced no clinical benefits in diabetes management. What about weight loss?
Let’s see. At the beginning of the study, the average Body Mass Index of the lifestyle group was 34. After 5 years of dietary counselling to reduce calories, the average BMI was…….. 34. Nice job, guys. Glad you spent the last 5 years of your life counting calories? 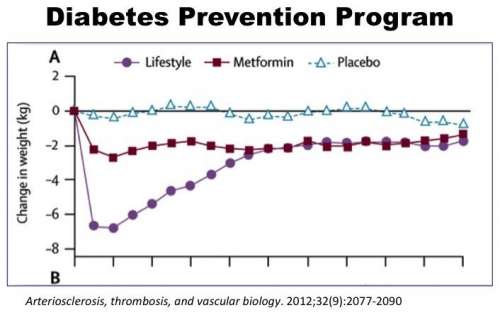 The Diabetes Prevention Program was another randomized lifestyle study that aimed to prevent diabetes, which was, in fact successful. But the question here is about weight loss.
With intensive counselling to reduce intake of calories weight loss was terrific (7kg). At first. In the long term, not so much. In a pattern familiar to every person who has ever dieted, the weight starts to regain despite continued compliance to the diet. Within a few years, there is only a small difference in weight (2 kg or less than 5 pounds) and by the end of the study, there is virtually no difference.
Body weight decreases nicely within the first 6-12 months, but thereafter shows steady weight regain. 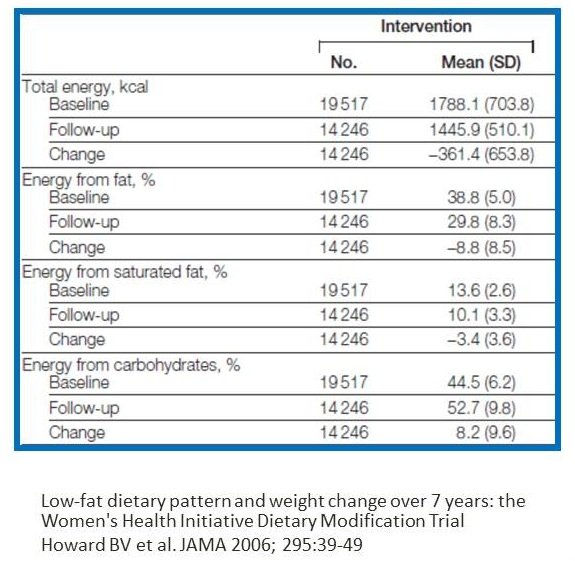 What about non-diabetics? Let’s look at the Women’s Health Initiative. Almost 50,000 women were randomized into the trial and given instructions to reduce their fat intake. This is the largest and most important nutrition study ever done of the low fat caloric restriction diet intervention.
Over 7 years, women reduced their daily calorie intake by 361 calories per day. They reduced their percentage of calories from fat and increased their carbs. They also increased their daily exercise by 10%
Sounds like they followed the ‘Eat Less, Move More’ advice to a tee. So they must have lost lots of weight and thanked their academic doctors profusely as they slipped into their skin-tight yoga pants. 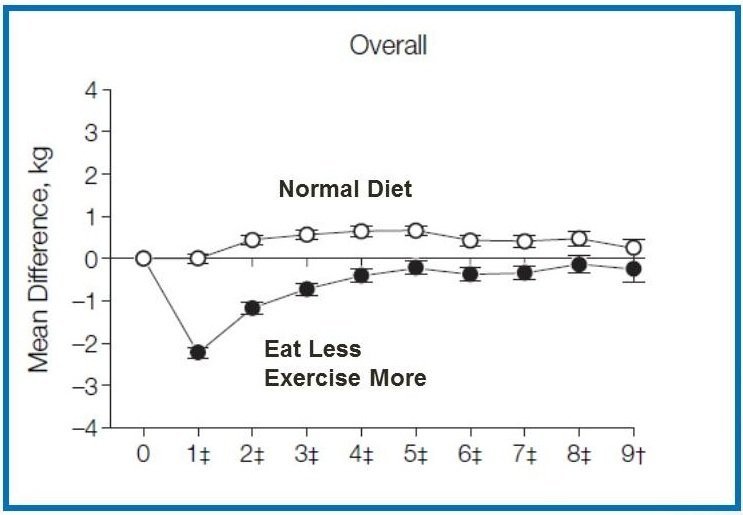 Yeah, not really. Here’s what happened to weight loss. Against the comparison group that followed their usual diet, there was an initial weight loss, followed by the now familiar weight plateau and then eventual regain. There were no improvements in waist circumference either.
There are many who complain that this was not specifically a weight loss study. It’s always easy to nitpick study design after the fact. But the fact remains that two groups were randomized. One received dietary counselling to reduce calories, specifically from fat. As a result, calories were reduced. Isn’t it all about calories?
Let’s also use a little common sense here. Is this WHI result so unbelievable? Hundreds of millions of people have followed a calorie reduced diet. I certainly have tried it. What’s our personal experience? Pretty much exactly like the WHI study proved.
Also, it is important to note that women did, in fact, stick to their calorie reduced diet. Yet the weight regain still happened. BUT it wasn’t because of non compliance. This is often ignored, because physicians giving the dietary advice want desperately to believe that people fail on their diets because they didn’t follow it. They simply cannot face the super-obvious but highly inconvenient truth staring them in the face. If these women followed the diet, but still failed to lose weight – the problem is the DIET, and not the PATIENT. Doctors cannot play their favourite game of ‘Blame the Victim’.
So, every single diet works by reducing calorie intake, right? But every single study of reducing calorie intake shows no benefit in weight loss. How does that work? Where is this magical fairyland where reducing caloric intake automatically causes long term weight loss? How can all diets be successful only to the extent that they reduce caloric intake, when reducing caloric intake is proven to NOT cause weight loss?
We profess to live in an age of evidence based medicine. But this only seems to apply to everything that is not the accepted conventional wisdom. The status quo always gets a free pass. Where is the evidence that cutting calories causes weight loss? Bueller? Bueller?