Why Exercise is Not Effective for Weight Loss – Exercise Part II

In the conventional view of obesity, diet and exercise are commonly prescribed treatments for obesity as if they are equally important.  Sort of 50% diet and 50% exercise prescription.  A simple calculation will illustrate the glitch in this thinking.
Basal energy expenditure (BEE) is estimated to be roughly 12-15 calories per pound.  In the bed bound state (lying in bed all day), caloric needs are estimated to be 1.2 times BEE.  So, for a 140 pound person, the estimated daily caloric needs are 2200 – 2500 calories per day.
If we now start to exercise by walking at a moderate pace (2 miles/hour) for 45 minutes every day, that would burn roughly 104 calories.  In other words, that will not even consume 4%of the BEE.  And that is assuming you do this every day.  If you were to exercise at a more vigorous pace, this may go up.  But how much?  6% of BEE?  Go crazy and get to 8% of BEE? 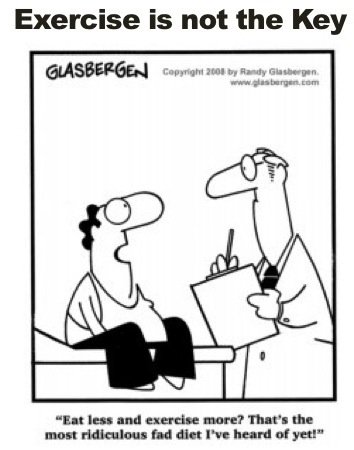 The immutable fact remains that the vast, vast, vast majority (96%) of caloric intake is used to heat the body and other metabolic housekeeping (keep the heart beating, breathing, digestion, brain function, liver and kidney function, etc.).
So diet and exercise are not 50/50 partners like macaroni and cheese.  Diet is Batman and exercise is Robin.  Diet does all the work, and deserves all the attention.  Focusing too much attention to exercise simply distracts us.  It is as bad an idea as making a major motion picture with equal billing to Batman and Robin (yeah, it was… horrible).
MAKE NO MISTAKE – Exercise is good for you.  There are many benefits to regular exercise.  Weight loss, though, is not one of the benefits.
Exercise results in better muscle tone, increased insulin sensitivity of muscles, increased strength and increased bone density.  So, I am not suggesting that you should not exercise. YOU SHOULD GET REGULAR EXERCISE.  Just don’t expect that you will lose weight. 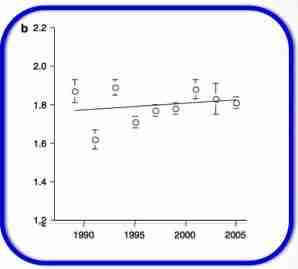 We need to focus our attention on the 95% portion of the equation.  That means that while exercise is important for overall health, when we are talking weight loss and diabetes, we need to focus on the diet part.
Let me use a baseball analogy.  Suppose we consider that bunting is important in the game of baseball.    But it is only important for about 5% of the game.  The rest is hitting, pitching and fielding.
But then, we spend 50% of our time practising how to bunt the baseball.  That’s simply ridiculous.  Only 5% of our practise time should be allotted to bunting and the rest to hitting, fielding and pitching.
The same applies to weight loss.  95% of weight loss is diet and 5% is exercise.  While exercise is important, it  is not equally important.  So, for weight loss, we must focus on diet.  If you decide, however, to spend 10 hours a day exercising – that is a different story.
What about this idea that we are so much lazier than we used to be.  That we now sit on our a** all day and that is why we got fat.  In the previous post we covered some recent research into hunter-gatherer societies.
Let’s look at this article entitled “Physical activity energy expenditure has not declined since the 1980s and matches energy expenditures of wild mammals” 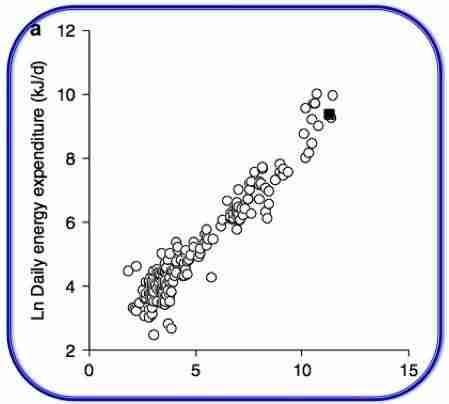 Physical activity energy expenditure was measured using doubly labeled water in a northern european population. Values were calculated from the 1980′s (before the obesity epidemic came into full swing) to the mid 2000′s.  The results are in the graph above (Energy Expenditure).
If anything, physical activity has NOT decreased since the 1980′s but actually increased.  Whoa.  Kind of blows your mind away, doesn’t it?  But the authors went even further.  They calculated the predicted energy expenditure for a wild mammal which is predominantly based on body mass and ambient temperature.
Compared to wild mammals, homo obesicus 2013 is not less physically active than its wild mammal cousins such as the vigorous appearing cougar, fox and caribou.  With your mind whirling I’ll give you their conclusions.  It kind of says it all.

Yet, with the contrary evidence all around, nutritional authorities, as dogged as a turtle crossing a road, continue to tell us to exercise as the key to weight loss.  OK Robin.  Enough already.  Go practise your bunting.
Exercise is not nearly as effective as we think that it is due to several compensatory mechanisms.  One that we looked at in the previous post is the phenomenon of “compensation”.  That is the tendency to compensate for vigorous activity in daily activities by reducing activity in ‘spare’ time.  Most of us are already aware of this phenomenon and it has been present in most studies of exercise for much of the last 2 decades.
Look at this study “Physical activity, total and regional obesity: dose-response considerations.” Med Sci Sports Exerc 33: S521-527 2001″ by Ross R et al.
We can see that for most studies that lasted over 25 weeks, the weight loss was only 30% of expected.  This study”Changes in Weight, Waist Circumference and Compensatory Response with Different Doses of Exercise” showed much the same result.
If we examine a more recent randomized study “Aerobic exercise alone results in clinically significant weight loss“, we might still hold some hope for exercise as a method of weight loss.  Patients were randomly assigned to exercise (600 calories/sesssion, 5 days/week) or not over 10 months.  Those who exercised lost an extra 10 pounds.  Aha!  Proof that exercise is effective for weight loss!
But calculate the caloric loss.  600 calories/session times 5 days/week times 10 months divided by 3600 calories/pound is…. 35 pound expected weight loss.  In other words – exactly as the other study showed, weight loss is only about 1/3 as effective as you might expect.
This principle also is important for children.  At the 2009 European Congress on Obesity a study was presented by Alissa Fremeaux.  Studying physical education classes in school, she compared the total weekly activity of 206 students aged 7 and 8 who either received physical education in school or not.  The PhysEd group received an average of 9.2 hours per week of exercise through school.  The other group got none.
The study then went on to measure total physical activity with accelerometers over the week.  You might think “Wow, that’s great.  All this extra exercise must be good for them.”  You would be correct, if only it were true.  It turns out that there is no difference in total activity over the week.
That’s right.  You read that correctly.  There is not even a little bit of difference between the 2 groups.  How can that be?  Those who go extra exercise in school compensated by doing less at home.  Those who got no exercise in school compensated by doing more.  In the end it was a wash.
In the end, the well described phenomenon of compensation can be summed up in one photo: 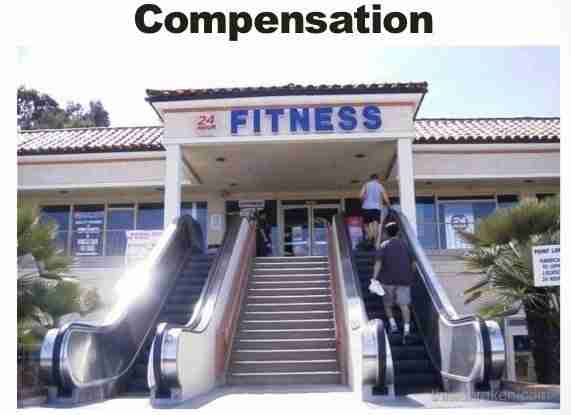 That is – yeah, we’ll do the exercise, but we’ll take the escalator to the step classes that we paid for.
Continue to Exercise part III here
Begin here with Calories I
Click here to watch the entire lecture – The Aetiology of Obesity 1/6 – A New Hope