Exercise is not Total Energy Expenditure

Exercise is often (wrongly) assumed to be extremely important for weight loss. Watching popular shows such as ‘The Big Loser’ often portray exercise as the most important factor in weight loss. Courageous Drs. Malhotra, Noakes and Phinney recently pointed this out in a recent editorial.  The reason for this commonly made error lies in the misunderstanding of Total Energy Expenditure or ‘Calories Out’. Consider the following:

Fat gained = Calories In – Calories Out

This is sometimes called the First Law of Thermodynamics. It’s funny how nutritionists always reference thermodynamics, drawn to as children to amusement parks, but physicists who spend decades studying thermodynamics never, never, never talk about calories. Like the smelly annoying kid with no friends, calorie-enthusiants want to pretend that nutrition, too, is a ‘hard science’ like physics with ‘inviolable’ laws. Sad, and more than a little pathetic. Any who…
In this equation – we can easily measure “Fat Gained” and “Calories In” The main focus, then should be on the ‘Calories Out’ part of the equation, not the ‘Calories In’. This is what exercise enthusiasts have always preached. However, what is the ‘Calories Out’ portion of the equation?
The amount of calories used in a day (Calories Out) is more accurately termed total energy expenditure (TEE) – the sum of basal metabolic rate (BMR), thermogenic effect of food (TEF), non-exercise activity thermogenesis (NEAT), excess post-exercise oxygen consumption (EPOC) and, of course, exercise.

The key point here is that TEE is not the same as exercise. The overwhelming majority of TEE is not exercise but the BMR: metabolic housekeeping tasks such as breathing, maintaining body temperature, keeping the heart pumping, maintaining the vital organs, brain function, liver function, kidney function, etc.
Let’s take an example. BMR for a lightly active average male is roughly 2500 calories per day. Walking at a moderate pace (two miles per hour) for forty-five minutes every day, would burn roughly 104 calories. In other words, that will not even consume 5 percent of the TEE. The vast majority (95 percent) of calories are used for basal metabolism.
What is typically done is to assume that BMR, TEF, NEAT and EPOC are all constant over time, and therefore we only have to worry about exercise. This is absolutely false. BMR depends on many factors, including

NEAT is the energy used in activity other than sleeping, eating or exercise; for instance, in walking, gardening, cooking, cleaning and shopping. TEF is the energy used in digestion and absorption of food energy. Certain foods, such as dietary fat, are easily absorbed and take very little energy to metabolize. Proteins are harder to process and use more energy. TEF varies according to meal size, meal frequency and macronutrient composition. Excess post-exercise oxygen consumption (EPOC—also called after-burn) is the energy used in cellular repair, replenishment of fuel stores and other recovery activities after exercise.
Because of the complexity of measuring BMR, NEAT, TEF, and EPOC, we make a simple but erroneous assumption that these factors are all constant over time. This assumption leads to the crucially flawed conclusion that exercise is the only variable in TEE. Thus, increasing Calories Out becomes equated with Exercise More. One major problem is that the BMR does not stay stable. Decreased caloric intake can decrease BMR by up to 40 percent. Increased caloric intake can increase it by 50 percent.
What determines the energy output of the system? Suppose we consume 2,000 calories of chemical energy (food) in one day. What is the metabolic fate of those 2,000 calories? Possibilities for their use include

We certainly don’t mind if energy is burned as heat or used to build new protein, but we do mind if it is deposited as fat. There are an almost infinite number of ways that the body can dissipate excess energy instead of storing it as body fat.
So now our equation looks like this

All of these are highly variable depending upon genetics, gender, age, weight, height, diet, body temperature, external temperature, cognition, new bone/protein/muscle synthesis, and organ function. Do you still think cutting a few ‘Calories In’ a day will work? Do you really think increasing Exercise, which is only 5% of the game will make a difference?
Not likely. Diet and exercise are important, but they are not equally important like macaroni and cheese. Diet is Luke Skywalker and Exercise is an Ewok. Consider a baseball analogy. Bunting is an important part of the game, but perhaps only 5% of it. Should we spend all our energy and practice time on the bunt? Obviously not. Putting too much emphasis on bunting hurts us because it does not leave time to practice more important parts of the game – pitching, hitting and fielding.
Exercise is the same. Sure, it’s important for a number of very good reasons. But we can’t expect it to produce significant weight loss. It’s a minor player. Emphasizing exercise detracts from the real issue of dietary problems.

The fact that exercise never produces as much weight loss as we think has actually been well known in research for several decades, at the minimum. Why does actual weight loss fall so far below projected? The culprit is a phenomenon known as “compensation”—and there are two major mechanisms.
First, caloric intake increases in response to exercise—we just eat more following a vigorous workout. (They don’t call it “working up an appetite” for nothing.) A prospective cohort study of 538 students from the Harvard School of Public Health found that “although physical activity is thought of as an energy deficit activity, our estimates do not support this hypothesis.” For every extra hour of exercise, the kids ate an extra 292 calories. Caloric intake and expenditure are intimately related: increasing one will cause an increase in the other. This is the biological principle of homeostasis. The body tries to maintain a stable state. Reducing Calories In reduces Calories Out. Increasing Calories Out increases Calories In.
The second mechanism of compensation relates to a reduction in non-exercise activity (NEAT). If you exert yourself all day, you are less likely to exercise in your free time. The Hadza, who were walking all day, reduced their physical activity when they could. In contrast, those North Americans who were sitting all day probably increased their activity when given the chance. 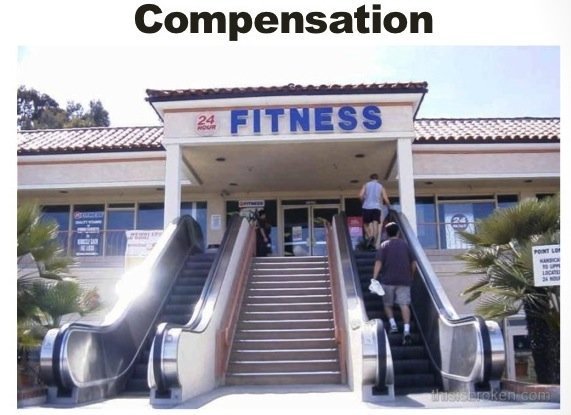 This principle also holds true in children. Students aged seven and eight years who received physical education in schools were compared to those who did not.16 The physical education group received an average of 9.2 hours per week of exercise through school, while the other group got none.
Total physical activity, measured with accelerometers, showed that there is no difference in total activity over the week between the two groups. Why? The PhysEd group compensated by doing less at home. The non-PhysEd group compensated by doing more when they got home. In the end, it was a wash.
In addition, the benefit of exercise has a natural upper limit. You cannot make up for dietary indiscretions by increasing exercise. You can’t outrun a poor diet. Furthermore, more exercise is not always better. Exercise represents a stress on the body. Small amounts are beneficial, but excessive amounts are detrimental.17
Exercise, is simply not all that effective in the treatment of obesity—and the implications are enormous. Vast sums of money are spent to promote physical education in school, the Let’s Move initiative, improved access to sports facilities, and improved playgrounds for children—all based on the flawed notion that exercise is instrumental in the fight against obesity.
If we want to reduce obesity, we need to focus on what makes us obese. If we spend all our money, research, time and mental energy focused on exercise, we will have no resources left with which to actually fight obesity. This is NOT to say that exercise is not healthy for you. It is like brushing your teeth.  Good for you, do it every day, but don’t expect to lose weight.
We are writing a final examination called Obesity 101. Diet accounts for 95 percent of the grade, and exercise for only 5 percent. Yet we spend 50 percent of our time and energy studying exercise. It is no wonder that our current grade is F—for Fat.
See The Exercise Myth – Part I