The current treatment paradigm of type 2 diabetes is the blood glucose paradigm. Under this paradigm, most of the toxicity of T2D is done by the hyperglycemia. Therefore, it follows that lowering blood glucose will amerliorate the complications even though we are not directly treating the T2D itself (high insulin resistance). The ACCORD study was a test of this glucotoxicity paradigm, and unfortunately, a complete and abject failure. Patients were randomized to tight blood glucose control versus usual control, with the expectation that tight control would show tremendous benefits. Instead, the trial proved there were none.
The mainstream media is picking up the fact that our current drug therapies for type 2 diabetes don’t seem to be of much use to anybody. The Canadian Broadcasting Company, for example, headlined that ‘New Study questions type 2 diabetes treatment – No evidence glucose lowering drugs help ward off complications”. Exactly right. Drugs don’t cure a dietary disease. Type 2 diabetes is a disease of insulin resistance and hyperinsulinemia. So why focus on lowering blood glucose, which is only the symptom? Isn’t that useless? Yes. Yes it is. You need to lower insulin, not glucose, because the disease is about too much insulin.
The problem is one of perspective. As long as you believe that hyperglycaemia is the main cause of morbidity, you expect that lowering blood glucose to provide benefits. The ACCORD proved this glucotoxicity paradigm is incorrect. Instead, the high blood glucose results from insulin resistance. That is the disease. And insulin resistance is due to hyperinsulinemia.
Imagine it this way. Type 2 diabetes is essentially a disease of too much glucose in your body. Not just the blood, but the entire body. If you fill up the cells of your body with glucose, pretty soon, no more can be pushed into the cells, so glucose spills over into the blood. But the underlying problem is an overflow problem. Insulin resistance is an overflow of glucose.
Using more insulin to move the toxic glucose from the blood into the cell accomplishes nothing. This is exactly what the study showed. If you have too much glucose in the body, you can do two things – don’t put any more in, or burn it off. Simply moving the glucose around the body so you can’t see it is not useful. And that’s what all these medications do.
Interestingly, the ACCORD study was not the first failure of the blood glucose paradigm. The UKDPS study was also unable to significantly reduce cardiovascular events or prevent deaths with intensive blood glucose lowering in type 2 diabetes. This was not even the first time that treatment increased death rates. The Veterans Affairs Diabetes Feasibility Trial also found an increase in death rates in the intensive group, but it was not statistically significant because of the small trial size. The earlier University Group Diabetes Program had also compared an intensive versus standard group. It, too was unable to find any benefit to intensive treatment. One certain subgroup, suing tolbutamide (a sulfonylurea medication that increases insulin) did have a higher death rate, though.
It would also start a parade of failures including the ADVANCE, VADT, ORIGIN, TECOS, ELIXA and SAVOR studies. It was not a single study that failed. There were multiple failures all over the world.
The failure should have burned away the prevailing glucotoxiciy paradigm like Enola Gay’s kiss. Certainly, at very high blood sugars there is harm to the body. But at the moderate levels of blood sugar seen in controlled type 2 diabetes, there was no benefit to further lowering. If you lower the blood glucose with medications such as insulin, there is no benefit. So clearly, the damage to the body does not result from glucotoxicity alone. The problem is that insulin itself in high doses can be toxic. 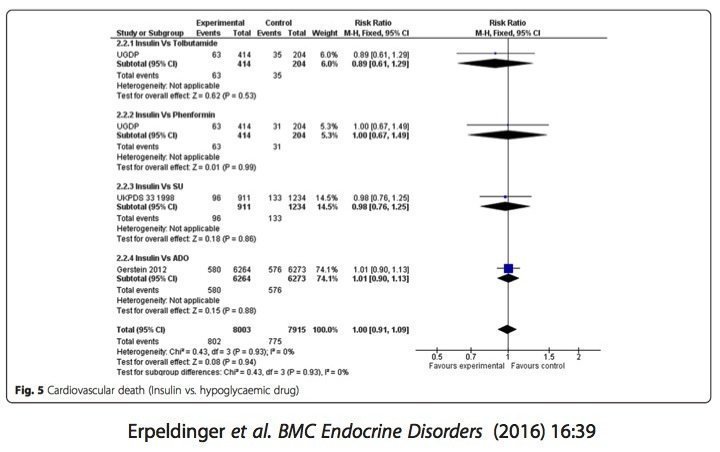 By 2016, a meta-analysis of all studies proved conclusively the futility of the blood glucose paradigm. Whether you are looking at overall deaths, heart attacks, or strokes, tight blood glucose lowering had no benefits at all.
However, these failures were not enough to convince diabetic associations to embrace new treatment paradigms. They were set in their ‘glucose or bust’ mindset and nothing could change their minds. So they refused to change their treatment strategies despite proof that these were complete failures. Their strategy of ‘prescribe medication to lower blood glucose’ had no been proven to have no significant health benefits. So, reflecting upon this new information, they decided that the correct strategy is ‘prescribe medication to lower blood glucose’. O…M….G…
For example, the Canadian Diabetes Association in 2013 guidelines still continues to recommend a target A1C of 7%. Why? Haven’t we just proven that lowering A1C from 8.5% to 7% provides no benefit? Why would we give more medications for no benefit. Isn’t that totally stupid? Yes… Yes it is. But there you go. The CDA can’t very well say “We have no clue what you should do”, so they give guidelines that go directly AGAINST the available evidence. Kind of like a Bizarro world Evidence Based Medicine.
Then they write “Glycemic targets should be individualized”. If there should not be a target, then say so, dammit. This is precisely what this paper describes. There is no evidence for benefit of tight glcemic control, yet 95% of diabetic guidelines recommend target blood glucose and tight control. WTF?? 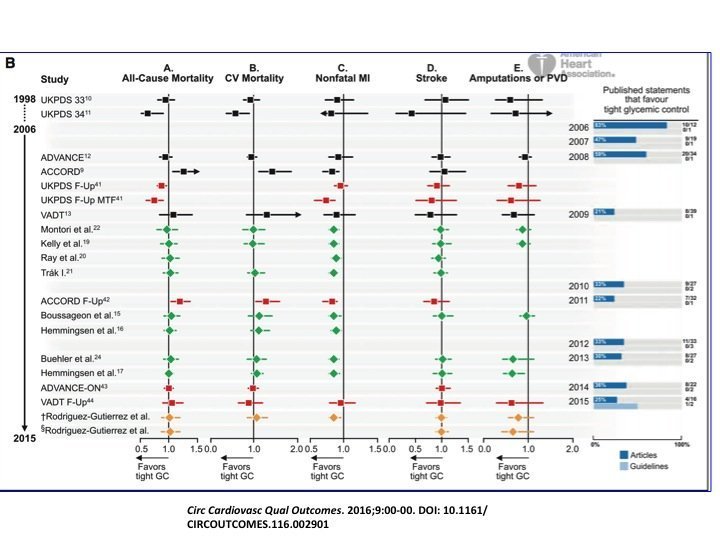 This slide compares the effect of tight glucose control on the outcomes of most importance to clinical medicine – death, heart attacks, strokes and amputation. Virtually all studies show there is no benefit for any of these outcomes.
Statements published that recommend tight control have been slowly dropping since the ACCORD study. When study after study comes out to refute the hypothesis, you might suspect something is up. In 2006, most published statements still recommended tight control. By 2016, only 25% did. That is, the overwhelming majority of experts knew that tight blood glucose control was irrelevant. So, why do we still obsess over blood glucose numbers in T2D?
Unfortunately, it’s likely because diabetes specialists have not yet understood that this disease is about hyperinsulinemia, not hyperglycaemia. The drug companies, on the other hand, are all to happy to leave the status quo, which is extraordinarily profitable for them.