The cancer drug known as Gleevec (United Stated) or Glivec (Europe) is the unquestioned superstar of the genetic approach to cancer. It is the LeBron James, Michael Jordan and Wilt Chamberlain all rolled up into one. It is used in the treatment of chromic myelogenous leukemia (CML),  a relatively rare cancer. Before Gleevec, CML killed 2300 Americans and after Gleevec, in 2009, it only killed 470 people – all using an oral medication with virtually no side effects. This is a truly amazing drug, so dramatically successful that it was thought to be the herald of an entirely new era of chemotherapy. At its introduction in the early 2000s, it was the dawn of a new age of targeted genetic ‘cures’ for cancer. Gleevec was supposed to be the beginning, not the end. But like any one-hit wonder, the first turned out to be the best. 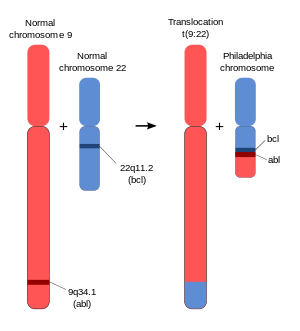 Genetic treatments will work wonders for genetic diseases, but the specific circumstances surrounding CML did not apply to most of the common cancers (breast, colorectal, prostate) that we face today. CML is almost completely a genetic disease caused by the mixup of chromosomes during cell growth. Normally, when cells divide, they provide exactly the same chromosomes to each new cell. However, in CML a piece of chromosome 9 ended upon chromosome 12 and vice versa. Named for the city of its discovery, it was termed the ‘Philadelphia chromosome’. Virtually all patients with CML had this Philadelphia chromosome, and in 1960, it became clear that this genetic aberration caused the cancer.
This swap in chromosomes caused the cells to make an abnormal protein (BCR/ABL). This protein is a signalling molecule called a kinase, which works like an accelerator on cell growth. Normally, this kinase would be turned on and off according to a precise pattern, just as you would use the accelerator on your car carefully speed up or slow down, according to traffic signals. The abnormal bcr/abl protein turned cell growth ‘on’ and never let up. It stepped on the gas full bore, and never let up. 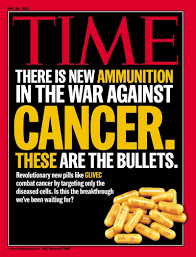 The solution, then is to block this bcr/abl kinase to ease the gas on cell growth and cause the cancer to subside. In 1993, the drug firm Ciba-Geigy (now Novartis) tested several kinase inhibitor, and selected the most promising candidate. This drug, now called Gleevec, could block the kinase in question so human drug trials began. The Phase I studies are generally performed to see if there are any drug toxicities, without much thought about whether the drug worked or not. Of the 54 patients that wound up with a dosage over 300 mg/day, 53 responded. This was a bloody miracle.
The phase II trials that followed were equally astounding. For early stage disease 95% of patients were cleared of their leukemic cells. Even more astounding was that in 6 of 10 patients, the causal Philadelphia chromosome could no longer be found. Patients were essentially cured of their disease. Amazing. The accolades would not stop. Time magazine put it on its cover in 2001. Over and over, physicians, scientists and patients proclaimed it a miracle drug. But more than that, it would only be the vanguard in the coming onslaught of new molecular targeted medications. These would be the ‘smart bombs’ of the cancer arsenal. Instead of creating widespread destruction like the older chemotherapy, it would hone in on specific targets of interest and destroy. Older chemotherapy, the stalwart work horse of cancer treatment, after all are simply poisons. They kill faster growing cancer cells slightly faster than the normal slower growing cells of the body. Fast growing normal cells (like hair follicles) were the collateral damage.
But, unfortunately, the success of Gleevec would not be repeated in the ensuing 16 years. CML was an aberration among cancers. Virtually all CML was driven by a single mutation (the Philadelphia chromosome) but more importantly, it was the same mutation in everybody. That is, 20 cases of CML would all share the same problem. In other cancers, this is not true.
In 2006, Vogelstein at Johns Hopkins checked the genetic mutations of 11 breast and 11 colon cancers. Each cancer case had different genetic mutations from each other. Genetically, they barely resembled each other, sharing no more than a handful of genes. And that is only considering the 122 ‘validated’ driver mutations and ignoring the 550 or so bystander mutations.
Using the same principles of therapy as Gleevec would require 10-20 ‘smart bomb’ medications for any individual patient. Worse, these ‘smart bombs’ would need to be individually targeted because two clinically identical patients would need 20 completely different treatments. The combinations are practically infinite. Treatment is impossible.
To be sure, there are some successes along the way. The development of targeted drugs to Her2/neu (Herceptin) in certain cases of breast cancer was a real boon to patients. But unfortunately, these successes are few and far between. Two drugs in 16 years of research is hardly ‘winning the war on cancer’. And it was not for lack of trying. Virtually every pharmaceutical company in the world, along with every major university funded by promises of a pot of gold, and fundraising by cancer foundations was desperately trying to find the next Gleevec. 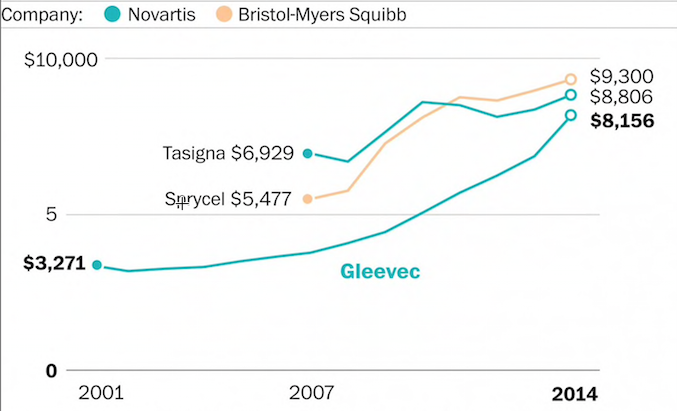 So, with Gleevec, we managed to win a minor border skirmish, even as we were losing the overall war. Cancer was delivering us kicks to the head and punishing body blows. We had managed to mess Cancer’s fancy hairdo and called it a breakthrough. It was a major improvement in a minor disease. So, with such a limited market for Gleevec, and no prospects for the future, what was left for the drug company Novartis? Why, to raise prices, of course! At its launch in 2001, the annual cost was $26,400 per year. Steep, to be sure, but this was a miracle drug.
By the end of 2003, Gleevec sales totalled $4.7 billion worldwide – a mega blockbuster. And still, the prices edged higher. Starting in 2005, prices rose about 5% more than inflation. By 2010, prices rose 10% per year above inflation. Adding further to the bottom line was the fact that many, many more patients were living longer with their disease. This was a double bonanza. More patients = more customers. More customers + higher prices per patient = Cha Ching!
A strange thing is happening in cancer drug pricing – collusion amongst the big pharma. When competition for drugs appear, generally prices should fall as those new competitors try to win market share. But drug companies figured out years ago that the more lucrative game was to pretend that drugs needed to be that expensive, and all drugs would benefit. Even as new competitors entered the arena, prices continued their one way climb into the stratosphere. Sprycel, a competitor to Gleevec was priced higher than the drug it was trying to replace. This exerted a strong pull on Gleevec’s price – upwards.
However, Big Pharma can’t very well charge those prices if they didn’t have a good reason. So, they claimed that development costs were similarly stratospheric and thus prices needed to be high to recoup the cost of developing these life saving drugs. Drug companies needed to make some profit. After all, we’re not communists. Of course, Gleevec was life saving, Sprycel is just a me-too drug. So the standard figure to develop a cancer drug was claimed to be $2.6 billion dollars. But careful analysis revealed that the prices were much, much lower. Analyzing 10 new cancer drugs, the actual cost of development was $757 million per drug. This included the costs of drugs that never made it out of the lab. The jig was up. It was simple collusion and price fixing.
But the main problem with these targeted genetic treatments is not high prices. The problem was that most cancers simply did not respond. Every drug company on the planet spends millions of dollars in an effort to find the next Gleevec. And over a decade later, we’re still waiting. We need to stop pretending that the cancer war can be won with more money. What we need is a new paradigm of understanding cancer.

Instead of new paradigms, we got some serious ‘more of the same’. According to a study published in the Journal of the American Medical Association (JAMA), 72 cancer treatments approved by the FDA between 2002 and 2014 extended life by an average of a pitiful 2.1 months.  2/3 of the drugs approved between 2014-2016 had no survival benefits at all! In other words, benefits are small, toxicity is high, and cost is higher still. No wonder we’re losing the war. Most of the FDA approvals for cancer medications were in pursuit of marginal indications. They weren’t particularly useful, but they were particularly profitable. That’s how you get a barely meaningful increase in survival for the tremendous expense. Once a drug is approved, the major part of the cost has been absorbed. Pursuing supplemental indications, no matter how marginal is supremely profitable because while patients only survive a little, they still pay full price!

The other great profit generator is the pursuit of Me-Too therapies, that add little in terms of making people healthy. They are basically copy cats of existing drugs that have almost identical chemical structures. While all the pharmaceuticals claim to be actively investigating new treatments for cancer, in truth, they’re all copying one another. Merck and Sanofi, for example spend almost 100% of their research budget trying to copy others. While competition seems like it would bring down prices, in truth, there is nothing more profitable than price fixing and collusion. As stated in the John Conley lecture in 2014, “the rapidly rising cost of cancer therapies, the regulations…, and the increasing economic risk of drug development have had the unintended consequence of stifling progress by diverting enormous amounts of time, money, and other resources toward therapeutic indications that are arguably marginal”. That’s how we got here in cancer therapy. Maximal cost, minimal benefits. That’s how we lose the war on cancer.