What is autophagy? The word derives from the Greek auto (self) and phagein (to eat). So the word literally means to eat oneself. Essentially, this is the body’s mechanism of getting rid of all the broken down, old cell machinery (organelles, proteins and cell membranes) when there’s no longer enough energy to sustain it. It is a regulated, orderly process to degrade and recycle cellular components.

There is a similar, better known process called apoptosis also known as programmed cell death. Cells, after a certain number of division, are programmed to die. While this may sound kind of macabre at first, realize that this process is essential in maintaining good health. For example, suppose you own a car. You love this car. You have great memories in it. You love to ride it.
But after a few years, it starts to look kind of beat up. After a few more, it’s not looking so great. The car is costing you thousands of dollars every year to maintain. It’s breaking down all the time. Is it better to keep it around when it’s nothing but a hunk of junk? Obviously not. So you get rid of it and buy a snazzy new car.
The same thing happens in the body. Cells become old and junky. It is better that they be programmed to die when their useful life is done. It sounds really cruel, but that’s life. That’s the process of apoptosis, where cells are pre-destined to die after a certain amount of time. It’s like leasing a car. After a certain amount of time, you get rid of the car, whether it’s still working or not. Then you get a new car. You don’t have to worry about it breaking down at the worst possible time.
The same process also happens at a sub-cellular level. You don’t necessarily need to replace the entire car. Sometimes, you just need to replace the battery, throw out the old one and get a new one. This also happens in the cells. Instead of killing off the entire cell (apoptosis), you only want to replace some cell parts. That is the process of autophagy, where sub-cellular organelles are destroyed and new ones are rebuilt to replace it. Old cell membranes, organelles and other cellular debris can be removed. This is done by sending it to the lysosome which is a specialized organelle containing enzymes to degrade proteins. 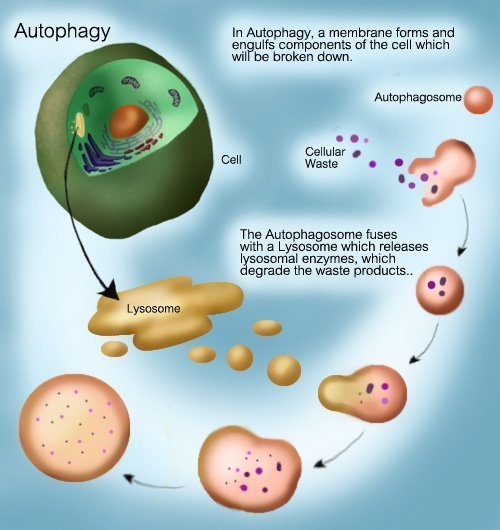 Autophagy was first described in 1962 when researchers noted an increase in the number of lysosomes (the part of the cell that destroys stuff) in rat liver cells after infusing glucagon. The Nobel prize winning scientist Christian de Duve coined the term autophagy. Damaged sub cellular parts and unused proteins become marked for destruction and then sent to the lysosomes to finish the job.
One of the key regulators of autophagy is the kinase called mammalian target of rapamycin (mTOR). When mTOR is activated, it suppresses autophagy, and when dormant, it promotes it.
Nutrient deprivation is the key activator of autophagy. Remember that glucagon is kind of the opposite hormone to insulin. It’s like the game we played as kids – ‘opposite day’. If insulin goes up, glucagon goes down. If insulin goes down, glucagon goes up. As we eat insulin goes up and glucagon goes down. When we don’t eat (fast) insulin goes down and glucagon goes up. This increase in glucagon stimulates the process of autophagy. In fact, fasting (raises glucagon) provides the greatest known boost to autophagy.
This is in essence a form of cellular cleansing. The body identifies old and substandard cellular equipment and marks it for destruction. It is the accumulation of all this junk that may be responsible for many of the effects of aging.
Fasting is actually far more beneficial than just stimulating autophagy. It does two good things. By stimulating autophagy, we are clearing out all our old, junky proteins and cellular parts. At the same time, fasting also stimulates growth hormone, which tells our body to start producing some new snazzy parts for the body. We are really giving our bodies the complete renovation.
You need to get rid of the old stuff before you can put in new stuff. Think about renovating your kitchen. If you have old, crappy 1970s style lime green cabinets sitting around, you need to junk them before putting in some new ones. So the process of destruction (removal) is just as important as the process of creation. If you simply tried to put in new cabinets without taking out the old ones, it would be pretty fugly. So fasting may actually reverse the entire aging process by getting rid of old cellular junk and replacing it with new parts.
Autophagy is a highly regulated process. If it runs amok, out of control, this would be detrimental, so it must be carefully controlled. In mammalian cells, total depletion of amino acids is a strong signal for autophagy, but the role of individual amino acids is more variable. However, the plasma amino acid levels vary only a little. Amino acid signals and growth factor/ insulin signals are thought to converge on the mTOR pathway – sometimes called the master regulator of nutrient signalling.
So, during autophagy, old junky cell components are broken down into the component amino acids (the building block of proteins). What happens to these amino acids? In the early stages of starvation, amino acid levels start to increase. It is thought that these amino acids derived from autophagy are delivered to the liver for gluconeogenesis. They can also be broken down into glucose through the tricarboxylic acid (TCA) cycle. The third potential fate of amino acids is to be incorporated into new proteins.
The consequences of accumulating old junky proteins all over the place can be seen in two main conditions – Alzheimer’s Disease (AD) and cancer. Alzheimer’s Disease involves the accumulation of abnormal protein – either amyloid beta or Tau protein which gums up the brain system. It would make sense that a process like autophagy that has the ability to clear out old protein could prevent the development of AD.
What turns off autophagy? Eating. Glucose, insulin (or decreased glucagon) and proteins all turn off this self-cleaning process. And it doesn’t take much. Even a small amount of amino acid (leucine) could stop autophagy cold. So this process of autophagy is unique to fasting – something not found in simple caloric restriction or dieting.
There is a balance here, of course. You get sick from too much autophagy as well as too little. Which gets us back to the natural cycle of life – feast and fast. Not constant dieting. This allows for cell growth during eating, and cellular cleansing during fasting – balance. Life is all about balance.