(Note – If you are a regular reader, you’ll know that I like to label my blogs according to topics – eg. there are 40-odd posts on fasting, 30-odd posts on diabetes, 50-odd posts on obesity/ calories. I do this because I blog about what interests me at the time and it can bounce around a little. This new section, covers mTOR, autophagy and mitochondrial disease, which you’ll see later, ties in very closely with the origins of cancer).
Throughout the recorded history of mankind, fasting has been a stalwart of traditional health and healing practices. This is true for virtually all regions of the earth and virtually all religions of the world. The roots of this ancient healing tradition may lie in the the sub-cellular cleansing process of autophagy, which is only just now being unravelled by science. Autophagy is one of the most evolutionarily conserved pathways known to exist, and can be seen in almost all multi-cellular organisms and many single celled organisms. Autophagy refers to the body’s response to a lack of food (fasting) which stimulates a degradation pathway of sub cellular components. 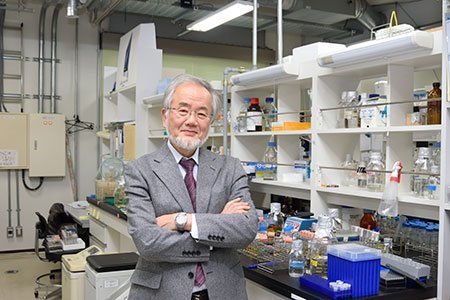 By digesting its own parts, the cell does two things. First it rids itself of unnecessary proteins that may be damaged or otherwise malfunctioning. Secondly, it recycles those amino acid ‘spare parts’ into new cellular components. This is one of the big misconceptions of the normal protein turnover – that these broken down proteins are somehow just flushed out of the body even if one is completely malnourished. This leads to the hysterical refrains that ‘Fasting burns muscle’. OMG. If you don’t eat 96 meals per day, you’ll shrivel up and die! Die! Your body stores food energy as fat, but as soon as you don’t eat, you burn muscle. You’ll die!
In truth, our bodies are nowhere nearly as stupid as that. Once these old proteins are degraded into component amino acids, our bodies decide whether these proteins are flushed out into the kidneys as waste products, or retained to make new proteins. Proteins are made up of building blocks called amino acids. It’s like Lego. You can break down your old weirdly shaped Lego plane and build a newer, better one using the same building blocks. This holds true in our bodies, too. We can break crappy old proteins down into the component amino acids and use them to rebuild newer more functional protein.
Yoshinori Ohsumi, the 2016 Nobel prize winner for Medicine for research into autophagy titled his Nobel Lecture “Autophagy – An Intracellular Recycling System” , not “Autophagy – How the Human Body flushes desperately needed protein down the toilet because Mother Nature is really, really stupid”. If you need protein, then your body will reclaim the broken down amino acids to make new protein.

Of course, if your body has more protein than necessary, then it may certainly excrete the excess amino acids or convert it to energy. While most people think growth is always good, the truth is that, in adults, growth is almost always bad. Cancer is too much growth. Alzheimer’s disease is the accumulation of too much junk protein (neurofibrillary tangles) in the brain. Heart attacks and strokes are caused by atheromatous plaques. These are excess accumulation of many things, but prominently, smooth muscle cells, connective tissues and degenerative materials. Yes. Too much growth of smooth muscle is instrumental in causing atherosclerosis that causes heart attacks. Polycystic diseases like kidneys and ovaries are too much growth. Obesity is too much growth.
Certain types of cellular stress, including nutrient deprivation, protein aggregation or unfolding (clumps of protein) or infections will activate autophagy to counteract these problems and keep the cell in good working order. This process was initially thought to be non-selective, but was later shown to be able to selective target damaged organelles (sub cellular components) and invading pathogens.  The process was described in mammals, but also in insects and yeast, where much of Dr. Ohsumi’s work was done unravelling autophagy related genes (ATG). He confirmed that this cleansing and recycling pathway was conserved throughout much of life on earth all the way from single celled organisms to humans.
Autophagy occurs at a low basal level in virtually all cells, being important in protein and organelle turnover. However, it may be up-regulated to generate nutrients and energy. That is, proteins may be burned for energy in the process of gluconeogenesis, if necessary. Nutrient status, hormones, temperature, oxidative stress, infection and protein aggregates may all affect autophagy in different ways.
The main regulator of autophagy is the target of rapamycin (TOR) kinase. This is also referred to as mammalian TOR (mTOR) or mechanistic TOR. When mTOR goes up, it shuts down autophagy. mTOR is exquisitely sensitive to dietary amino acids (protein). 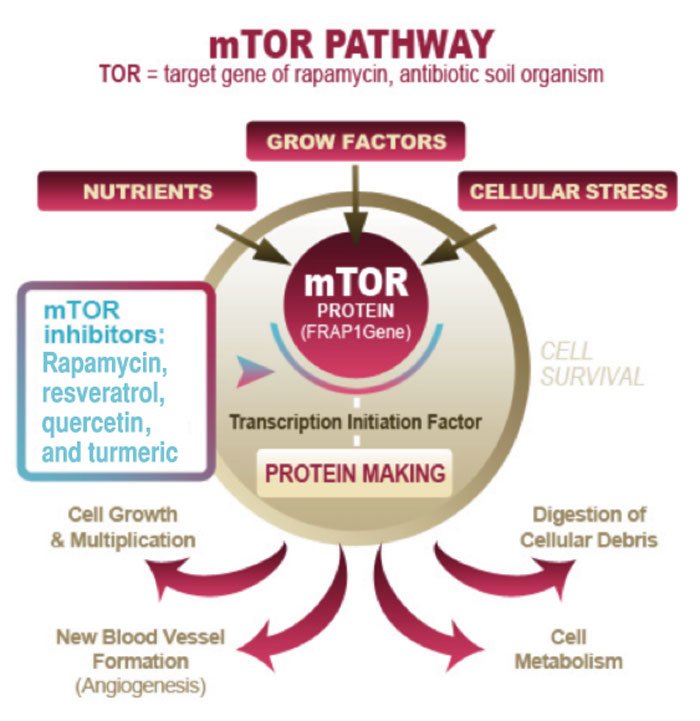 The other main regulator is 5′ AMP-activated protein kinase (AMPK). This is a sensor of intracellular energy, which is known as adenosine triphosphate or ATP. When the cell has a lot of energy stored up, it has a lot of ATP, which is a sort of energy currency. If you have lots of dollars, you are rich. If you have lots of ATP, your cell has lots of energy to do stuff.
AMPK detects the AMP/ATP ratio and when this ratio is high (low cellular energy levels), AMPK is activated. Low cellular energy = high AMPK so this is sort of a reverse fuel gauge of cellular energy status. When AMPK is high (low fuel), this shuts down fatty acid synthesis and activates autophagy. This makes sense. If your cells don’t have energy, it will not want to store energy (make fat), but instead will want to activate autophagy – getting rid of excess protein and possible burning it for energy.
Once autophagy is activated (decreased mTOR or increased AMPK), then 20 or so genes (ATG) are activated to carry out the cleaning process. These encode proteins that carry out the actual process. Since mTOR is a potent inhibitor of autophagy (mTOR acts like a brake on autophagy), blocking mTOR increases autophagy (ie. taking the foot off the brakes). You can do this by using the drug rapamycin, first used as an immune blocking agent in transplantation. This drug was discovered in 1972, isolated from a bacterium Streptomyces Hygroscopicus from Easter Island, also known as Rapa Nui (hence the name rapamycin). It was developed as an anti fungal but eventually found to have immune suppressing properties so gained use as an anti-rejection medication.
Almost all anti rejection drugs increase the risk of cancer. The immune system prowls around like security guards, day in and day out looking for errant cancer cells and killing them. They don’t call these cells Natural Killer cells for nothing, you know. If you knock out the security guards with potent anti-rejection medications, then cancer can spread like crazy. And that’s exactly what happens with most of these meds. 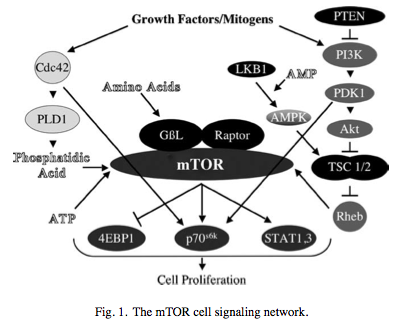 But not rapamycin. Interestingly, this drug decreased the risk of cancer. The mechanism of its action, by the time of its wide introduction in the 1990s was largely unknown. Eventually, using yeast models, the target of rapamycin (TOR) was identified, and the human counterpart was soon discovered – hence the name mammalian TOR, now given the catchy moniker – mTOR.
mTOR is found in virtually all multi-cellular organisms and indeed, many single celled organisms like yeast (where much of the research on autophagy is done). This protein is so important to survival that no organism alive functions without it. The technical term for this is ‘evolutionarily conserved’. What does it do? Simply put – it is a nutrient sensor.
One of the most important jobs for survival is to link the nutrients available in the environment and growth of the cell or organism. That is, if there is no food, then cells should stop growing and go into a dormant state (like yeast). If mammals sense there is no food, they also stop excessive growth of cells and start breaking some proteins down. If you didn’t do this, you didn’t survive.
mTOR integrates the signals between food (nutrient availability) and cell growth. If food available, then grow. If no food is available then stop growing. This is a vitally important task that underlies the entire spectrum of diseases of ‘too much growth’ that we talked about previously. It is similar to, but much older than another nutrient sensor we’ve talked a lot about – insulin.
But this knowledge opens up an entirely new therapeutic potential. If we have many diseases of ‘too much growth’ (cancer, atherosclerosis, obesity, polycystic ovaries), then we have a new target. If we can shut down the nutrient sensors, we can stop much of this growth that is making us sick. A new dawn breaks.