In our previous post (part 2), we took a quick overview of the physiology of fasting.  I’d like to take a more in-depth look at some of the studies that have been done to really try to understand what is actually happening when we fast. Today I want to focus in on human growth hormone (HGH).
HGH is a hormone made by the pituitary gland (the master gland). It plays a huge role in the normal development of children and adolescents as the name implies. However, it also plays a role in adults. HGH deficiency in adults typically leads to higher levels of body fat, lower lean body mass and decreased bone mass (osteopenia).
HGH only lasts a few minutes in the bloodstream.  It goes to the liver for metabolism, where it is converted into a number of other growth factors, the most important of which is Insulin Like Growth Factor 1 (IGF1).
Scientists first harvested HGH from cadavers in the 1950s (eeewww), but only synthesized it in labs in the early 1980s.  Soon afterwards, it became a popular performance enhancing drug. Normal levels of HGH peak in puberty (as you might expect) and gradually decrease thereafter.
Growth hormone is typically secreted during sleep and is one of the so-called counter-regulatory hormones.  HGH along with cortisol and adrenalin tell the body to increase the availability of glucose – so it counters the effect of insulin. High doses of HGH, (or cortisol) will produce higher blood sugars.  These hormones are typically secreted in a pulse just before waking (4 am or so) during the ‘counter-reulatory surge’.  Remember that all hormones exhibit pulsatile secretion to prevent the development of resistance as we covered in a previous post.
Since HGH typically goes down with age, there may be some benefit to giving HGH for its ‘anti-aging’ effects. Perhaps this decrease in HGH-IGF1 may contribute to the decrease in lean body mass both in lower muscle mass, but also lowered bone mass. So, what are the effects of giving HGH in older people?  This was studied in 1990 in a New England Journal of Medicine article. 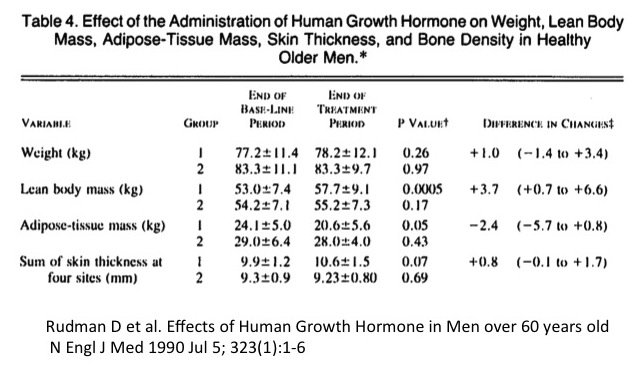 HGH is difficult to measure since it is pulsatile, so IGF1 can be measured as a surrogate. Healthy men with low IGF1 levels were given HGH for 6 months and the effects measured.
Group 1 is the HGH group and Group 2 is the control group that did not receive HGH.  Over 6 months weight overall did not change between the two groups.
But look at the lean body mass.  Compared to the control, the HGH group packed on 3.7 kg (8.8%) more lean mass.  That’s 8 pounds of lean mass!  Fat mass decreased an extra 2.4 kg (5.3 pounds)! Thats a decrease of 14.2%. Even the skin thickness improved.  That’s anti-aging, baby!
In a 2002 JAMA article, similar results were obtained in women as well.  There was a decrease in fat mass and an increase in lean mass.  Sounds pretty great.  So, why aren’t we using it for everybody?  Well, there’s a little thing called side effects.
There was an increase in blood sugars.  This makes sense, since HGH is a counter-regulatory hormone.  Pre-diabetes also significantly increased.  There was an increase in fluid retention as well as blood pressure, too.  Over the long term, there is also a theoretical risk of increased prostate cancer and heart problems (enlarged heart). So, that’s not very good news. 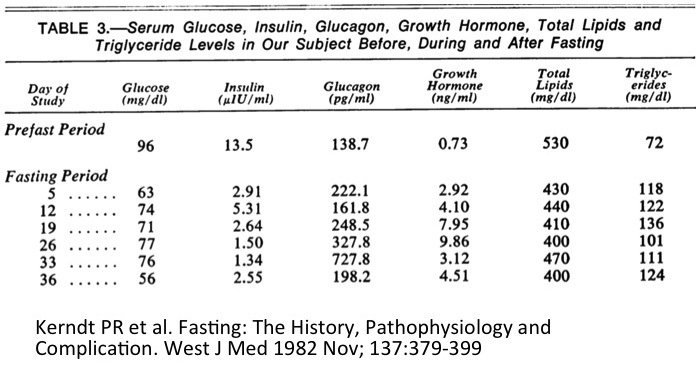 So artificial injections of HGH are out. What if there is an all-natural method of increasing growth hormone? What about, say, fasting?
In 1982, Kerndt et al published a study of a single patient who decided to undergo a 40 day fast for religious purposes.  They measure numerous metabolic indices over that forty days to see what happened.  There is a wealth of data here, but several notable things.  Blood pressure slightly decreased. Glucose goes down.  From 96 initially, it drops to 56.  Insulin goes way, way down.  Starting at 13.5, it quickly drops to 2.91 and stays down.  That is almost an 80% drop!
Glucagon goes from 139 to a peak of 727 or a 423% increase.
But our concern here is HGH.  It starts at 0.73 and peaks at 9.86.  That is a 1250% increase in growth hormone. Even with a relatively short 5 day fast, we are talking about 300% increase.  All this HGH increases without drugs. 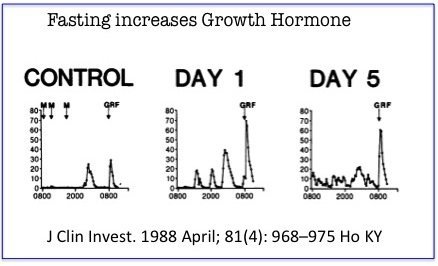 What about the potential side effects?  Increased glucose? Nope.  Increased blood pressure? Nope.  Higher risk of cancer? Nope.
Other studies have shown the same increase in growth hormone.  In 1988, Ho KY et al studied fasting and HGH. On the control day, you can see that meals (marked M) very effectively suppress HGH secretion.  This is to be expected.  Like cortisol, HGH increases glucose and thus is suppressed during feeding. Fasting is a great stimulus.
During fasting, there is the spike in the early morning, but there is regular secretion throughout the day as well. Hartman et al also showed a 5 fold increase in HGH in response to a 2 day fast.
This HGH is crucial in the maintenance of lean mass – both muscle and bone. One of the major concerns about fasting is the loss of lean mass.  This does not occur. In fact, the opposite happens – there is likely an increase in lean mass. Think about this for a second.
Let’s imagine that we are living in Paleolithic times.  During the summer of plenty, we eat lots of food and store some of that as fat on our body.  Now it is winter, and there is nothing to eat.  What do you suppose our body does.  Should we start burning our precious muscle while preserving our stored food (fat)?  Doesn’t that sound pretty idiotic?
It’s as if you store firewood for a wood-burning oven.  You pack lots of firewood away in your storage unit.  In fact, you have so much, it is spilling out all over your house and you don’t even have enough room for all the wood you’ve stored. But when the time comes to start up the oven, you immediately chop up your sofa and throw that into the oven.  Pretty stupid right?  Why would we assume our body is also so stupid?
The logical thing to do is to start burning the stored wood.  In the case of the body, we start to burn the stored food (fat stores) instead of burning precious muscle.
This has enormous implications for athletes. While studies are few, it is possible that the elevated HGH stimulated by fasting will increase muscle mass as seen in the earlier studies on HGH administration.  This would be an important advantage in elite level athletes, and we are seeing more and more interest in doing this exact sort of protocol.
The recovery from hard workouts would similarly be improved.  The increased adrenalin during fasting (to be discussed in future) will also allow you to perform a more intense workout.  It will make workouts easier and recovery faster.
It is not by accident that many of the early proponents of training in the fasted state are bodybuilders.  This is a sport that demands, in particular, high intensity training and extremely low body fat for definition.
For example, Brad Pilon, who wrote the fantastic book “Eat, Stop, Eat” is a bodybuilder, as is Martin Berkhan, who popularized the ‘lean gains’ method of fasting.  Somehow, I don’t think that fasting for these two fellows was ‘eating’ their muscle.
So, for all those people who thought that fasting would make you tired, or that you could not exercise during fasting, well, you’re just wrong. Fasting does not ‘burn’ muscle.  There is no ‘starvation’ mode from fasting where you shrivel up into the fetal position on your couch.
Rather, fasting has the potential to unleash the anti-aging properties of HGH without any of the problems of excessive HGH (prostate cancer, increased blood sugar, increased blood pressure).  For those interested in athletic performance, the benefits are even greater.
So, let’s see.  Train harder.  Lose Weight. Faster recovery. Decrease insulin and insulin resistance. Decrease sugars.  All of these benefits are achieved without drugs, supplements or cost.  Yes, like all the best things in life, it’s free. So why is everybody so against it?
Start here with Fasting part 1
Continue with Fasting part 4
Start here with Calories part 1
Watch the lecture – The Aetiology of Obesity 4/6 – The Fast Solution