Does fasting increase your hunger to unimaginable and uncontrollable dimensions? This is often how fasting is portrayed, but is it really true? From a purely practical standpoint, it is not. From my personal experience with hundreds of patients, one of the most consistent, yet surprising things reported is the reduction, not an augmentation of hunger. They often say things like, “I thought I would be consumed by hunger, but now I only eat 1/3 of what I used to, because I am full!” That’s great, because now you are working with your body’s hunger signalling to lose weight instead of constantly fighting it.
The number 1, most common misperception of fasting is it will leave us overwhelmed with hunger and therefore prone to severe overeating. Thus you get pronouncements from ‘experts’ like “Don’t even think about fasting, otherwise you will be so hungry that you will stuff your face full of Krispy Kreme donuts”. Funny enough, these ‘experts’ often have zero experience with fasting either personally or with clients. So why does it seem so reasonable?
Approximately 4-8 hours after we eat a meal, we start to feel hunger pangs and may become slightly cranky. Occasionally they are quite strong. So we imagine that fasting for a full 24 hours creates hunger sensations 5 times stronger – and that will be intolerable. But this is exactly what does NOT happen. Why?
Hunger is, in fact, a highly suggestible state. That is, we may not be hungry one second, but after smelling a steak and hearing the sizzle, we may become quite ravenous.  Hunger is also a learned phenomenon, as demonstrated by the classic experiments of Pavlov’s dogs – known in psychology as Pavlovian, or classical conditioning. 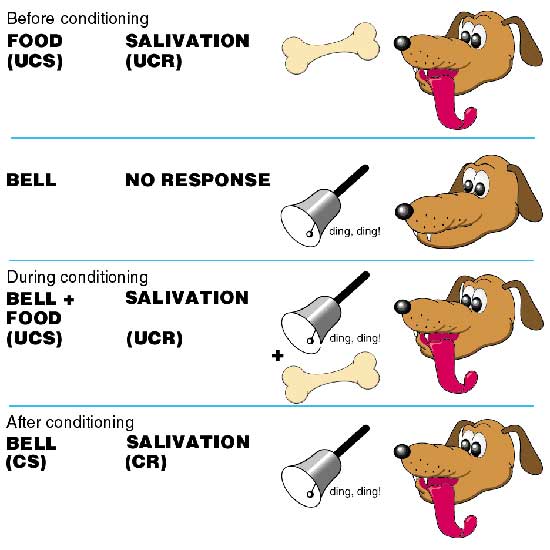 In the 1890s, Ivan Pavlov was studying salivation in dogs. Dogs will salivate when they see food and expect to eat (unconditioned stimulus – UCS) – that is, this reaction occurs naturally and without teaching. In his experiments, lab assistants would go in to feed the dogs and the dogs soon began to associate lab coats (conditioned stimulus -CS) with eating. There is nothing intrinsically appetizing about a man in a lab coat (yummy!), but the consistent association between the lab coat and food paired these two in the dog’s mind.
Very soon, the dogs began to salivate at the sight of the lab coats alone (having now been conditioned) even if food was not available. Ivan Pavlov, genius that he was, noticed this association and started to work with bells instead and before you know it, he was packing his bags to Stockholm to get his Nobel Prize and taste some of those oh-so-delicious Swedish meatballs. By pairing bells and food, the dogs began to anticipate food (salivate) at hearing bells alone without the food. This was the Conditioned Response
The applicability of this Psychology 101 lesson to hunger is obvious. That is, we can become hungry for many reasons – some of which are natural (smell and sizzle of steak) and others which have become conditioned into us. These conditioned responses can be very powerful and cause great hunger. If we consistently eat breakfast every single morning at 7:00, lunch at 12:00 and dinner at 6:00pm, then the time of day itself becomes a conditioned stimulus for eating. Even if we ate a huge meal at dinner the night before, and would not otherwise be hungry in the morning, we may become ‘hungry’ because it is 7:00. The Conditioned Stimulus (time of 7:00) causes the Conditioned Response (hunger).
Similarly, if we start to pair the act of watching a movie with delicious popcorn and sugary drinks, then the mere thought of a movie may make us hungry even though we have already eaten dinner and would normally not be hungry. The movie is the conditioned stimulus. Food companies, of course, spend billions of dollars trying to increase the number of CS that will make us hungry. The Conditioned Response is hunger – for popcorn, chips, hot dogs, sodas, etc.
Food at the ballgame! Food with movies! Food with TV! Food in between halves of kids soccer! Food while listening to a lecture! Food at the concerts! You can eat with a goat. You can eat on a boat. You can eat in a house. You can eat with a mouse. Conditioned responses, every one.
How to combat this? Well, intermittent fasting offers a unique solution. By randomly skipping meals and varying the intervals that we eat, we can break our current habit of feeding 3 times a day, come hell or high water. We no longer have a conditioned response of hunger every 3-5 hours. We would no longer become hungry simply because the time is 12:00. Instead, we would still get the unconditioned response of hunger, but not the conditioned one. That is, ‘you get hungry because you are hungry’, rather than ‘you get hungry because it’s noon’.
Similarly, by not eating throughout the entire day, we can break any associations between food and anything else – TV, movies, car rides, ball game etc. Here’s the solution. Eat only at the table. No eating at your computer station. No eating in the car. No eating on the couch. No eating in bed. No eating in the lecture hall. No eating at the ball game. No eating on the toilet. (OK, that last one is gross, but I’ve seen it!). 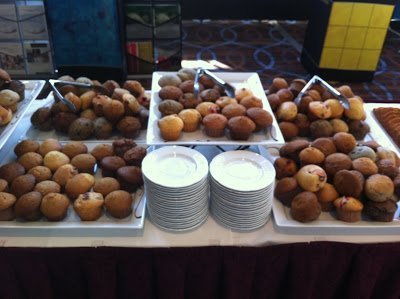 Our current Western food environment, of course, strives to do the opposite. There is a coffee shop or fast food restaurant on every corner. There are vending machines in every nook and cranny of every building in North America. In every conference, even at the Canadian Obesity Network, each break time is greeted by fattening muffins and cookies. Ironic and funny if not so heartbreaking. (Yes, we are doctors that treat obesity. Oh look, muffin! I’ll just eat it in the lecture hall even though I’m not really hungry!)
One key advantage of fasting is the ability to break all these conditioned responses. If you are not accustomed to eating every 4 hours, then you will not start salivating like Pavlov’s dog every 4 hours. If we are conditioned this way, no wonder we find it increasingly difficult to resist all the Mcdonald’s and Tim Horton’s stores while walking around. We are bombarded daily with images of food, references to food, and food stores themselves. The combination of their convenience and our ingrained Pavlovian response is deadly and fattening.
In breaking habits, you must understand that going cold turkey is not often successful. Instead, it is far better to replace one habit with another, less harmful habit. For example, suppose you have a habit to munch while watching TV – chips or popcorn or nuts. Simply quitting will make you feel that something is ‘missing’. Instead, replace that habit of snacking with a habit of drinking a cup of herbal or green tea. Yes, you will find this weird at first, but you will feel a lot less like something is ‘missing’. So, during fasting, you may, instead of completely skipping lunch, drink a large cup of coffee. Same at breakfast. Or perhaps replace dinner with a bowl of homemade bone broth. It will be easier in the long run. This is, of course, the same reason that people who want to quit smoking often chew gum.
Social influence can also play a large role in eating. When we get together with friends, it is often over a meal, over coffee, or some such dietary event. This is normal, natural and part of human culture worldwide. Trying to fight it is clearly not a winning strategy. Avoiding social situations is not healthy either.
So what to do? Simple. Don’t try to fight it. Fit the fasting into your schedule. If you know you are going to eat a large dinner, then skip breakfast and lunch. One of the easiest ways to fit fasting into your life is to skip breakfast, since that meal is very uncommonly taken with others and, during working days is easy to skip without anybody noticing. This will quite easily allow you to fast for 16 hours (16:8 protocol). Also, unless you go out to lunch every day with the same crowd, lunch is also quite easy to miss without anybody noticing during the work day. This allows you to ‘slip in’ a 24 hour fast without any special effort.

So, in essence, there are two major components to hunger. The unconditioned biological stimuli – that is, the part that will normally stimulate hunger naturally (smells, sights, and tastes of food) and the conditioned stimuli (learned – movie, lecture, ball game). These CS do not naturally stimulate hunger, but through consistent association, have become almost as powerful. That is, the movie, the TV, the sight of McDonalds, the sound of a jingle etc. They have become hopelessly intertwined but they are by no means irreversibly so. Simply change out the response (drink green tea instead of eat popcorn). Fasting helps to break all the conditioned stimuli, and thus helps to reduce, not enhance hunger. Hunger is not so simple as your stomach being ’empty’.
So – here’s the real question – does fasting lead to over-eating? This was answered in a study published in 2002. 24 healthy subjects underwent a 36 hour fast and then caloric intake was measured. At baseline, subjects ate 2,436 calories per day. After a 36 hour fast, there was an increase in caloric intake to 2914 calories. So there was a degree of over-eating – almost 20%. However, over the 2 day period, there was still a net deficit of 1,958 calories over 2 days. So the amount ‘over’ eaten did not nearly compensate for the period of time fasting. They conclude the “a 36 hr fast..did not induce a powerful, unconditioned stimulus to compensate on the subsequent day.”
Here’s the ‘spare me the details’ bottom line – NO, fasting does not lead to overeating. No, You will NOT be overwhelmed with hunger.
Start here with Fasting part 1
Continue to Fasting Part 18 – Cephalic Phase Response