How does fasting affect brain function? There is very little reliable human data, but some very interesting animal data, as recently reviewed. There are many potential benefits. While I tend to focus on weight loss and type 2 diabetes, there are many other benefits, including autophagy (a cellular cleansing process), lipolysis (fat burning), anti aging effects and anti-seizure effects. 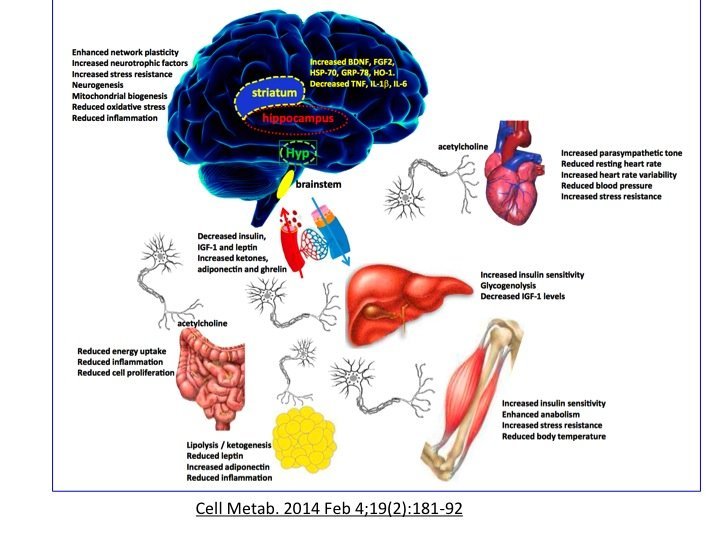 From an evolutionary standpoint, we can look at other mammals for some clues. In many mammals, the body responds to severe caloric deprivation with a reduction in the size of all organs with two prominent exceptions – the brain and the male testicles. This suggests that cognitive function is highly preserved.
This makes quite a lot of sense from an evolutionary standpoint. Suppose you had some trouble finding food. If your brain started to slow down, well, the mental fog would make it that much harder to find food. Our brainpower, one of the main advantages we have in the natural world, would be squandered. No, the brain maintains or even boosts its abilities. In stories of Japanese prisoners of war in World War II (Unbroken by Laura Hillenbrand), many have described the amazing clarity of thought that often accompanies starvation.
The preservation of the size of the testicles is also a significant advantage in trying to pass on our genes to the next generation.
In all mammals, one of the highly preserved behavioural traits is that mental activity increases when hungry and decreases with satiation. Of course, we have all experienced this. Sometimes this is called ‘food coma’. Think about that large Thanksgiving turkey and pumpkin pie. After that huge meal, are we mentally sharp as a tack? or dull as a concrete block? How about he opposite? Think about a time that you were really hungry. Were you tired and slothful? I doubt it. Your senses were probably hyper-alert and you were mentally sharp as a needle. That is to say that there is likely a large survival advantage to animals that are cognitively sharp, as well as physically agile during times of food scarcity. 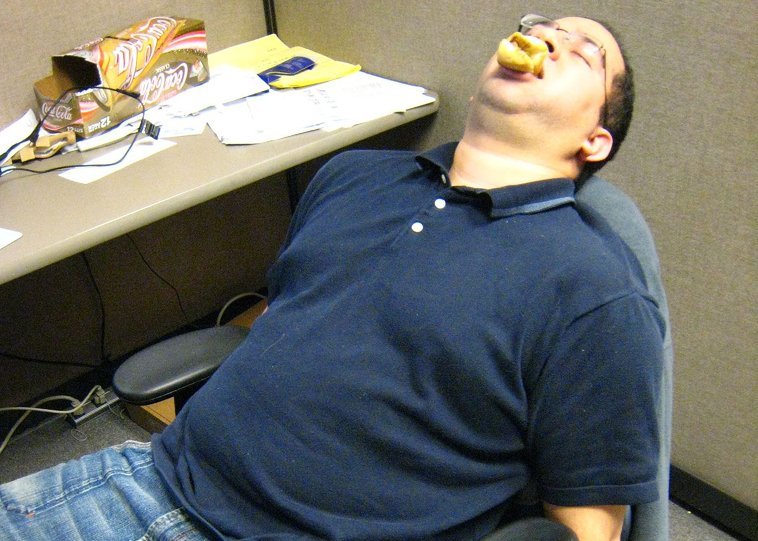 Studies have also proven that mental acuity does not decrease with fasting. One study compared cognitive tasks at baseline and after a 24 hour fast. None of the tasks – including sustained attention, attentional focus, simple reaction time or immediate memory were found to be impaired. Another double-blinded study of a 2-day ‘almost total’ caloric deprivation found no detrimental effect even after repeatedly testing cognitive performance, activity, sleep and mood.
What we say we are ‘hungry’ for something (hungry for power, hungry for attention), does it mean we are slothful and dull? No, it means that we are hyper-vigilant and energetic. So, fasting and hunger clearly activate us towards our goal. People always worry that fasting will dull their senses, but in fact, it has the opposite, energizing effect.
These sorts of tests are easy to see in animal studies. Aging rats were started on intermittent fasting regimens are markedly improved their scores of motor coordination and cognitive tests. Learning and memory scores also improved after IF. Interestingly, there was increased brain connectivity and new neuron growth from stem cells. This is believed to be mediated in part by BDNF (Brain Derived Neurotrophic Factor). In animal models, both exercise and fasting significantly increase BDNF expression in several parts of the brain. BDNF signaling also plays a role in appetite, activity, glucose metabolism and autonomic control of the cardiovascular and gastrointestinal systems. 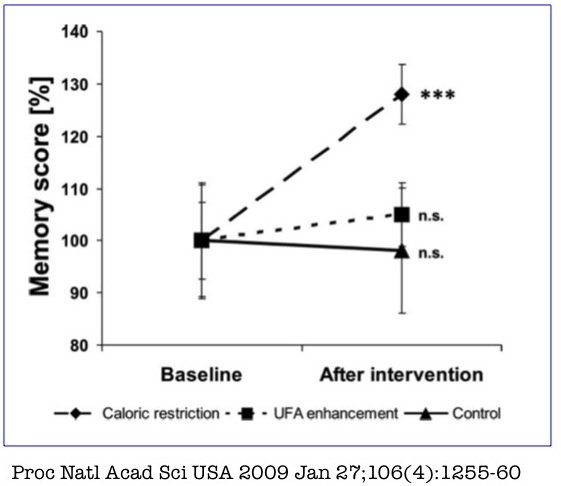 There are also very interesting mouse models of neuro-degenerative diseases. Mice maintained on IF, compared to normal mice, showed less age related deterioration of neurons and less symptoms in models of Alzheimers disease, Parksinon’s and Huntington’s disease.
In humans, the benefits to the brain can be found both during fasting and during caloric restriction (CR). During exercise and CR, there is increased synaptic and electrical activity in the brain. In a study of 50 normal elderly subjects, memory test improved significantly with a 3 months of CR (30% reduction in calories).
Neurogenesis is the process where neural stem cells differentiate into neurons that are able to grow and form synapses with other neurons. Both exercise and CR seem to increase neurogenesis via pathways including BDNF. 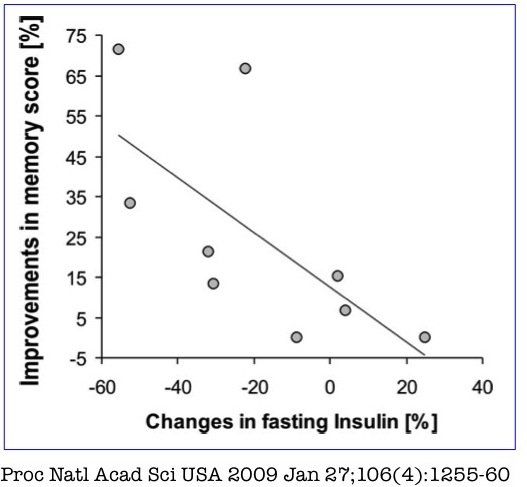 Even more interestingly, the level of fasting insulin seems to have a direct inverse correlation to memory as well. That is, the lower you are able to drive down fasting insulin, the more improvement on memory score that is seen.
Increased body fat (as measured by BMI) has also been linked to decline in mental abilities. Using detailed measurements of blood flow to the brain, researchers linked a higher BMI to decreased blood flow to those areas of the brain involved in attention, reasoning, and higher function.
Intermittent fasting provides one method of decreasing insulin, while also decreasing caloric intake.
Alzheimer’s disease (AD) is characterized by the abnormal accumulation of proteins. There are 2 main classes – amyloid plaques and neurofibrillary tangles (tau protein). The symptoms of AD correlate closely with the accumulation of these plaques and tangles. It is believed that these abnormal proteins destroy the synaptic connections in the memory and cognition areas of the brain.
Certain proteins (HSP-70) act to prevent damage and misfolding of the tau and amyloid proteins.  In mouse models, alternate daily fasting increased the levels of HSP-70. Autophagy removes these tau and amyloid protein when they are damaged beyond repair. This process, too, is stimulated by fasting. 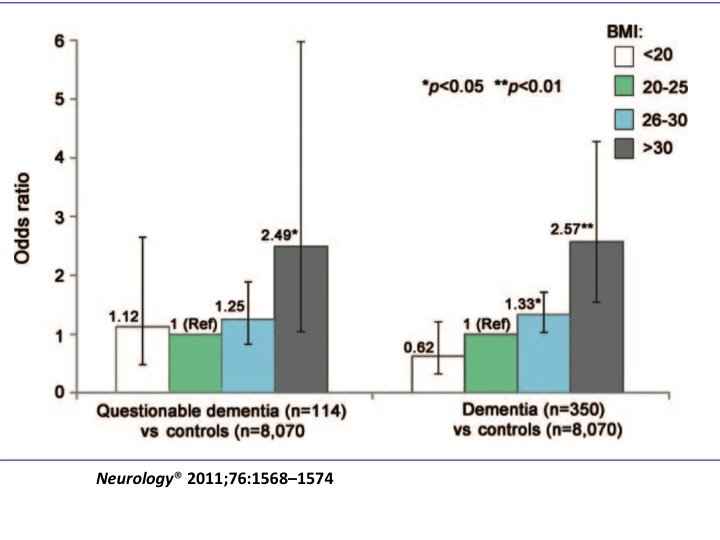 There is substantial evidence that risk of AD is related to obesity. A recent population based twin study demonstrated that weight gain in middle age predisposes to AD.
Taken together, this suggests a fascinating possibility in the prevention of Alzheimer’s disease. Over 5 million American have AD and this number will likely increase rapidly due to the aging population. AD creates significant burdens upon families that are forced to care for their afflicted members.
Certainly fasting may have significant benefits in reducing weight, type 2 diabetes along with its complications – eye damage, kidney disease, nerve damage, heart attacks, strokes, cancer. However, the possibility also exists that it may prevent the development of Alzheimer’s disease as well.
The method of protection may also have to do with autophagy – a cellular self cleansing process that may help removed damaged proteins from the body and brain. Since AD may result from the abnormal accumulation of Tau protein or amyloid protein, fasting may provide a unique opportunity to rid the body of these abnormal proteins. We will cover autophagy next week.