While many consider Type 2 Diabetes (T2D) irreversible, fasting has also been long known to cure diabetes. In our previous post, we considered bariatric surgery. While extreme, these surgeries have proven the point that the metabolic abnormalities that underlie T2D (hyper insulinemia, insulin resistance) can often be fully reversed after a short (weeks) period of intensive treatment with bariatrics. Many early studies were done with the heavy-duty Roux-en-Y surgery, which is the heavyweight champions of surgeries. The best weight loss. The most complications. This is the surgery that has ‘Go Big or Go Home’ tattooed on its massive bicep. 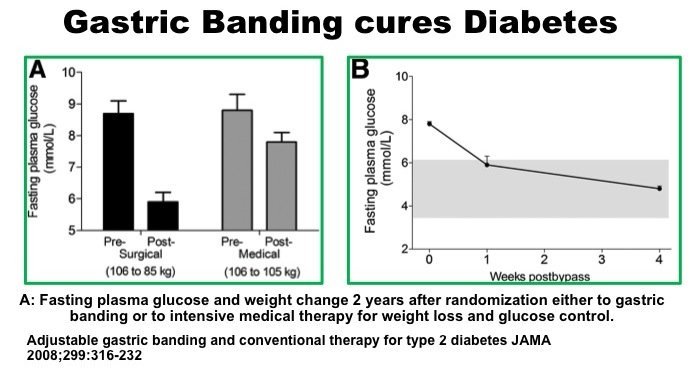 But even milder forms of bariatric surgery show the same reversibility of T2D. A gastric band is essentially a belt implanted around your stomach.
They keep tightening the belt so that you can’t eat. If you try to eat too much, you’ll puke it all back up. Loverly. It ain’t pretty, but it sure do work. Again, long term results are kind of iffy, but short term results are pretty good.
You can see the results of gastric banding versus medical treatment from the graph above. Patients randomized to the gastric band showed a significant and pretty damn good drop in their fasting blood sugars. In other words, T2D was reversing in a b-i-g way. Those given medicines alone didn’t do very well at all. Basically they stayed the same. They were no better than before.
So, yes, even gastric banding these 500 pound patients with 20 years of diabesity can reverse within weeks even before the weight comes off. One of the main questions is why? There are many hypotheses – which we will consider in a later post, but it is the sudden severe restriction of all calories that causes this beneficial effect. This is the same thing as the time tested, ancient healing tradition of fasting. Fasting is the voluntary restriction of food for religious, health or other purposes (eg. hunger strikes). Is bariatrics simply a surgically enforced fast? The short answer is yes. 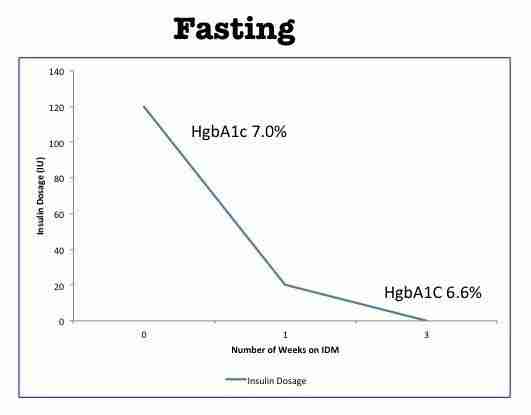 The diabetes ‘specialists’ all consider T2D to be a chronic and progressive disease. However, both bariatrics and fasting proves them wrong. Consider this real life example from my practice. A lady in her mid 60’s was referred to me on 120 units of insulin daily along with 2 grams/day of metformin (a type of medication used for T2D). She had T2D for 27 years and had been progressively using higher and higher doses of insulin in an effort to control her blood sugars. However, things were getting worse. So that’s why she was referred to us in the Intensive Dietary Management Program.
We started her on a regimen that included fasting under strict medical supervision. We started with a full week of fasting and immediately reduced her medications. When she was feeling well, she continued for a second week, then a third. By that time she was off her insulin. It’s been over a year now, and she continues to be off all insulin and medications with a HgbA1C of 5.9%. Technically, she is no longer diabetic (defined by an A1C of less than 6%). 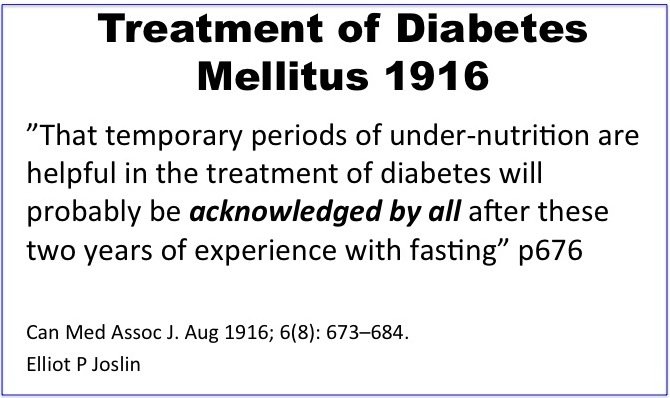 She feels terrific – with more energy now than she has had for over a decade. Her husband was so impressed that he also started our program and has recently come off all his insulin, too.
But wait! The diabetes ‘experts’ insist that T2D was a chronic and progressive disease! How can this lady, with her 27 year history of T2D, suddenly reverse all her disease and become non-diabetic? How can this possibly happen?
The answer is quite simple. Logically, there was simply no truth to the statement that T2D is chronic and progressive. It was only a lie. The ‘experts’ were being economical with the truth. Spinning a yarn. Pulling a ‘Bill Clinton’.
But the fact that fasting cures diabetes has been know for close to 100 years! One of the most famous diabetologists in the history of the world – Dr. Elliot Joslin wrote about it in the Canadian Medical Association Journal in 1916! In fact, he thought that it was so obvious that fasting was helpful that studies would not even be necessary. This, from the guy that Harvard University used to name its world famous Joslin Center for Diabetes.
What happened? Well, remember that there was still massive confusion about Type 1 and Type 2 diabetes back then. Fasting would not be particularly useful for Type 1, and type 2 was still quite unusual back then. After the discovery of insulin in the early 1920’s, all the focus turned to it as the ‘cure’ for diabetes. While it was a major advance for type 1, it was not quite the panacea for type 2s. However, most of the interest in fasting disappeared as doctors focused on what would be their mantra for the next century – drugs, drugs, drugs. 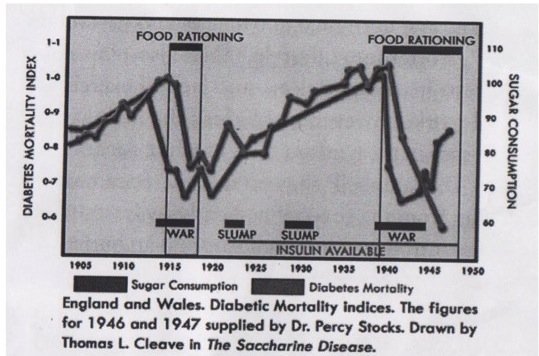 The effect of wartime starvation on T2D was also obvious. During both world wars, the mortality from diabetes dropped precipitously. In the interwar period, as people went back to their accustomed eating habits, it went back up. This, of course is quite easy to understand. Since T2D is essentially a disease of excessive sugar in the body, reducing intake of sugars and carbohydrates should cause less disease.
Returning to the point that bariatrics is simply a surgically enforced fast, you can directly compare the effects of fasting and bariatrics. In a fascinating study, patients who were waiting to undergo bariatric procedures were given a period of fasting beforehand. The reasoning was quite simple. Many of these morbidly obese patients had enormous fatty livers. If you could somehow reduce this fatty liver and reduce their weight somewhat, the risk of surgical complications would be reduced.
The reduction in liver size would make working in the abdominal cavity much easier, with better vision. Since many of these procedures are done laparascopically, being able to see better is a huge benefit. Also, with less abdominal distention, abdominal wound healing was significantly improved. Therefore, it was decided to try a period of fasting for these patients before getting their actual surgery.
In the meantime, you could compare both sugar control and weight loss during the fasting period and also during the post surgical period. Since bariatrics is considered the heavy weight champ, this was a real David vs Goliath battle (Fasting vs Surgery).
On the graph below, you can see the results. In the first graph, fasting caused 7.3 kg weight loss compared to only 4kg for surgery. The second graph shows the overall ‘glycemia’ or the total amount of sugar in the blood over the day. During fasting, there was far less sugar in the blood (1293 vs 1478). On both counts you can see that the fasting was actually significantly better than the surgery! Blood sugars came down faster, as did weight. David (fasting) did not simply beat Goliath (bariatrics), he beat him like a rented mule. 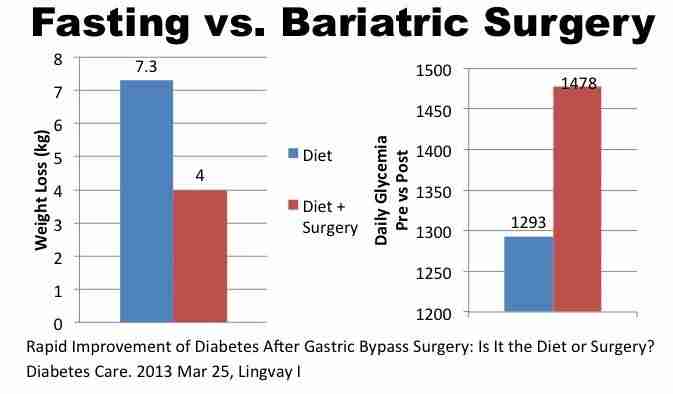 If all the benefits of bariatric surgery accrue because of fasting, why not simply do the fasting and skip the surgery? The standard answer is that people cannot do the fasting without the surgical enforcement. But have they ever tried? How do you know that you cannot fast for an extended period of time if you have never tried it? Shouldn’t you at least give it a shot before giving up?
But my main point is again, not to criticize or praise surgery. Rather my point is this. Fasting cures diabetes. Rather than the chronic and progressive disease that we have been promised, instead T2D turns out to be a treatable and reversible condition. Both practices of fasting and bariatric surgery prove the point. This is a curable disease. Type 2 diabetes is entirely reversible. This changes everything. A New Hope arises.
Start here with My Journey
Continue to T2D part 5 “Treatments that Cure”
See lecture “The Two Big Lies of Type 2 Diabetes”