Many myths are associated with fasting. These myths have been repeated so often that they are often perceived as infallible truths.  Some of the these myths include:

Long ago disproven, nevertheless these myths still persist. If they were true, none of us would be alive today. Consider the consequences of burning muscle for energy. During long winters, there were many days where no food was available. After the first episode, you would be severely weakened.   After several repeated episodes, you would be so weak that you would be unable to get hunt or gather food. Humans would never have survived as a species. The better question would be why the human body would store energy as fat if it planned to burn protein instead. The answer, of course, is that is does not burn muscle as we discussed in the previous post. It was only a myth.
There is another persistent myth that brain cells require glucose for proper functioning. This is incorrect. Human brains, unique amongst animals, can use ketones as a major fuel source during prolonged starvation, allowing the conservation of protein such as skeletal muscle. Again, consider the consequences if glucose were absolutely necessary for survival. Humans would not survive as a species. After 24 hours, glucose becomes depleted and we become blubbering idiots as our brains shut down. Our intellect, our only advantage against wild animals, begins to disappear. Humans would have soon become extinct. Fat is simply the body’s way of storing food energy for the long term, and glucose/ glycogen is the short-term solution. When short-term stores are depleted, the body turns to its long-term stores without problems.
Consider an analogy. A freezer stores food in the long term, and a refrigerator used for short-term storage. Suppose that three times a day, everyday, we go to the market to buy food. Some goes into the refrigerator, but the excess goes into the freezer. Soon one freezer is not enough, so we buy another, then another. Over a period of decades, we have ten freezers, and nowhere else to put them. Food in the freezer does not get eaten because three times a day, we still buy more food. There is simply no reason to release the food from the freezer. What would happen if, one day, we decide not to buy food? Would everything shut down in ‘starvation mode’? Nothing could be further from the truth. We would first empty the refrigerator. Then the food, so carefully stored in the freezer would be released. 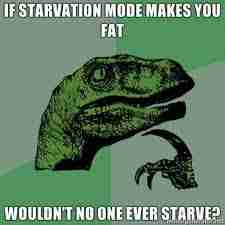 So, in the body’s case, glucose is used for short-term energy and fat for long-term storage (the freezer). Fat is not burned when plenty of glucose is available. Over decades of abundant glucose, fat stores proliferate. What would happen if glucose were suddenly unavailable? Would everything shut down in ‘starvation mode’? Nothing could be further from the truth. Energy, so carefully stored as fat, would be released.
Starvation mode, as it is popularly known, is the mysterious boogieman always raised to scare us away from missing even a single meal. Over one year, approximately 1000 meals are consumed. Over a span of 60 years, this equals 60,000 meals. To think that skipping 3 meals of the 60,000 will somehow cause irreparable harm is simply absurd. Breakdown of muscle tissue happens at extremely low levels of body fat – approximately 4%. This is not something most people need to worry about. At this point, there is no further body fat to be mobilized for energy and lean tissue is consumed. The human body has evolved to survive episodic periods of starvation. Fat is stored energy and muscle is functional tissue. Fat is burned first. This is akin to storing a huge amount of firewood but deciding to burn your sofa instead. It’s stupid. Why would we assume the human body is so stupid? The body preserves muscle mass until the body fat becomes so low that it has no choice.
Studies of alternate daily fasting, for example show that the concern over muscle loss is largely misplaced. Alternate daily fasting over 70 days decreased body weight by 6%, but fat mass decreased by 11.4%. Lean mass (including muscle and bone) did not change at all. Significant improvements were seen in LDL cholesterol and triglyceride levels. Growth hormone increases to maintain muscle mass. Studies of eating a single meal per day found significantly more fat loss despite the same caloric intake. Importantly, no evidence of muscle loss was found.
The other persistent myth of ‘starvation mode’ is that basal metabolism decreases severely and our bodies ‘shut down’. This too is highly disadvantageous to survival of the human species. If, after a single day of fasting, metabolism decreased, then we would have less energy to hunt or gather food. With less energy, we are less likely to get food. So, another day passes, and we are even weaker, making us even less likely to get food. This is a vicious cycle that the human species would not have survived. It’s stupid. Why would we assume the human body is so stupid? There are, in fact, no species of animals, humans included that are evolved to require three meals a day, everyday. We have already seen in a previous post that resting energy expenditure (REE) goes UP, not down during fasting. Metabolism revs up; it does not shut down.
It’s unclear to me where this myth originated. Daily caloric restriction leads to decreased metabolism so people assumed that this would simply be magnified as food intake dropped to zero. This is wrong. If you rely on food for energy, then decreasing food will lead to decreased energy intake, which will be matched by decreased energy expenditure. However, as food intake goes to zero, the body switches energy inputs from food to stored food (fat). This significantly increases the availability of ‘food’ and this is matched by an increase in energy expenditure.
So what happened in the Minnesota Starvation Experiment? These participants were not fasting. They were eating a reduced calorie diet. The hormonal adaptations to fasting were not allowed to happen. In response to a prolonged period of lowered food intake, the body makes the adjustment to lower TEE.
Everything changes when food intake goes to zero (fasting).  The body obviously cannot take TEE down to zero.  Instead, the body now switches to burning the fat stored on our bodies.  After all, that is precisely, exactly what it was put there for.  Our body fat is used for food when no food is available.  It’s not put there for looks.
Detailed physiologic measurements show that TEE is maintained or sometimes even increased over the duration of a fast. Alternate daily fasting over 22 days found no measurable decrease in TEE. There was no ‘starvation’ mode. There was no decreased metabolism. Fat oxidation increased 58% while carbohydrate oxidation decreased from 53%.   This means that the body has started to switch over from burning sugar to burning fat with no overall drop in energy. Four days of fasting actually increase TEE by 12%. Norepinephrine levels (adrenalin) absolutely skyrocketed 117% to maintain energy. Fatty acids increased over 370% as the body switched to burning fat. Insulin measurements decreased 17%. Blood glucose levels dropped slightly but remained in the normal range.
All the incredibly beneficial adaptations to fasting are not allowed to happen in a low calorie diet.
In fact, look how quickly the merest touch of glucose reverses the hormonal changes of fasting. Only 7.5 grams of glucose (2 teaspoons of sugar or barely a sip of a soft drink) is enough to reverse the ketosis. Almost immediately after consuming glucose, the ketones beta hydroxybutyrate and acetoacetate drop to almost nothing, as does fatty acids. Insulin rises, as does glucose.
What does this mean? The body stops burning fat. It has now returned to burning the sugar that you are eating. 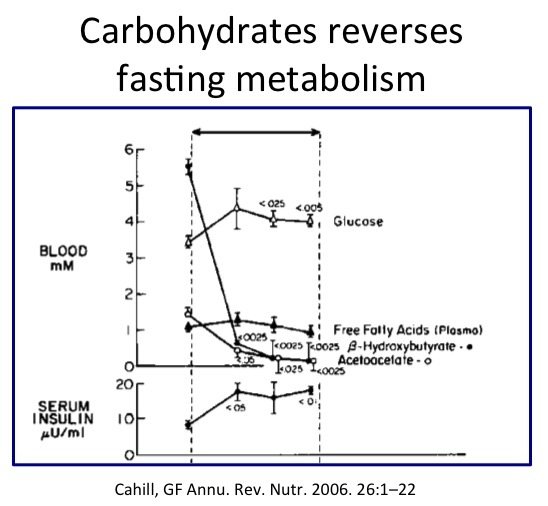 Repeated concerns are raised that fasting may provoke overeating. Studies of caloric intake do show a slight increase at the next meal. After a one day fast, average caloric intake increases from 2436 to 2914. But over the entire 2-day period, there is still a net deficit of 1958 calories. The increased calories did not nearly make up for the lack of calories on the fasting day. Personal experience in our clinic shows that appetite tends to decrease with increased duration of fasting.
Does fasting deprive the body of nutrients? Most people have more than ample quantities of nutrients. That’s the whole point. To get rid of some of these nutrients – also known as fat.
If you are worried about micronutrients and minerals – you can always take a general multi-vitamin. A different regimen such as alternate daily fasting (ADF) can also alleviate concerns about nutrient deficiency.
The science is clear. The myths surrounding fasting were only falsehoods.
Start here with Calories I
Start here with Fasting I
Continue with Fasting part 6
Watch the lecture – The Aetiology of Obesity 4/6 – The Fast Solution