There are many different fasting regimens. Let’s be very clear to start, though. There is simply no ‘best’ one. They all work to different degrees for different people. Just as some people prefer steak to chicken, there is no right or wrong answer. One regimen will work for one person but be utterly ineffective in the next.
Fasting is defined as the voluntary act of withholding food for a specific period of time. Non-caloric drinks such as water and tea are permitted. An absolute fast refers to the withholding of both food and drink. This may be done for religious purposes, such as during Ramadan in the Muslim tradition, but is not generally recommended for health purposes because of the accompanying dehydration. In our IDM program, we do not ever use the absolute fast.
Fasting has no standard duration. Fasts can range from twelve hours to three months or more. You can fast once a week or once a month or once a year. Intermittent fasting involves fasting for shorter periods of time on a regular basis. Shorter fasts are generally done more frequently. Longer fasts are typically twenty-four to thirty-six hours, done two to three times per week. Prolonged fasting may range from one week to one month.
I categorized fasting periods with a break point at 24 hours, although this is somewhat arbitrary. In my experience in the IDM program, I generally use shorter regimens for those who are mostly interested in losing weight without much in the way of type 2 diabetes, fatty liver or other metabolic diseases.
For those who have more significant illnesses, I use longer duration regimens as they tend to give faster results. After the initial ‘breaking’ in period, we always work with the patients to find out what they prefer to do. A surprising number of patients prefer longer duration fasts less frequently. 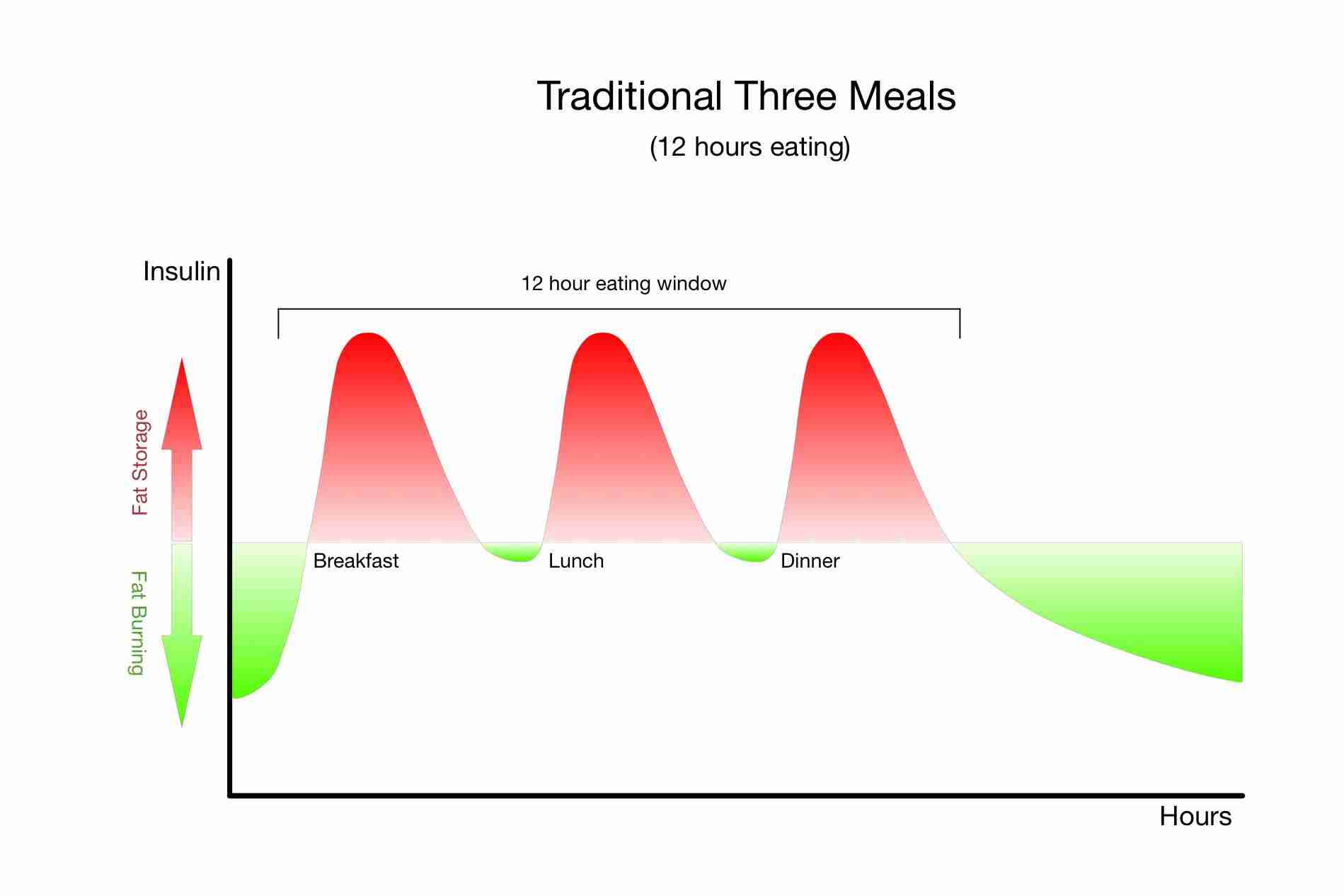 At that point, you would ‘break your fast’ with a small breakfast. This was pretty standard in the 1950s and 1960s. There wasn’t much obesity back then. However, there were two major changes that happened since then. First was the change to a higher carbohydrate, lower fat diet. This tended to increase insulin. Second was the increase in meal frequency, as we detail in a previous post, which tended to reduce fasting periods.
If you could eat unprocessed foods, avoid excessive added sugars, and did not have significant insulin resistance to start, this 12 hr daily fasting was probably good enough for most people to avoid obesity. However, it is not really strong enough to reverse decades of insulin resistance.
2. 16 hour fasting – This regimen involves using a daily 16 hour period of fasting and an 8 hour ‘eating window’. For example, this would mean eating from 11 am – 7 pm, and fasting from 7 pm to 11am. This generally means skipping the morning meal every day. Some people choose to eat 2 meals during that 8 hour window and others will eat 3.
This regimen was popularized by a bodybuilder by the name of Martin Berkhan who blogged about it on his website www.leangains.com, and so the method is sometimes called the LeanGains method. He wrote extensively in the years 2007-2010 but I don’t see much activity on his blog anymore, which is a real shame, because he had some great ideas and original thought. There are still some excellent posts there.
He wrote extensively about training in the fasted state and eating predominantly in the post-workout period. These ideas are supported by the science available (albeit not a lot). However, they do make a lot of common sense. 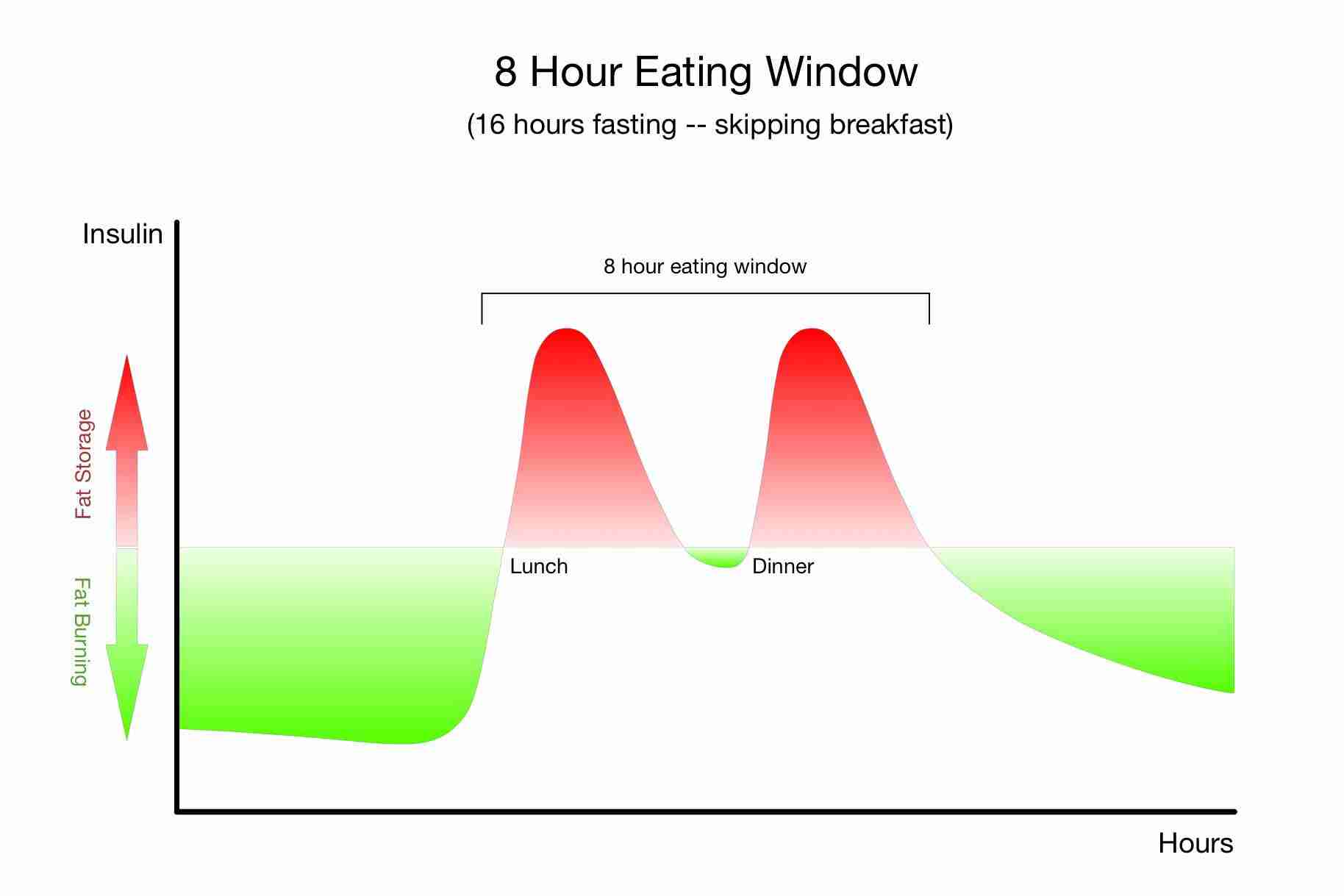 Several years later, an editor at Men’s Health wrote a book called The 8 hour diet, which essentially used the same 8 hour eating window as the LeanGains method. In his entire book, he strenuously avoided any mention of LeanGains or Berkhans, even though this method transparently ripped-off LeanGains. You can’t really patent a time period of fasting, but the intellectual dishonestly was appalling, regardless. It is like writing about E=MC2 and never mentioning Albert Einstein, but instead pretending to have ‘discovered’ it yourself.
3. The ‘Warrior’ diet – This was one of the first diets to popularize intermittent fasting regimens. Written by Ori Hofmekler in 2002, this diet stressed that timing of meals mattered almost as much as composition of meals. In other words, ‘when you eat makes what you eat important’. Actually, I think both are important, but the ‘when’ question is seriously under-appreciated, and this book was one of the first to really point this out. 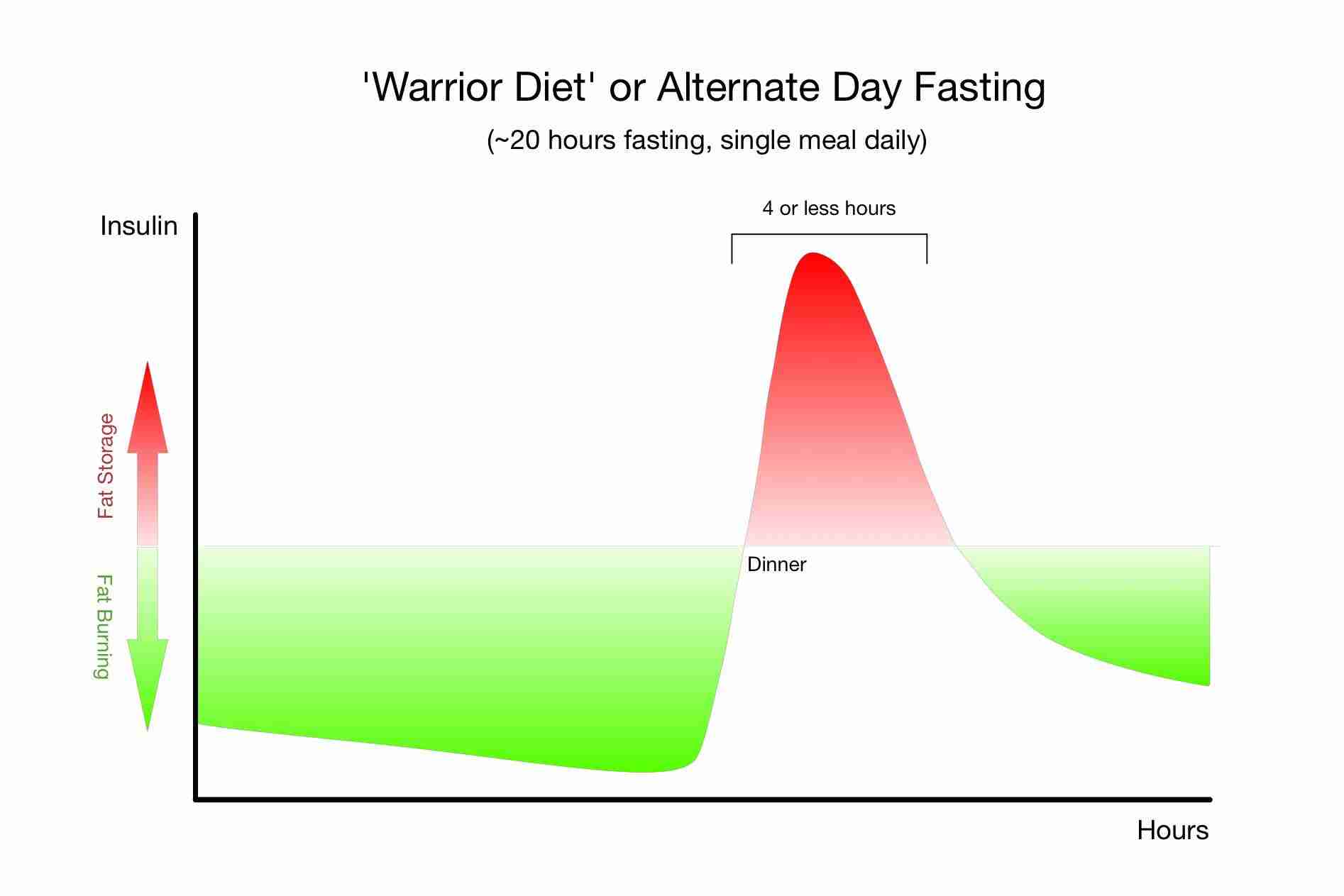 Drawing upon inspiration from ancient warrior tribes such as the Spartans and Romans, the core of the diet consists of eating all meals in the evening during a 4 hour window. The fasting period of 20 hours consisted of most of the day. There was also an emphasis on natural unprocessed foods and  high intensity training.
The main point of all these fasting regimens is the same. It allows the body to lower insulin levels very low for a specified period of time longer than usual. This is precisely what helps to break, or prevent the development of insulin resistance. As we’ve mentioned previously, this is the fundamental biologic principle of homeostasis.
The body likes to maintain everything within a relatively narrow range. Any prolonged stimulus leads to resistance as the body tries to resist the change. In this case, prolonged periods of high insulin will lead to insulin resistance, which will lead back to high insulin levels – in other words, insulin causes insulin resistance.
So, by incorporating daily, or almost daily periods of low insulin, we are able to prevent the development of insulin resistance and even reverse relatively minor levels of resistance. For more established resistance, we would need longer fasting periods – 24 hours or greater.
One of the key advantages of fasting, from a therapeutic standpoint is the lack of upper limit. What this means is that we can continue to apply fasting in an almost unlimited manner with no upper ceiling. The world record for fasting was 382 days, during which the patient suffered no ill effects.
Think about medications for a second. If you take metformin – there is a maximum dose. Same for virtually all meds. Think about low carb or low fat diets – you can only go to zero carbs or fat. There is a maximum dose. That is why insulin is so popular with doctors. You can keep increasing the dose with no ceiling. (As an aside, we recently had a lady taking 400 units of insulin per day in our clinic. Her endocrinologist was happy that her sugars were ‘finally’ controlled. I was appalled.)
Fasting, similarly has no ceiling, which offers much more therapeutic flexibility. In other words, if I can keep applying fasting until I see the desired effect. The dose can go up indefinitely. If you don’t eat, will you lose weight? Of course. So there is almost no question of efficacy. It is only a question of safety and compliance. So for more complicated or serious cases, we can simply increase the dose. We will consider these longer regimens in the next post.
A big thank you to my friend Dr. Ted Naiman who created these graphs.
Start with Fasting part I
Continue with Fasting part 7