“It is now increasingly recognized that the low-fat campaign has been based on little scientific evidence and may have caused unintended health consequences”
It has been over a decade since the influential Harvard researchers Drs. Frank Hu and Walter Willett wrote this in 2001.  Even now, the low fat campaigners are everywhere you care to look.  Things are starting to change, however.  Recently, the admission that perhaps saturated fats were not the enemy splashed across the front page of Time Magazine.
The vilification of fat had its roots in the 1960s.  The key figure was prominent nutritionist Dr. Ancel Keys.  In the post war years, there was increasing concern about the so called epidemic of coronary disease that seemed to be sweeping the United States.  The cause of coronary artery disease is a ruptured atherosclerotic plaque.  Pathologic studies clearly identified that there was cholesterol contained within these plaques.
Searching for a culprit, cholesterol was in the wrong place at the wrong time.  This seemed to make some superficial sense.  High cholesterol levels were believed to cause plaque buildup thereby blocking the artery causing heart attacks.  If high blood cholesterol levels were bad, then eating cholesterol must be, too.
This ignored the fact that the overwhelming majority (80%) of the cholesterol in the blood is manufactured by our liver.  Only 20% comes from our diet.  From the bad rap it has gotten, you might believe that cholesterol is some harmful poisonous substance to be eliminated.  Actually, nothing could be farther from the truth.  Cholesterol is a key building block in the plasma membranes that surround all the cells in our body.  In fact, it is so vital, that every cell in the body except the brain, which is too specialized, has the ability to make cholesterol.  If you reduce cholesterol in your diet, your body will simply make more.
In the early 1950s, increasing attention was being paid to heart attacks which seemed to strike middle aged men and women randomly.  During a sabbatical leave to Oxford University in 1951, Dr Ancel Keys was struck by the fact that Italian labourers had low rates of heart attack and hypothesized that the low dietary intake of fat helped to protect them.  Through the 1950s he began informal surveys about diet in various countries and measured bloodwork including blood cholesterol levels.
Dr Keys doggedly pursued his hypothesis that increased dietary fat caused increased coronary disease.  This led to the famous Seven Countries Study, an observational study that compared different rates of coronary disease and different diet and lifestyle factors.  In 1970, at the 5 year point there were three main conclusions with regards to fats. 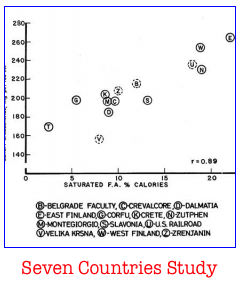 The SCS made notable contributions to our understanding of other coronary risk factors that ultimately proved correct.  For instance, it significantly strengthened the link between cigarette smoking and heart disease.  The importance of blood pressure was identified in this study as well.  Physical activity was identified as a major protector.
It was from this study that interest in the Mediterranean diet soared, and continues to this date.  Many date the start of the Low Fat period to Dr. Key and this particular study, but it is noteworthy that total fat was not correlated to heart disease.  Instead, it was not until he separated saturate and unsaturated fats that the association was made. 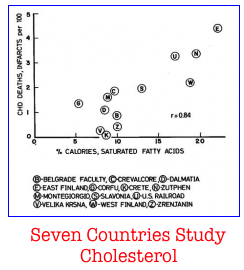 So It seems that as saturated fat goes up in the diet, serum cholesterol does as well.  The next conclusion was that as saturated fat goes up, so does death from coronary disease.
This was really the first time that saturated fats came onto the radar screens.  There were several problems with this, although none was very obvious at the time.
First, this was a correlation study.  That means that  this could not prove causation.  One of my personal rules is that correlation studies are mostly crap.  There is nothing more dangerous in medicine as the correlation study.  I wrote about this previously.  They are dangerous because you can very easily and mistakenly draw causal conclusions.
For example, women taking hormone replacement had a 50% reduction in coronary disease.  But when you give HRT, you increase rates of heart disease, blood clots and breast cancer.  The problem is that women who had been taking HRT were also healthier in other ways.  The HRT was not beneficial, it was harmful, and the drug maker Wyeth got sued into non-existence.
If we were making the same claims about people, it would be called racism.  For instance, many basketball players are black.  There is a strong correlation.  But they are not good because they are black.  They practise hard for long hours.  Many Chinese are good at math.  But they are not good because they are Chinese.  They practise hard for long hours.  There are many negative stereotypes as well, but I’d prefer not to list those.
You can only prove that saturated fat causes heart disease by a randomized trial which is extremely expensive and difficult to perform.  Indeed, there are many times that observational data is the best that we have.  Data from the large Nurse’s Health Study and the Health Professional’s Follow Up Study suffer from the same problem.  Yet they still represent the best data available, flawed as it is.  Evidence based medicine was in its infancy, and the problems of observational data were even less appreciated than it is today. So, if a country happens to have high heart disease rates, and high levels of saturated fat intake, this does not immediately mean that the saturated fat caused heart disease.
Some recognized this fatal flaw immediately.  In a rebuttal to Dr. Keys, Drs. Yerushalmy  and Hilleboe wrote:

But quotation and repetition of the suggestive association soon creates the impression that the relationship is truly valid, and ultimately it acquires status as a supporting link in a chain of presumed proof.

As Denise Minger wrote on rawfoodsos.com  True that, Yerushalmy and Hilleboe.  True.  That.  This, of course would soon be standard operating protocol for nutritional doctrines everywhere.  Oh, not sure if salt if bad?  Just repeat it enough until it becomes true.  Oh, not sure if fat is bad?  Just repeat ad nauseam until it becomes true.  Oh, not sure calcium tablets are bad?  Just repeat ad nauseam until it becomes true.  Innuendo and repetition.  Innuendo and repetition.  Innuendo and repetition.
The second major problem was the inadvertent use of nutritionism.  This is a fatal conceit that we understand enough about food chemistry and biology to reduce all foods to a blend of fat, protein and carbohydrate.  Here, for instance, Dr. Keys makes the unnoticed and unintentional claim that all saturated fats, all unsaturated fats, all dietary cholesterol etc. are the same.
This is similar to comparing sugar to kale because both are carbohydrates.  Or comparing trans-fat laden margarine to an avocado because both are fats.  Or comparing a processed, nitrite laden piece of salami to a grass fed organic beef because both are proteins.
Again, if we applied this to people, it would be called racism.  You cannot assume that your black friend is as good at basketball as Michael Jordan, just because they are both black.  I cannot sing as well as Celine Dion just because we are both Canadian.  I am not as smart as Albert Einstein just because we are both men.  Here the mistake is obvious.  In nutrition, we fail to consider foods as individuals – all with their own particular good and bad traits.
There was also some complaints from later analyses that Dr. Keys may have ‘cherry picked’ his countries to those that he knew would show the correlation.  This may or may not have been the case, but largely irrelevant.  This sort of thing happens in studies all the time.  The greater concern is the wrongful use of observational data and the rise of nutritionism.
One notable correlation that Dr. Keys insisted did NOT exist was the link between dietary cholesterol and serum cholesterol.  Since cholesterol in the blood (80%) is mostly manufactured by the liver, the diet has very little to do with it.  This was recognized very early on, but despite that, it became entrenched in popular culture that dietary cholesterol was bbbaaaadddd.  Where we got that idea from, I don’t really know.
Continue to The Diet-Heart Hypothesis – Hormonal Obesity XXXV
Start here with Calories I – How Do We Gain Weight?
See the entire lecture – The Aetiology of Obesity 6/6 – Fat Phobia