Losing a single gram of fat can reverse diabetes? – T2D 9

Can removal of a single gram of fat from the pancreas reverse T2D? That’s exactly what Dr. Taylor from the UK recently postulated in his latest paper. How is this even possible?
First, a little background. T2D is characterized by two main defects. First, there is excessively high insulin resistance, predominantly in the liver. You can think about it this way. Insulin’s job is to stuff food energy (sugar) into the liver for storage (glycogen). Once glycogen is full, the liver turns excess carbohydrates into fat by the process of DeNovo Lipogenesis (DNL). If the storage bin (liver) is empty, food energy goes in easily. 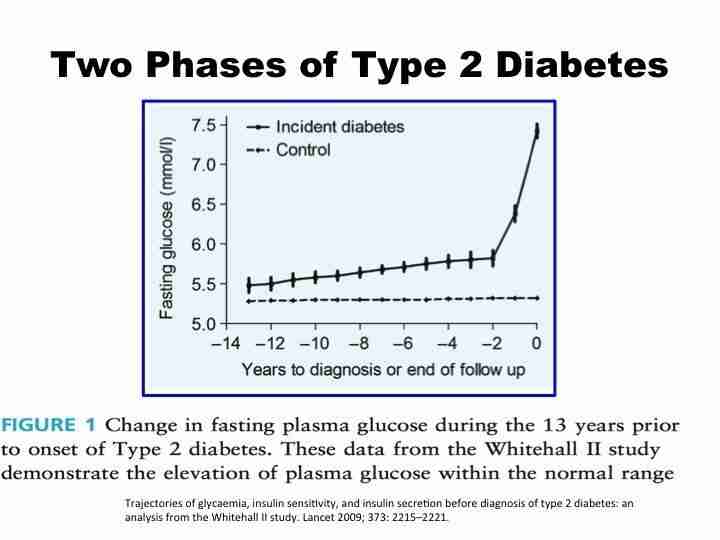 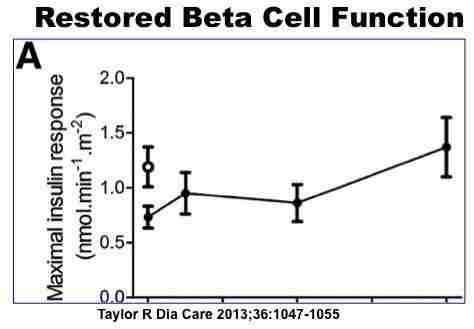 But something happens about 2 years before the diagnosis of T2D. The amount of insulin falls from very high levels. While the overall level is still high, it is not high enough to ‘overcome’ the insulin resistance and the blood glucose starts to rise. Quickly. Soon, the blood sugars are high enough to make the clinical diagnosis of T2D. This is sometimes termed ‘beta cell failure’.
The beta cells in the pancreas normally produce insulin. It is imagined that they ‘burn out’ from having to secrete so much insulin for so long to cope with the insulin resistance. Thus, they say that T2D is a chronic and progressive disease with beta cells gradually burning out leading to worsening disease over time.
But another possibility exists. Dr. R. Taylor of Newcastle, suggests, in his twin cycles hypothesis, that the beta cells are not actually burnt out. Instead, they are merely clogged with fat. Fatty pancreas, so to speak. The insulin resistance seen in the first phase is due to the fatty liver. The fat in the liver can be exported out to other organs and some of it winds up in the pancreas. 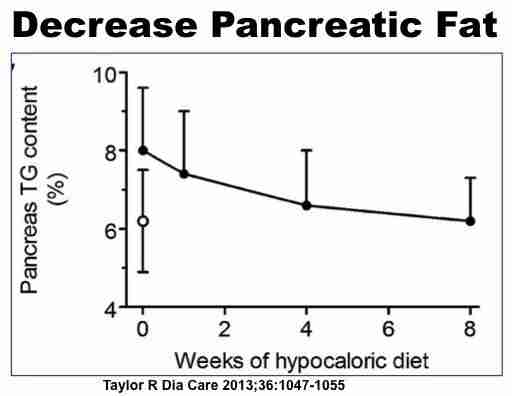 This fatty pancreas causes the beta cell dysfunction, not failure. This is supported by the COUNTERPOINT study that used a very low calorie diet (600 calories/day) over 8 weeks. The beta cells recovered slowly in association with a decrease in pancreatic fat. This proved that the cells were not irreversibly burnt out as had always been suggested. Instead, they were merely clogged, and needed a good clean out.
This was a great start. But the mere association is not enough to prove causation. Was the decrease in pancreatic fat was simply due to overall decreased weight? So Dr. Taylor did a follow up study to pinpoint the role of the fatty pancreas.
He chose patients undergoing bariatric surgery because there was a consistent weight decrease. He divided them into two groups – one with type 2 diabetes and one without (NGT or normal glucose tolerance). Both groups were matched for age (49) and weight (120kg). Post operative weight loss was also similar in both groups (13kg weight loss after 8 weeks).
Fasting blood glucose in the T2D group drops from 9.4 mmol/L to 6.4 and A1C drops from 7.6% to 6.2%. Despite the fact that these patients are still well over 100 kg, they have reversed their T2D. Since the NGT group did not have diabetes, there was only a minor drop in fasting blood sugars. Fasting insulin drops in both groups, though, reflecting improved insulin resistance. This is all as expected.
Now things start to get interesting when Dr. Taylor measures intra-organ fat using sophisticated MRI technology. What is the difference in 2 people of equal age and weight, but one has T2D while the other does not. Why does that happen? It is clearly not only due to the weight. The crucial difference is the amount of fat in the liver and the pancreas.

T2D patients have much higher levels of pancreatic fat. (panel B). This situation is unique to T2D and not found in the obese non diabetic.
Before surgery, the first phase insulin response is also much lower. That is, the pancreas is clogged up with fat and therefore, unable to secrete enough insulin.
8 weeks after bariatric surgery, though, the pancreatic fat in the T2D patients is the same as those with NGT. The insulin response has also normalized. In other words, the beta cells had not failed at all. It was a reversible condition. Clinically, the T2D reversed.
The non diabetic group had normal levels of fat in the pancreas before and after surgery. The major distinguishing feature between these two equally heavy groups of patients is the presence or absence of fatty pancreas. This may answer the question of why somebody gets T2D and another does not. The Fatty Pancreas.

What happens to liver fat?
The T2D group at baseline has a much higher level of liver fat. By 8 weeks after surgery, it has decreased to the level of the pre-surgery NGT group. Insulin resistance essentially normalizes and clinically, the T2D also goes into remission.
So what is the difference between 2 equally obese persons, but one has T2D and the other does not? It’s all about the fatty liver which causes insulin resistance, and fatty pancreas which causes the beta cell dysfunction. It’s not simply about total weight.
There are 2 problems in T2D – insulin resistance and beta cell dysfunction. In the standard understanding of T2D, they are two entirely different pathophysiologic processes. First, you get insulin resistance. This causes over secretion of insulin resulting in beta cell burnout. So these two problems have two entirely separate and distinct causes. And this can all happen in a few years, since children are now being diagnosed with T2D.
But since when does over secretion of a hormone cause burnout of the organ? Does hyper secretion of thyroid hormone cause thyroid burnout? No. Does over secretion of cortisol cause adrenal burnout? No. Does overexercise of muscle cause muscle burnout? No. Does over thinking cause brain burnout? No. In fact, over stimulation usually leads to hypertrophy, not atrophy. That is to say that increased exercise leads to growth of organs, not fibrosis. Even if there was ”burnout”, this process often requires several decades.
The twin cycles hypothesis makes much more sense. This means that there are not two separate processes that result in T2D. There is only 1 problem – excessive intra-organ fat accumulation (due to hyperinsulinemia). As Dr. Taylor shows, once you remove the intra-organ fat, the insulin resistance and beta cell failure disappears. In that sense, the removal of a single gram of fat from the pancreas can reverse T2D!
Looking at T2D from this vantage point also clears up another so-called paradox. Insulin is an energy storage hormone. So two of its effects are to reduce hepatic glucose production (HGP) and to increase storage of fat via DeNovo Lipogenesis (DNL). So some researcher have called a paradox in T2D that the liver is insulin-resistance because it does not shut off HGP, at the same time that it is insulin sensitive because there is plenty of fat in the liver via DNL.
Of course there is no real paradox, merely a fundamental mis-understanding of insulin in th conventional view. Remember that that liver is like an overinflated balloon. Insulin has a hard time shoving more fat and sugar into a fatty overstuffed liver. So, it tries to relieve itself by pushing out glucose (HGP). That is how you have co-existent effects. Notice how bariatric surgery reduces both fatty liver and hepatic glucose production? 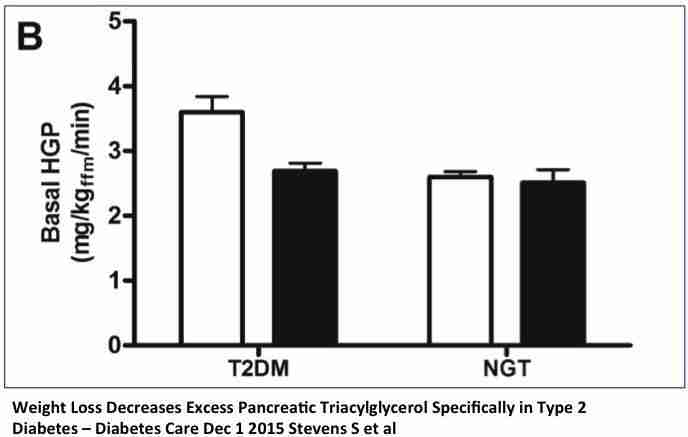 The clinical implications are simply mind-boggling. First, it demonstrates that T2D is not a chronic progressive disease. The two problems (hepatic IR and beta cell dysfunction) are fully reversible conditions and caused by the same intra-organ accumulation of fat. That is amazing news. This means there is hope for all those millions of T2D patients despairing that they have been given a life sentence.
Second, it means we need to focus much more closely on what causes fatty liver and pancreas. We can cure diabetes by removing a single gram of fat. But how do we get that single gram of fat out of the pancreas? Well, we know that bariatric surgery works. But there’s so many complications and risk? What about just doing medical bariatrics – fasting? It’s free, simple, and effective.