One commonly overlooked aspect of obesity is its genetic underpinnings.  Obesity tends to run in families.  Obese parents have obese children.  Obese patients often have obese siblings.  Yet most conventional theories of obesity do not account for these genetic effects.  Start here for Hormonal Obesity.
For example, in the erroneous Caloric Reduction as Primary theory, genetics should play no role.  Eating less and moving more are both voluntary behaviors.
However, genetics plays a large role in obesity.  In the classic “An Adoption Study of Human Obesity” Dr. Stunkard divided a sample of 540 Danish adult adoptees into 4 weight categories. 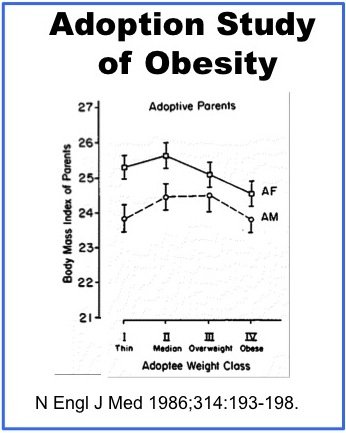 He compared Body Mass Index of the adoptees to the parents who adopted them.  There was no relationship between the weight of the adoptive parents and the adoptees.  The weight class of the parents and adopted children had almost nothing to do with each other.
Standard Calorie-based theories blame environmental factors for the increase in calorie intake.  Fast food, hyper-palatable foods, lack of exercise, lack of playgrounds etc.  If obesity is largely due to such environmental factors then there should be at least some correlation between the parents and adoptees.
But there is none.  In fact, the fattest adoptees had the thinnest parents.
Now what happens when you compare the adoptees to the biological parents?  There is a very strong correlation between the biological parents and the adoptees.  Even when you take the child away from the obese parents into a ‘thin’ household, the child still becomes obese. 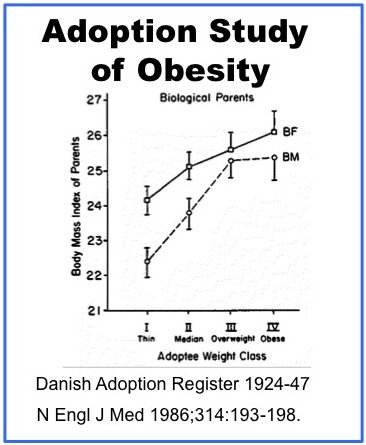 Several years later, Dr. Stunkard examined obesity the Swedish pairs of twins who had been reared apart in another classic study “The Body-Mass Index of Twins Who Have Been Reared Apart“.
He examined both fraternal and identical twins reared apart and reared together  to see how much the twins differed from each other in weight.
His results showed that roughly 70% of obesity is genetic.
70%
No, that is not a typo.  Your genes determine 70% of the tendency to gain weight.  However, it is immediately clear that genetics cannot be the only factor leading to the increase in obesity.
The increase in obesity from the 1970′s to today has happened in a single generation.  Our genes have obviously not changed in that time. 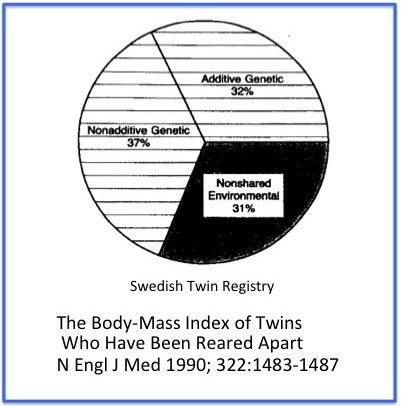 How can we explain this seeming contradiction?
Insulin is a major driver of obesity.  However, our genes determine our individual susceptibility to obesity.  Some of us are more sensitive to insulin than others.  For a given level of insulin, some of us will tend to gain weight easily and others will not gain weight at all.
Intuitively, we already know this.  How many times have we thought to ourselves that we only need look at a bagel to gain 2 pounds?  And then look enviously at the skinny kid at the next table wolfing down his second bagel?  It is not that the skinny kid has any more willpower than us.  It is not that their bagels have less calories.  It is not that he exercises more than us.
That bagel has the same calories.  The insulin released is the same.  However, our response to this increase in insulin is different for each of us.  For those prone to weight gain, that insulin will result in an increase in body set weight.  For those not prone to weight gain, it will not.  Our body weight response to insulin is genetically determined.
70% of the tendency to obesity is genetic.  The sensitivity of the brain to insulin determines this.  This study “Acute Postchallenge hyperinsulinemia predicts Weight Gain” demonstrates this perfectly.  107 children with 2 parents with type 2 diabetes were followed over 16 years.
Both insulin secretion and insulin sensitivity were measured.  It wasn’t enough to have high insulin secretion.
The children who gained the most weight needed both high insulin secretion and high sensitivity to the weight gaining effect of the insulin.
It may seem confusing here to talk about insulin sensitivity when we have been talking about insulin resistance.  After all, if cells are resistant to the effect of the insulin, then the higher level of insulin should have no effect.  The answer is that insulin has different effects on different parts of the body – the main parts being the muscle, the liver and the brain. 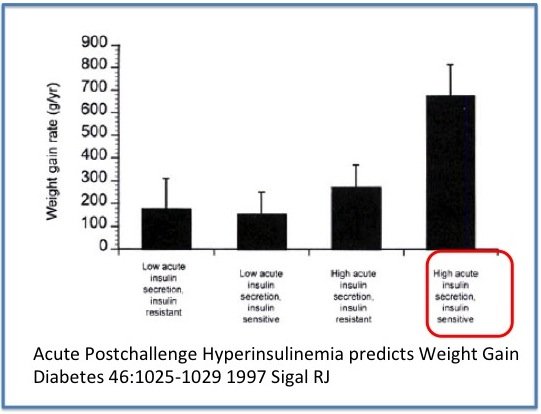 Each part has a certain sensitivity or resistance to insulin, and this does not affect the other.  Exercise, for instance will increase the sensitivity of muscles to insulin but has no effect on insulin sensitivity in the liver or brain.
When we eat carbohydrates and the liver gains fat (fatty liver), we develop insulin resistance in the liver, but this does not affect the brain or muscles.  The effect of insulin in the brain is to increase the body set weight which will cause you to gain fat.  The sensitivity of insulin in the brain is not affected.
If we are genetically programmed to be very sensitive to insulin in the brain, that means that brain is very sensitive to its weight gaining effect.  If we start to develop insulin resistance in the liver, this will cause an increased insulin level which will now affect the brain.  The brain’s insulin resistance is not affected by the liver or the muscles’ insulin resistance.
There are even single gene mutations that link insulin sensitivity and weight gain recently discussed in the New England Journal of Medicine.  A single mutation resulted in both weight gain, decreased tendency to diabetes and increased cancer risk.
The gene mutation increases insulin sensitivity in all areas including the brain and liver.  Because the effects of insulin are increased, there is a tendency to weight gain.  The same increase sensitivity will tend to magnify the effects of insulin – resulting in lower blood sugars and less type 2 diabetes.
It turns out that insulin is a growth factor and tends to increase risk of cancer as well.  Therefore the increased insulin effect tends to cause more cancer.  In fact, that is how they discovered this gene in the first place – by looking at genetic markers of cancer.

The most important thing to realize is that there is a common pathway between insulin and weight gain.
Another study “Sugar-Sweetened Beverages and Genetic Risk of Obesity” develops these ideas further.  The researchers took data from the Women’s Health Study and the Health Professionals Follow-Up Study and looked at the risk of obesity with sugar sweetened beverages (SSB) – fruit juices and sodas.
Not much surprise in the finding that increasing use of SSB correlates to increased weight.  They went one step further, though. 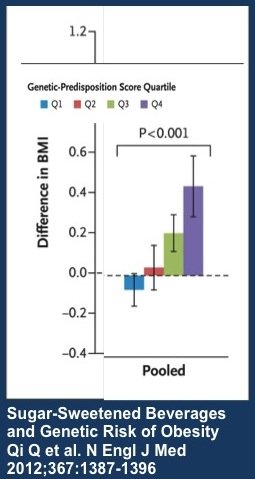 The researchers now broke the group into 4 based on a genetic score for obesity.  Q1 was the group with the least genetic risk of obesity.  Q4 was the group with the highest genetic risk of obesity (the ones who gain weight by looking at a bagel).  The group Q4 showed a marked tendency to obesity with each additional drink of SSB.  No surprise here.
Here’s the surprise.  Look at the Q1 group.  They can drink as much soda pop as they want, and not gain a single ounce!.
These are the ‘Don’t hate me because I’m beautiful’ people.  Don’t you just hate them?  These are the people who eat and drink whatever they want and never gain an ounce.
Continue to The Epiphenomenon of Obesity 3 here
Begin here with Calories I
See the entire lecture here – The Aetiology of Obesity 2/6 – The New Science of Diabesity