In our last post, we detailed the 6 Hallmarks of Cancer originally described in 2001. In the 2011 update researchers added two ‘enabling characteristics’ and two ’emerging hallmarks’. The two enabling characteristics are not hallmarks, but enable the hallmarks to happen. The first one was ‘Genome instability and mutation’, which is kind of obvious. Since cancers have hundreds of mutations, it is self-evident that the genome must be able to mutate, and thus the genome has some inherent instability. This adds very little to the understanding of cancer. The second is ‘Tumor Promoting Inflammation’. It has long been recognized that all cancers have inflammatory cells within them. Since inflammation is a response to injury, this is an expected result of the body trying to rid itself of the cancer. Natural killer cells had been long described, which are immune cells patrolling around the blood trying to kill off cancer cells. However, newer research pointed to the fact that this inflammation was in many cases paradoxically doing the opposite – helping the tumor. While interesting, these two enabling characteristics shed little light unto how cancer originates and spreads. 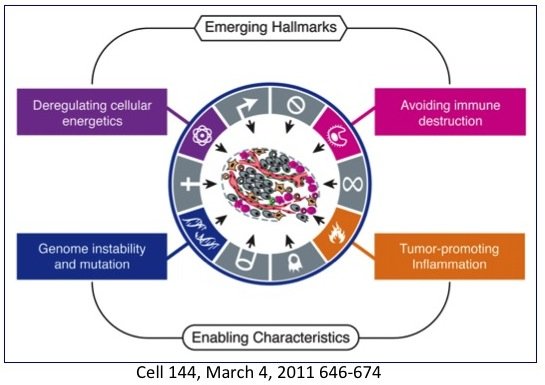 In addition to these two enabling characteristic, two emerging hallmarks were added. The first ‘Evading Immune Destruction’ reflects the immune surveillance theory. Our immune system is always patrolling the blood and killing off micro metastatic cancers before they get established. Patients with immune deficiency, such as HIV or given immune suppressing drugs, like transplant recipients are much more likely to develop cancer. Again, interesting, but the description of these hallmarks sheds little light upon cancer’s origins. Cancer cells all just show the three basic characteristics we talked about previously:

The other new hallmark is ‘Reprogramming Energy Metabolism’. This is fascinating. Under normal conditions, the cell generates energy through aerobic (meaning ‘with oxygen’) glycolysis. If oxygen is present, the mitochondrion of the cell generate energy in the form of ATP. Mitochondrion are organelles, which are like small organs of the cell that provide energy generation – the powerhouses of the cells. Using glucose, mitochondrion use oxygen to generate 36 ATP through a process called ‘oxidative phosphorylation’ or OxPhos. If there is no oxygen, this does not work. For example, if you are sprinting full out, you require a lot of energy in a short space of time. There is not enough oxygen to undergo the usual mitochondrial OxPhos. So instead, the cell uses anaerobic (without oxygen) glycolysis, which generates lactic acid, responsible for the familiar muscle burn upon heavy physical exertion. This creates energy in the absence of oxygen, but only generates 2 ATP per glucose molecule instead of 36. A reasonable tradeoff in the appropriate circumstance.
For every glucose molecule, you can generate 18 times more energy by using oxygen and mitochondrion. Cancer cells, almost universally, use the less efficient anaerobic pathway. In order to compensate for the lower efficiency of energy generation, cancer cells have much higher requirements for glucose and increase GLUT1 glucose transporters. This is the basis for the positron emission tomography (PET) scan for cancer. In this test, labeled glucose is injected into the body. Since cancer takes up glucose far more rapidly than normal cells, you can track the activity and location of cancers. This switch happens in every cancer, and is known as the Warburg Effect. At first glance, this represents an interesting paradox. Cancer, which is growing rapidly, should require more energy, so why would cancer deliberately choose the LESS effective pathway of energy generation? Stranger and stranger. We will consider this in much more detail in the future, because this is anomaly that must be explained. Yet this is utterly fascinating, because it is trying to explain the paradoxes that move science forward.
Modern cancer research had dismissed this unusual paradox by pretending it is some minor observation of minor importance. Yet, it is so unimportant that virtually every single cancer cell  of every type does this? Even though new cancers cells develop all the time, they all share this unusual characteristic. The 2011 update corrects this oversight by adding it to its rightful place as a Hallmark of Cancer. 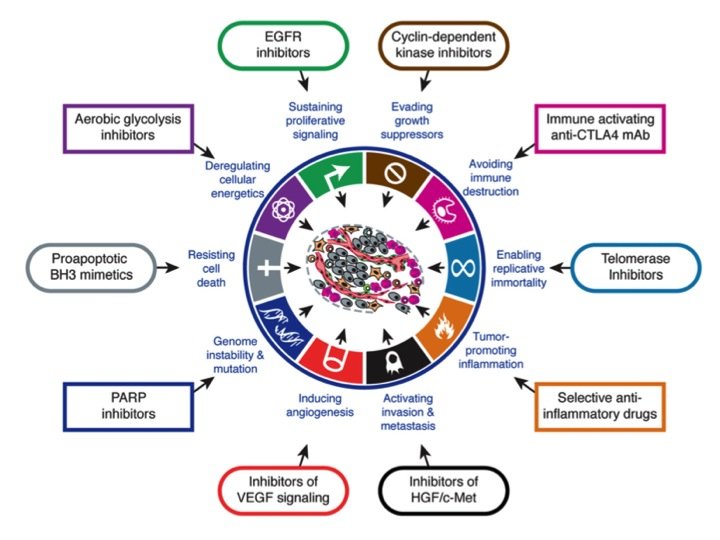 Considering these 8 hallmarks and enabling characteristics, it is possible to look at the drugs/ treatments now being developed to attack cancer on all these fronts. Sounds and looks pretty impressive, and I would expect no less from the many, many billions of dollars poured into cancer research over the past few decades. The least they could do is generate some pretty pictures if they’re not going to produce any real clinical breakthroughs. Like tomorrow, the next breakthrough is always just around the corner, but never comes. Why? The problem is obvious once pointed out. We are attacking cancer’s strengths, not its weaknesses.
We’ve catalogued a number of features shared by most cancers. This is what cancer does better than any normal cell. And that’s what we’re going to attack. But isn’t this a recipe for a disaster? Consider this. I can easily beat Michael Jordan at his prime. I can easily beat Tiger Woods in his prime. I can easily beat Wayne Gretzky in his prime. Wow, you might think, this Dr. Fung guy is pretty deluded. Not at all. How do I do this? I don’t challenge them to basketball, golf or hockey. Instead I challenge them to a contest on medical physiology and then proceed to beat the pants off all three. I’d be an idiot to challenge Michael Jordan at basketball.

So let’s think about cancer. It grows and grows. That’s what it does better than anything we’ve ever known. So, we try to come up with a way to kill it. We use surgery, radiation and chemotherapy drugs (poisons). But cancer’s a survivor. It’s Wolverine of the X-men. You might want to kill him, but he’s more likely to kill you. Even as we use chemotherapy, for example, it may kill 99% of the cancer. But the 1% survive and become resistant to that particular drug. In the end, it’s marginally effective. Why would we challenge cancer at its strength? That’s challenging Michael Jordan to basketball. You’re an idiot if you think you’ll win.
So, next thing we know is that cancer mutates a lot. So we try to devise ways of trying to stop the mutations. Huh? Isn’t that challenging cancer at what it does best? Absolutely It’s challenging Tiger Woods to a game of golf. We also know that cancer can make new blood vessels. So we try to block it at it’s own game. Really? That’s challenging Wayne Gretzky to a game of hockey. Not fun. Indeed all the treatment pictured above suffer this same fatal mistake. 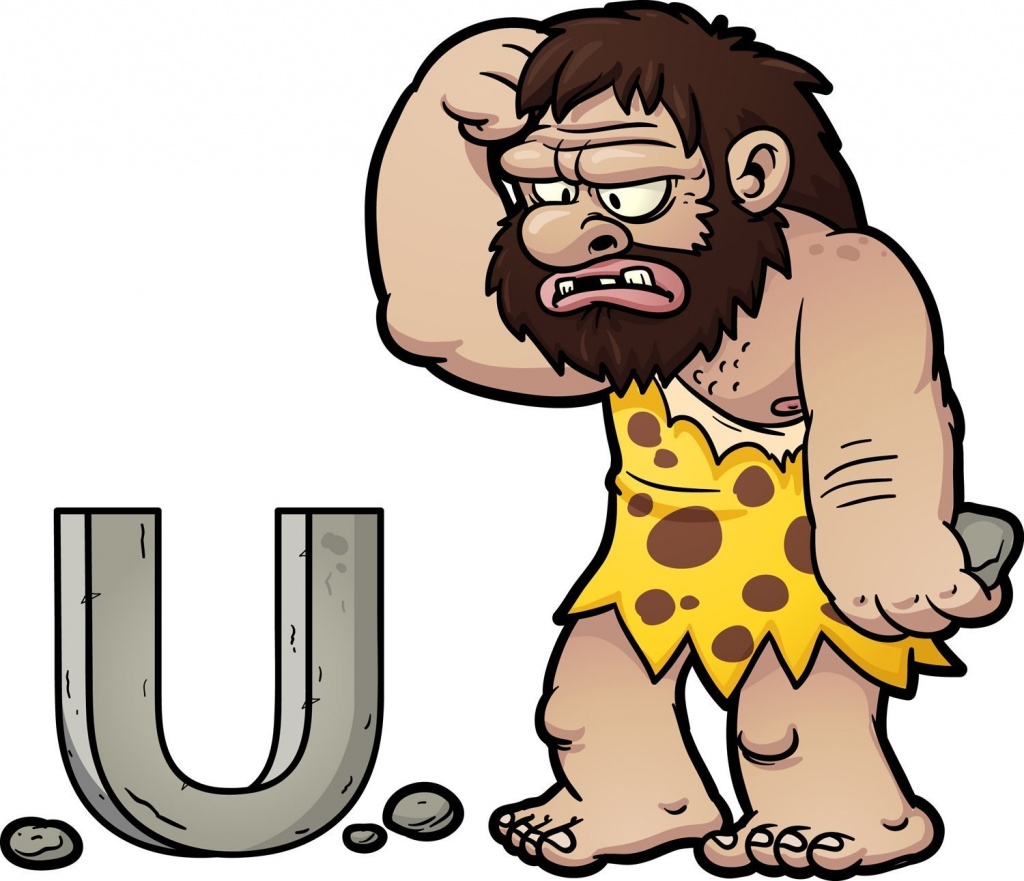 So is there no hope? Hardly. We just need to be smarter and understand cancer at a deeper level. The entire reasoning of cancer treatment is not much more sophisticated than caveman thinking. Grok see cancer grow. Grok kill cancer.
Well, let’s look at the hallmarks again:

Huh? One of these does not fit with everything else. Cancer is growing all the time. This will require a lot of energy and cancer would be expected to use its mitochondrion to generate lots of energy per glucose molecule. But it does not. Almost every cancer instead chooses to use the less effective energy pathway even though there is plenty of oxygen around. That’s bizarre. Instead of using oxygen efficiently, cancer cells chose to burn glucose using fermentation.  Suppose you were building a fast car. You make it sleek, low to the ground and put a spoiler on the back. Then you take out the 600 horsepower motor and put in a 9 horsepower lawnmower engine. Huh? It’s bizarre. Why would cancer do the same? And it was no coincidence. Virtually every cancer does this. Whatever the reason, it is critical to cancer’s origin.
This is not a new discovery. Otto Warburg, the 1931 winner of the Nobel Prize in Physiology, had studied the energy metabolism of normal cells and cancer extensively. He wrote “Cancer, above all other diseases, has countless secondary causes. But, even for cancer, there is only one prime cause. Summarized in a few words, the prime cause of cancer is the replacement of the respiration of oxygen in normal body cells by a fermentation of sugar.”
The Warburg Effect. Now we’re starting to get somewhere. To truly defeat your enemy, you must know them.