Hyperandrogenism
Male sex hormones, called androgens, are normally present in both men and women, but the normal levels for men are far higher than women. Testosterone is the best-known androgen, and contributes to many of the physical factors that distinguish men from women. More than 80% of women who present with symptoms of hyperandrogenism will eventually be diagnosed with PCOS.
Common features of hyperandrogenism include: 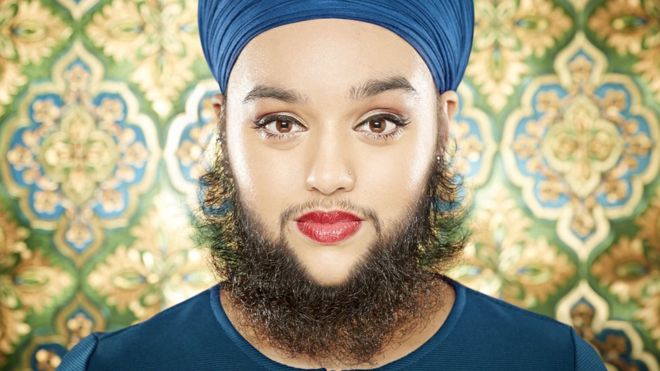 The most common presenting feature of PCOS is hirsutism, affecting an estimated 70% of women. Just as with men, increased testosterone increases the growth of facial and body hair in certain areas, such as the legs, chest, back and buttocks. In other areas, hair loss occurs leading to crown pattern or male pattern baldness. In women, this distribution of hair loss and gain becomes very obvious.
Acne is present in an estimated 15-30% of PCOS patients and only recently recognized as a symptom of hyperandrogenism. However, of women complaining of acne, 40% are eventually diagnosed with PCOS, so it is important to keep it in mind. Deeping of the voice and enlargement of the clitoris indicate fairly severe hyperandrogenism.
Serum androgens may be measured through blood testing. The most useful blood test for hyperandrogenism is serum testosterone levels (total and free) followed by DHEAS (de-hydroepiandrosterone sulfate). Levels of these hormones fluctuate throughout the day and throughout the menstrual cycle, making it harder to define normal and abnormal levels. Nevertheless, 75% of women with PCOS will have an abnormal value, if you look hard enough. Because testosterone levels are not part of the diagnostic criteria, most clinicians do not bother measuring these blood tests.
Androgens also act as precursors to female sex hormones (estrogens) in both men and women. Testosterone may be converted into estrogen, accounting for the ‘man boob’ phenomenon seen in some older and obese men. Excess adipose tissue can convert testosterone to estrogen, causing breast enlargement in both men and women, but only very obvious in men. There are ethnic differences in the sensitivities to androgens, with Caucasians being the most sensitive and Asians being the least.
Menstrual Irregularities
Dr. John Nestler from Virginia Commonwealth University estimates that, “If a woman has fewer than eight menstrual periods a year on a chronic basis, she probably has a 50 to 80 percent chance of having polycystic ovary syndrome based on that single observation”. Irregular, absent or rare menstrual cycles are all common symptoms of PCOS. An estimated 85% of women with PCOS suffer menstrual irregularities.
In PCOS, the main menstrual problems are anovulation and oligo-ovulation. During the normal menstrual cycle, the human egg develops from the primordial follicle. It grows during the first half of the menstrual cycle, and then is released into the fallopian tubes to be carried to the uterus where it awaits fertilization by the sperm. Ovulation is the release of the egg inside the ovary. Anovulation is the term used for the complete lack of ovulation and oligo-ovulation refers to a lower than normal rate of ovulation. The prefix ‘oligo’ comes from the Greek root ‘oligos’ meaning few or scanty. The prefix ‘an’ means ‘not’ or ‘lack of’.
When normal ovulation does not occur, then menstrual cycles may be completely absent (amenorrhea) or may last longer than usual (oligomenorrhea). Irregular menstrual cycles are caused by the failure of ovulation.The lack of ovulation will result in difficulty conceiving and infertility. PCOS is the most common cause of infertility in industrialized nations and also associated with recurrent miscarriages.Having a regular cycle does not mean that ovulation has occurred normally, especially in women with other evidence of hyperandrogenemia. Twenty to 50% of women with signs of excess testosterone and regular periods still have evidence of anovulation.
Over-the-counter ovulation prediction kits use urine strips that test for LH (Leuteinizing Hormone) spikes. LH spikes just before a woman ovulates. Baby-making time! My patients use many of these urine strips during infertile months. Even during months that with menstrual cycle, regular or not (much longer than 28 days), many of those months, women did not have an LH surge, and no ovulation.
Polycystic Ovaries
The Rotterdam criteria defined polycystic ovaries as having the presence of 12 or more follicles in each ovary measuring 2-9 mm in diameter. Follicles are collections of cells in the ovary. During normal menstruation, many follicles begin to develop with one eventually becoming the human egg that is released into the uterus at the time of ovulation. The other follicles normally shrivel up and are reabsorbed into the body. When these follicles fail to shrivel up, they become cystic and appear on ultrasound as ovarian cysts. 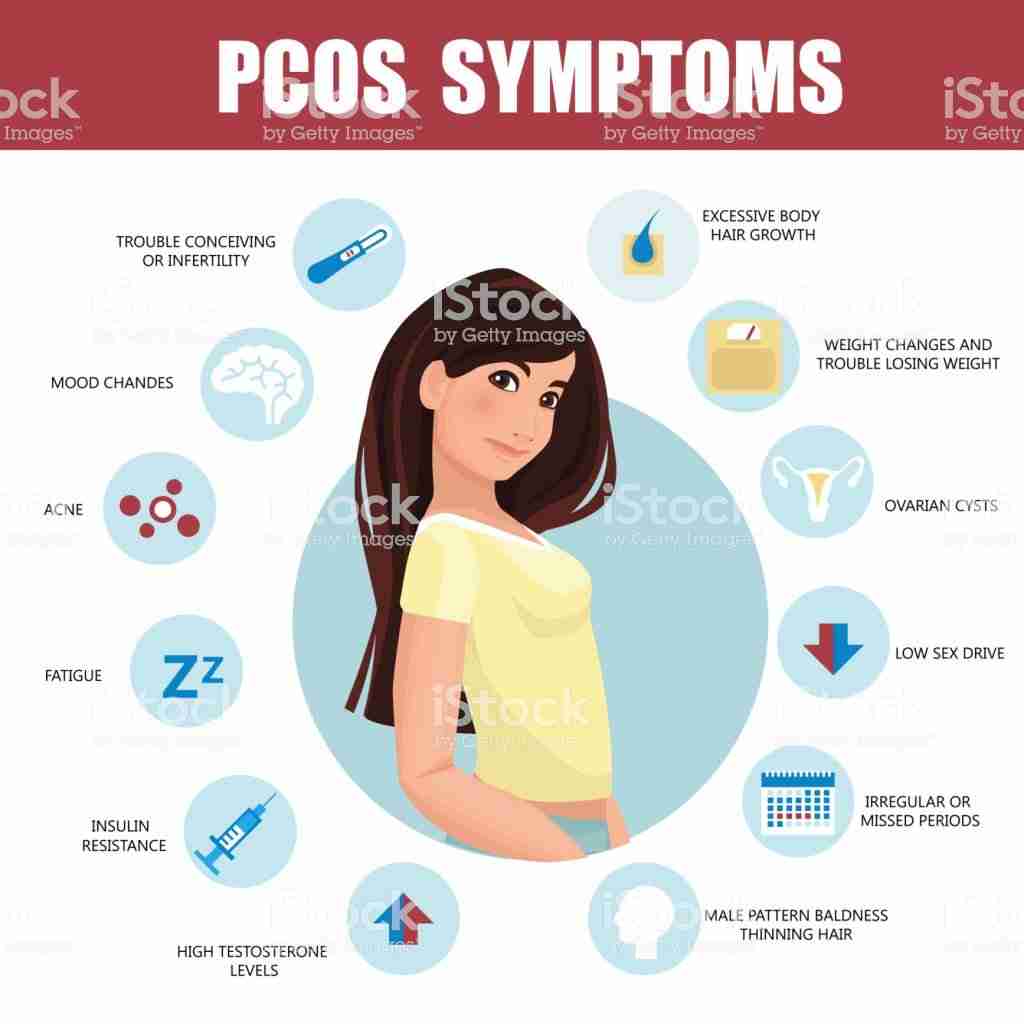 PCOS Symptoms infographic. Detailed vector Infographic. Women HealthTwo main factors influence the number of cysts. Small (2-5 mm) follicles are related to the serum androgen level and larger (6-9 mm) follicles are related to both the serum testosterone and fasting insulin levels.
Because 20-30% of otherwise normal women may have multiple cysts on their ovaries, the mere presence of cysts is not enough to make the diagnosis of PCOS. There is no correlation between the number of cysts and the severity of PCOS.
Making the Diagnosis
PCOS represents a spectrum of disease. On one end are women with polycystic ovaries but no other abnormalities. These women often have ultrasounds for other reasons, and the cysts are picked up incidentally. On the other end of the spectrum are women with all the various manifestations. The Rotterdam criteria recognized this continuum and grouped patients into 4 different phenotypes.
Frank of classic polycystic PCOS (chronic anovulation, hyperandrogenism with polycystic ovaries – 3/3 criteria)
Classic non-polycystic ovary PCOS (chronic anovulation, hyperandrogenism but normal ovaries – 2/3 criteria)
Non-classic ovulatory PCOS (regular menstrual cycles, hyperandrogenism and polycystic ovaries – 2/3 criteria)
Non-classic, mild PCOS (chronic anovulation, normal androgens and polycystic ovaries – 2/3 criteria)
The frank phenotype represents the most severe disease with worse metabolic and cardiovascular risk factors. In contrast, women with non-classic, mild PCOS are at the lowest risk of metabolic disease. Why some women present with hyperandrogenism as opposed to anovulatory cycles is unknown.
While genetic and other factors may conspire to put women along this continuum, their position along this spectrum is likely determined by lifestyle, and particularly their body mass index reflecting obesity. Weight gain moves women towards the severe end of the spectrum. Weight loss, on the other hand, moves women towards the less severe end of the spectrum by improving fertility, ovulatory cycles and hirsutism The broader Rotterdam criteria includes more patients with mild disease. The presence of insulin resistance and metabolic syndrome has been frequently noted, but are not part of the formal definition and affects an estimated 50-70% of PCOS women.