There is a strong relationship between cancer and obesity as discussed in our last post. Since I’ve spent several years arguing why hyperinsulinemia is the root cause of obesity and type 2 diabetes, it would only make sense that perhaps i think it may play a role in cancer development, too.
This link has been known for quite some time, although it has been obscured in the hurry to proclaim cancer a genetic disease of accumulated mutations. Since obesity and hyperinsulinemia is clearly not mutagenic, this relationship is easily forgotten, but emerges once again as the paradigm of cancer as a metabolic disease begins to be considered seriously. For example, it is quite simple to grow breast cancer cells in a lab. The recipe has been used successfully for decades. Take breast cancer cells, add glucose, growth factor (EGF) and insulin. Lots and lots of insulin. The cells will grow like weeds after a spring shower. 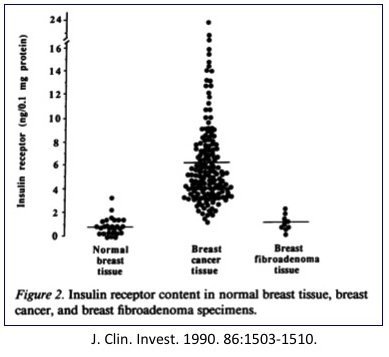 But what happens when you try to ‘wean’ them off insulin? They drop off and die. Dr. Vuk Stambolic, a senior cancer researcher says it’s like “They’re addicted to (insulin)”.
But wait a second, here. Normal breast tissue is not particularly insulin dependent. You find insulin receptors most prominently in liver and skeletal muscle cells, but breast? Not so much. Normal breast tissue doesn’t really need insulin, but breast cancer cells cannot live without it.
In 1990, researchers found that breast cancer cells contain over 6 times the number of normal insulin receptors as normal breast tissue. That would certainly explain why they need insulin so bad. Indeed, it is not simply breast cancer that shows this, but hyperinsulinemia is also linked to colon cancer, pancreas, and endometrium.
Many tissues that are not particularly rich in insulin receptors develop cancers that were chock full of them. There must be a reason, and that reason is fairly obvious. The growing cancer requires glucose to grow – both for energy and as raw material to build with – and insulin could help bring in a flood of it.
But there was another concern about the high insulin levels – the development of insulin like growth factor 1 (IGF1). Insulin promotes the the synthesis and biologic activity of IGF1. This peptide hormone has a molecular structure very similar to insulin and it regulates cellular proliferation. This was discovered in the 1950s although the structural similarity to insulin was not noted until 2 decades later. Because of those similarities, insulin easily stimulates IGF1 as well.
This certainly makes sense to link a nutrient sensing pathway like insulin to growth of cells. That is, when you eat, insulin goes up since most meals, except maybe pure fat, causes insulin goes up. This signals the body that there is food available and that we should start cellular growth pathways. After all, it makes no sense to start growing cells when there is no food available – all those new baby cells would just die. *sniff…*
This is also born out in classic animal studies of the effect of starvation on tumours. First noted in the 1940s by Peyton Rous and Albert Tannenbaum, rats with a tumor induced by virus could be kept alive by only giving barely enough food to keep them alive. Once again, this kind of makes sense. If the rat’s nutrient sensors figured there wasn’t enough nutrients, all growth pathways, including those of cancer cells would be inhibited. 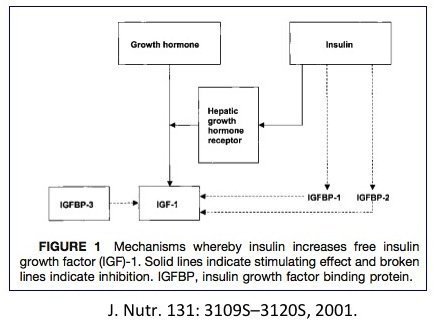 As insulin goes up, GH goes down. Nothing turns off secretion of GH like eating. Insulin works to move glucose from the blood into the cells, and GH works in the opposite direction – moving glucose out of (liver) cells into the blood for energy. So, there is no real paradox here. Normally, GH and insulin move in opposite directions, so IGF1 levels are relatively stable despite fluctuations in insulin and GH.
Under conditions of excess insulin (hyperinsulinemia) you get excessive IGF1 levels and very low GH. If you have pathologic GH secretion (acromegaly) you will get the same situation. Since this occurs only in those rare pituitary tumours, we will ignore this, since its prevalence pales in comparison to the epidemic of hyperinsulinemia in current Western civilization.
The liver is the source of over 80% of circulating IGF1, of which the main stimulus is GH. However, in patients who are chronically fasting or type 1 diabetes, low insulin levels cause reductions in liver GH receptors and reduced synthesis and blood levels of IGF1. 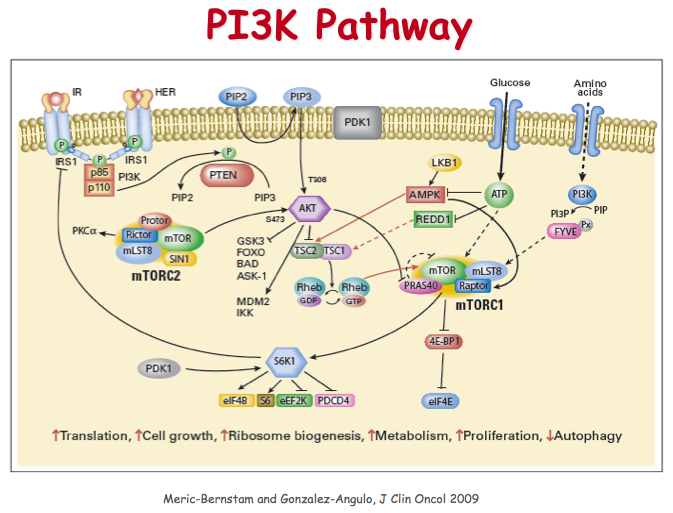 In the 1980s, it was discovered that tumours contain 2-3 times more IGF1 receptors compared to normal tissues. But yet more links were discovered between insulin and cancer. PI3 kinase (PI3K) is another player in this network of metabolism, growth and insulin signalling, also discovered in the 1980s by Cantley and colleagues. In the 1990s it was discovered that PI3K plays a huge role in cancer, too with it’s links to the tumor suppressor gene called PTEN. In 2012, researchers reported in the New England Journal of Medicine that mutations in PTEN increased the risk of cancer, but also decreased the risk of type 2 diabetes. Because these mutations increased the effect of insulin, blood glucose went down. As blood glucose went down, diagnosis of type 2 diabetes went down as this is how it is defined. PTEN mutations are one of the most common ones found in cancer
However, the diseases of hyperinsulinemia, such as obesity went up. The important point was that cancer, too is a disease of hyperinsulinemia. This is not the only time this has been found. Another study from 2007 used genome wide association scanning to find genetic mutations linked to prostate cancer. One of these mutations found increased risk of cancer, while decreasing risk of type 2 diabetes. 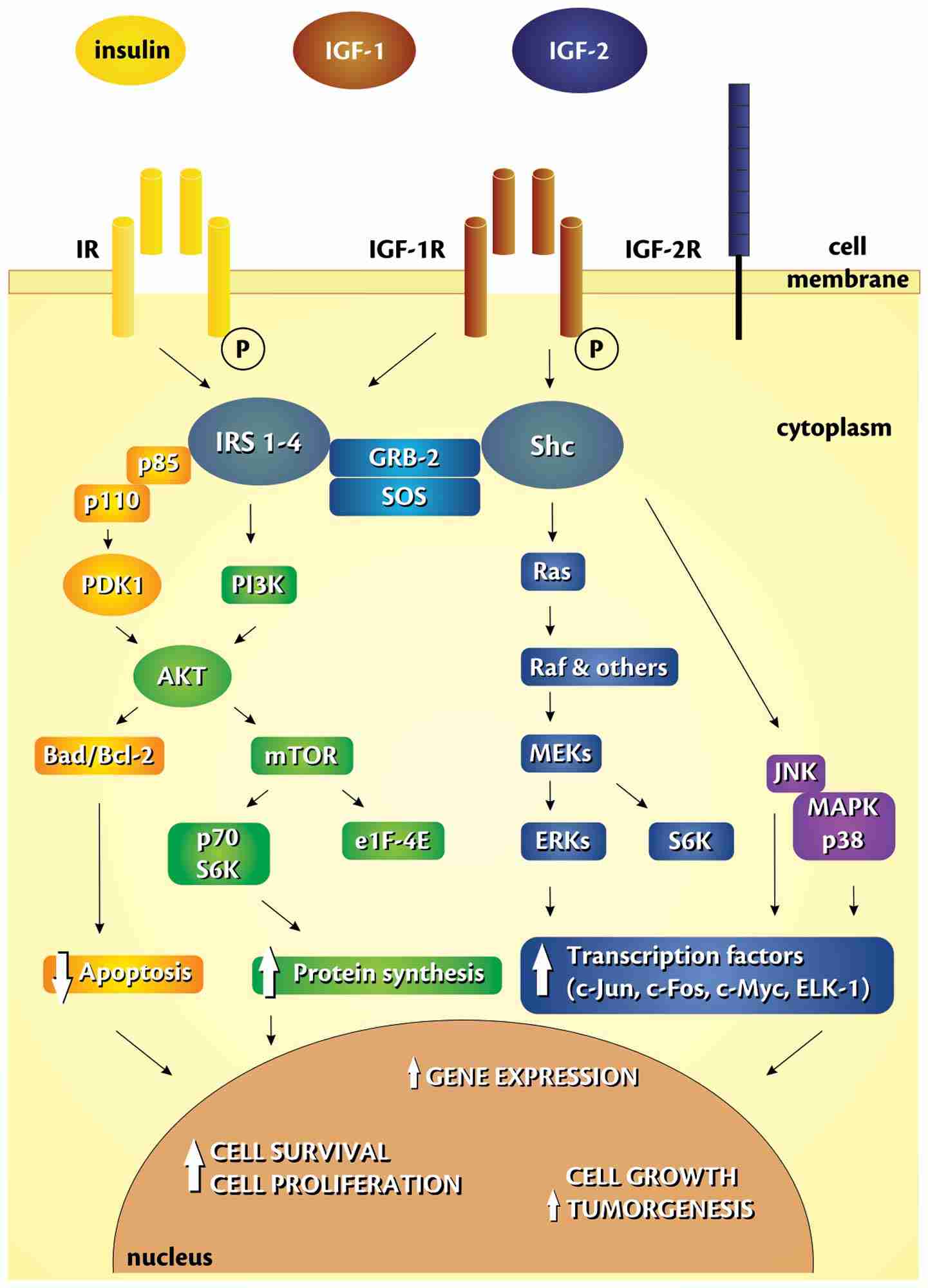 Further, many of the genes that increase the risk of type 2 diabetes are located in very close proximity to those genes that are involved in cell-cycle regulation, or the decision whether this cell proliferates or not. At first glance, this may not make sense, but closer examination reveals the obvious connection. The body makes a decision whether to grow or not. During times of famine or starvation, it is not advantageous to grow, because this would mean there are ‘too many mouths to feed’. So, the logical thing to do is to increase apoptosis (programmed cell death) to cull some of these extraneous cells.
Autophagy is a related process to rid the body of unneeded sub cellular organisms. These extra mouths – like a free loading uncle who has overstayed his welcome – are shown the door because resources are scarce. Nutrient sensors, like insulin and mTOR (which we’ll talk about later) are therefore critical to making the decision of whether cells should grow or not.
It’s known that insulin and IGF1 play a crucial role in apoptosis. Indeed, there is a threshold for IGF1. Below that level, cells will enter apoptosis, so IGF1 is a survival factor for cells.
There are two major factors in cancer. First – what makes a cell become cancer. Second – what makes a cancerous cell grow. These are two entirely separate questions. In addressing the first question, insulin does not play a role (as far as I can tell). However, certain factors increase the growth of cancerous cells. Cancer is derived from normal tissues, and growth factors for those cells will increase the growth of cancer.
For example, breast tissue is sensitive to estrogen (it makes it grow). Since breast cancer is derived from normal breast tissue, estrogen will make breast cancer cells grow too. Hence, anti-estrogen treatments are effective in helping breast cancer not recur (eg. Tamoxifen, aromatase inhibitors). Prostate cells need testosterone and hence blocking testosterone (eg. via castration) will help treat prostate cancer, as well. Knowing what makes tissues grow is valuable information that leads to viable cancer therapy.
Now, what if there are general growth factors that are effective in virtually all cells? This would not make a difference in answering why cancer develops, but would still be valuable in adjunctive treatment of cancer. We already know there are these growth signal that exist in almost all cells. These pathways have been conserved for millennia all the way back to single celled organisms. Insulin (responsive to carbohydrates and protein, especially animal). Yes, but even more ancient and perhaps more powerful, mTOR (responsive to protein).
What if we already knew how to lower these generalized growth signals (nutrient sensors)? This would be an unimaginable powerful weapon to prevent and help in treatment of cancer. Lucky for us, these methods already exist, and they’re free. What is this? (If you don’t know already, you must be a new reader)
Fasting. Boom.

Continue to Cancer Part 3 – Cancer as an endocrine disease