The liver lies at the nexus of metabolism and nutrient flow, particularly carbohydrates and proteins. Situated immediately downstream from absorptive surface of the intestines, those nutrients enter the blood in the portal circulation and pass directly to the liver. The major exception is dietary fat, which is absorbed as chylomicrons directly into the lymphatic system where it empties into the bloodstream without first passing the liver. 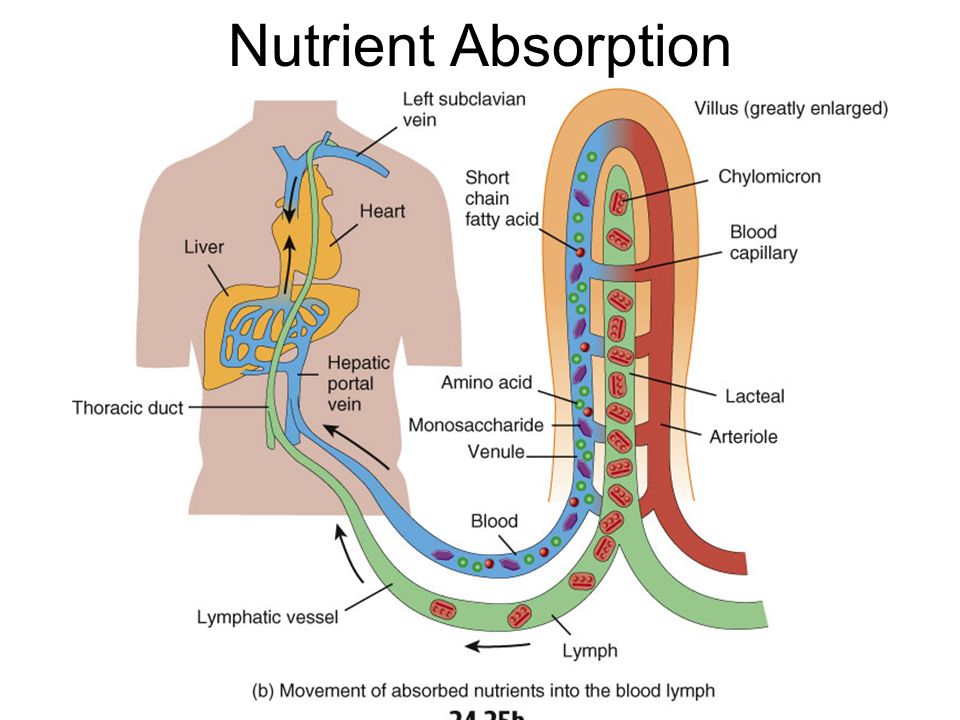 As the major organ responsible for storing and distributing energy, it is naturally the main site of action of the hormone insulin. When carbohydrates and proteins are absorbed, insulin is released from the pancreas. It travels in the portal vein, heading expressly to the liver. Concentrations of glucose and insulin are often 10 times higher in the blood of portal system and liver compared to the rest of the body and the systemic circulation.
Insulin promotes storage of food energy for later use. This is crucial in the survival of the species, since food is not constantly available. We must be able to store enough food to survive the periods of famine inherent in human history. In the liver, glucose molecules from dietary carbohydrates are strung together in long chains to form the molecule glycogen. For a quick energy boost, glycogen can easily be broken back down into its component glucose molecules. 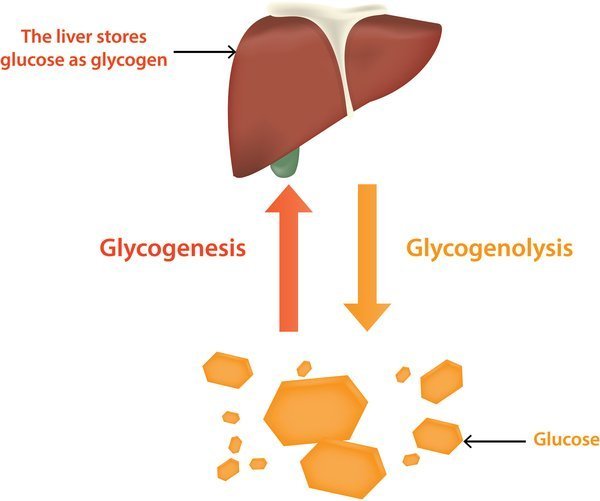 Dietary protein is broken down into its component amino acids upon intestinal absorption. Some amino acids are required for make new proteins and overall protein turnover. However, any excess cannot be stored directly. These must be transformed into glucose at the liver before being stored as glycogen. Dietary fat, because it does not require liver processing, does not require insulin. In response to ingestion of dietary fat, there is minimal insulin secretion.
Glycogen is the preferred storage form of glucose since it is easily accessible. However, there is limited storage room available inside the liver. Glycogen is analogous to a refrigerator. Food brought into the house is easily placed into and taken out of the refrigerator. However, it can only hold a certain amount of food.
Once full, excess glucose needs a different storage form. The liver transforms this glucose into newly created molecules of triglycerides, also known as body fat. This process is called De Novo Lipogenesis (DNL). ‘De Novo’ means ‘from new’, and ‘lipogenesis’ means fat creation. So, DNL means literally, the making of new fat. It is left unsaid that this newly created fat is made from the substrate glucose, not dietary fat. This distinction is important because fats made from DNL are highly saturated, leading to confusion. Eating excessive carbohydrates can lead to an increase in saturate fat levels in the blood.
When needed, the triglyceride molecule from body fat can be broken into three fatty acids which most of the body is able to use directly for energy. Compared to glycogen, it is a much more cumbersome process of converting fat to energy and back again. However, fat storage provides the unique advantage of unlimited storage space.
This body fat is analogous your basement deep freezer. While it is more difficult to move food into and out of your freezer, you may store larger amounts. There is also room to buy a second or third freezer in the basement if needed. These two forms of storage fulfill different and complementary roles. Glycogen (fridge) is easily accessible, but limited in capacity. Body fat (freezer) is hard to access, but unlimited in capacity.
There are two main activators of DNL. The first is insulin. High dietary intake of carbohydrates, and to a lesser extent, protein stimulates insulin secretion and also provides the substrate for DNL. The second main factor is excessive dietary fructose.
With DNL running at full production, large amounts of new fat are being created. But the liver is not the appropriate place to store this new fat. The liver should normally only contain glycogen. What happens to all this new fat?
First, you could try to burn this fat for energy. However, with all the available glucose around after the meal, there is simply no reason for the body to burn the new fat. Imagine that you have gone to Costco and simply bought waaayyy too much food to store in your refrigerator. One option is to eat it, but there’s simply too much. If you cannot get rid of it, much of the food will be left on the counter where it will rot. So this option is not viable.
The only option left is to transfer this new created triglyceride somewhere else. This is known as the endogenous pathway of lipid transport.
Triglycerides are packaged together with special proteins called very low-density lipoproteins (VLDL). These packages can now be exported out to help decompress the congested liver.
The amount of VLDL produced mostly depends upon the availability of hepatic triglycerides. Lots of newly created fat triggers production of more of these triglyceride filled VLDL packages. Insulin plays a key facilitating role in the production of VLDL, by increasing the genes needed for DNL. Experimental infusion of large amounts of carbohydrates increases the release of VLDL from the liver by a massive 3.4 fold. This massive increase in triglyceride rich VLDL particles is the major reason for an increased plasma triglyceride level, detectable in all standard blood test for cholesterol. 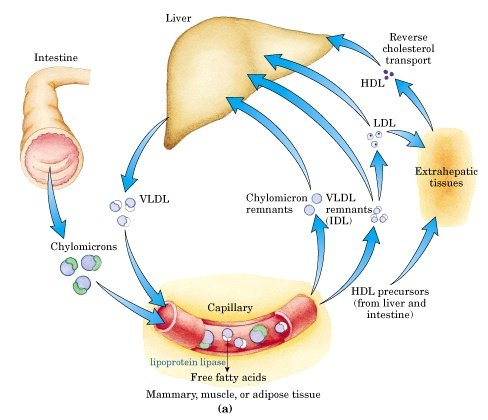 Excessive DNL can overwhelm this export mechanism resulting in the abnormal retention of this new fat in the liver. As you stuff more and more fat into that liver, it becomes noticeably engorged and can be diagnosed on ultrasound as fatty liver.
Once released from the liver, the VLDL particles circulate through the bloodstream. The hormone lipoprotein lipase (LPL), found in the small blood vessels of muscles, adipocytes and heart, breaks down the VLDL. This releases the triglycerides and breaks it into fatty acids, which can be used directly for energy. As VLDL releases triglycerides, the particles become smaller and denser, called VLDL remnants. These are reabsorbed by the liver again and released as low-density lipoproteins (LDL). This is measured by standard blood cholesterol panels and is classically considered the ‘bad’ cholesterol.
High carbohydrate diets increase VLDL secretion and raise blood triglyceride levels by 30-40%. This phenomenon is called carbohydrate-induced hypertriglyceridemia and can occur with as little as five days of high intake. Similarly, increased intake of fructose has been linked to hypertriglyceridemia.
Dr. Reaven described hyperinsulinemia’s starring role in causing high blood triglycerides in 1967 accounting for 88% of the variability. Higher insulin levels produce higher blood triglyceride levels.
Therefore, it is no surprise that reducing dietary carbohydrates and fructose effectively lowers blood triglycerides. The landmark DIRECT study showed that the Atkins-styled diet reduced triglycerides by 40%, compared to only an 11% reduction in the low fat group. But why should we care about high triglycerides?