Insulin causes insulin resistance
Laura was only 25 when she was diagnosed with an insulinoma, a rare tumor that secretes abnormally large amounts of insulin in the absence of any other significant disease. This forces blood glucose very low causing recurrent episodes of hypoglycemia.
Laura was constantly hungry and soon began to gain weight. As insulin is a major driver of obesity, weight gain is consistent symptom of the disease. She noticed problems with concentration and coordination, as she had inadequate glucose to maintain brain function. One night, as she was driving, she lost control of her feet and narrowly avoided an accident. She had experienced a seizure related to hypoglycemia. Fortunately, the correct diagnosis was soon made and she had corrective surgery. 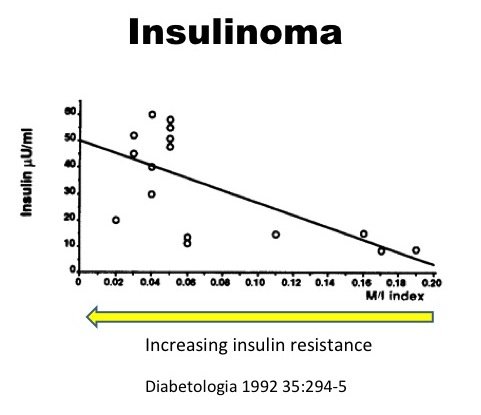 The human body follows the fundamental biological principle of homeostasis. If things change in one direction, the body reacts by changing in the opposite direction to return closer to its original state. For instance, if we become very cold, the body adapts by increasing body-heat generation. If we become very hot, the body sweats to try to cool itself. Adaptability is a prerequisite for survival and generally holds true for all biological systems. Resistance is another word for this adaptability. The body resists change out of its comfort range by adapting to it. Exposure creates resistance. Excessively high and prolonged levels of anything provoke resistance by the body. This is a normal phenomenon.

The very first time you yell at somebody, they jump back and pay immediate attention. Incessant yelling, though soon negates its effect. In essence, they have developed ‘resistance’ to the yelling. The boy who cried wolf soon learned that the villagers became resistant to its effect. Exposure creates resistance. 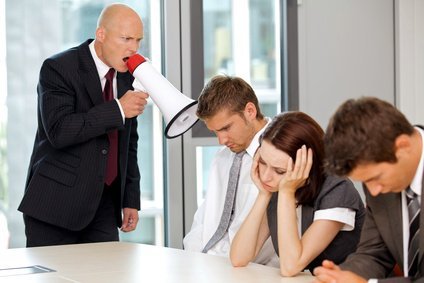 Removing the stimulus removes the resistance. What happens when the yelling stops? If the boy who cried wolf stopped for a month. This silence resets the resistance. The next time he cries wolf, it will have an immediate effect.
Have you ever watched a baby sleep in a crowded, noisy airport? The ambient noise is very loud, but constant, and the baby sleeps soundly, as it has become resistant to its effect. That same baby sleeping in a quiet house might awaken to the slightest creak of the floorboards. This is every parent’s worst nightmare. Even though it is not loud, the noise is very noticeable, as the baby has no ‘resistance’.

When new antibiotics are introduced, they kill virtually all the bacteria they’re designed to kill. Over time, some bacteria develop the ability to survive high doses of these antibiotics turning into drug-resistant “superbugs”. Superbugs multiply becoming more prevalent, until the antibiotic loses its effectiveness. This is a large and growing problem in many urban hospitals worldwide. Every single antibiotic has lost effectiveness due to resistance.
Antibiotic resistance is not a new phenomenon. Alexander Fleming discovered penicillin in 1928 and mass production began in 1942, with funds from the U.S. and British governments for use during WWII. In his 1945 Nobel lecture “Penicillin,” Dr. Fleming correctly predicted the emergence of resistance two years before the first cases were reported.
How did Dr. Fleming so confidently predict this development? He understood the fundamental biological principle of homeostasis. A biological system that becomes disturbed tries to go back to its original state. As we use an antibiotic more and more, organisms resistant to it are naturally selected to survive and reproduce. Eventually, these resistant organisms dominate, and the antibiotic becomes useless. Persistent, high-level use of antibiotics causes antibiotic resistance. Exposure causes resistance.
Removing the stimulus removes the resistance. Preventing antibiotic resistance requires severe restrictions on their use. Many hospitals have developed Antibiotic Stewardship Programs where antibiotic use is monitored for appropriate use only. This preserves the effect of the most powerful antibiotics for life-threatening situations. Unfortunately, the knee-jerk reaction of many doctors to antibiotic resistance is to use more antibiotics to “overcome” the resistance—which backfires. This only creates more resistance.

Resistance to viruses like diphtheria, measles, chicken pox or polio develops from the viral infection itself. Before the development of vaccines, it was popular to hold ‘measles parties’ or ‘pox parties’, where unaffected children would play with a child who was actively infected with measles or chicken pox. Having measles once protects a child for life. Exposure causes resistance.
Vaccines work this exact principle. Edward Jenner, a young doctor working in rural England, heard the common tale of milkmaids developing resistance to the fatal smallpox virus because they had contracted the milder cowpox virus. In 1796, he deliberately infected a young boy with cowpox and observed how he was subsequently protected from smallpox, a similar virus. Through being inoculating with a dead or weakened virus, we build up immunity without actually causing the full disease. In other words, viruses cause viral resistance.

When a drug, such as cocaine is taken for the first time, there is an intense reaction—the “high”. With each subsequent use of the drug, this ‘high’ becomes progressively less intense. Drug abusers may start taking larger doses to achieve the same high. Through exposure to the drug, the body develops resistance to its effects—a condition called tolerance. People can build up resistance to many different types of drugs including narcotics, marijuana, nicotine, caffeine, alcohol, benzodiazepines, and nitroglycerin. Exposure creates resistance.
Removing the stimulus removes the resistance. In order to restore sensitivity of the medication, it is necessary to have a period of low drug use. If you stop drinking alcohol for a year, then the first drink afterwards will have its full effect again.

The prime suspect in causing insulin resistance is insulin itself! 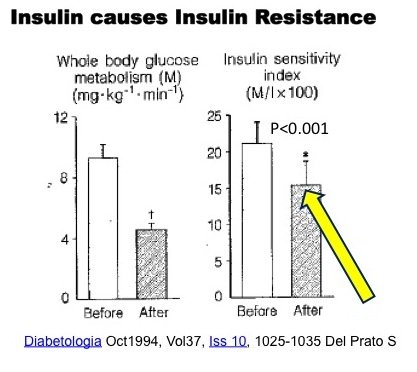 High hormonal levels by themselves cannot cause resistance. Otherwise, we would all quickly develop crippling resistance. We are naturally defended against resistance because we secrete our hormones—cortisol, insulin, growth hormone, parathyroid hormone or any other hormone—in bursts. High levels of hormones are released at specific times to produce a specific effect. Afterwards, the levels quickly drop and stay very low.
Consider the body’s daily circadian rhythm. The hormone melatonin, produced by the pineal gland, is virtually undetectable during the day. As night falls, it increases to peak in the early morning hours. Cortisol levels spike just before we awaken then drop down to low levels. Growth hormone is secreted mostly in deep sleep then drops to undetectable levels during the day. Thyroid-stimulating hormone peaks in early morning. This periodic release is essential in preventing resistance.
Hormone levels usually stay very low. Every so often, a brief pulse of hormone (thyroid, parathyroid, growth, insulin—whatever) comes along to create maximum effect. After it passes, levels are very low again. By cycling between low and high levels, the body never gets a chance to adapt. The brief pulse of hormone is over long before resistance has a chance to develop.
Remember that baby in the quiet room? What our body does, in effect, is to continually keep us in a quiet room. When we are momentarily exposed to a sound, we experience the full effect. We are never have a chance to get accustomed to it—to develop resistance.
High levels alone cannot create resistance. There are two requirements—high hormonal levels and constant stimulus. Consider the experiment described earlier that used constant infusions of insulin. Even healthy young men quickly developed insulin resistance with normal levels of insulin. What changed? The periodic release.
Normally, insulin is released in bursts, preventing the development of insulin resistance. In the experimental condition, the constant bombardment of insulin led the body to down regulate its receptors and develop insulin resistance.

The knee-jerk response to the development of resistance is to increase the dosage. However, this behavior is clearly self-defeating. Since resistance develops in response to high, persistent levels, raising the dose in fact raises resistance. It’s a self-reinforcing cycle—a vicious cycle. Exposure leads to resistance. Resistance leads to higher exposure. And the cycle keeps going around. Using higher doses has a paradoxical effect.
For example, in the case of antibiotic resistance, we respond by using more antibiotic. We use higher doses or newer drugs to try to ‘overcome’ the resistance. And it works, but only for a short while. As more antibiotics are used, more resistance develops. This only leads to even higher doses of antibiotics. In the end, this vicious cycle is self-defeating.
Cocaine addicts know well the response to drug resistance. Each ‘hit’ of cocaine evokes a progressively weaker response as the body becomes resistant to cocaine’s effects. Their knee-jerk reaction is to increase the dose of drugs to maintain the same ‘high’. This works to overcome the resistance but only temporarily. As doses escalate, the resistance becomes more severe. Which leads to even higher dosages, in a vicious cycle.
Alcohol abusers suffer the same vicious cycle. As they develop resistance to alcohol’s effects, they drink more and more to get the same effect. This works to overcome resistance, but only temporarily.
When we yell at somebody for the first time, it has a great effect. As the effect wanes, we yell even louder to overcome this ‘resistance’. This works, but only temporarily. Pretty soon, we are constantly yelling with little effect.
In the same manner, insulin resistance induces the body to produce even more insulin to “overcome” the resistance. But unfortunately, hyperinsulinemia drives itself in a classic self-reinforcing, or vicious cycle. Hyperinsulinemia leads to insulin resistance, which only lead to worsening hyperinsulinemia. This also drives weight gain and obesity.
The cycle keeps going around and around, one element reinforcing the other, until insulin is driven up to extremes. The longer the cycle continues, the worse it becomes—that’s why obesity and insulin resistance are so time dependent. People can be stuck going around this vicious cycle for decades, developing significant insulin resistance. That resistance leads to high insulin levels that are independent of that person’s diet.
But the story gets worse. Insulin resistance, in turn, leads to higher fasting insulin levels. Fasting insulin levels are normally low. Now, instead of starting the day with low insulin after the nightly fast, we are starting with high insulin. The persistence of high insulin levels leads to even more resistance.
Slowly, this idea is gaining widespread acknowledgement. Dr. Barbara Corkey, a researcher at Boston University’s School of Medicine was awarded the 2011 Banting Medal for Scientific Achievement. This is the American Diabetes Associations highest scientific award. In her Banting Lecture, she wrote, “hyperinsulinemia is the root cause of insulin resistance, obesity and diabetes”, with evidence that “hypersecretion of insulin can precede and cause insulin resistance”.
The consequences are dire. The fat get fatter. As insulin resistance becomes a larger and larger part of the problem it can become, in fact, a major driver of high insulin levels. Obesity drives itself.
The hallmark of type 2 diabetes is elevated insulin resistance. By rearranging our diagram, we can see that both obesity and type 2 diabetes are manifestations of the same underlying problem – hyperinsulinemia. Their close relationship has given rise to the term ‘diabesity’ which implicitly acknowledge that they are in fact, one and the same disease.
Obesity does not cause type 2 diabetes. That is the reason that researcher have been unable to find the causative link despite intensive research efforts. Instead, both diseases were caused by a single factor – hyperinsulinemia. It appears that we may have just found Dr. Reaven’s mysterious ‘X’ factor.