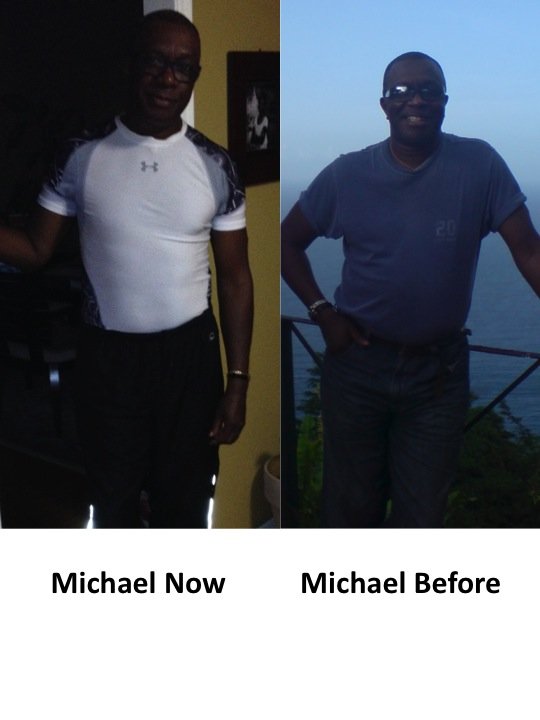 Michael was diagnosed with type 2 diabetes in 2000. Like most people Michael thought his diabetes was a chronic illness that would become worse with age. In 2007, Michael began seeing Dr. Fung for management of his diabetic related kidney disease.   During his follow-up visit with Dr. Fung in October 2013, Dr. Fung approached Michael about joining the IDM Program. Although he was taking three oral medications for management of his diabetes, his HbA1c was 8.6%. The next step for Michael was insulin.
Fortunately, Michael was willing to give the program a shot. He was able to come off of all of his diabetic medications within 3 months of starting, and his HbA1c is now 5.8%. In addition to developing some kidney disease, Michael has also developed some fatty liver disease from the diabetes. His ALT (liver enzyme) has decreased to 32 U/L (normal) from 45 U/L (abnormal). Michael has also lost 14 pounds and 3 inches around his waist.
The following is an interview with Michael.

IDM: What was your initial reaction when Dr. Fung asked you to fast on alternate days when you first joined the program?

I thought it was going to be really hard but at that point I was willing to try anything. The reason why I thought it was going to be difficult was because before I started on this program I could barely go an hour or so without eating. I was constantly eating, because I thought I would be very sick if I didn’t eat. I really didn’t think it was going to be possible to fast, but I think it is mostly a mindset. I was really scared when Dr. Fung told me the next step for me was going to be insulin to manage my diabetes. I just didn’t want to go there at all. I had my mindset on doing whatever I had to do to stay off of insulin. I just went with it, and I was able to do it.

IDM: How have you felt since you started following along with the program?

I feel really good. My energy levels have improved. I was sleepy all of the time before, but now I have energy. I feel good all over. My blood sugar levels have been very good. My skin texture has also changed. It isn’t wrinkly anymore. People who I haven’t seen for awhile say I have a glow now.

IDM: Did you experience any other complications following along with the program?

When I first started it was difficult because I had quite a bit of gas pain. When I spoke to you guys about it, you told me to drink mineral water. That helped a lot.   After that I didn’t really have any problems with it.

I also thought it was a little difficult to eat. At first I was eating the same foods over and over again. It became a little boring at the beginning because I had to stop a lot of the foods I normally ate. I had to stop the bread and all of the flours and pasta. There wasn’t much left in my old diet.   I had to start trying different things that I wasn’t use to. Now the foods I never liked, I crave now. Things like vegetables or salads. There are so many different things you can do with them to keep your meals interesting, so I eat a lot of them now.

When I feel hungry during a fast I drink a lot of water, tea and coffee. They fill me up. Those were things I never used to do before. Once in awhile you get a craving. It doesn’t matter what you eat, you still crave that one thing. One time I was craving a burger so badly, so I went for it. The craving went away after that. I could only eat half of it though because nowadays it doesn’t take too much food to fill me up. I have found that my stomach has shrunk. I can’t eat as much as I used to even when I allow myself to indulge.

IDM: Last year you went on vacation for 3 months.   What did you do in terms of your diet while you were away to maintain all of the progress you made before your holiday?

I pretty much stayed on the program for the whole time I was gone. It was something I wanted to continue to do. I look at the fasting as something for my health.   Staying on track was all to benefit myself. There were sometimes I would go off for the diet for a bit, but I always went right back.

IDM: What advice would you give to new patients joining the program who are leery about the fasting?

Stick with it. Get on the program and stay with it. For me the guidelines are not written in stone. You can tweak your schedule until you get to your goal. At first, I would fast the whole day until 6:00 or 7:00 PM until my system got used to it. Now I can go the whole day without that meal in the evening without a problem. I think it is a great program. It really works.

The most important thing to keep in mind is that this is not a diet or a even program really. I look at it as a way of life. You have to alter your lifestyle. I don’t need to eat everything I see out there. I don’t crave all of these carbohydrates anymore. If you give up a few things, then you get to live a lot longer.

IDM: Did you ever think you could reverse your diabetes?

No. Everyone says once you get it you have it for the rest of your life. I went along with Dr. Fung at first when he said it could be reversed, but there was doubt until I started seeing improvements. My medication kept being reduced because my blood sugar levels started coming back down to normal.

We would like to thank Michael for sharing his story for our Patient Profile this month.  He has had tremendous success following the IDM program as a direct result of his continued dedication towards achieving a healthier lifestyle.  We are very happy to have him as part of our IDM family.