This week I’d like to discuss type 2 diabetes (T2D) and inflammation. Usually I try to follow topics sequentially, but I was reviewing an article about type 2 diabetes and inflammation and thought it was quite interesting. The results of a large trial (TECOS) were released in June 2015 and illustrates once again the futility of targeting blood sugars in the treatment of T2D. This got me thinking about T2D again. So apologies, but we’ll start this series in the middle of the story.
As a background, you can view some of my online lectures, including “The Two Big Lies of Type 2 Diabetes“, “How to Reverse Type 2 Diabetes Naturally“, and “The Perfect Treatment for T2D“. 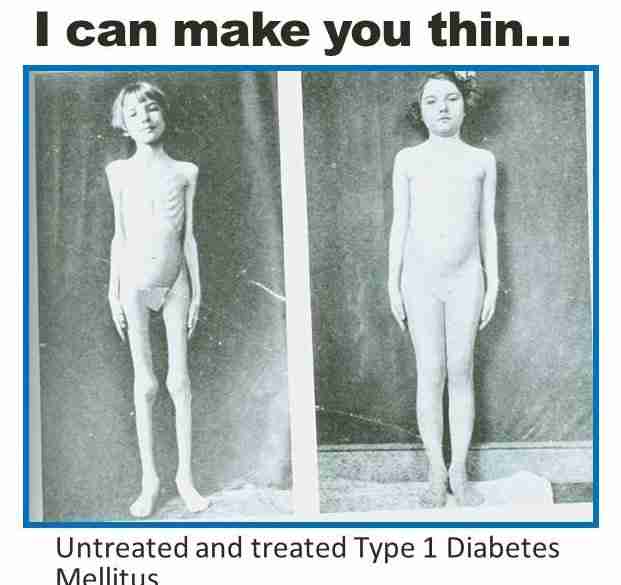 Essentially, I think that the current treatment of type 2 diabetes (T2D) is entirely incorrect. I think that we are simply treating the symptom rather than the disease. Let me explain. In type 1 diabetes, there is destruction of the insulin producing cells of the pancreas for reasons that are still largely unknown. This lack of insulin results in high blood glucose (BG) levels which cause various symptoms. Untreated, this is a fatal disease.
The severe lack of insulin causes severe weight loss. No amount of caloric intake will be able to stimulate insulin and weight drops off rapidly and fatally. Insulin reverses this disease. This makes sense. The disease is lack of insulin. The treatment is replacement of insulin.
However, T2D is an entirely different disease. When researchers first measured insulin levels in T2D, they also expected levels to be very low, but instead they were very high. The disease is actually one of too much insulin resistance (IR). That is, there is plenty of insulin, but the insulin doesn’t really work very well. This has often been compared to a lock and key. In T1D, there are no keys (insulin) available to open the lock (insulin receptor). Therefore, the logical treatment is to give insulin (key).
However, in T2D, the key (insulin)ndoes not really fit the lock (receptor) very well. The body responds by making more keys, but the underlying problem is not the key, but the fact that the lock is damaged. In this situation, it would make sense to fix the lock since that is the problem. However, our current approach to the treatment of T2D, endorsed by all the major diabetes associations is to give more insulin. So, the key does not fit very well, so let’s make more keys! Wouldn’t it make more sense to fix the lock?
But anywho, that’s what we do. When somebody has high blood sugars due to IR, we give more insulin instead of trying to fix the IR. The high blood sugar is the symptom of the disease (high IR). Instead of fixing the disease, we fix the symptom (high blood sugar). Yet somehow, we are surprised when fixing the symptom provides no lasting benefit.
For years, it was assumed that that tight BG control would reduce the complications of T2D. However, around 2008, four major trials (ACCORD, ADVANCE, VADT, and ORIGIN) were published. All were hugely expensive trials designed to apply the gold standard (randomized double blind controlled trials) to the question of whether lowering blood sugars would reduce cardiovascular disease. After all, most diabetics die of CV disease and therefore, any strategy that reduced CV disease would be important.
We will review these trials in more detail later, but the bottom line was that lowering blood sugars did NOT reduce CV disease or death. This was a major problem. All of the current treatments of T2D are based on the underlying assumption that tight glucose control was beneficial. But all these trials agreed. There was no benefit.
Looking back, it seems quite obvious. The disease is about too much insulin resistance. However, our treatment is to lower blood sugar and ignore the insulin resistance. Since we are not actually treating the disease, but instead treating the symptoms, it seems obvious why these therapies did not work.
For example, suppose you have an infection caused by a bacteria (cause of disease). This infection causes a fever (symptom). In order to cure the disease, you use antibiotics to kill the bacteria. If, instead, you treat the symptom of fever with acetaminophen, then there is no benefit. In T2D, the situation is the same. The disease (insulin resistance) is untreated while we focus on the symptom (blood sugars). The high blood sugars were in fact caused by the IR.
So here the situation. Doctors were using treatments that were now proven to be ineffective. We could either change our treatments, or simply ignore the studies (all four of them). This is cognitive dissonance at its finest. However, rather than learn our hard (and expensive) lessons and try to focus on treating IR, medical professionals instead chose to ignore the studies. There was simply too much money and too many academic careers built on treating blood sugars.

So, why is treating blood sugars so ineffective for CV disease (atherosclerosis)?
Inflammation is a key component of much of the damage done to our bodies during the process of atherosclerosis. It has long been recognized that the process of narrowing and hardening of the arteries (called arteriosclerosis or atherosclerosis) is not so simple as cholesterol in the blood clogging up the artery like sludge in a pipe. Even 25 years ago, when I went to medical school, it was well known that inflammation played a key role. Atherosclerosis is process that initiates and propagates as a response to injury. Inflammation is part of what causes that injury.
As the blood vessel becomes injured, especially where they branch off, a cascade of events is triggered. Smooth muscle cells proliferate and move into the plaque (narrowed area). White cells in the blood attach to the lining (endothelium) and move into the plaque and proliferate. Multiple inflammatory mediators (IL-1, cytokines, growth factors etc.) are involved at all stages.
So, inflammation plays a key role in atherosclerosis and all its diseases (heart attack, stroke) and reducing inflammation is good. In order for a treatment to provide health benefits, it would be important to lower inflammation. Does lowering blood sugars lower inflammation?
This brings us to the LANCET trial, published in 2009 in the Journal of the American Medical Association. In this trial, researchers studied inflammatory markers hsCRP (high resolution C-Reactive Protein), IL-6 (Interleukin 6) and sTNFr2 (soluble timor necrosis factor receptor 2).  These are all markers that predict incident heart attacks and stroke. So, if lowering blood sugars was going to be beneficial, then you might expect that it would need to reduce inflammation to do so.

The point of this study was to see if insulin or metformin would reduce inflammation. This was a randomized controlled study of four groups – placebo, metformin, insulin or both with a total of 500 patients. Certainly, those drugs were able to lower blood sugars. That’s to be expected. That what they were designed for. However, does lowering blood sugars result in lower inflammation? Yeah, not so much. 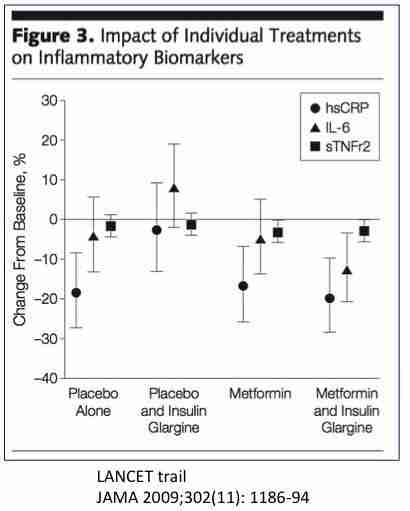 Inflammatory markers were essentially unchanged despite the better sugar control. The exception is insulin treatment alone. It tends to increase hsCRP and IL-6. Yeah, that’s bad.
We want to lower inflammation, not raise it. Insulin makes thing worse, not better. That’s what we argued in a previous post – insulin causes insulin resistance. Therefore, treatment with insulin would be expected to make blood sugars (symptom) better, but make the diabetes worse.
So now we can understand a little bit better the results of the ACCORD, ADVANCE, VADT and ORIGIN trials. All these trials were aimed at treating symptoms and not diseases. They treated the high blood sugar, but not the underlying insulin resistance.
Since atherosclerosis is an inflammatory disease, any treatment that may be potentially effective should somehow also reduce inflammation. Yet neither insulin nor metformin is able to lower inflammation. They can’t fight the fire, so to speak (inflammation is sometimes call ‘the fire within’). Therefore neither insulin nor metformin was able to reduce the incidence of heart disease or stroke. Similarly, these treatments were not able to affect the underlying inflammatory cascade that is so damaging to the human body. In short – these treatments are virtually useless. It is like treating a life-threatening infection with Tylenol. Unfortunately, 99% of type 2 diabetes treatment is currently aimed at reducing blood sugars, including all the major current diabetes guidelines, even though this strategy has been proven to be useless over and over and over and over.
Why? Why, you may ask? Well, nobody makes any $$$ when you get better, do they?
Start here with “My Journey”
Continue to T2D 2 – The Biggest Lie