The Citric Acid Cycle – The biochemistry of insulin resistance

I’ve talked about insulin resistance many times previously (and in The Diabetes Code) and how a fundamental mis-understanding of it using the ‘lock and key’ paradigm has set the stage for our current failure to treat type 2 diabetes. Rather than insulin resistance being a paradigm of ‘internal starvation’, it should really be considered a paradigm of overflow. 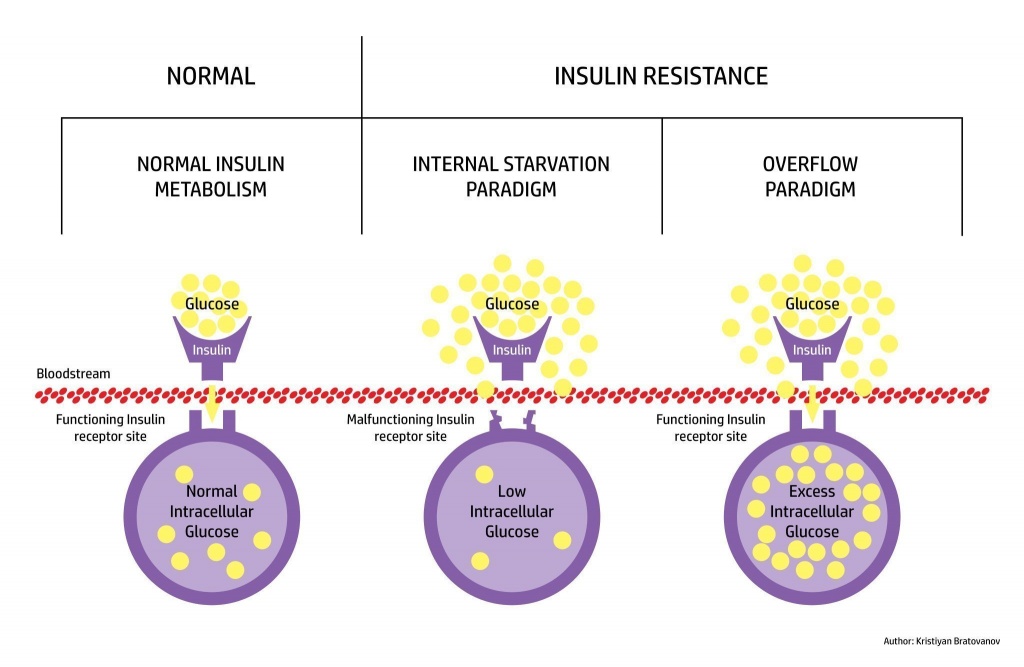 If you have an excess of intra-cellular glucose, the liver will try to decompress itself by turning it into fat. It exports this fat as VLDL leading to high triglycerides, low HDL and this fat will deposit in other visceral organs leading to fatty liver, fatty pancreas, and abdominal obesity. What’s the biochemical mechanism behind this? How does an overloaded cell block glucose entry into the cell? For this we need to discuss the citric acid cycle. (Warning: This discussion assumes some basic knowledge of biochemistry) 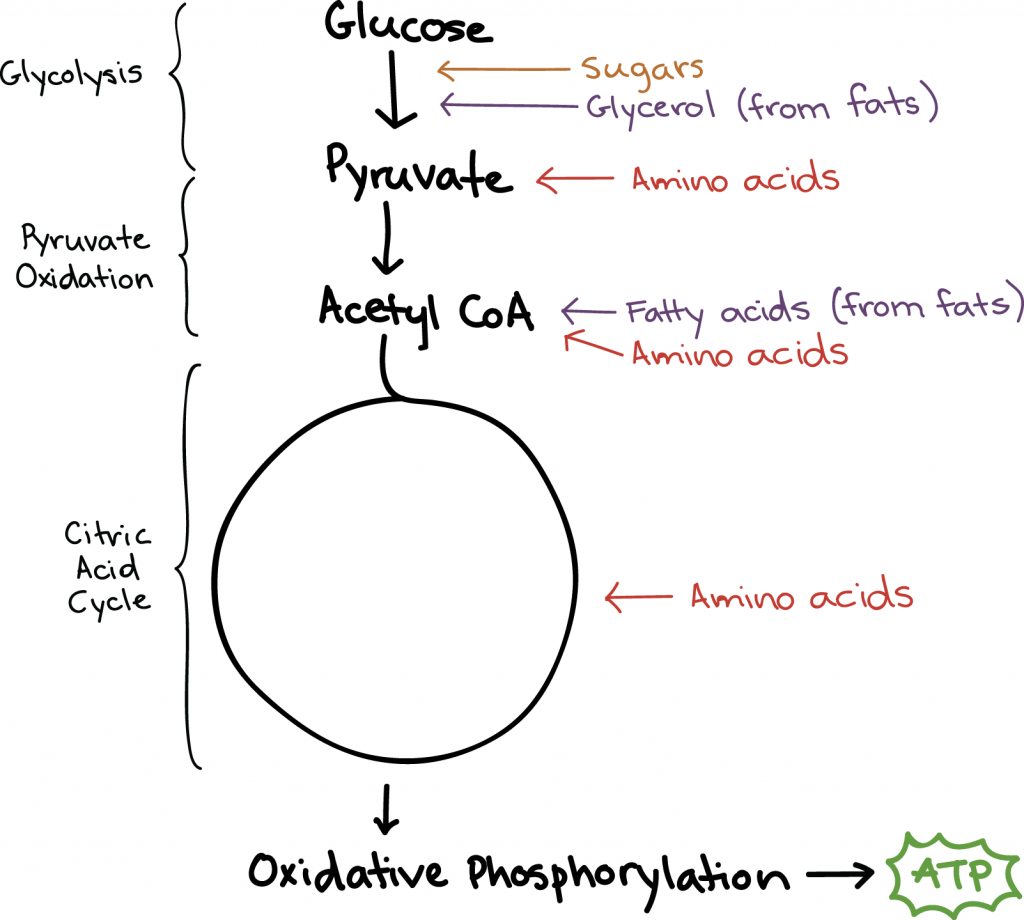 When we eat, we consume a blend of three macronutrients – carbohydrates, proteins and fats. No matter what macronutrients go in, we want the same output – cellular energy in the form of ATP. Proteins, broken down into their component amino acids, are not purely used for energy, and are used as building blocks for new proteins. There are some essential fatty acids, too, but for the most part, dietary fat and carbohydrates are mainly useful as sources of energy. So we have 3 inputs (carbs, amino acids, and fats) and 1 output – cellular ATP. How does our body metabolize food into ATP? That’s the job of the citric acid cycle (also called the tricarboxylic acid or TCA Cycle).
The TCA cycle, which takes place inside the organelle known as the mitochondrion is pictured on the right. Glucose is first changed into pyruvate through the process of glycolysis (literally – the breaking down of glucose). Under anaerobic conditions, this can be used as a source of energy, with the end result being the production of lactic acid. But under normal aerobic conditions, it undergoes further pyruvate oxidation into Acetyl CoA. This can then undergo the TCA Cycle which generates the NADH and FADH2 necessary for the cell to undergo oxidative phosphorylation.
Each cycle of the TCA cycle regenerates the original substrate oxaloacetate so that it may continue running. Each Acetyl CoA provides 2 carbons, which get turned into carbon dioxide, but in the process generate 3 NADH and 1 FADH2, along with an ATP or GTP. So there’s not a whole lot of ATP generated with the TCA cycle directly. But indirectly, you can continue onto oxidative phosphorylation to generate 36 ATP per glucose, which requires the NADH and FADH2 for the electron transport chain. 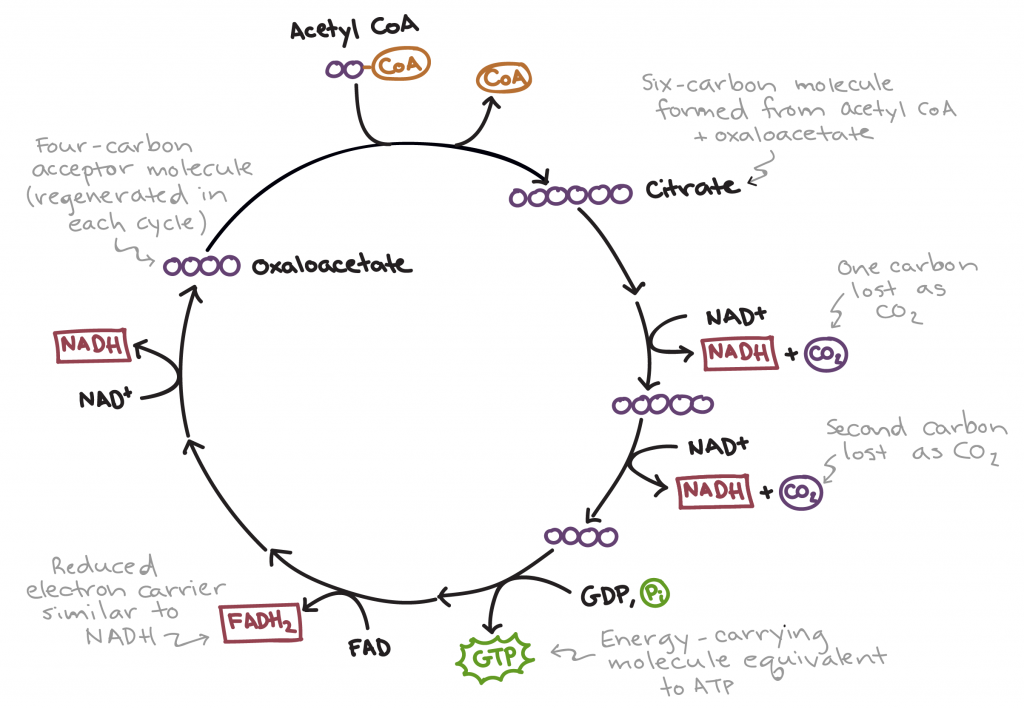 Other than glucose, there are other places that amino acids and fatty acids may enter this cycle to ultimately produce ATP. This is how all foods may ultimately be turned into cellular ATP. Amino acids are generally not used for energy, but if in excess, they can have their amino groups removed, making ammonia (NH3) as a waste product, which is then turned into NH4+ and excreted in the urine. Different amino acids enter at different points in the cycle. For example, glutamate enters the cycle as alpha ketoglutarate.
Fat (triglycerides) are broken into glycerol and their fatty acid chains. Glycerol enters similar to glucose. Fatty acids are broken down by beta oxidation and combine with CoA to form acetyl CoA, allowing it to enter the TCA cycle smoothly.
But what happens in the case that there is too much ATP? Consider an analogous situation. Suppose that you normally buy gasoline to power your car. You drive to and from work everyday and you need about 50 liters or about 13 gallons each and every week. All of a sudden, instead of buying 50 L, you get 200 L per week. At first, you store some of the excess in your gas tank. When that gets full, you buy some jerry cans to store the extra. After that, it gets dangerous. All that excess gasoline is now sloshing around and pretty soon it’s going to explode like in a Tom Cruise Hollywood action movie. 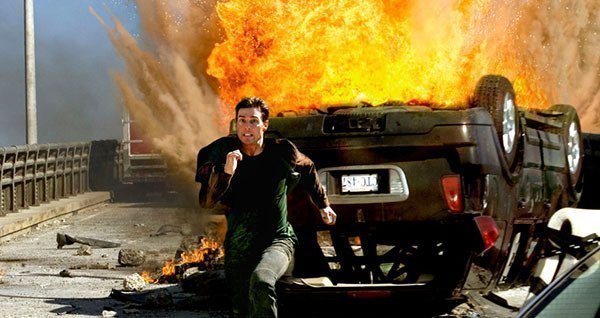 Inside the cell, there is only so much ATP that it can hold. Once these stores are full, it cannot hold any more. The logical action is to stop putting more gas in the tank. For the cell, this means that it must stop the inflow of nutrients into the cell.
The cell does this through a negative feedback loop. When there is too much ATP, the ATP itself, as well as some of the intermediates acts upon the entire process to slow it down. In your gas tank, when you are pumping gas, when it gets full, the pump will automatically stop so that you don’t spill gasoline everywhere. The cell does the same thing. 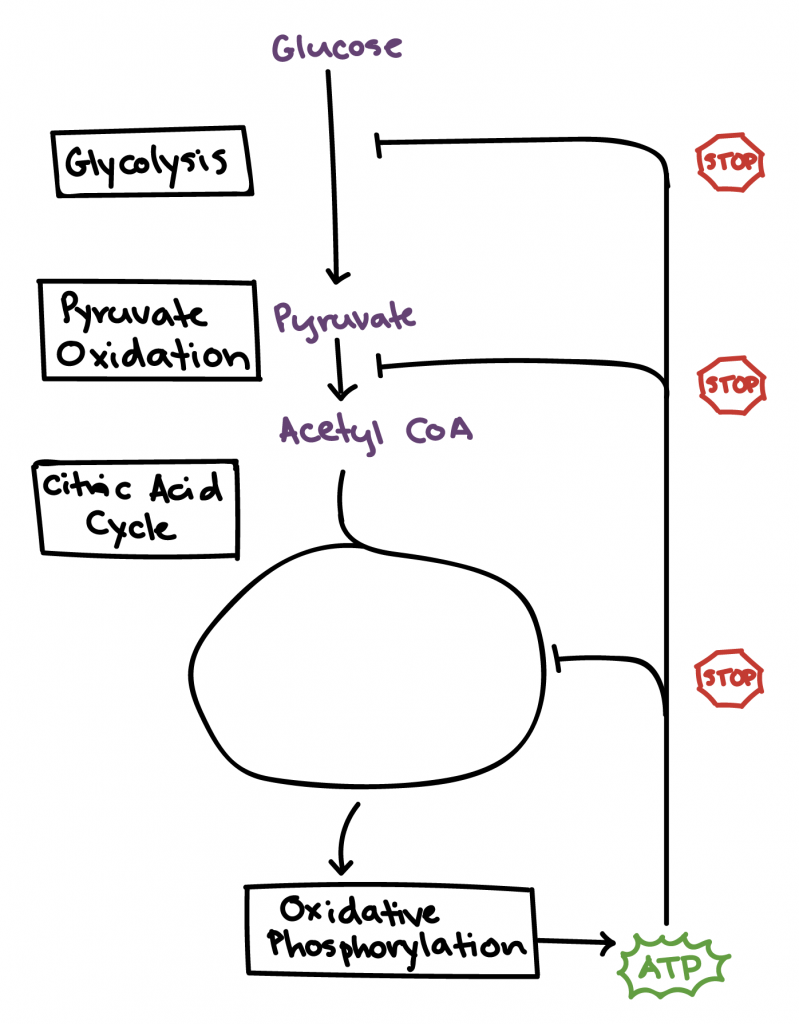 When the cell notices an excess of ATP, it then puts the brakes on the whole system. ATP will directly inhibit glycolysis, pyruvate oxidation and the citric acid cycle in a desperate effort to slow down cellular production of ATP to avoid the ‘car exploding’ scenario.
Specifically, ATP and citrate (remember this is one of the key molecules produced by the citric acid cycle) will inhibit the enzyme phosphofructokinase (PFK), which blocks the conversion of glucose to pyruvate, the first step in the chain. ATP also acts blocks the action of pyruvate dehydrogenase (PDH) to block the conversion of pyruvate to Acetyl CoA, the second step in the chain. ATP then acts at multiple sites within the TCA cycle to stop its own production.
This is a fantastically elegant system that ensures that ATP is produced when needed, but never to excess. When this process grinds to a halt, glucose being at the very top of the chain, backs up. This slows down production of ATP and restores the system to normal. But what if we keep feeding glucose into the system?
As glucose increases within the cells, there is less and less of a concentration gradient for glucose to flow from outside to inside the cell. Remember that insulin opens a gate for glucose to enter. Normally, the glucose concentration outside the cell is higher than that inside the cell, and therefore will flow inside following its concentration gradient. If this gradient is minimized or eliminated, insulin has a harder and harder time pushing glucose inside the cell, and hence you see the glucose levels in the blood outside rise, leading to the term ‘insulin resistance’. But this is not a lock and key problem. It’s an overflow situation. The underlying problem of ‘insulin resistance’ as commonly used comes down to two simple things – too much glucose, which leads to  too much insulin. 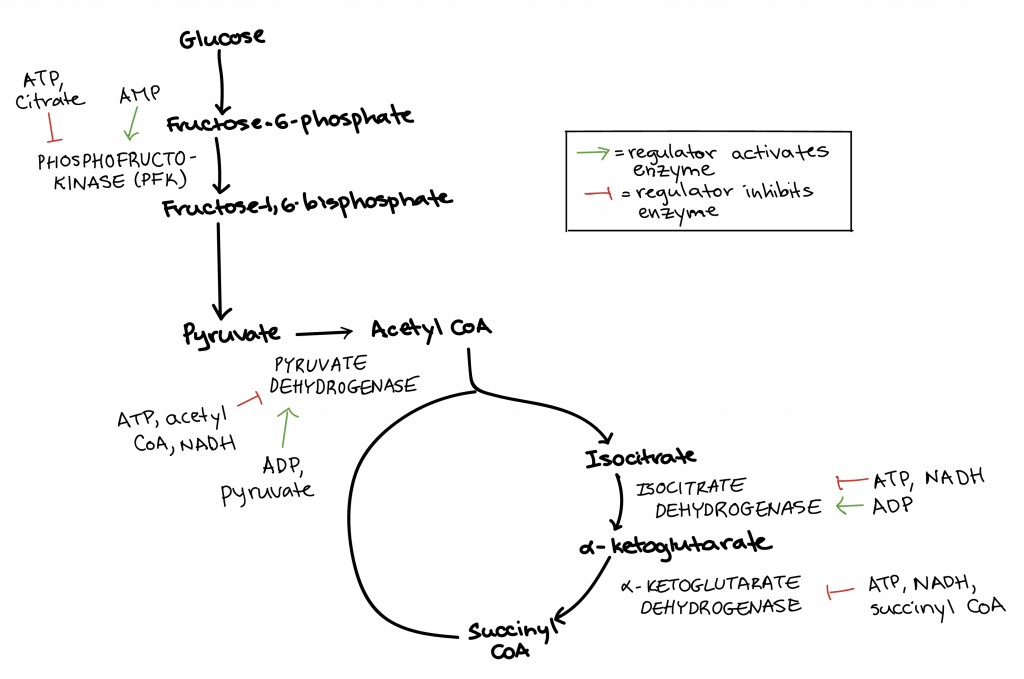 The solution, therefore, is rather simple and only consists of two things.

You’ll also note that ‘insulin resistance’ while carbohydrate dominated, can also be activated through, for example, too much fat (triglycerides). Any macronutrient may produce ATP, which will overload the system and cause glucose to back up. Proteins and fats, however, are more difficult to overeat, because they naturally activate satiety hormones that prevent this exact situation. The logical solution? Fasting. Boom.