Insulin Toxicity
The rosiglitazone debacle and the shocking 22% increased risk of death found in the ACCORD study focused researchers on the potentially harmful effects of some of these blood glucose lowering medications. Insulin was the oldest and most powerful and the time had come to consider the paradigm of insulin toxicity.
Making the diagnosis of hyperinsulinemia has always been problematic for several reasons. Insulin levels vary widely throughout the day and in response to different foods. Release of insulin, like all hormones, is pulsatile, meaning that two measurements may widely differ even if taken within minutes of each other. A fasting insulin level solves some of these problems, but it varies widely between people and tends to reflect underlying insulin resistance.
Hyperinsulinemia had been considered a potential problem even as far back as 1924. As insulin assays became available in the 1960’s it was clear that insulin resistance and hyperinsulinemia were closely associated. It has long been assumed that insulin resistance provokes the hyperinsulinemia, but the reverse is also true – hyperinsulinemia may cause insulin resistance.
Recently, more data has become available to substantiate these concerns. Once researchers started to look, the evidence that hyperinsulinemia was a problem was everywhere. It has been strongly associated with cancer, heart disease, stroke, type 2 diabetes, metabolic syndrome, non-alcoholic fatty liver, obesity and Alzheimer’s dementia.
Insulin Resistance
Ectopic fat, the accumulation of fat in places other than fat cells, plays a critical role in the development of insulin resistance. Fatty liver contributes to hepatic insulin resistance, and fatty muscle contributes to insulin resistance in the muscles. Even in the presence of severe obesity, insulin resistance does not develop in the absence of ectopic fat accumulation. This explains how an estimated 20% of obese individuals may have no insulin resistance and normal metabolic profiles.
A hypothesis first proposed in the 1950’s by Jean Vague, visceral, or central obesity is more metabolically damaging. Since then, many studies have confirmed this hypothesis. Thus, abdominal obesity rather than body mass index forms part of the criteria for metabolic syndrome. Thus, normal weight subjects may develop type 2 diabetes if the fat is deposited in the organs instead of in the fat cells.
In the absence of insulin, these ectopic fat deposits, and hence the insulin resistance cannot develop. Indeed, accumulated fat deposits melt away under conditions of sustained low insulin levels. Insulin is required to convert excess calories to fat and also to sustain it as fat.
As previously discussed, hyperinsulinemia underlies all of the metabolic syndrome and its consequences and forms a large portion of the toxicity of insulin.
Atherosclerosis 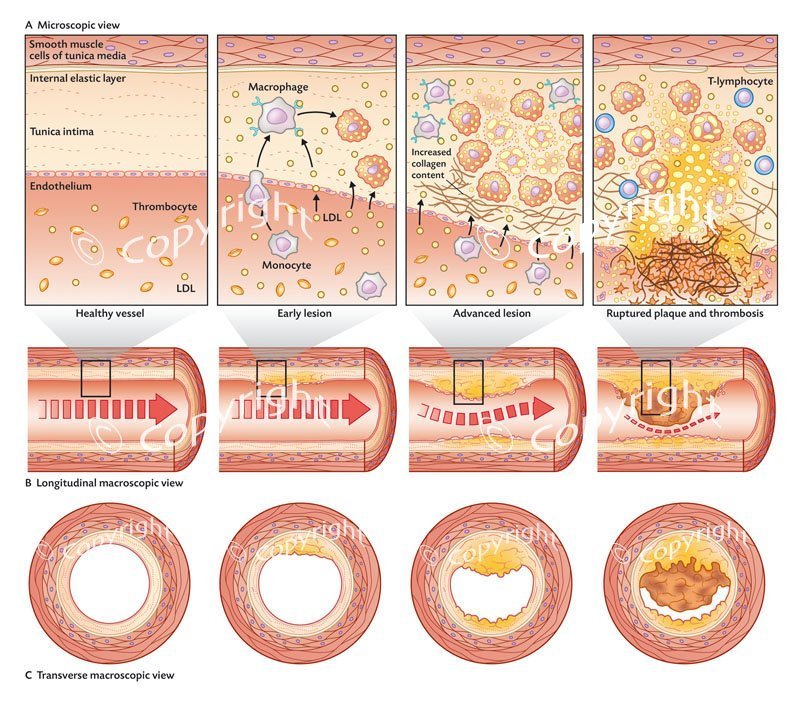 Atherosclerosis, sometimes called ‘hardening of the arteries’ is the precursor to heart attacks, strokes, and peripheral vascular disease. Since the earliest days of insulin treatment, it has been noted that it has been linked to the development of atherosclerosis. Animal studies had demonstrated as early as the 1949 that insulin treatment cause early atherosclerosis, which could be reversed by preventing the excessive insulin.
Atherosclerosis is an inflammatory process that develops through several stages – initiation, inflammation, foam cell formation, fibrous plaque formation and then advanced lesions. Insulin facilitates atherosclerosis along every step of this pathway. Furthermore, insulin receptors are found inside human plaque and experimentally, insulin stimulates the growth of plaque, contributing to the progression of atherosclerosis.
Cardiovascular Disease
Concerns about insulin toxicity are not new. In 1970, the UGDP raised concerns that sulphonylurea medications, which stimulate insulin production, increased risk of cardiovascular disease. This led the Federal Drug Administration to issue a warning about this potential increase in cardiovascular deaths. However, since therapeutic options were limited at the time, SUs became widely prescribed for treatment despite these reservations.
The Quebec Cardiovascular Study established hyperinsulinemia as a known risk factor for heart disease as early as 1996, although this was felt to reflect the underlying insulin resistance and largely ignored. However, the evidence that insulin toxicity was a factor continued to accumulate, particularly in the treatment of type 2 diabetes, where treatment doses were sometimes high.
Reviewing over 12,000 newly diagnosed diabetic patients in Saskatchewan from 1991 to 1996, researchers found was a ‘significant and graded association between mortality risk and insulin exposure level”, even after adjustment for other factors. Simply put, the higher the insulin dose, the higher the risk of dying. It wasn’t a trivial effect, either. The high-insulin group had a 279% higher risk of death compared to those that did not use insulin.
British researchers soon found similar results. The UK General Practice Database from year 2000-2010, which contained medical records of over 10 million people, identified over 84,000 newly diagnosed diabetics. Compared to metformin treatment, the use of SU was associated with a 75% higher risk of death. Insulin was even worse, more than doubling the risk. The same held true for heart attacks, strokes, cancer and kidney disease.
Newly diagnosed diabetics in The Health Information Network (THIN) group doubled their risk of cardiovascular disease with the use of insulin and risk increased by 55% with SUs. With increasing duration of treatment, risk increased in lockstep.
In patients not taking medications, a lower A1C is clearly associated with less risk of heart attack and death. Insulin is a powerful blood glucose lowering medication. Its usefulness assumed that this would protect organs, but this was not really true.
Real world records from the the United Kingdom General Practice Research Database from 1986 to 2008, identified over 20,000 patients who had added insulin to their diabetes medication. Patients with the lowest A1C expected the best survival, but the exact opposite was true!
Patients with the ‘best’ blood glucose control had the worst outcomes. Patients achieving an A1C of 6.0%, considered ‘excellent’ control, fared just as poorly as those patients with an A1C of 10.5%, considered ‘uncontrolled’ diabetes. The glucotoxicity paradigm utterly failed to explain this phenomenon. If most of the damage from diabetes was being caused by the high blood glucose, then those with the lowest A1C should have the best outcomes. But they did not.
This was not an isolated finding as study after study showed the same results. A 2011 study confirmed that both low and high blood glucose carried excess risk of death and insulin use was associated with a mind-boggling increased 265% risk of death.
A Cardiff University study reviewed data from almost 10% of the UK population from 2004-2015 and found that lower A1C was associated with elevated mortality risk, driven mainly by a 53% increased risk with the use of insulin. In fact, in this study, no other medication increased the risk of death. 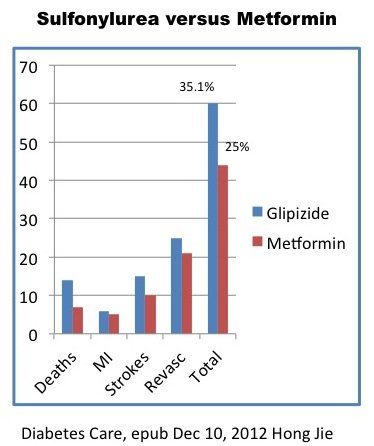 Metformin is the standard first line medication for type 2 diabetes. Adding insulin, compared to SUs increased the risk of heart disease or death by 30%. In a Dutch database, high daily insulin doses were associated with three times the high cardiovascular risk. In heart failure patients, insulin use is associated with more than four times the risk of death.
Metformin versus SU
Both metformin and SUs effectively control blood glucose, but they differ in one important respect. SUs increase the body’s secretion of insulin, where metformin does not. Is this important?
The Veteran Affairs database in the United States contained over 250,000 newly diagnosed type 2 diabetics. Starting treatment with SUs had a 21% higher risk of cardiovascular disease compared to metformin. The UKPDS had also showed that metformin is particularly beneficial in obese type 2 diabetic patients compared to insulin or SU. Other studies estimated the use of SUs increased the risk of heart attack or death by 40-60%.
The experience in the United Kingdom was no different, where the use of SUs increased the risk of heart attack or death by a disconcerting 40%. Furthermore, these risks increased in a dose dependent manner. Simply put, the higher the dose of SU, the greater the risk.
These results were finally confirmed in a 2012 randomized, controlled trial, the gold standard of evidence based medicine. Initial therapy with SU increased vascular disease risk by 40% despite equal blood glucose control. This agreed perfectly with the earlier estimates. Cardiovascular disease is by far the leading cause of death in type 2 diabetes, so the importance of this study cannot be underestimated. Two drugs, controlling blood glucose equally could have widely divergent effects on cardiovascular health. The main difference? One stimulated insulin and caused weight gain, where the other did not.
Excessive insulin is toxic, particularly in a setting of type 2 diabetes, where baseline insulin is already very high. With hindsight, this problem becomes perfectly obvious. The high blood glucose was only a symptom of the underlying disease of type 2 diabetes, which is characterized by hyperinsulinemia and insulin resistance. Giving more insulin will lower the blood glucose, but worsen the underlying hyperinsulinemia.
Giving more insulin successfully masked the hyperglycemia, but worsen the hyperinsulinemia. We were treating only the symptoms but not the actual disease. We were pretending that the symptom was the actual disease. 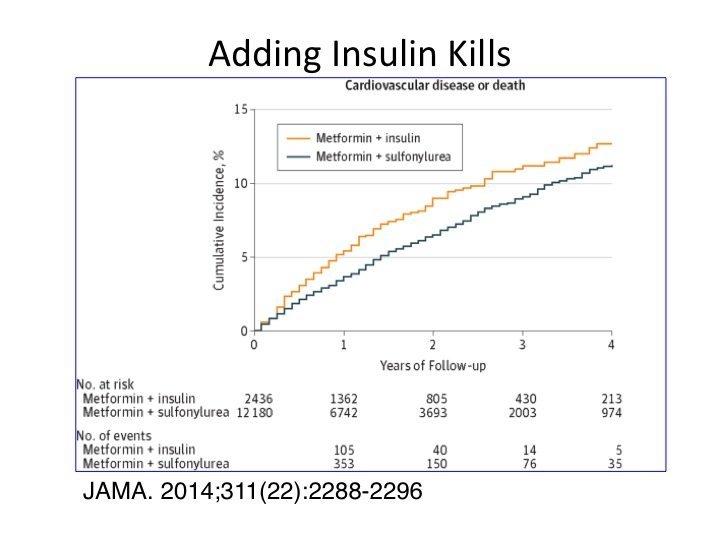 The situation is analogous to alcoholism. Patients with alcohol dependence often develop severe withdrawal symptoms upon abstinence. This syndrome, called delirium tremens includes tremor and even generalized confusion.
Giving alcohol can effectively reduce the symptoms. However, the underlying disease of alcoholism is not improved, but actually made worse. You can’t treat alcoholism with alcohol and expect positive results. In the same manner, you can’t treat hyperinsulinemia with insulin.
Cancer
The association between diabetes and risk of cancer has been well established. Diabetics are at increased risk of many different cancer types, including all the most common ones such as breast, colon, endometrial, kidney and bladder cancer. Obesity, pre-diabetes and type 2 diabetes are all associated with increased risk of cancer suggesting that factors other than the increased blood glucose plays a major role in the development of cancers.
All three conditions are linked by the presence of hyperinsulinemia and insulin resistance. Insulin is a well-known growth factor that induces cells to undergo division, which drives tumor growth. For example, women with the highest insulin levels carry a 2.4 fold higher risk of breast cancer. Obesity itself may play a role, but hyperinsulinemia is associated with increased risk of cancer, regardless of weight status. Lean and overweight women, when matched for insulin level, exhibit the same risk of breast cancer.
Single gene mutations that increased insulin effect significantly raise the risk of cancer. Pioglitazone, a drug that increased insulin effect was linked to increased incidence of bladder cancer.
The choice of diabetic drug treatment significantly influences the risk of cancer, reaffirming the large role of hyperinsulinemia. Insulin use raises the risk of colon cancer by approximately 20% per year of therapy. A review of the UK General Practice database revealed that, compared to metformin, insulin increased the risk of cancer by 42%, and SUs by 36%. A review of the 10,309 newly diagnosed diabetics in the Saskatchewan population disclosed that use of insulin increased risk of cancer by 90% and SUs by 30%.
Once cancer has been established, the high blood glucose can enable faster growth Cancer cells are known to be glucose avid, with limited metabolic flexibility in using other fuels such as free fatty acids when glucose supplies are low. Cancer cells are highly metabolically active, requiring large supplies of glucose to proliferate.
Conclusions
According to the Center for Disease Control, in the year 2013, the top three causes of death in the United States were:

Heart disease and cancer far outpace all other causes of death by a wide margin. They are linked in one significant way. Hyperinsulinemia and insulin toxicity.