We’ve reviewed how the hormone insulin (and cortisol) leads to weight gain.  However, what increases insulin?  This is where the carbohydrate-insulin hypothesis falls short.
It may be helpful to review normal insulin action, since we will be talking about it – a lot.  Insulin is a hormone that is released in response to food.  Certain foods, particularly the refined carbohydrates tend to increase the insulin levels more than others.  However, protein will also increase insulin levels as well.  Dietary fats, on the other hand, tend to have the least effect of increasing blood sugars and insulin levels.
As we eat, blood sugars go up and we release insulin.  When we eat a meal, we are ingesting much more food energy than we can use immediately.  Insulin tells our body to move this flood of glucose out of the bloodstream and into storage for use later on.  One of the ways our body can store this sugar is glycogen in the liver.  Our body can convert glucose to glycogen to glucose and back again quite easily.
But there is a limited amount of glycogen that can be stored in the liver.  After that, any excess carbohydrates will be turned into fat. Fat is harder to access but in unlimited supply.  In effect, insulin is one of the prime hormones promoting fat storage.  There are several different areas where fat accumulates – subcutaneous (under the skin) and visceral (organ) fat.  It is the visceral fat that tends to be more of a problem.
Glycogen is like your wallet.  You put money in and take money out all the time.  It is easily accessed but you can only hold a limited amount.  Fat is like your bank account.  It is harder to get access to that money, but there is an unlimited storage space. 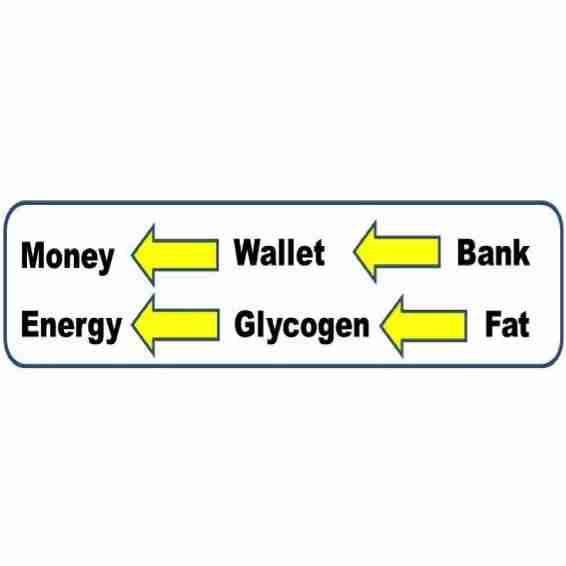 This, of course, explains partially the difficulty in losing the fat accumulated over the years.  Since access to this space is limited, it can be difficult to burn fat.  To get at the money in the Bank, you need to deplete the Wallet first.  You can only access the Fat when the Glycogen is depleted.  But you don’t like an empty wallet even if your bank is full.  You also don’t like an empty glycogen tank even if the fat bank is full.
This fat storage process is entirely normal.  We eat.  Insulin goes up.  Insulin stores sugar as glycogen in the liver.  Insulin also turns on fat production in the liver.  The technical term is hepatic de novo lipogenesis (DNL).
This newly synthesized fat has 3 possible fates.  It can be oxidized for energy.  Since insulin is signalling that we already have lots of energy, this doesn’t happent.
Second, the liver can export this fat elsewhere in the body.  It can be sent to other organs (pancreas), be stored as visceral fat (around organs) or subcutaneous (underneath the skin).  Third, the fat can be stored in the liver.
Insulin is also responsible for turning off the conversion of glycogen to sugar.  In technical terms,  insulin suppresses gluconeogenesis (new glucose production in the liver).  Since insulin tells the body to store sugar, you want to turn off the sugar burning process.  Makes perfect sense.
After you have finished digesting the meal, then blood sugars start to drop and insulin levels also drop.  This is the absense of eating or ‘fasting’.  This signals the body to start releasing the stored sugar (glycogen in the liver) into the bloodstream for use by muscle, brain and other organs.  This is called glycogenolysis (burning of glycogen) and happens most nights (assuming you don’t eat at night).
This fat storage process now happens in the reverse.  That is normal, since we have not eaten and insulin is only released when eating.  Stored sugar is taken from the liver and sent out to the body to be used for energy.  Fat is burned to release energy and sent out to the body if there is not enough stored sugar.
So this is what is happening every single day.  Normally, this is a well designed system that keeps itself in check.

Supposing we eat 3 meals a day from 7am to 7pm and fast from 7pm to 7am, you can see that we have balanced 12 hours of fasting with 12 hours of feeding.  Well-oiled machine.
You can easily see, however, that under conditions of sustained insulin excess, that you will tend to gain fat.  If insulin levels are always high, our bodies behave like we are always eating.  Store sugar and fat.
In response to the high insulin levels, we turn on the machinery to increase glycogen stores.  After this fills up, then we start to move some of this excess energy to fat stores.  If there is an imbalance between the feeding and fasting periods, this will lead to increased weight, increased fat and voila – obesity.
But the problem is that eating does not lead to sustained high insulin levels.  Let’s assume we eat 3 meals per day with no snacks.
Supposing we eat breakfast at 7 am and dinner at 7 pm.  That means that we have balanced 12 hours of eating with 12 hours of fasting.  There are periods of increased insulin balanced by decreased periods of insulin.  Even if we are to increase the peaks of insulin by eating lots of refined carbohydrates, it would still be balanced by the fasting period.
In the 1950′s and 60′s for instance, people ate plenty of pasta and white bread.  There were the same oreo cookies and Kit Kat chocolate bars.  Sugar intake was still high and people did not drink Diet Coke.  So americans were eating plenty of fattening carbohydrates but did not have the same problem with obesity.
But we always forget that proper food choices involves two main questions.  The first question we think about constantly – What to Eat??  Should we eat high carb, low carb, high fat, low fat, high protein, low protein.  Should we eat whole grain, more fibre, etc.
The question we always forget is When to Eat.  Meal timing turns out to play a very important role in the development of obesity as well.  In the above example, we are eating 3 meals per day with no snacks.  But that is increasing rare.  More and more, people are being told to eat 6 times a day.
In this situation, we are constantly stimulating insulin.  Insulin is the hormone of eating, so our sugar storage and fat storage machinery is revved up.  While the peaks of insulin are not as high, we have more persistent stimulation of insulin.  We have lost the balance between the fed state (insulin dominant) and the fasted state (insulin deficient).
In the previous example we have 12 hours of feeding balanced by 12 hours of fasting.  This is what Moms everywhere used to say.  3 meals a day, no snacks.  Snacking would ruin your dinner.  And this 1950′s and 1960′s advice was associated with low levels of obesity.  Now, we eat all the time and anywhere we want.
Eat in the car?  No problem.  Eat in the movie theatre?  No problem.  Eat at your desk? No problem.
What we now have is 16-18 hours of feeding and 6-8 hours of fasting.  We are told to eat all the time.  Eat 3 meals a day with 3 snacks in between.  Look at a typical schedule at school.  Eat breakfast.  Mid-morning snack (for that long period between breakfast and dinner).  Lunch.  After-school snack.  Dinner.  Snack in between soccer periods.  Snack at bedtime.  That’s a whopping 7 times a day every day.
This is our current advice.  And this dietary pattern is associated with much higher levels of obesity.
Continue here for Hormonal Obesity VIII
Begin here with Calories I
To see the entire lecture – The Aetiology of Obesity 2/6 – The New Science of Diabesity