I spend a great deal of time in my clinic dealing with the problems of type 2 diabetes. But occasionally, people ask about type 1 diabetes (T1D) as well. The reason why it is so rare for me is that I treat adult patients where T2D outnumbers T1D by at least 9:1. I was looking at a fascinating study that my friend, Ivor Cummins (The Fat Emperor) had alerted me to a few months ago. 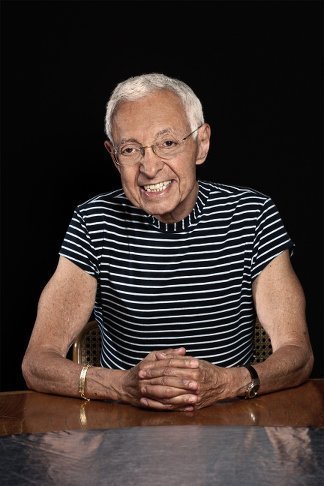 Dr. Richard Bernstein is a fascinating character. He had developed T1D as a child of twelve and began to have complications by his 30s.  He eventually went to medical school in order to learn better how to treat his own disease. Eventually he decided that the proper treatment was a low carb diet. This was in direct contradiction to the prevailing wisdom of the time (1990s), which included treating patients with insulin and a diet high in carbs.
Dr. Bernstein opened up a controversial clinic to treat T1D with a low carb diet and also wrote several best selling books discussing the same topic. Over the years, it has proven to be a safe treatment for T1D. While there are few long-term studies, Dr. Bernstein himself is living proof of the low carb T1D paradigm.
In many ways, T1D and T2D are exact opposites of each other. T1D typically affects children who are usually quite skinny. T2D typically affects adults who are usually quite obese. This is not absolute, and we are seeing much more T2D in children as their weights have increased. There are also cases of normal or even underweight patients with T2D. But in general, that is the case. T1D is the severe deficiency of insulin where as T2D is the severe excess of insulin.
Nevertheless, people often treat both types of diabetes in the same manner. Both are treated with medications or insulin to keep blood glucose in acceptable levels.
Wait, you might think. You must be off your rocker. How can you treat two disease which are essentially opposites with the same treatment? Isn’t that like treating anemia (too little blood) the same way as treating polycythemia (too much blood)? Or like treating vitamin D deficiency the same as vitamin D toxicity? Well, yes. For many reasons, I believe that the current treatment of diabetes is entirely incorrect.
Since T2D is a disease of too much insulin, then it is easy to see why you would treat it with a low carbohydrate, high fat (LCHF) diet. Since refined carbs increase insulin the most, and natural fats the least, you should eat more fat and less carbs. That makes perfect sense. But why would you want to treat T1D the same way?
If T1D patients have too little insulin, then why would you need to limit carbohydrates? You could simply give more insulin to cover the glucose raising effect of the carbs. For decades, and even today, T1Ds were told to eat a high carb, low fat diet. Why?
The main reasoning was this. Most T1D patients eventually develop heart disease and die of complications related to heart disease. The conventional ‘healthy heart’ diet was a very low fat diet. If you ate lots of fat, it would clog up you arteries and cause heart attacks. Therefore, the ‘best’ diet would be very low in fat, which meant a high carbohydrate diet. This high carb diet would mean that more insulin would need to be injected to control blood sugars, but that wasn’t so bad. Was it?
There were two main problems with this reasoning, and it has literally killed thousands of people. First, diets high in cholesterol and saturated fat turned out to have minimal impact on serum cholesterol or heart disease. Zoë Harcombe, obesity researcher and best selling author recently published an article in the British Medical Journal pointing out that there was no evidence to support the low fat diet. The Academy of Nutrition and Dietetics recently reversed its position on saturated fats and recognizes that they do not contribute significantly to heart disease.
However, it is still not obvious why a Low Carb diet should be so beneficial. The second great mistake was to assume that high doses of insulin are not harmful to the body. This turned out not to be true at all. Persistent high levels of insulin over many years leads to insulin resistance. That’s the crux of the problem. Not gluco-toxicity but Insulin Toxicity.
Let’s look at the EuroDiab Study. This was a prospective cohort of T1D patients from Europe. Compared to normal people, T1D have a 3 or 4 fold higher risk of dying. This is not especially controversial. But what was the reason? Most doctors believe that it is due to gluco-toxicity (toxicity of the high blood sugar).  The high blood sugar causes damage to proteins (AGE or Advanced Glycation End-Products), which then raise the risk of dying. If that was true, then very tight blood sugar control would be essential and also reverse the excess mortality.
In this study, a multi-variate analysis showed that there were several factors associated with this excess mortality. Gluco-toxicity in fact, did have a small effect as A1C was associated with a small higher risk (standardized hazard ratio of 1.18).  However, this was much smaller than the risk associated with the Waist-Hip Ratio (WHR), a standard measure of visceral fat.
This is the usually found in metabolic syndrome, which is insulin excess, not insulin deficiency. In other words – this is more typical of type 2 diabetes, not type 1. What is going on? 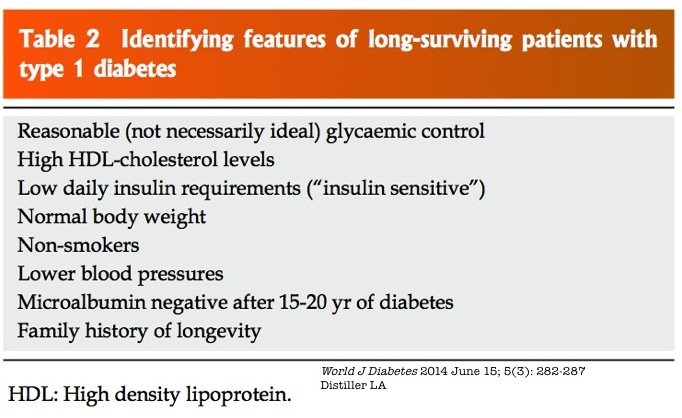 The ‘Golden Years Cohort‘ studied 400 T1D patients who lived over 50 years managing their disease. These were people who had obviously beaten the odds and survived. What was their secret?
The average HgBA1C was 7.6% – well above the normal of 6.0% and well over the target level of 7.0%. Some patients had A1C’s of 8.5-9.0% and still lived a long life. So, clearly, glucotoxicity was not the major player here. These people had ‘sub-optimal’ sugar control and it didn’t seem to matter.
Another paper “Why do some patients with type 1 diabetes live so long?” reviews some of the contradictory evidence. While some studies have shown benefit to low blood glucose, others have not. In reviewing the evidence, it appears that reasonable, but not necessarily ideal blood sugar control is needed. While glucotoxicity is a player, it is not a major player. What was the major factor in survival?
Low daily insulin requirements are significantly correlated with survival. This is fascinating. I have argued that high insulin levels leads to insulin resistance (type 2 diabetes). If this is true, let’s think about what is happening here.
In T1D, the conventional dietary advice is to eat a low fat high carb diet in the mistaken belief that dietary fat is bad for heart disease. The result is that more insulin is required to deal with the higher blood sugars (the dietary strategy of carb up and shoot up). This excessive insulin intake over years (persistent high levels) actually leads to insulin resistance, just as what happens in T2D in the normal population.
Over the decades of high insulin, type 2 diabetes develops in these patients with type 1 diabetes!  In fact, these patients have double diabetes, which is why factors like cholesterol, high blood pressure and high WHR all become increasingly important for T1D.
The cure for T1D led directly to T2D! It was the disastrous advice to eat a high carb, low fat diet. Instead, what would happen if you followed Dr. Richard Bernstein’s LCHF diet? You would dramatically reduce refined carbohydrates, which leads to much lower need for insulin. Blood sugars are controlled, but don’t need to be perfect. 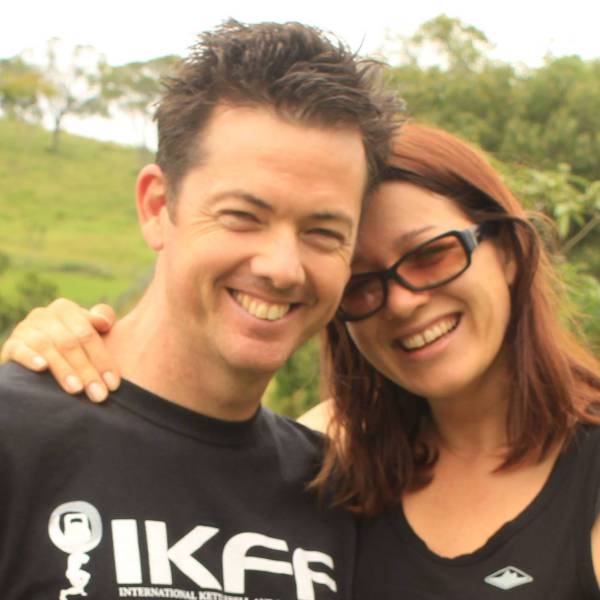 In other words, there are two toxicities to be aware of. The first, and less important is gluco-toxicity. The more important is the insulin-toxicity. It is the insulin itself, in high doses that is leading directly to insulin resistance and type 2 diabetes.
While T1D patients will never be completely off of their insulin, they would still be wise to listen to Dr. Bernstein and follow a LCHF diet to minimize the insulin-toxicity. Their life, very literally depends upon it.
One of the best online resources I’ve ever seen was written by Marty Kendall who details specific foods and their insulin effect. He has written an absolutely fantastic series of post on insulinogenic effect of foods, and well worth a look. It’s absolutely terrific stuff.
Interestingly, like Dr. Bernstein, Marty is also an engineer, who developed a specific interest in foods for type 1 diabetes because his wife suffers from this disease. By changing her diet to a low insulin diet, her health has dramatically improved with better control of sugars, improved energy and mood. Look at happy couple! So sweet, I could throw up. Excuse me…
The key here is the focus on eating foods that lower insulin requirements. This takes into account the carbohydrate content, protein, and fibre content of foods. This is a far more comprehensive measure of insulin requirements than a simple carb count, and therefore much more closely approximates the truth.