Why we’re losing the war (on Obesity, Type 2 Diabetes, and Cancer)

The first step to solving a problem is to admit that one exists.

I was recently sitting in a department meeting in my hospital, where we had recently raised over $1 million to fund a Centre for Integrative Medicine (CIM) in conjunction with the University. There was great fanfare when it began, a few years ago. The director of the program stood to present to the rest of the hospital what had been done over that year.
In that time, this entire department of 4 or 5 people had managed to do a survey, and took over a program where massage students were giving free massages to patients and staff. This was a program that had already been set up and running, but CIM took it over, which wasn’t difficult, since they were volunteer students. That’s it. In a whole year, they managed one program and took a survey about attitudes. Wow. I thought. That really sucks. In a year, 4 people managed to do work that it would have taken me about 1-2 days. That really sucks. But I didn’t say anything, because it wasn’t really my business.
After she sat done, other managers made some comments. “Great job”. “Congratulations, this is very exciting”. “Excellent work”. This was the gist of the sentiments shared at the table. This is generally how any bureaucracy works. Even though it was obvious that we had just pissed away $1 million dollars, we all needed to pretend that all was great. Nobody, it seems, wanted to yell “The emperor has no clothes”. Dissenting opinions to the prespecified narrative are not welcome. Rather than acknowledge the truth, everybody just wants to pretend everything is just fine, thank you very much. This problem is not unique to my hospital, but is pervasive in all of public health. We all need to pretend that everybody (the academic research community, doctors, dietitians, the nutritional authorities) is doing just great, even as we have an obesity and type 2 diabetes epidemic that dwarfs anything the world has ever seen. Nobody wants to admit there is a problem – and therefore we have not taken the first steps to solving it.

In the ‘war on obesity’ it is rather obvious that things are not going well. You can take any statistic about global obesity and it will be bad. For example, the CDC recently released obesity statistics for the United States. Yes, it was scary bad. No state in the Union had a prevalence of obesity under 20%. Only 3 states fell below 25%. Yikes. Tragically, in 1985, there was not a single state above 10%. Now, even the best state is double that. Logically, whatever obesity advice we are doling out to the general public on weight loss is not effective. This is the calorie-centric view of obesity as an energy balance problem, as if the human body is some kind of bomb calorimeter with better hair and makeup. Perhaps the low fat diet may even be making it worse – that’s debatable, but it sure ain’t making it better. If it’s not working, then we should change it. That’s logic, but that also means we would have to admit there is a problem. No can do. 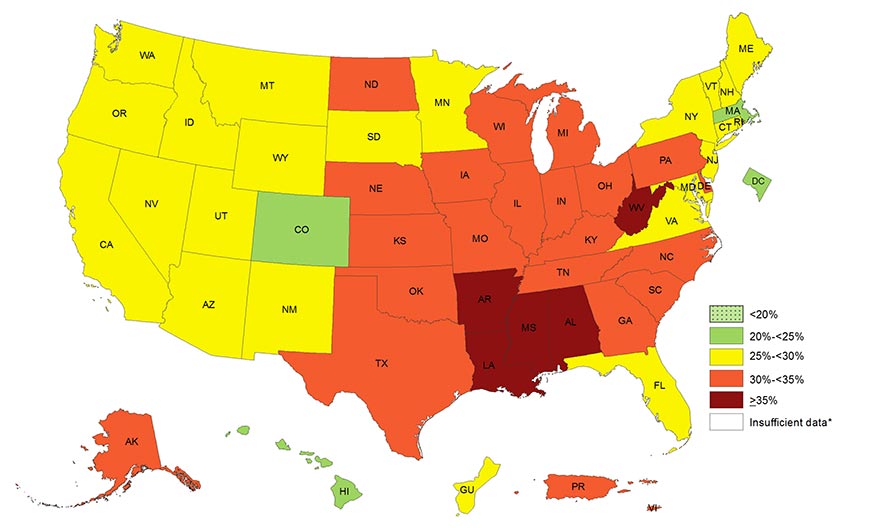 So, looking on the CDC website, what advice is being given? “To lose weight, you must use up more calories than you take in. Since one pound equals 3,500 calories, you need to reduce your caloric intake by 500—1000 calories per day to lose about 1 to 2 pounds per week.” Funny, that sounds like the same, old, tired advice that I heard, growing up in the 1970s.
Let’s look at it logically. Here’s what we know.

So, all the obesity specialists in all the universities conclude that we should… Keep giving the same caloric restriction advice? WTF? Are these people insane? The first step to solving a problem is to admit that one exists. The problem is that our advice is not useful or effective. Let’s face that hard truth and start moving forward. Instead, there are legions of ‘professionals’ and ‘academics’ who keep screaming that “It’s all about calories”. We’ve focused obsessively on calories (the body, of course, has no actual way of measuring calories) and it’s gotten us exactly nowhere. 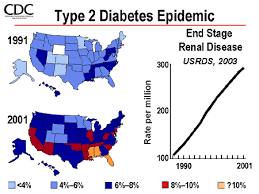 In type 2 diabetes, we see the same horrifying epidemic. However, in our treatment of type 2 diabetes, we pretended that if only we could give enough medications to normalize the blood glucose, everything would be just fine, thank you very much. So, we did studies to prove our point. The ACCORD, ADVANCE, VADT, TECOS and other studies all proved the same point. Yes, you could use medications to lower blood glucose, but no, people were not healthier for it. They died at the same rate. They got heart disease and kidney disease at the same rate. Taking the insulin and other medications were pointless. Sure, the drug companies made lots of money and the doctors got to feel good about themselves. But in terms of making patients healthier, no, sorry about it.
Let’s look at it logically.

WTF?? This is the same tired advice that I gave to diabetics in the 1990s. 25 years later, we haven’t advanced a single bit. The first step to solving a problem is to admit that one exists. If we do not acknowledge the problem that our current treatment approach is incorrect, we have no hope of correcting our course. We’ve focused obsessively upon correcting the blood sugar even as this approach has been proven to fail. Time to man up, and face it. But, that would mean we are deviating from the pre-specified narrative that ‘Everything is awesome’ and that our researchers and doctors are making brave progress against a terrible disease. Admit a problem? No can do.

The ‘war on cancer’ has gone similarly poorly. John Bailar III should know about cancer. He worked in the National Cancer Institute (NCI), was editor of the Jorunal of the NCI, statistical consultant to the New England Journal of Medicine and a lecturer at Harvard’s School of Public Health. He started wondering about the effectiveness of the entire cancer research program in the 1970s and left the NCI in 1980.  He wrote a piece in the New England Journal of Medicine in 1986 entitled “Progress Against Cancer?” From 1950 to 1982, there was not a single shred of evidence that medical advances had slowed down rates of cancer or deaths from cancer. If anything, the situation was worse than before.
In 1997, he published a follow up paper called ‘Cancer Undefeated‘ in the same journal. He made the same points as eleven years earlier, that the cold, hard fact showed that cancer as a disease was not getting any better despite the billions of dollars being poured into research. 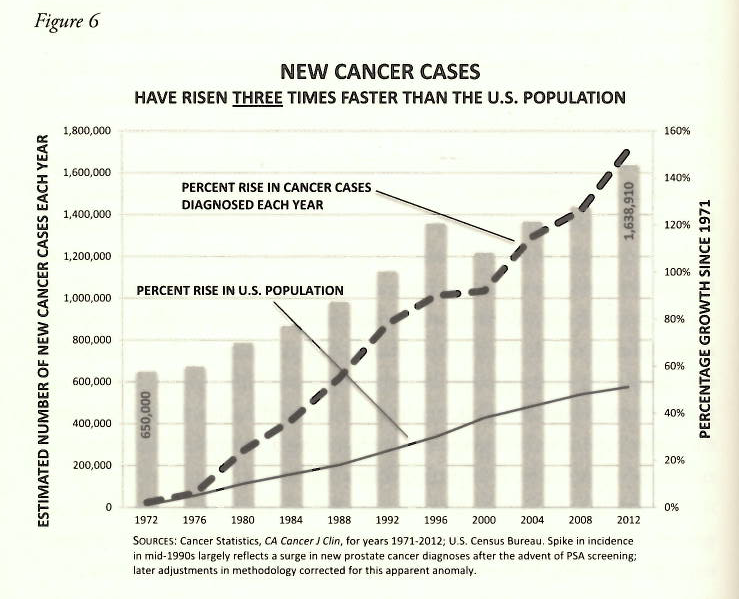 As an insider on the cancer wars, published in the most prominent journal in the world, here was somebody who yelled out ‘The emperor has no clothes’. The response was stark. He was almost universally reviled within the cancer research community. His motives, his intelligence were routinely called into question. Vincent DeVita Jr, the NCI director called his first paper reprehensible, irresponsible and misleading while implying that Bailar himself had departed with reality. While the personal attacks were plentiful, there was simply no denying the statistics. In the past 4 decades, the crude death rate other than cancer dropped by 24%. Cancer, though has increased 14%. Cancer was indeed getting worse. But nobody wanted to admit it. The first step to solving a problem is to admit that one exists.
In cancer, the past 50 year have focused obsessively upon the genetic mutations as a cause of the problem. While there have been some major advances in some relatively minor diseases (CML and Gleevec), in general, cancer is no more defeated than it was 50 years ago. This approach has gotten us a single step in a thousand mile journey.
Part of the problem lies in how cancer drugs are approved. The FDA approves drugs based on their side effects (toxicity) compared to their efficacy – which can be defined many ways. If drugs help cancer patients live longer then it has a great chance of being approved. This is probably the most important hard endpoint for drugs. Unfortunately, from 1990-2002, 75% of the FDA approvals were given for reasons other than making patients live longer.
The biggest reason for approval to market a medication was the ‘partial tumor response rate’.  This means that the primary tumor shrank in volume by over 50%. This sounds pretty good. What’s the problem with that? Well – it’s completely useless. Cancer kills because of metastasis. Once cancer spreads, it’s far, far more deadly. You need to kill just about 100% of the cancer in order for patients to survive longer.
That’s the reason that surgery and radiation are ineffective once the cancer has metastasized. Imagine that you have a surgical procedure to remove half of the cancer. It would be pretty useless. Every surgeon in the world would refuse to operate because it’s just stupid. And they would be correct. Getting half the cancer is no better than getting none of it. That’s why surgeons always tell patients optimistically, after surgery that ‘We got it all’. Surgeons will cut huge swaths of normal tissues out of cancer patients in their efforts to ‘get it all’.
Getting half the cancer is just pissing in the ocean. It makes not even a little difference to the overall outcome. Yet, over 50% of the new drugs available for cancer were approved based upon this completely useless efficacy measure.  71 approvals were made, based on this hurdle. However, some medications are approved from multiple cancers, each requiring its own approval, so 71 approvals only translated into 45 drugs. 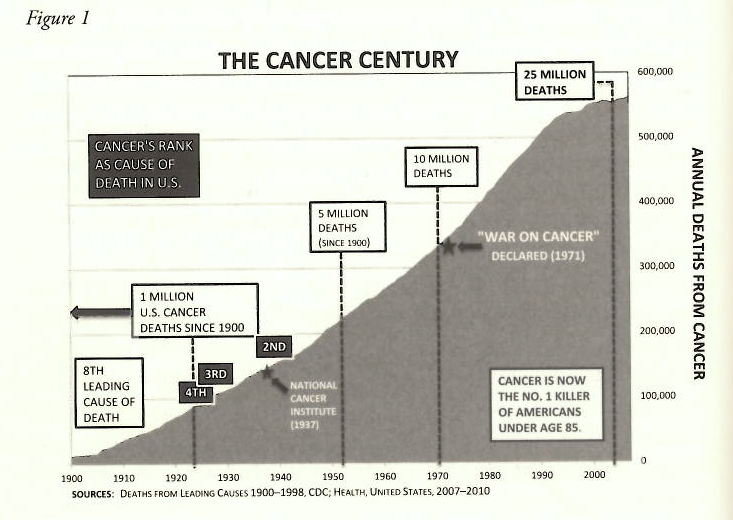 If you look at the more rigorous measure of actually helping save lives, only 12 medications managed to clear this bar in the 12 years from 1990-2002. The duration of life extension is generally only a few weeks or months in the majority of cases. In that same time, the phrase ‘cancer breakthrough’ appeared in 691 published articles. The strange math, according to the terrific, eye-opening book ‘The Truth in Small Doses‘ goes like this.